Giostra del Saracino – Joust of the Saracen in Arezzo

One of the Oldest Traditions in Tuscany and Arezzo

Among the ancient traditions that Tuscans love to celebrate is the Giostra del Saracino, or Joust of the Saracen (Moor) in Arezzo.

The Joust is held twice every year – on the third Saturday in June and on the first Sunday in September in Arezzo's beautiful Piazza Grande. Festivities start a week earlier when the captains take an oath, draw the sequence in which they'll charge and practice throughout the week in the evenings.

Dates in June and September

Two dates: the first is on the next to last Saturday in June (3rd or 4th Saturday on some years, check official site below for confirmation of dates) and the second on the 1st Sunday in September and both take place in Arezzo's beautiful Piazza Grande.

You can view a more detailed program on the official site here.

The whole city turns up in medieval costume to recreate the atmosphere of medieval Arezzo as the quarters of the city compete against each other in a joust to win the Golden Lance.

Today, there are 8 knights for the 4 quarters (quartieri) of the city - Porta del Foro, San Andrea, Porta Santo Spirito, and Porta Crucifera. Each knight gallops on horseback with a wooden lance and aims at the Buratto and its shield. The knight has two runs along the lizza (jousting track) that runs obliquely in Piazza Grande and is won by the quarter whose knights obtained the most points. Points are obtained by hitting the target on the shield. 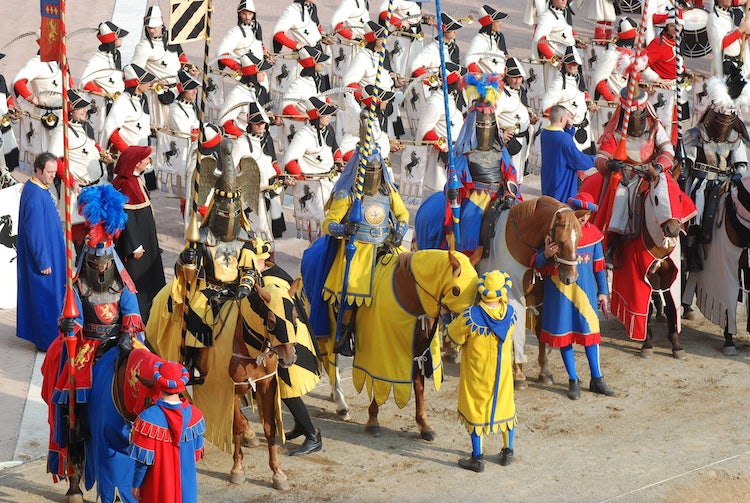 Who is this "Saraceno"?

The event has its origins in the Middle Ages, and it can be considered an evolution of the military training exercises for knights. It was supposed to simulate battle: the knights practiced using their lance on a “puppet” who represented the bad guy. During the time of the Crusades, the bad guy was the Saracens or Moors and thus the tradition began.

The "Buratto" symbolizes the King of the Indies, and he is armed with a shield in the left hand and this is the target. It is divided into 10 blocks where each block corresponds to a certain number of points. In the right hand, there is a “scourge” or whip with three balls attached to the end weighing about 250 grams. This is the only means of defense that the "Buratto" has, and if by chance he gets to use it and actually hits the rider (besides a good bruise) they get points taken off of the total.

How do they know if the jouster was hit? The balls at the end of the whip are covered in black powder which will leave a mark on the outfit of the rider.

In Medieval society, jousts and tournaments were the means to celebrate any special event and in Arezzo records indicate this particular one was very popular and repeated on special occasions. The tradition of the joust has appeared and disappeared throughout the centuries but has been occurring twice annually since 1931 (except for the years of World War II). 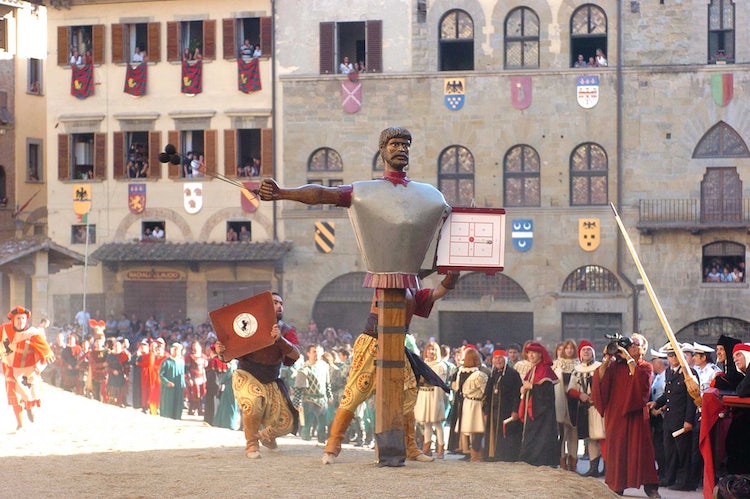 For tickets for the seated bleachers, you can book online on the official website; see sidebar for details. You can also wait and just head to Arezzo for standing spots in the main Piazza Grande.

In June, the day of the Joust starts at 7.00 am with the first mortar shot. At 11.00 am, the second one announces the procession of over 300 participants in historical costume. At 7.00 pm, there is the blessing of the jousters and at 8pm the procession goes from the Duomo to Piazza Grande. At 9.30 pm, just before the start of the tournament, there is a flag throwers demonstration, then the procession enters the square and finally the knights.

In September, the same rituals follow but the final tournament takes place a little earlier, at 5pm.

The Joust of the Saracen or Giostra del Saracino is a beautiful medieval festival that animates Arezzo every year with colors, sounds, and flavors from the Middle Ages. Head to Arezzo and go back in time!

Plan your itinerary with these fun activities...