Loro Ciuffenna and its Countryside

between Florence, Valdarno, and Arezzo

Just a short distance from the main highways and Florence, this little town sparkles with quaint roads, unique panoramic views and a history that is intertwined with Florence and more.

The road leading up to this small town seems to have been made with a motorcycle in mind: panoramic curves in every direction! Olive trees, glimpses of the valley below and all in the shadow of the mountains of Pratomagno. This enticing stretch sits about 320 m above sea level between Valdarno and Loro Ciuffenna and it will provide several photo opportunities. 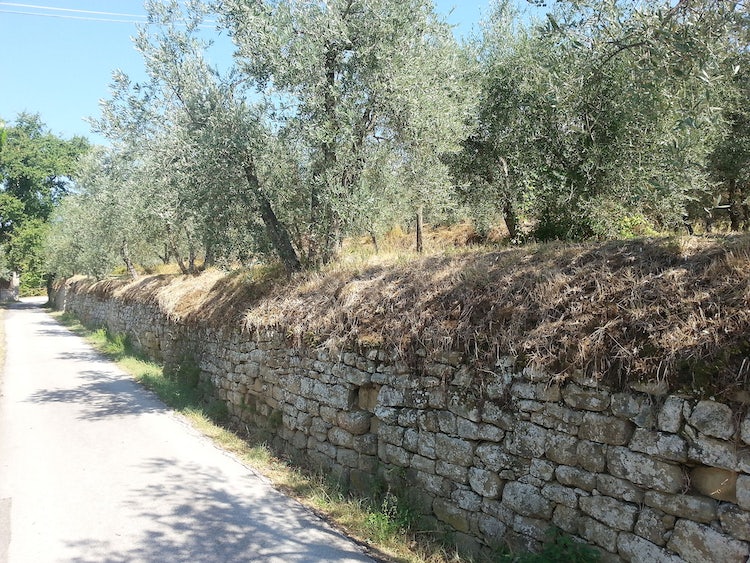 Origins in the Hills outside of Florence

Most definitely of Etruscan origin, the town was originally called just "Loro" which means laurel plants/trees. The word Ciuffenna, the name of the river that cuts the town in two and which provided power for the many mills that dot the hillside, was added much later in 1862.

There are also signs, even today, that the Romans were influential in the area. Just think of the road you used to arrive, the Cassia Vetus, known today as via Setteponti (the road of the seven bridges). This was an important thoroughfare which connected the Roman cities of Fiesole and Arezzo. 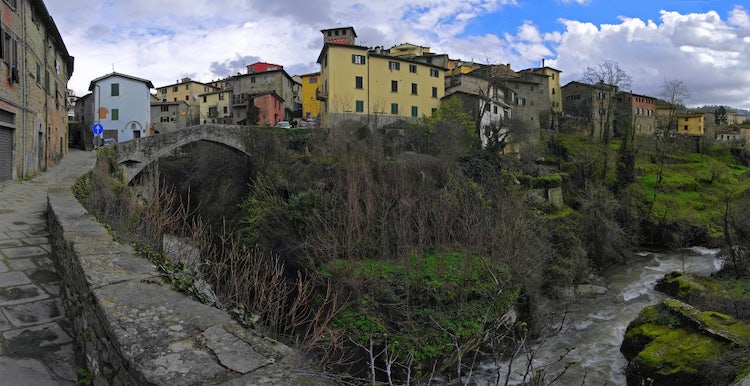 Though not on the via Francigena or even the via Romena, the town of Loro Ciuffenna flourished because of its closeness to Florence and Arezzo - where the rich people from the congested cities ventured out to establish a second home. The concentrated historic center and the well-preserved town buildings and streets earned it a place in the “Prettiest little Towns of Italy,” distinguishing Loro Ciuffenna as a place where you can walk around and inhale the atmosphere of years gone by.

Especially enchanting is that the town is built on a gorge, where the river Ciuffenna runs below.

Sites to visit in town:

This is one of the oldest working water mills in Tuscany and is still in use today to grind chestnuts into flour - a typical product of the area. It is believed that it was built around the year 1100 along the banks of the river Ciuffenna, what makes it especially unique is that it was in the city center. 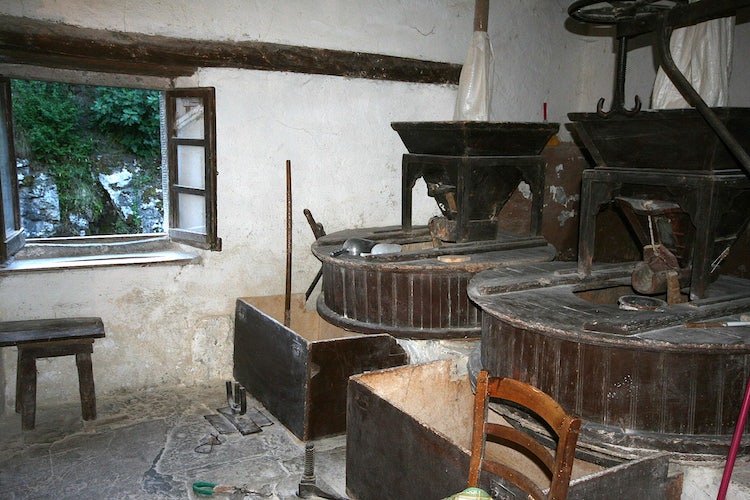 Probably replacing a Roman bridge in the same spot over the Ciuffenna, one of the bridges in the road of the seven bridges.

The government building houses art by contemporary artists and sculptures and highlights several drawings by Venturino Venturi, who was born in Loro Ciuffenna in 1918. Famous for many sketches, paintings and even ceramic works worldwide, he has won a special place in the hearts of the Tuscans for his Piazzetta dei Mosaici constructed at the Pinocchio Park in Collodi. Right next door to the museum you will find a delicious "geletaria" (Bar Sport Gelateria Al Ponte) grab a cone and continue to stroll the streets.

Set in a quiet little square, this church was once the private chapel of the castle of the Guidi family. Documents show that is was a parish church from 1275 until the XIV century when it was enlarged incorporating one of the walls' towers, probably with the arrival of the Florentines and the Medici rule. 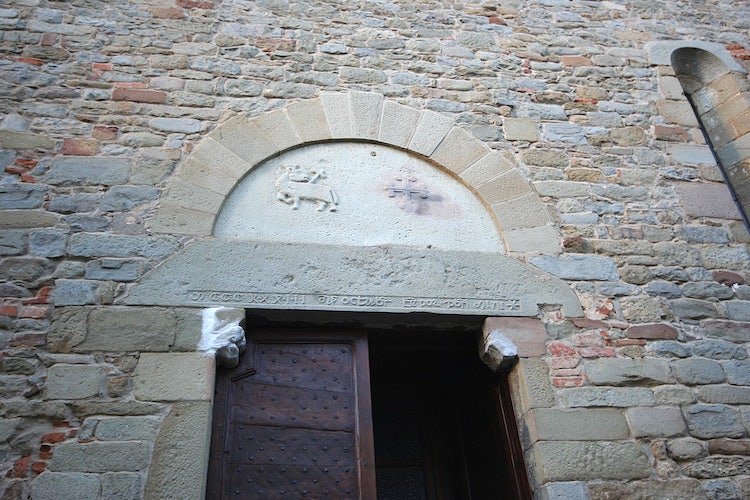 Outside of the city borders:

One of the most interesting examples of Romanesque architecture in Tuscany, the church dates back to the year one thousand. Actually, it was documented in 774, and we could go even further back because underneath the church there are the remains of a 5th-6th century church and one from the 8th-9th century.

Though the church is rich in artwork, perhaps the best way to truly appreciate everything is in silence, walking down the central nave and admiring the columns, the pulpit, and the many carvings. You will note that the church presents a rather stark decor - intentionally. The church was there for prayer and meditation and architects made sure that the interiors encourage tranquility and peace. 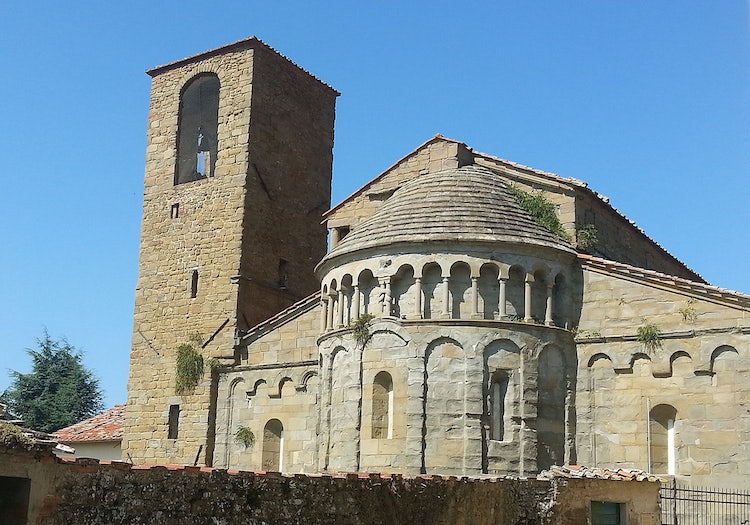 Definitely one of the most beautiful and fascinating landscapes of Valdarno: that which is believed to be the backdrop to the famous Mona Lisa by Leonardo da Vinci. The soft peaks are known as the “sandy Dolomites.” and has been declared a Protected Natural Area of Local Interest.

The Balze were formed, as has happened in Bryce Canyon in Utah, from sediment deposited by a lake in the Pliocene and Pleistocene, this lake was about 20 km long, occupying the current Valdarno. Over the millennia, when the lake has receded, its sediments have been subjected to a continuous action of erosion by the weather whom have models them until assuming the fascinating shapes known with the name of “Balze”.* 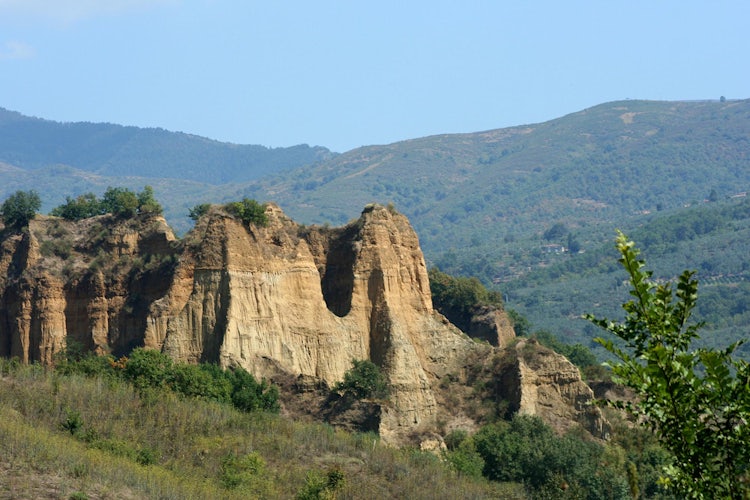 This area of Tuscany is included in the Chianti domination, and it is possible to do some wine tasting while cruising the backroads - ranging from vineyards owned by Ferragamo to organic/vegan wine growers. Be sure to book your reservation before stopping.

Famous not just for its wines, but also the stunning setting, the vineyards owned by Ferragamo offer a rather unique experience. The visit costs 20 Euro weekdays/25 Euros weekends and includes a video detailing the history of the farm, a visit to the prestigious art exhibition including pieces by Monet and Picasso, and a visit of the two cantinas (both the antique & modern) with a tasting of a 6 wines/liquors (a white, 3 red, a vin santo & a grappa). Every day there are two time slots for a visit: one at 11 am and another at 3 pm, but it is best to call and reserve your spot. 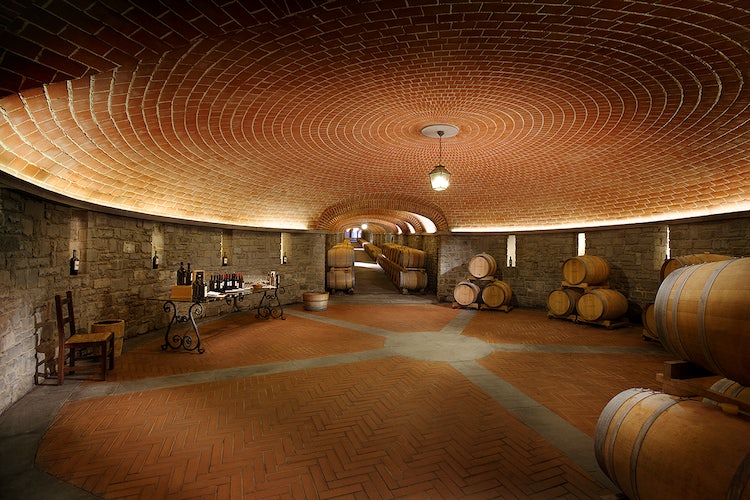 Diversity, Integrity, Community are their keywords

This organic vineyard is one man's interpretation of the grapes the Valdarno area grows. There is a tasting room only 5-6 km from the center of Loro Ciuffenna, a comfortable and inviting setting where you can learn about their wines and savor their organic flavors. It is possible to choose a tasting of 2 wines (rosè & red wine) for 7 Euro, 4 wines (rosè & 3 red wines) for 12 Euro and upon request, you can make it a tasting of the local products, including cheese together with the wine.

This is a family run farm which cultivates not just grapes but also other local specialties including a particular type of white bean. It is possible to view their vineyards, the cantina and a taste of the wines. Available at the moment are 2 white wines and Sangiovese Val d'Arno di Sopra D.O.C. for you to taste. 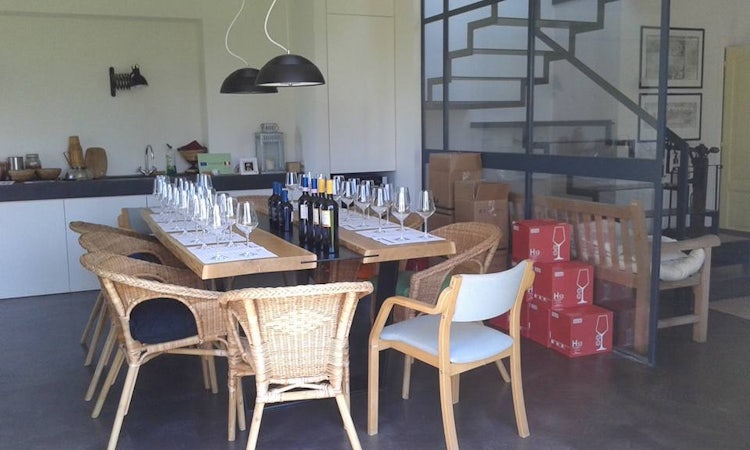 How to Get o Loro Ciuffenna

Coming from either the north of the south, the easiest route is the Autostrada del Sole (A1) exit at Valdarno and follow the SP11 (and signs to Loro Ciuffenna)

However, there is a rather panoramic route, starting from Arezzo following the via Setteponti / Cassia Vetus or indicated on the map as SP1, which will wind you through the picturesque landscape.

You will find free parking easily marked at the base of the city and stairs nearby for walking into town and the narrow but charming vias. 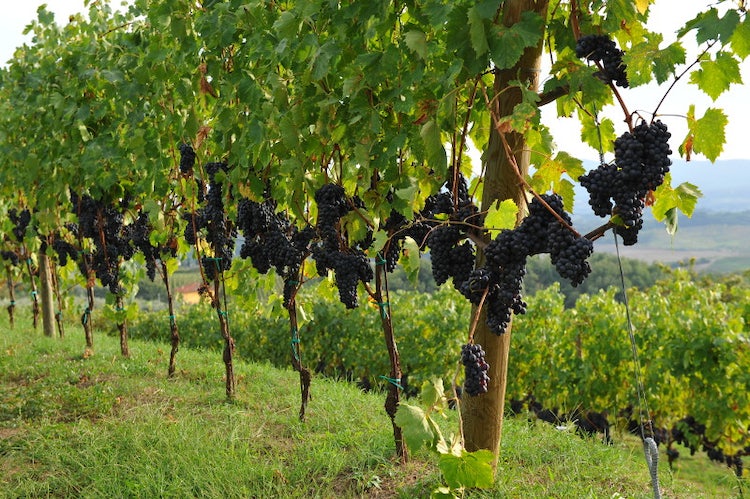 Arezzo is rich in everything Tuscan: Etruscan,...