White and Black Truffles in Tuscany

Also Known as the "Golden Mushroom"

Truffles are such a well-kept secret that even the Tuscans don’t always appreciate the gold mine they have growing (almost literally) in their backyard.

You have heard of the golden egg... well, here we have the golden mushroom! With a flavor that ranges from strong and intense to pungent (for some). The truffle finds itself in a situation where you either love it ... or you don’t.

But in either case, it remains one of the most traditional of Tuscan products. And, it is quick to select as a gift item to take home and, with a few easy recipes, you can make the most of this treasure to amaze friends and family with your culinary prowess.

Getting in the Truffle Zone: Where to go for Truffles in Tuscany

Those that work with truffles will tell you: truffles are a bit like diamonds in their particularities and personalizations. Even within the same species “family”, you will find that size and shape can make a huge difference in the flavour.

Without a doubt, Mugello and the hills of San Miniato are crème de la crème as far as quality goes for truffles.

Though some areas of Tuscany are definitely well-known in the international circuit as major suppliers, there are quite specific zones which excel in the harvest of this underground mushroom. And I don’t say underground mushroom in the sense that it is avant-garde or bucking the system.

Nope, the truffle is classified as a mushroom that grows underground, specifically around the roots of trees. Truffles prefer to grow in the hills which are well covered with oaks, hazelnuts, pines, and other similar trees. These tasty little morsels can be found in six zones throughout Tuscany, covering the various corners and diversity of the terrain.

These are the picturesque hills that extend to the north of Florence where the white truffle grows quite well. The tartufaie (translated: truffle hunters... because, yes, this is a serious profession) search for white truffles in the valley of the Mugello near the river beds, in particular, the Sieve and feeder rivers from the east side that run north-south. If you are looking to taste a bit of the local fare, there is a festival in Barberino di Mugello the last weekend of October or Scarperia the first two weekends in September.

Though they do not produce the most prized truffle, they have a more constant production especially in the more tourism-heavy seasons, and not only is it perhaps easier "to grow" but, it is generally a bit easier for the less discerning palate. It appears that the marzuolo enjoys a sandy soil found along the coastal area of Tuscany in the Maremma where they produce a steady crop. Since this area harvests the truffles in a different season they celebrate more towards the summer: Civitella Marittima and Castell’Azzara have festivals in July.

This covers an area that straddles Florence and Pisa and is traditionally known as one of the most prominent producers of truffles in Tuscany. San Miniato sometimes called the "City of Truffles", supplies a large number of truffles to all of Italy as well as holding an important fair & market for those looking to buy and experiment, which take place over the last three weekends in November. You will find similar festivals in Montaione (October), Montespertoli (March), Volterra (March, July & Oct/Nov), and Certaldo (March).

In the predominantly forest-covered area between Florence and Arezzo, there are a wide range of truffles including the more prized white (though the locals in Casentino seem to be more in tune with the mushrooms that grow above ground: mainly porcini). In summer, Chiusi della Verna (August) celebrates the "Scorzone" truffle and there is the fair/market in Arezzo the first weekend of September.

In the province of Arezzo towards the center of the province, especially cities like Anghiari and Badia Tedalda, they are extremely serious about their truffles, although they certainly make a lot "less noise" than many other areas. You will find many restaurants offer specialty dishes using the truffle. Special events in this area are held from the second weekend of October until the middle of November, in the small town of Badia Tedalda at the Ristorante il Sottobosco.

In southern Tuscany, the Crete Senesi in the province of Siena produces white truffles. This wild and scenic territory is a true treasure trove of flavors and photo opportunities... and now you can add truffle hunting to the list. This specialty is celebrated in several autumn fairs in the area, but especially in San Giovanni d'Asso where you will find festivals on the second and third weekend of November for the white truffle and again in March for the marzuolo truffle. If you are not in the area for the festivals, you can still stop by the sensorial Truffle Museum where you can explore truffles with all of your senses.

Each type of truffle has a distinct flavor and personality, varying in weight, size, fragrance, and use in the kitchen. There are six types of Truffles which can be collected and the official harvest time is regulated by the region of Tuscany. Below there are four of the principal products.

Watch the dates if you are looking to purchase fresh truffles to make your own meal while visiting the area so you know they are fresh and authentic.

The king of Truffles and one which Tuscany happens to grow quite well: The tartufo bianco pregiato (the prized white truffle) found usually from September 10 to December 31 is predominantly found in Mugello and San Miniato. This particular truffle can cost up to 3000 Euros a kilo!! A bit outside of most budgets but the flavor is intense and fragrant, and it is best used shaved raw over a hot dish.

The tartufo marzuolo (the White-ish truffle) found from January 10 to April 30.  It is not indicated for long term cooking because it loses its flavor the more you cook it. The perfume is softer and makes a perfect base for mixing and combining flavors.

The tartufo nero pregiato (the prized black truffle) found usually from November 15 to March 15. There are many who prefer the softer fragrance of the black truffle, but this is absolutely a personal choice! The flavor goes well with meat and it allows for longer cooking times. A variation on the above named black truffle is the tartufo brumale (the black winter truffle) which can be found from January to March and is distinguished for its extremely strong flavor.

The tartufo scorzone (or the black summer truffle) is widely available from June 1 to November 30. Its name comes from the rough, wrinkly outer crust. Not considered one of the prized truffles, it still mixes well with other flavors and is readily available, particularly during the summer months. If you are visiting near Florence in June, then you can stop at Rignano sull’Arno for their celebration of the scorzone truffle. The tartufo uncinato is very similiar in appearance and flavor to the scorzone and is normally found from October to December. It has the flexibility that it can be used when cooking without losing its flavor as well as being consumed raw. 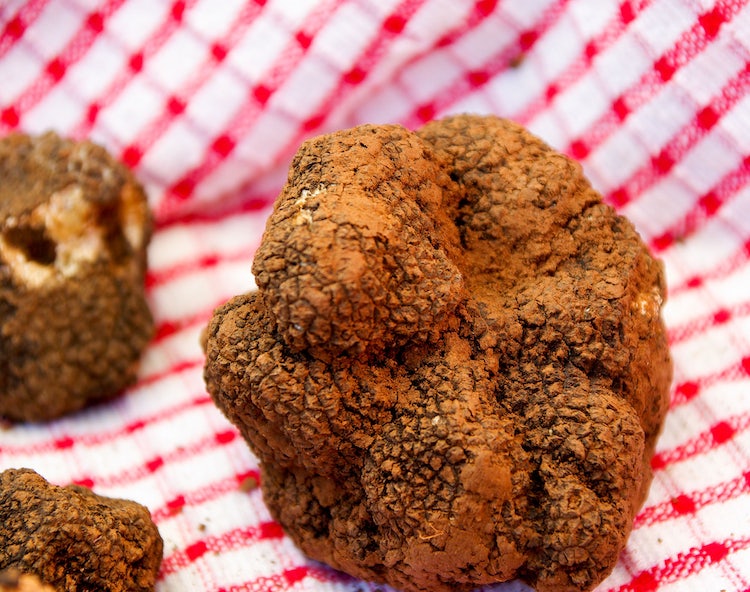 There are several opportunities in Tuscany to join in on the hunt. Though many areas are experimenting with cultivated truffles, it appears only the lesser prized mushrooms respond to farming whereas the more prized species still prefer to avoid man’s intervention.

Professional truffle hunters, along with their faithful companion, are available to show you where and how they search and harvest. Since truffles grow under the dirt and display no foliage above ground, hunters need a companion with a very keen sense of smell. Dogs are the partner of choice, however, there are other animals that work just as well.

In fact, many will tell you that the pig is excellent because they don’t need to be “trained” to look for the truffle - they already know the scent... but the downside is they are more likely to eat their find! 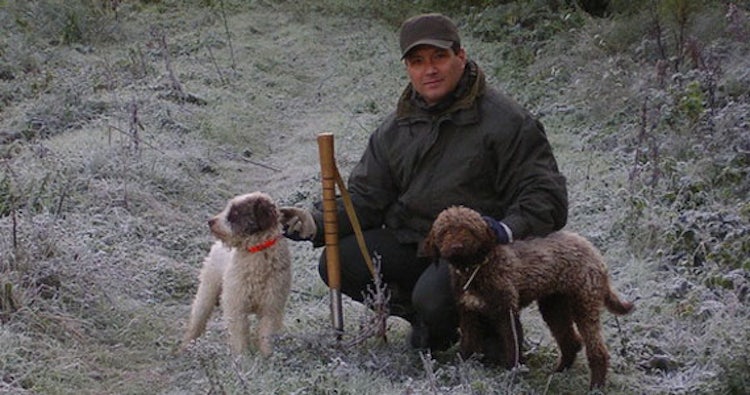 The market definitely provides a wide variety of oils, creams, sauces, and sometimes even fresh truffle products. However, a word of caution: truffles don’t often lend themselves to these types of transformations.

This means you should check the label for the word “aroma” - which implies a synthetic flavor. This doesn’t mean the product is not good or aromatic but, it does suggest that the product is not made with “real” truffles. Fresh truffles can be conserved for a short period of time in the refrigerator and wrapped; however, they are best used within 5-6 days of their harvest.

If you are here in the fall months and particularly in November, make sure to check out local festivals dedicated to truffles! 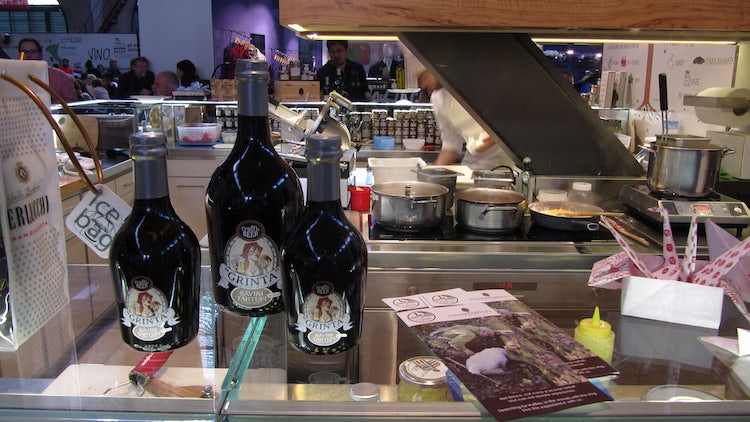 Perhaps the most common product is infused extra virgin olive oil. Many truffle products can be a bit “pricey”, however, keep in mind that normally for seasoning, you only need a few drops for the flavor to permeate your dish. There are several variations on spreads that will make use of the pulp of the truffle and which are delicious served on toasted bread. 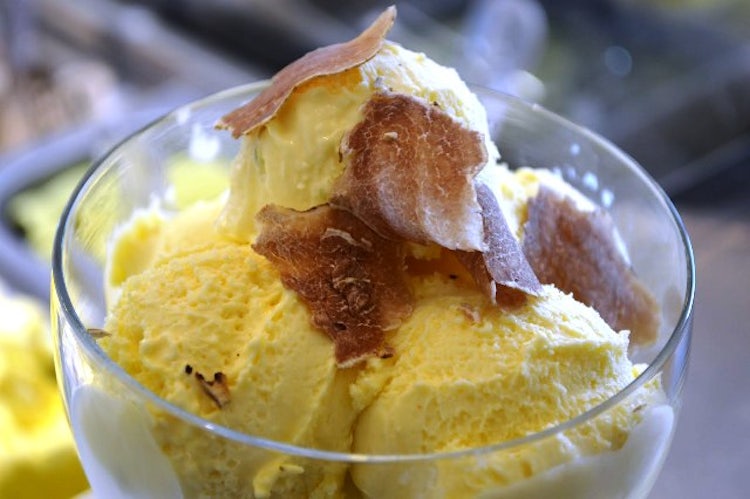 I went straight to the Central Market in San Lorenzo where Savini Tartufi has a stand that offers fresh-made delicacies with truffles in various recipes and flavors.  While the chef was busy tossing the taglietelle pasta with a creamy parmigiano cheese sauce and grating fresh truffles on top, I had a few questions for Silvia.

The burning question was: what is the best way to eat truffles?

Apparently, if you love them, then truffles go well with (just about) everything - pasta, pizza, and even a bistecca Fiorentina. For those who are lucky enough to have fresh truffles, then there are two dishes which are classics: fresh farm eggs cooked sunny side up with slivers of truffles shredded on top or risotto in bianco, white risotto again with truffles sliced on top.

Since it is not always possible to find fresh truffles, Silvia suggested two favorites with their shoppers: a creamy Parmigiano cheese sauce flavored with truffles. Obviously, it is even better with fresh truffle shavings...but not necessary to enjoy the dish. The second idea is a pesto sauce with truffle pulp added to it... all you need to do is open and add to your pasta. 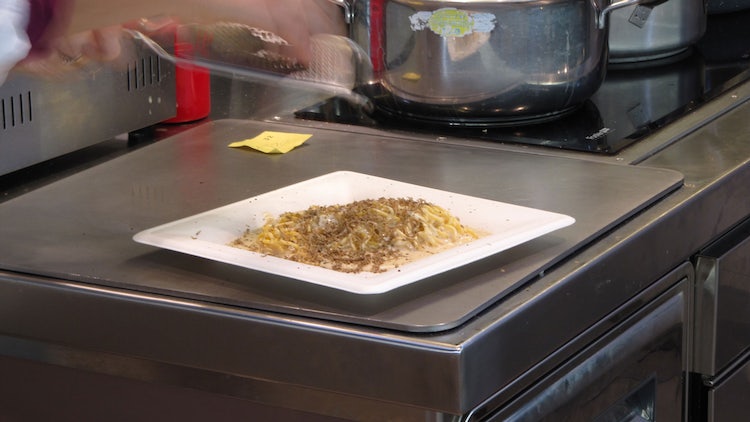 A virtual guide to typical Fall products of Tuscany with events,...

A journey through the pleasures of traditional pastries and sweets...

Shipping wine, packing wine in your baggage or...