MAEC, the Etruscan Academy Museum of the City of Cortona

The museum is laid out over 4 floors of the palace, two below ground that were one time used as prisons. To visit all of the rooms at a calm pace, we suggest at least planning to spend an hour and a half at the museum.

This area is a perfect base to explore all of southern Tuscany. Check out rentals by owners reviewed by our team and book your stay direct at the best prices.

The course through the museum starts in the basement levels where you'll find the Museum of the Etruscan and Roman City of Cortona.

The first two rooms introduce visitors to prehistorical times in the Chiana valley (Valdichiana) with the remains of prehistorical animals discovered in 1960 in the area near Farneta. During the archaeological dig, large mammal fossils were also discovered, including platforms of Megaceroides obscurus, fragments of hippopotamus and a pair of large molars of Mammuthus meridionalis which are now conserved in the museum. The remains of a 4 meters tall elephant are instead found at the Archaeological Museum in Florence. 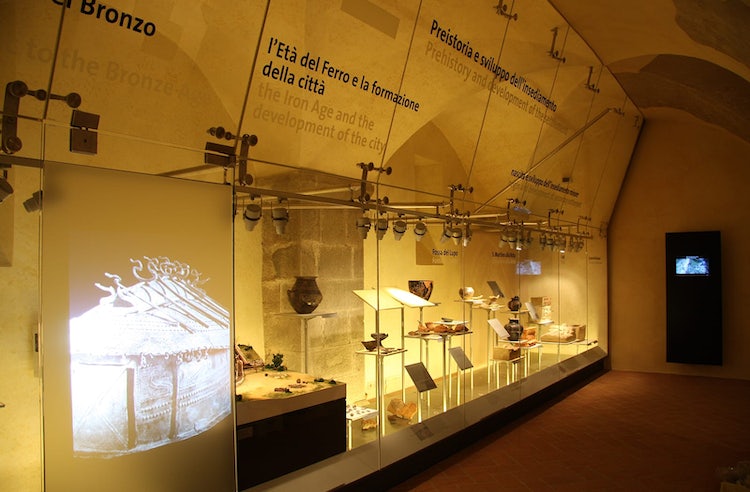 Continuing along through the rooms, it is possible to view numerous artifacts from the Paleolithic and Bronze Age up to the Iron Age (including arrowheads in both stone and bronze, as well as other items in bronze and copper and fragments of pottery).

Rooms 4,5 and 6 are dedicated to the archeological finds from the barrows (Etruscan tombs) of Camucia and Sodo (two of the main archeological sites in the area) also known as "the Melons". The grave goods found within the tombs demonstrate the lifestyle and opulence of the ancient princes which were buried with vases, papyrus, goblets, pieces of gold and other objects which served to protect as well as smooth the deceased's journey into the afterlife.

There are numerous items displayed, including many from the necropolises of Trestina, Bettolle and Foiano della Chiana. We found the mosaics from the Villa of Ossaia at La Tufa to be particularly beautiful.

The noble floors of the palace host the Museum of the Etruscan Academy where the exhibition does not follow a chronological or thematic order. Instead, items are organized by the development of the Academy, from its foundation in 1727 up to today.
There are numerous books, manuscripts, ancient finds, art and handicraft objects which make up the collection, including original items from the founders' collection as well as many items donated through time.
One can admire several paintings by Tuscan artists from the 13th to the 19th century, including an oval painting by the Cortona artist Luca Signorelli of the Virgin Mary with Child surrounded by Saints, which is one of the most interesting in the collection.

Experience Cortona in a special way

Wtih a guided tour of the town, with a cooking class or as part of a tour that takes you around the area, particularly useful if you don't have a car!

A small room of the museum is reserved for a very special find: a beautiful bronze chandelier dating back to the Etruscan period between the 5th-6th century BC found in the countryside near Cortona.

The Egyptian collection stands out among the rest of the Academy's finds, a result of a donation by Monsignor Corbelli, a native of Cortona that served as Apostolic delegate to Syria and Egypt. Among this collection you'll find a valuable small boat showing the deceased in his journey to the afterlife, two well conserved mummies and two richly decorated sarcophagi.

The MAEC is accessible to disabled persons who will find an elevator and small lift to move from floor to floor. At the ticket office, a guide in Braille is also available and throughout the museum there are small tactile stations set up for blind visitors.

The Uffizi Gallery is one of the world's top art museums - it...

The Accademia houses Michelangelo's David, easily the most famous...

Primarily a sculpture museum, you'll be treated to early...