The Tuscany of Your Dreams

The beautiful and untouched landscape is the absolute protagonist in Valdorcia.

This area of Tuscany boasts of endless rolling hills covered with grain or sunflowers, a rich green valley which encompasses the Orcia river, from which the zone derives its name, and don’t forget the vineyards for the renowned wines of Brunello and the newcomer on the market, the Val d’Orcia DOC. It is no wonder that this territory, which stretches along the provinces of Siena and Grosseto, is protected as a World Heritage Site by UNESCO. 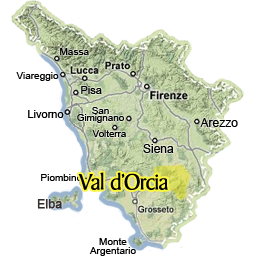 Time seems to slow down for picturesque towns like Pienza, a real jewel known as the "Ideal City" and the beautiful Palazzo Piccolomini. Or the little town of Castiglion d'Orcia with its fortress. At the furthest southern most point there is the hilltop town of Radicofani with its imposing castle tower or go west, towards the walled medieval city of Montalcino and the vineyards of Brunello. A must-see is the beautiful and suggestive Romanesque Abbey of Sant' Antimo, one of the best examples of medieval monastic architecture.

After a day visiting museums, ancient abbeys and castles, you can relax yourself in one of the many thermal baths of the region, such as the ones in Bagno Vignoni or in Bagni di San Filippo.

This region is very rich in high quality local products such as the "pecorino" cheese of Pienza (a typical cheese made with sheep's milk), the genuine olive oil, the gorgeous wine resulting from a long and ancient tradition, saffron, mushrooms, chestnuts, truffles, game and a lot of other specialties along the wine road.

A vacation in Valdorcia is a special journey between sweet tastes and marvellous panoramas that you will never forget. The most beautiful photos you see of Tuscany come from this paradise!

The Renaissance city of Pienza is a must-see destination in the Valdorcia. What to see? The beautiful hilltop town in southern Tuscany is small, here is our list of what you should see and do while in Pienza.

What to see and do in 24 hours in Val d'Orcia

The magnificent Val d'Orcia represents Tuscany across the world: gently rolling hills, vineyards, cypresses, medieval hilltop towns and castles. Here's our suggestions on how to organize a day through the area and see the top sights.

7 Reasons to Base Your Vacation in Val d'Orcia

Art, history, nature & wine are the obvious reason why you should make Val d’Orcia in Tuscany your base for holiday accommodations. But we got a few extra you might not even realize, read here for great reasons from experts who live in Tuscany.

Spending a day in the Val d’Orcia? We highly recommend enjoying a lunch or dinner here as you explore the small medieval town near Pienza. Take time to also stop outside of the town to enjoy breathtaking views of the Tuscan landscape.

Montalcino: A town & its Wine

Don’t miss the magnificent Montalcino, the city of the great Brunello wine, on your vacation to Tuscany. Here are our suggestions on what to see and do in Montalcino.

The UNESCO World Heritage territory of Val d’Orcia is one of the magical places to explore while on vacation in Tuscany. The landscapes, with its small picturesque towns and rolling hills, call to you, as well as the delicious wines created in the area! Check our list of wineries to add to your wine tasting itinerary in the area.

San Giovanni in Poggio - Immersed in the Crete Senesi

This beautiful rural home of San Giovanni in Poggio has been recently renovated and offers five fully equipped apartments. There is a large swimming pool for guests, all modern amenities such as washing machine and dishwasher in each apartment and a panoramic view of the wonderful landscape of the Crete Senesi.

Wonderful panoramas, great wines and quaint medieval villages to explore: this is the Valdorcia and this is Montepulciano! Set amidst those rolling hills that chatracterize the Tuscan outline, a few steps from Siena, Pienza and Montalcino, Montepulciano is like an amalgam of the best that Tuscany has to offers. So what are you waiting for? Venture out to the discovery of this marvellus town and taste a glass of its Nobile wine!

Discover the beautiful outdoor hot springs at Bagni San Filippo in southern Tuscany along the eastern skirts of Monte Amiata. Hot water at the source makes it possible to bathe even in cold seasons - and the spectacular White Whale needs to be seen and enjoyed!

Located just outside Buonconvento, Podere Cunina has spectacular views over the beautiful Tuscan countryside and of the medieval village of Montalcino. It is the perfect base from which to visit Siena, the Valdorcia, Chianti and Tuscany in general but, most of all, enjoy the warmth and welcome of the Freddi family into their home.

The zone for Brunello wine is concentrated in an area around Montalcino, filled with small towns, magical landscapes and vineyards of all sizes. Browse our list of vineyards and add some of our top choices to your wine tasting itinerary in Montalcino.

From 1982 to 2013, UNESCO has added 7 places in Tuscany to the World Heritage Sites List: follow along with us on a journey through the amazing art, culture and natural landscape of Tuscany to the discover the rich heritage Tuscany holds for all of us.

Monte Amiata, the highest mountain in the south of Tuscany, offers activities year-round as well as a wonderful view over the Val d'Orcia from its peak.

Visit the beautiful Abbey of Sant'Antimo

If you are near Montalcino, make sure to head to and visit this beautiful Romanesque abbey said to be from the time of Charlemagne. Its beauty will enchant you!

Agriturismo I Pianelli: Plan your Home Base Near Siena

Looking for the ideal base for your holidays near Siena? Agriturismo i Pianelli immersed in the tranquil & untouched countryside near Murlo and Val d’Orcia offers the perfect family-friendly solution. Find out why this is where you want to be...

Read More about I Pianelli
accommodation

Typical Tuscan decor with a fireplace in all 6 self catering holiday apartments creates a special atmosphere & base for your vacation near Siena, free thermal pools, the via Francigena & the vineyards of Montepulciano.

Tuscany is like Alice's Wonderland: it never ceases to surprise, tourists and locals alike. Hot springs are a must to enjoy both Tuscany's beautiful landscapes as well as nearby cities, no matter what the weather might be like. Don't wait, and include a stop at one of Tuscany's many hot springs and spas this winter, sprimg, summer or fall!

Extinct But Not Dead: Amiata Volcano in Tuscany

Thermal water spas are a refreshing reprieve in a hectic schedule touring the Tuscan countryside. Tuscany and its extinct volcano, Amiata, provide the heat for the many hot springs where one can enjoy the revitalizing and sometimes healing waters.

Would you like to stay in Montepulciano and have wine shops, cafes and restaurants just minutes away? With free parking nearby, the Politian Apartments are perfect for exploring the town as well as the famous landscapes of the Val d'Orcia area and its wineries. The self-catering apartments are suited for 2-4 guests and offer stunning vistas and private outdoor garden terrace area.

Revolving around horses, the estate offers deluxe accommodation, on-site restaurant, Spa and related services as well as horseback riding lessons and rides across the countryside. All in the stunning context of the Val d'Orcia with incredible views in every single direction.

Bagno Vignoni is the most famous hot springs location in the Val d'Orcia, the splendid UNESCO area to the south of Siena, famous for its unique central square, a large basin with water from the hot springs!

Since we get asked often where we recommend staying in this area, here are our top picks of vacation rental apartments and hotels for the area!

A day trip around Siena should include this picturesque town only 25 kilometers to the south and easily reached by car or train. It is a prime example of architecture, landscapes and good wine from inside the heart of the Creti Senese.

In southern Tuscany, near the border with Umbria & Lazio on the skirts of Monte Cetona, the Montefreddo estate offers elegant and exclusive lodgings in a private villa and villa apartments. With simple modern furnishings combined with traditional country decor, the villas with private pool, ample gardens and A/C offer the perfect setting for a relaxing stay in Tuscany amidst organically grown vineyards and olive groves.