Siena, A Step back to Medieval Tuscany 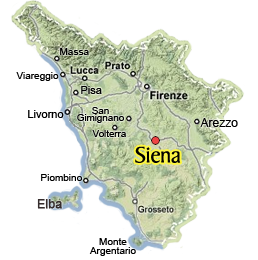 Siena is likely Italy's loveliest medieval city, and a trip worth making even if you are in Tuscany for just a few days. Siena's heart is its central piazza known as Il Campo, known worldwide for the famous Palio run here, a horse race run around the piazza two times every summer. Movie audiences worldwide can see Siena and the Palio in the James Bond movie, Quantum of Solace.

Siena is said to have been founded by Senius, son of Remus, one of the two legendary founders of Rome thus Siena's emblem is the she-wolf who suckled Remus and Romulus - you'll find many statues throughout the city. The city sits over three hills with its heart the huge piazza del Campo, where the Roman forum used to be. Rebuilt during the rule of the Council of Nine, a quasi-democratic group from 1287 to 1355, the nine sections of the fan-like brick pavement of the piazza represent the council and symbolizes the Madonna's cloak which shelters Siena.

The Campo is dominated by the red Palazzo Pubblico and its tower, Torre del Mangia. Along with the Duomo of Siena, the Palazzo Pubblico was also built during the same period of rule by the Council of Nine. The civic palace, built between 1297 and 1310, still houses the city's municipal offices much like Palazzo Vecchio in Florence. Its internal courtyard has entrances to the Torre del Mangia and to the Civic Museum. If you feel energetic, a climb up the over 500 steps will reward you with a wonderful view of Siena and its surroundings. The Museum, on the other hand, offers some of the greatest of Sienese paintings. The Sala del Concistoro houses one of Domenico Beccafumi's best works, ceiling frescoes of allegories on the virtues of Siena's medieval government. But it is the Sala del Mappamondo and the Sale della Pace that hold the palaces's highlights: Simone Martini's huge Maestà and Equestrian Portrait of Guidoriccio da Fogliano and Ambrogio Lorenzetti's Allegories of Good and Bad Government, once considered the most important cycle of secular paintings of the Middle Ages.

Siena's Cathedral - The Duomo in Siena

Siena's Gothic cathedral is full of treasures, including its marble pavement, Piccolomini library frescoes and incredibly ornate interiors. We highly recommend a visit into this wonder of Siena's past!

Discover the genius of Ambrogio Lorenzetti

In this marvelous 3 month exhibition spread across Siena, you'll get to discover the genius and beauty of the creations of Ambrogio Lorenzetti, an up to now largely unknown 14th century artist. Known for his "Good and Bad Government" fresco style in Palazzo Pubblico, there are more works to discover!

Siena strikes your heart from the first time you visit it, making you fall in love. Located in the heart of Tuscany, the city is easy to reach and is suitable for a day trip - although 24 hours or less is really not enough to see all that it offers! Here are some must-see spots we recommend to see in Siena if you only have a day, but if you have the time, spread them out over 2 days.

List of all lodgings in Siena and in the surrounding area: Farmhouses, B&B, hotels and apartments with detailed description and high resolution photos. All holiday rentals offer direct contact with the owner or online booking.

Magical & enticing, even the most active visitor will want to take a few extra minutes to bask in the Tuscan sun, watch the shadow of the tower move across the square like the hand of a large clock and soak in the special atmosphere of Piazza del Campo.

Admire it from below or climb it to the top, this is one stop you don't want to miss in Siena.  The iconic tower is a beacon for those who are in the city or travelling in the countryside.

Walks in Siena off the Tourist Track

Do you want to see more than Piazza del Campo and the Duomo in Siena? Here are ideas for a few walking trips which will take you around the beautiful city of Siena, offering great views of the city and surrounding countryside and taking to you a few other sights off the main tourist beaten path.

If you want to do some wine tasting in Siena historical center or simply buy a few bottles of Tuscan wines to bring home with you, you'll find here our recommendations about the city's top places to visit.

Useful information about Siena: how to get there with or without a car, where to park and what do to once you got there, included helpful tips for most enjoying this marvellous city.

Insider Tips on Where to Eat in Siena

Quality, romantic, ambiance or just simple home cooking?  Whatever you are looking for in a restaurant, it always helps to have a local’s point of view on what is available in Siena.

Tuscany in a Day: See Siena, San Gimignano and Chianti

One of the best ways to see the top sights out of Florence is to go on a group guided tour which will take you by bus to the top sights: this one takes you to Siena, San Gimignano and Chianti, with a last stop at a winery for a tour and wine tasting before heading back to Florence.

The two annual races are just a part of what the Palio really means.  This special event, which involves the entire city of Siena, starts at birth when each child is assigned a Contrada and becomes a lifelong journey of rivalry.  Learn the more about the race.

The Treasure Within: the Piccolomini Library inside the Duomo

The first time we went into the cathedral in Siena, we weren't expecting all the black and white. Then you step into the Piccolomini Library and discover where all the colors are! It is a stupendous discovery we highly recommend you include on your itinerary in Siena.

Palazzo Pubblico and the Museo Civico, the City museum of Siena

The Civic Museum of Siena conserves many interesting frescoes and is a must-see during your visit to the city.

Visit the Baptistery, Crypt and Museum dell’Opera in Siena

Visit the Crypt, the Baptistery and the Museum dell’Opera to get a full history of the Cathedral in Siena and complete your visit to Siena's main religious sites.

The complex of Santa Maria della Scala stands in front of the Duomo, the ancient structure welcoming pilgrims to the city on their way to Rome. Today, it is a monumental building hosting artwork of extraordinary beauty of both artistic and historical importance.

The Best Day trips from Siena (even without a car)

Are you looking for a day-trip out of Siena and are you travelling by public transport? Here we recommend you 12 great ideas and many useful info for discovering the marvellous surroundings of Siena and enjoying the authentic Tuscany.

Stay in Siena this summer to enjoy the evening, completely NEW 3D video show on the side of the unfinished new cathedral next to the Duomo. A journey through centuries of history, traditions and values of the people of Siena that placed the medieval city at the center of the civilized world.

Tips for Enjoying the Palio

Are you going to Siena to see the Palio? Read these insider's tips on how to avoid the most common mistakes and enjoy this unique experience!

The Val d’Orcia invites you to slow down and explore an itinerary filled with hilltop towns, outdoor hot springs, renowned vineyards and a lively cultural calendar with jazz concerts, sagras and outdoor adventures. Check out our guide to enjoy the valley to the fullest!

Are you on holiday with your children? Here are ideas for places where the whole family can enjoy and take a break from the tourist attractions while you're in Siena.

Traditional Sweets and Pastries from Siena

For everyone with a sweet tooth, we propose a journey to taste the traditional sweets and pastries made in Siena, from cavallucci, ricciarelli, and panforte to other traditional desserts. We include a few recommendations on some of the best pastry shops in town where you can enjoy these treats.

Visit to the village of Radicondoli

Visit the village of Radicondoli in the area of metalliferous hills to enjoy the peaceful atmosphere of a typical Tuscan hilltop village and to know about geothermal energy of the area.

Books about Siena and the Palio

The best of the English narrative about Siena and the Palio tradition, for going deeper into the essence of this fascinating Tuscan city: no book however, can be compared to a real visit to the city, for seeing its artistic treasures in person!