The Certosa & Natural History Museum of Calci Near Pisa

The Certosa di Calci is Huge!

A day trip travelling between Florence and Pisa offers quite a few exciting options, for example one of the world's leading scientific museums hidden within the walls of an extra-large monastery at the foot of the Apuane Alps. This is the perfect diversion for all ages.

As you exit the main highway at Cascina on the east to west road called the FI-PI-LI and start to drive towards the Apuane Alps, you slowly shake off the busy industrial sensations and start to ease yourself into the quiet and tranquility that first drew the Carthusian monks to this area.

The establishment is set on a large plain - no hills to speak of, so it is possible to follow the towering facade of the church even from a distance. It looks almost lost, and definitely out of place, with its prestigious white marble buildings and tall protective walls in comparison to the ancient olive trees and serene country life that surrounds it. 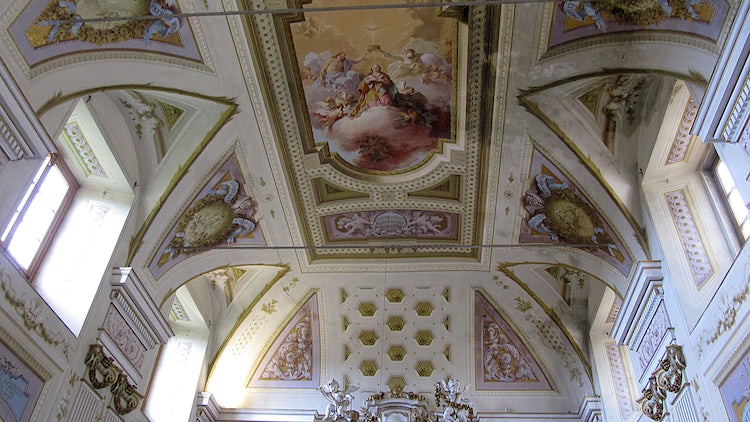 Where did the "Certosa" come from?

The name “certosa” is Italian for Carthusian monastery, or charter house and derives from the Chartreuse Mountains in France where you can find the head monastery of the order. The origins of the structure are from the mid 1300’s however, what you see today has been mainly restructured to accommodate the monks that were fleeing from France & Napoleon with the dramatic new laws that were closing down monasteries.

What is hidden behind the Certosa walls?

In order to visit the Certosa, you have to take the tour.

Unfortunately there are many areas that are not open to the public due to its deteriorating state. What is visible, is only a small portion of this opulent estate but it definitely gives a clear idea of the lifestyle of the monks.

The guides are very knowledgeable and readily share the little quirks of the Certosa. I arrived on the first Sunday of the month, and had free entrance … and I arrived just in time because the last tour on Sunday is at 12:30 noon! They are very precise.

Surprise: visiting the “cells” of the “padres” (similar to mini-suites at your favorite 5 star hotel) and you can see the skeletons of the humpback whale as it appears to jump out of its exhibition just beyond the garden walls

As you walk under the covered gate you are presented with the 17th century facade of the church in white marble with a grand front entrance, topped with the tower figure of the Virgin Mary. There were 15 “padre” (monks) that lived in the certosa and their job was to focus on the Carthusian life: contemplation, prayer punctuated with long retreats in solitude and silence.

So while they were busy praying, they had 65 “caretakers” or lay brothers who were there for the daily running of the certosa: growing the food, cooking, cleaning, dealing with the locals and of course, their own time dedicated to prayer. 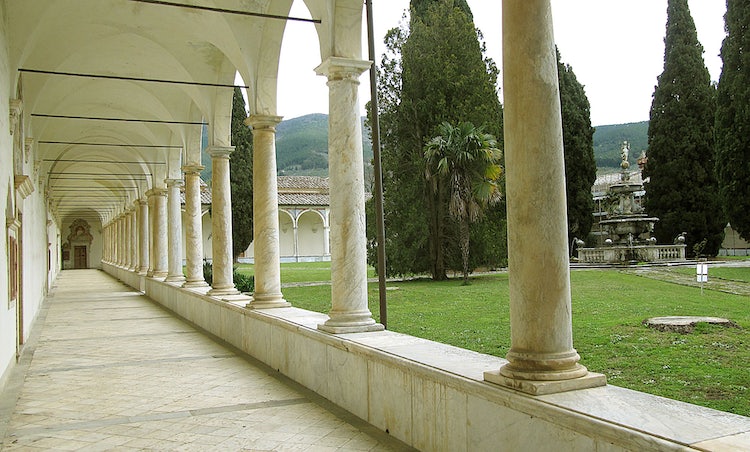 The tour takes you to see several of the chapels which are located within the main structure, some of which have been recently restored. The refectory was a large room with frescoes on all four walls including a Cenacolo (Last Supper) by Bernardino Poccetti (1597) and two frescos which acknowledge the patronage of the Gran Duke and his wife.

While I was there, the cloister was covered in scaffolding since they were replacing roof tiles - however, even looking through the bars, it was absolutely amazing with an octagram monumental fountain in the center surrounded by antique cypress trees.

The cemetery was small and unassuming with no markers, we were told that the monks were buried without a casket, and without a tombstone - because their earthly name wasn’t need in the afterlife.

The monk spent his time here in prayer, meditation, caring for his private flower garden, perhaps writing or transcribing and then working - mainly as a carpenter for small tasks.

Once you have visited the religious side of the monastery you will be taken to the chambers of the Grand Duke, who spent much time here, residing in the Foresteria Granducale. Dignitaries from all over the world have been entertained in these walls, one of the last was Tony Blair.

Leaving the apartment of the Grand Duke and his cloister, you will be escorted outside in the long front courtyard, on one side are the buildings that now hosts the Natural History Museum and on the other side you can see the area which housed the gardens that the lay brothers cultivated in order to provided fresh fruit and vegetables, cheese and eggs for the monks - they did not eat meat.

The last stop is the antique pharmacy which was one of the principal sources of income for the local monks. The pharmacy was open and functional up until just a few years ago...fascinating was the degree of accuracy they scales performed at. We had a little demonstration as the guide tipped the scales with a scrap of paper... 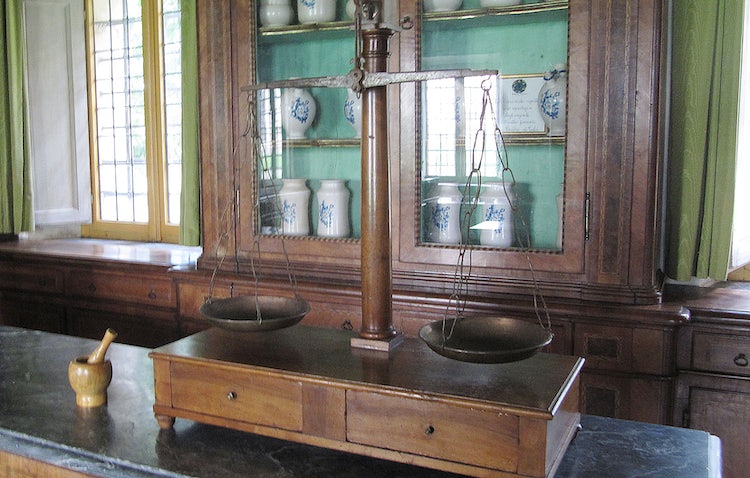 Literally, it is a whale of a tale!

The eccentric collection at the University of Pisa Museum of Natural History started in 1591, with the Grand Duke of Tuscany Ferdinando de’ Medici. Consisting of a vast and varied assortment, it was considered to be one of the first “museums” of its kind. Fashioned a bit after the German idea of a “wunderland” with natural curiosities and oddities, the collection grew to include minerals, zoo animals, skeletons, fossils and so many little odds and ends. In 1980 the university gathered and organized its scientific research and established the now permanent exhibition in some of the buildings which make up part of the Certosa.

Surprise: the history of the territory of Pisa, literally an ocean of surprises! Many exhibits in English - great for the entire family

Amazing to consider: the collection is comprised of four centuries of research at the Pisa University combined with the Grand Duke's collection.  Together this impressive display of oddities  has established a reputation as one of the world's leading scientific museums. The great thing is that many of the newer exhibitions are in both Italian and English - so it can be a fulfilling experience for any age.

Please note, this is not a state or civic museum, but entirely run by the University of Pisa - so there are no free Sundays (I learned the hard way). 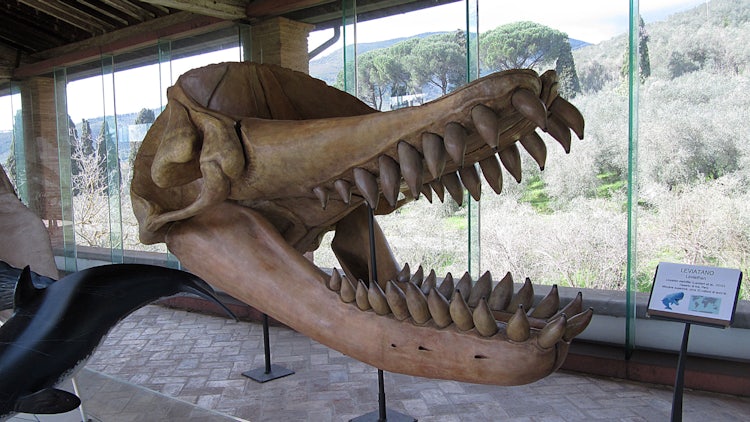 What is there to see at the Museum?

Though everything is a bit fascinating - and some parts are a bit like the "believe it or not" tent at the circus, there are some rather interesting exhibitions. My favorite exhibits were:

The telling of the history of the territory that stretches from Florence to the sea. Millions of years of history to explain why the peaks of the mountains are so white, why we find fossils in the dirt nearby (even today) and what existed here even before the dinosaurs. One large room, divided into three sections walks you through the history by making huge jumps of thousands and thousands of years.

(Don’t let them steer you wrong: as you exit the ticket booth/gift shop, walk across the sidewalk in the courtyard and turn to your left, then go thru the first door on your right-otherwise you will be walking backwards - back in time.) 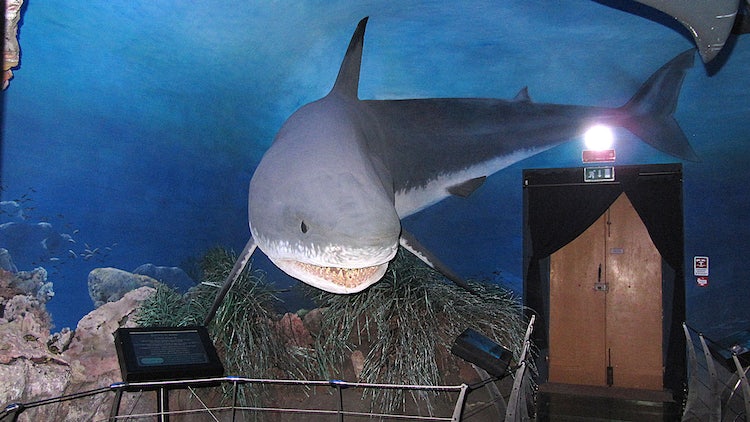 Suggestion: Bring a picnic lunch and eat in the olive grove in front of the museum - the trees are antique and absolutely gorgeous. Or you can use your ticket for a discount at one of the restaurants in town. Ask the staff to assist you, they have a list of places right as you walk into the Certosa.

The second room I really enjoyed is an amazing space, with lots of natural light where you can walk thru the skeletons of the whales. These huge, monstrous skeletons give you just an inkling of how large these amazing creatures are.

There is a special dinosaur display available till September 2018, and though these are not the mammoth dinosaurs that one dreams about, the exhibition is tasteful and probably just the right size for the younger visitors. I enjoyed the archaeologist room which is designed to show you step by step the path a fossil takes before it can be on display in the museum. 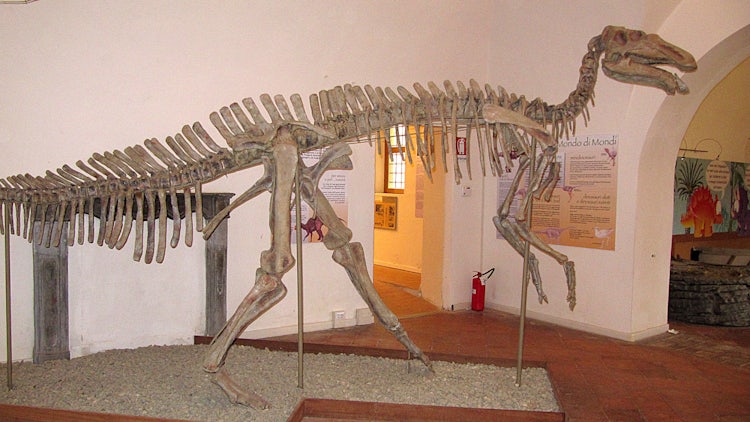 Editor’s Note: This article was updated with new info on February 21, 2018

The grounds around the certosa and museum are beautiful, and you can definitely spend the time walking around and appreciating the sound of silence - much like the monks did years before. As you plan your day trips from Pisa and Florence, be sure to include an afternoon exploring the wonderful countryside that extends between these two iconic cities and a stop at this incredible little treasure at the foot of the Tuscan mountains. 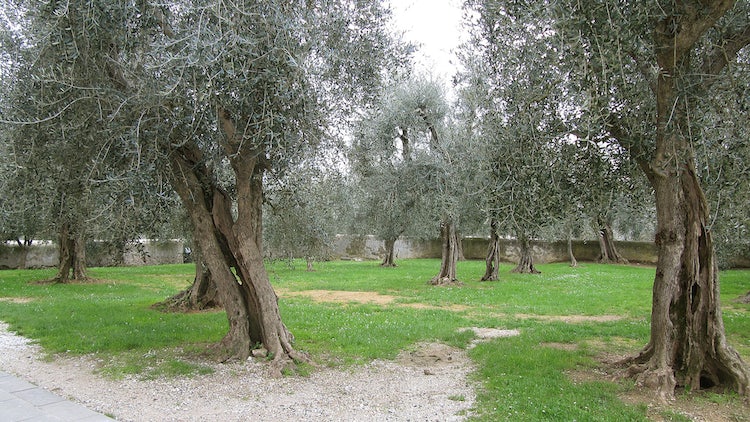 Open: The Museum is open over the whole year, except 25 December. The first of January the Museum open at 15.00.
The ticket office and the bookshop close 45 minutes before the Museum.