The inside story of a "contradaiola"

The inside story of a "contradaiola"

It is the second of July, the most important day, or one of the two most important days of the year in Siena and also in the life of Rachele. I am meeting her to the sound of drums from other contradaioli (members of a contrada) preparing for the big event later today. 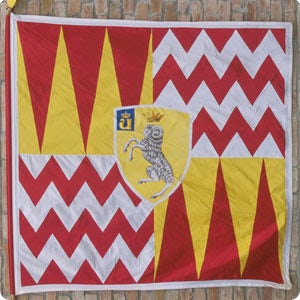 Rachele is a member of the contrada of Valdimontone, one of the 17 Contrade which every year in July and August compete in the famous horse race, the Palio, at Piazza del Campo. During her life as a contradaiola she has missed the Palio only once, and as she says “it was terrible”. This year she will not watch the race live, but since she has attended all the pre-events of the Palio, watching the race on TV tonight with her Polish boyfriend and their 3 month old Ambra will not be a big deal. Only 10 contrade compete in each race and this year neither her contrada nor their enemy is running, so a “Palio of tourists”, as she calls it, is not the worst to miss. 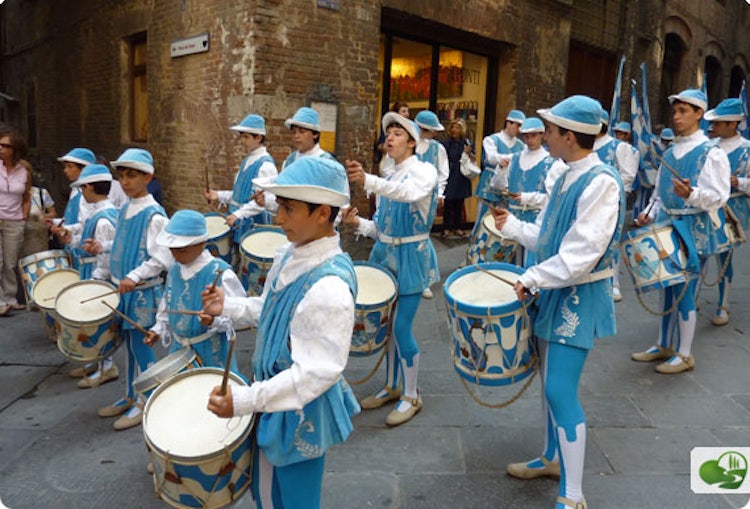 A running contrada, the Onda, "practices" by marching around in the days before the Palio

Rachele did not start her membership of Valdimontone in the usual way. Normally parents pass on their contada to their children and take them to play with other children in the contrada, facilitating the beginning of friendship for life. However, Rachele’s parents are not from Siena and are therefore not part of a contrada.

When she was six years old a friend from school took her to Valdimontone, she got baptized there and started her life as a "contradaiolo". However, as it happens with children, the friendship did not last and a couple of years later she stopped being interested in going to the contrada and found friends outside the borders of Valdimontone. Then, when her contrada won in August 1990, and she was old enough to celebrate and have fun with other contradaioli, she realized that it was time to start being a real contradaiola and not just a de facto one. 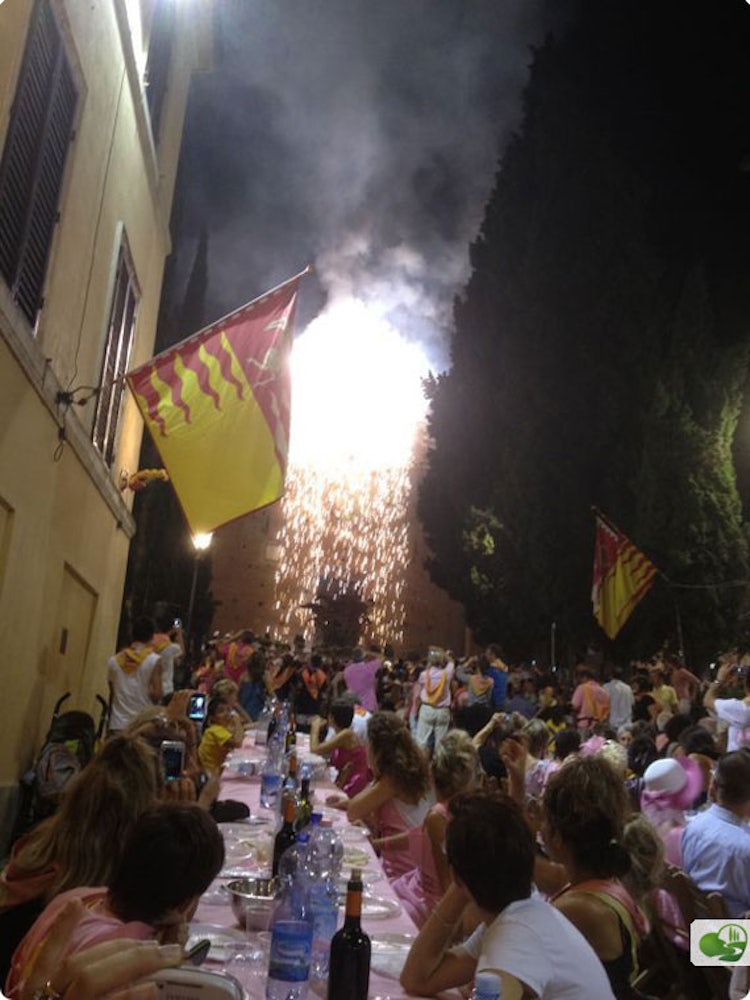 Once Rachele turned 14 and was allowed to stay out longer at night, she found a group her age who also wanted to start joining the events in Valdimontone again, so together they started going to the contrada on a regular basis. Even though she was already baptized, the re-entry was not easy. Besides the formal structure of the contrada, an informal hierarchy also often exists, and this was what Rachele and her friends met when they tried to get back into the contrada. Her and her new group struggled to get accepted as real contradaioli and for a long time they felt like second league citizens. All work inside the contrada is done as volunteer work by the contradaioli, so Rachele and her group took on a lot of tasks like bartending in the contrada bar (which is open all year round) or helping prepare the contrada dinners where up to 2000 people attend. After almost six years of showing their commitment to the contrada, they were finally accepted and got to sit at the tables of the inner circle at the dinner before the Palio, the most important dinner of the year. I asked Rachele if during these years she ever felt like changing to another contrada, but the answer was a very clear: “No! Never!” If you belong to a contrada, it has your full support and that is where you belong.

United towards the same goal

The contrada community is magical and very unique, but also very local and Rachele recognizes that it is not for everybody. She normally lives in London, but comes back to Siena every year in both July and August to take part in the Palio activities. The contrada is her link to the city and she knows she will never break it, even if her parents move from Siena. If she were to not have any more family to visit here, she will still keep coming back.

Most contrade have one or more "enemies" among the other contrade. According to Rachele, having an enemy creates more excitement during the Palio, as them not winning is almost as important as yourself winning! So if your contrada does not run in the Palio and the enemy does, the Palio is still thrilling. If your enemy loses, you celebrate, if they win, you cry. Rachele loves this feeling of being united towards the same goal: for you to win and for your enemy to lose! It is a constant wait for victory, and suffering the many defeats, and when it finally happens, celebrating the victory together is what it is all about.

In 2012, after 22 years without a victory, Rachele’s contrada finally won the Palio. I asked her how this made her feel, but she became speechless. It is simply indescribable, if it happens again soon, she said, then she might be able to explain. The winner of the Palio has the right to mock the other contrade, and one way to do that is to wish them all a merry Christmas, as waiting for Christmas is the only thing they have left for that year (see the picture below). 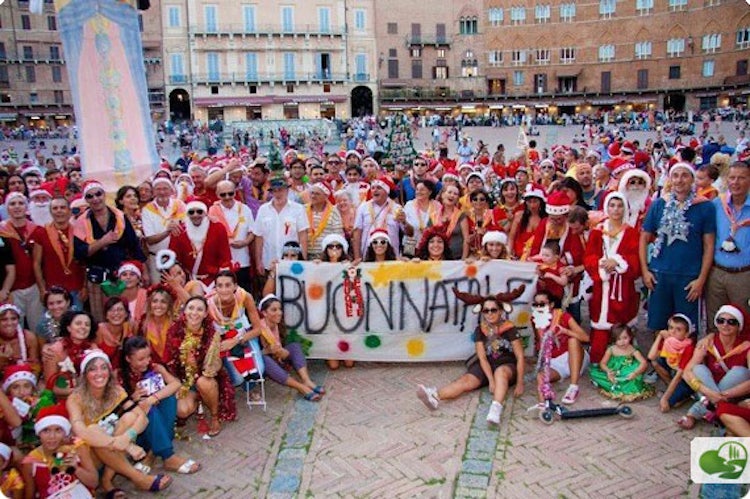 Besides victory, Rachele’s favorite activity is walking and singing from the Valdimontone contrada to Piazza del Campo before and after each trial race which take place two times a day for 3 days before the Palio. She explains that this a moment where you really feel united as a community, and she is happy that her contrada is relatively far from the Campo so that they get to sing a lot!

And the worst moments

The answer to what the worst moment has been in Rachele’s life as contradaioli comes very quick. It was when Nicchio (the enemy of Valdimonte) won in 1998. But as soon as she has said that, she changes her mind and says that no, actually the worst moment was in 2010, when her contrada had not won for 20 years and all conditions were in place for them to win. Rachele and her group had bought expensive tickets on the stalls (the benches set up around the Campo) and then they did not win. They were devastated and cried asking themselves what they had done wrong. At that moment, victory is the most important thing in your life, Rachele explains, but when you wake up the next day, you do realize that it is just the Palio and your life will go on and what you can do is to start the preparations for next year’s Palios.

August race, tourists and the winner

Valdimontone will run in the August race this year (2014) and Rachele is mostly looking forward to the moment they get their horse, which is done in a draw three days before the Palio. From this moment, you can start predicting what will happen in the Palio as the horse has a lot to say in regards to the possibility of winning the Palio. This is where all the excitement begins!

Rachele strongly points out that the Palio is not a touristic event, and to the people of Siena it is a very serious moment. Yet, many tourists do come to watch the race, and Rachele also recognizes the importance of this. She does have some recommendations to offer thos from outside of Siena who do come to witness the Palio. First, be careful about approaching contradaioli in the time before the Palio, as this is a very sensitive moment and the people might actually act a bit aggressively. Further, on the day of the Palio, all the horses get blessed in the churches of the contrade. Rachele recommends tourists to stay away from these events as the churches are really small and taking photos is not allowed as it will disturb the horse. If you do want to see it, find a contrada that does the blessing outdoors. For more tips on how to behave during the Palio, read this article.

Finally, I asked her who she thinks will win the race tonight. She thinks it is hard to predict as most of the horses are new, but she believes that both Aquila and Pantera have a chance. I went to see the race and even though Aquila and Pantera were leading during most of the race, at the last of three rounds they were overtaken by the Dragon who surprisingly ended up winning. This is the contrada that Rachele’s brother decided to join, so she is happy for him. The Dragon victory was unexpected as they did not have one of the best horses, and their official jockey was actually injured during a trial race so the winning jockey was a substitute. This shows how the Palio is always so unpredictable, making it even more exciting and a must see event if you are in Siena during the summer.

So if you head to Siena for the Palio: enjoy it but be prepared to be the spectator that you are and witness how the local citizens experience and celebrate on this special day of the year.