Best Extra on Your Itinerary

The unassuming city of Arezzo will amaze you with the number of famous artists, architects and cultures that have passed and left their mark. Yet, at the same time it is this very lack of flamboyance which makes it one of the more endearing cities in Tuscany.

Definitely a city that has much to boast of with its Medici Fortress, Roman Amphitheater, Etruscan origins and cultural contribution in the way of artists, poets and artisans - however, after touring much of Tuscany and seeing all the “Must See sites” it is truly a relaxing change of pace to stop in a city that doesn’t assault you with long lines, groups of tourists and fixed menus but rather gently invites you to stroll the streets and admire what many would call a true open air museum. Without buying one ticket, you can roam the streets of this town and feel yourself slipping into another time....slowly and easily, just one step at a time. 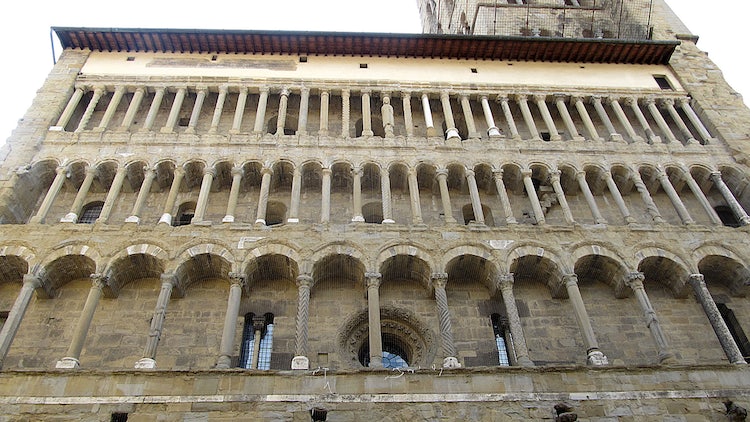 1. A City That Gives Life to Tuscany

The citizens of Arezzo (pronounced a-ret-so) live the city; the historical center is not just a place that is visited on special occasions or celebrated for its monuments and architectural importance. The stores, restaurants, artisans and antique dealers were (and still are) there to serve the general public, so though you will find many menus in English, French and German and several shop owners who speak more than one language - it is almost a relief to know that they cater primarily to the locals who still use the city on a daily bases. After spending some time at one of the cafe bars or peaking into one of the many stores and listening to the lyrical sound of the Italian language with no foreign interruptions...it is obvious that the tourist is just along for the ride. And if you let go and explore, what a ride it can be! 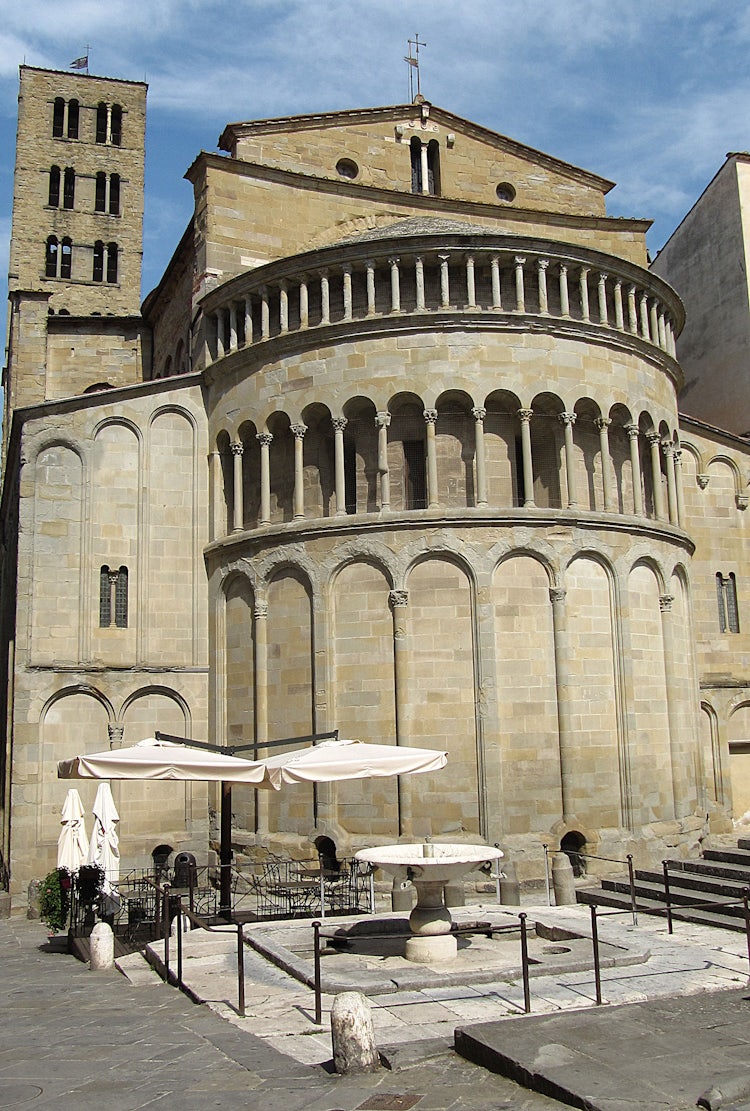 It’s not necessary to know your history timeline to appreciate the buildings, churches and monuments in Arezzo however, a few notes about who and when will help you distinguish what you are looking at. The first peoples to settle and leave a mark were the Etruscans. It was this population who gave Tuscany its name (from the Roman word for Etruscans is: Tusci) and even the Tyrrhenian Sea (from the Greek word for them: Tyrrhēni). This largely undiscovered culture is well known for their unique language, artistic talent with bronze, ceramic and architecture as well as an elevated political and economical structure. The exceptional display at the Archeological Museum will definitely provided the bases for admiring their work as well as that of the Romans who took their place.

The museum is set in a well organized environment and it is easy to visit. The Romans, who conquered the Etruscans, built on top of the existing city re-utilizing many pre-existing buildings and architectural concepts - however they did come with their own distinct contributions - the least of which is the Roman Amphitheater (which is estimated to have seated 13,000 persons). Another example is the road via Cassias which opened Arezzo up to Roman trade. This new road pushed Arezzo into a position of power and wealth until the Romans prolonged the road to Florence, which sent the area into a notable economic decline. 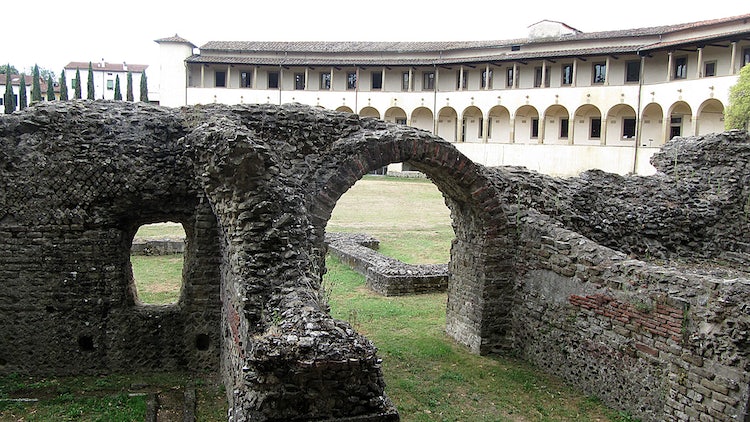 The Roman part of Arezzo was dismantled in part by the Gothic War and the invasion of the Lombards. However, the town grew in importance during the medieval era and was characterized by the many towers and architectural contributions during this time. But this all ended when they decided to challenge Florence. After the battle of Campaldino in Casentino in 1289, Arezzo struggled to stay on the map until they finally gave into Florence. Cosimo I, probably the number one contributor to the final dismantling of the Roman remains, built the Fortezza which dominates the top of the hill. The history of Arezzo follows a succession of being conquered and tormented by war until it finally re-established itself as a cultural center in Tuscany including a re-enactment of a famous medieval event called the Giostra of the Saraceno, a Polimuscial contest, one of the largest antique fairs in Tuscany, as well as several artistic, theatrical and musical initiatives. 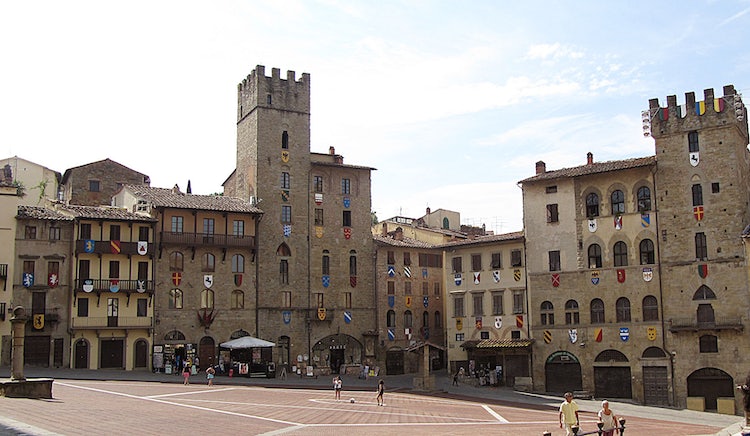 There is a lively atmosphere of restaurants, caffès and outdoor bars during the warmer months, set along the picturesque streets inviting locals and visitors alike to sit, relax and just enjoy the delicious atmosphere of the quiet cobbled stoned streets, the ancient towers, buildings and little stores which beckon you to snoop around for the next great antique find. Small little places line the Piazza Grande with picture perfect outdoor lounges set up under the Loggia del Vasari; there are lofty vaulted ceilings and little bottegas opening to the Piazza Grande giving you a feel of yesteryear and the perfect place to sit and people watch.

This Piazza was recently brought to life for the Italians in the film “Life is Beautiful” by Roberto Benigni in a story of WWII. Today you will find several fine restaurants that offer a truly special position on the edge of the square with its tower homes and beautiful monuments.

Walking is the best way to enjoy the city. True it is on a hill, and true it will take a little bit of an extra push to see it all - but it is definitely worth the visit and the walking. You can definitely enjoyably exploring the entire city in a day and that includes the Archaeological Museum and the Art Museum with little detours in the many notable churches, piazzas, cafes, bars and a restaurant or two. Though two days would actually give you a chance to live the city like a local. Arezzo definitely merits a day on your Tuscany itinerary: there is an intense pride among the inhabitants of the city, yet a bit more relaxed than the nearby mecca of Florence and definitely less touristy than nearby Siena. 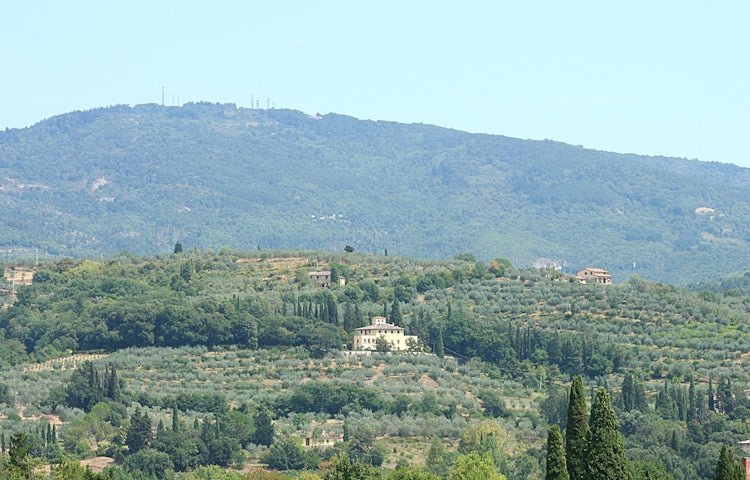 4. Tease your Taste buds with Flavor

It is quite possible to find the perfect restaurant in almost anyone of the side streets, all specializing in local products, wines and typical culinary dishes. Via Redi behind Piazza San Francesco is lined with something for everyone with its outdoor seating in a quaint little “viale” of Arezzo. Menus range from classical with homemade pasta and ragù, roasted meats and potatoes, traditional antipasti with cold cuts, crostini and of course almost everyone has a wine list that offers the delicious wines of the “colle aretino.” Or you can try the unexpected twist of home made crepes stuffed with typical Tuscan ingredients including fresh prosciutto, tomatoes and cheeses at Crepes del Lune, a sweet little place specializing in a delicious, healthy and light menu. Another one of my favorite stops in Arezzo includes the pizza a taglio (just a slice of pizza) from …. - it has been there as long as I have been going to Arezzo, and it is still as good as I remember. Be it a cold winter day or a boiling temps in summer, a slice of the margherita pizza is a tasty treat! 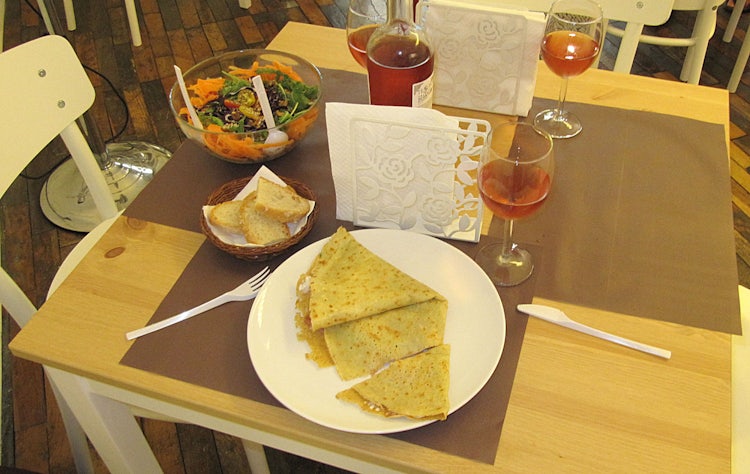 5. Getting Around is Easy

Arezzo is well organized as far as parking options go, and one of my personal favorites is the Parking Pietri, which normally always has space, and it is relatively economical compared to many cities in Tuscany. Not only is it close to the city center, easy to drive to but it also gives you a prime visual of the antique walls that surround the city and the extra plus of an escalator to the top of the hill.

Where: via Giuseppe Pietri, Arezzo (escalator is here for easy access to the top of the city or side lateral entrances to the base of the city)

Hours: paid parking from 8am - 8pm, M-F including the weekend of the Antique Fair

At the top of the stairs there is a privately run tourist area which is normally well stocked with locally produced products and regular updates on the activities within the city walls as well as the surrounding four valleys.

From here there is one last escalator and a small covered corridor which will take you to the top of the city - or you could opt for the stairs before the tourist center and go directly to the very top of Arezzo and the Medici Fortress...either way the impact is spectacular. 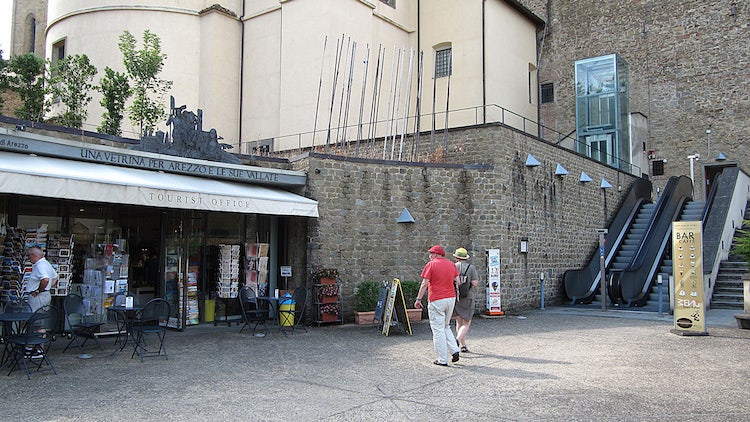