Eating on the Run has its Upside

Normally what we intend as street food is not something “new” on the culinary panorama, rather we are talking about something adapted to today’s needs. Traditional foods that have a long and illustrious history and culture from various places and origins transformed for eating on the go.

The expression street food, means food that can be eaten fast, without requiring a table like a normal meal, maybe even eaten while strolling the streets or sitting on a park bench...pretty much wherever we happen to be at the time.

Today street food has become an art, a synonym for tradition, something both genuine and authentic.  It has become quickly one of the best ways to guarantee eating real local and traditional food, with local and fresh ingredients in a familiar and friendly atmosphere, where the phrase "alla bona" comes alive.

Every town in Tuscany has its own street food

We are talking about dishes and food that constitute the basics of the local culinary traditions, like that of the trippa and lampredotto from Florence - except that at one time these were normal dishes prepared by the Mom or Grandmom at home using a family recipe. Dishes that took time and care to make - and meals that we were used to eating as we came home from work. 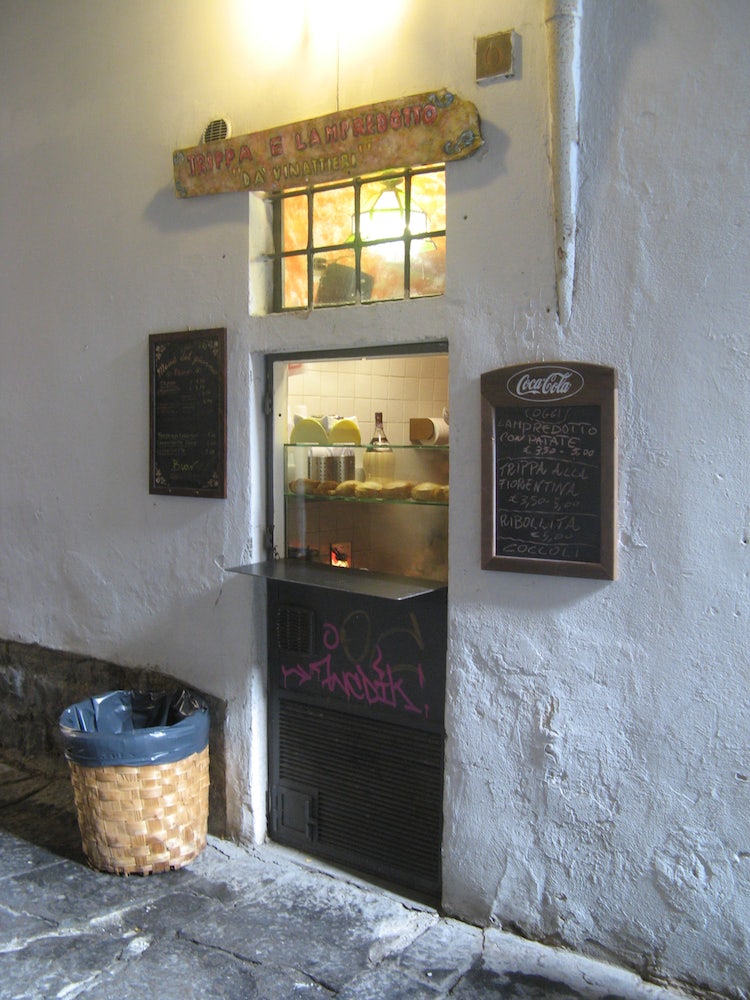 Now we often find ourselves eating lunch at our desk or on the run, without ever really having enough time to sit down at a table and enjoy a full meal.

And this is how we have come to know street food, which in its defensie, has made it all the more possible to taste all the local specialities!

In Tuscany, those that are more popular are always the panini.   They are a solution with a thousand good points since they can be filled with almost everything from a “cotaletta” to a “frittata” passing for an alternative meal even lighter and with less calories than a sit down meal.

The bread from Tuscany, typically without salt, lends itself to being combined with almost any flavorful ingredient since the flavours don’t compete between themselves.  The classic panino with prosciutto, salami or mortadella - they are all good.  And the variations are endless, just add cheese, mayonnaise or one of our more flavourful sauces with mushrooms or artichokes.

Florence is the patron saint for a panino con la trippa or lampredotto, (even though you can find it just about anywhere now) This is a dish that was born in the capital of Florence and spread from here. It is an entirely new (and delicious) way to savour a traditional dish that was once only eaten at the table with the family - laughing and joking around at meal times...because as the Italians will tell you - a tavola non si invecchia, (eating is good fun!) 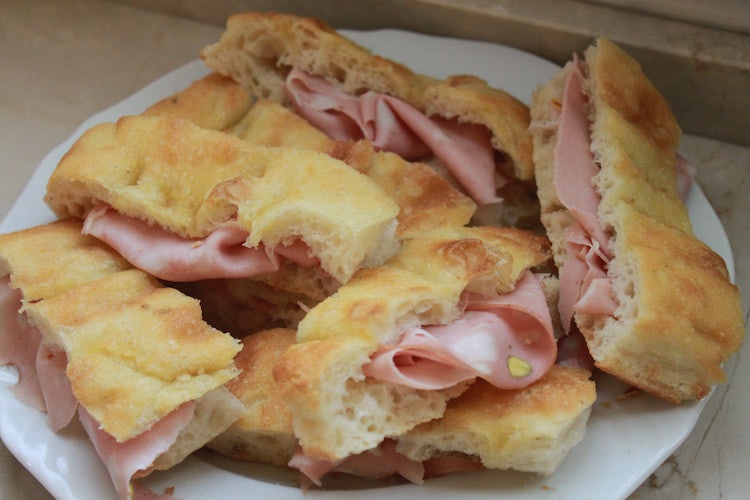 The stands that (paninari or porchettari), can be found everywhere now but perhaps if you want an authentic flavour you should try Nerbone at Mercato Centrale di San Lorenzo in Florence...who seems to be unanimously voted as one of the best in the region.

When we talk about roast pork or a porchettaro, we refer to a stand that specifically sells panini with pork roasted in the typical Tuscan style, something that hardly anyone has time to do - - like they used too.

The porchetta is a pork roasted over coals with a special combination of flavours salt and pepper, just the way tradition dictates. 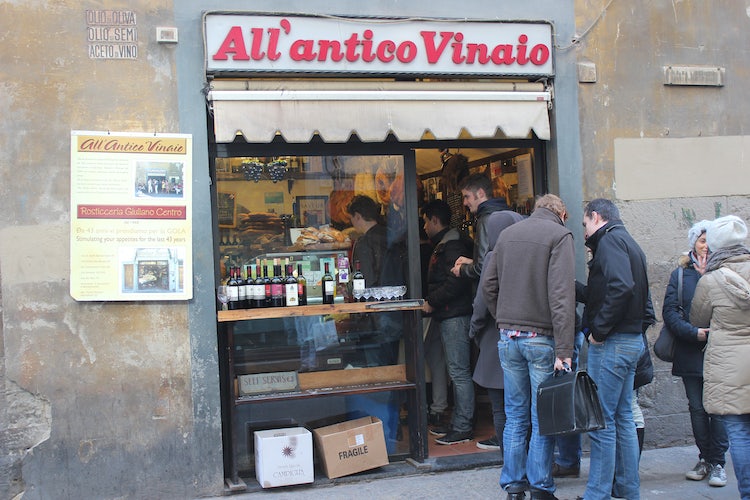 The classic panino with porchetta, which outside the borders of Florence is the first choice other than the trippa and lampredotto, was normally only found at sagras, or local festivals or even a midnight snack before heading home after the discoteca...if you ask anybody it was a must after an evening out with their friends. And of course, everyone had their favorite place to stop.

Obviously, the options were varied, there was the panino con la porchetta, or a hamburger, hot dog, or one of my favorites, a panino with sausage, and grilled onions….always promised a sound sleep!

Don’t forget, that the classic panino can also be made with focaccia o schiacciata, opposed to the typical Tuscan bread which is considered without much flavour these would add the aroma of olive oil and a good dose of salt. 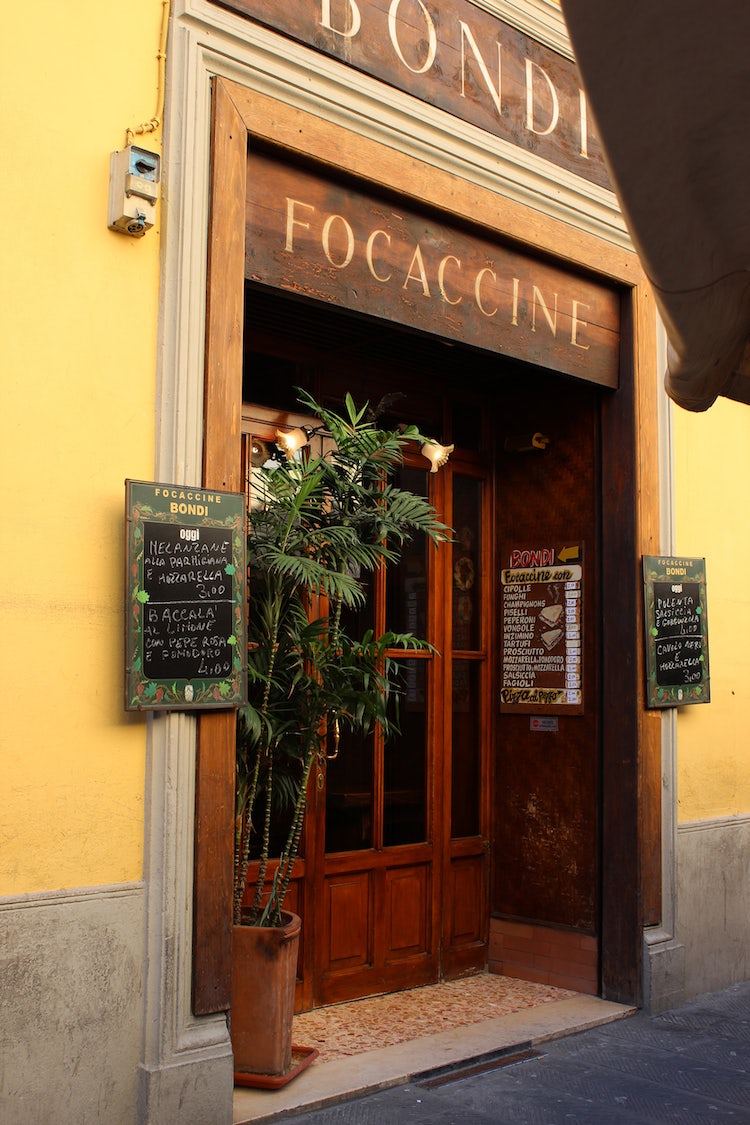 And we haven’t even begun to talk about the focaccine ripiene and a slice of pizza, sometimes called pizza in cono, because a slice would be rolled into a cone form and wrapped with brown paper...the shape may change but the flavour remains the same!

And when we talk about a cone, there is the delicious fritto misto a Livorno, mixed fried nuggets of either chicken, vegetables or fish from Fillungo, a classic stop.

Walking along the roads in the in the zone called Venezia at Livorno with a paper cone in one hand and a glass of crisp white wine in the other is one of those experiences that I repeat as often as I can :-P

Livorno is also famous for another traditional street food, the mythical cecina, also known as cinque e cinque (five and five) it is eaten by itself, or as the filling for a panin. The name five and five comes from the way you would order it: 5 cents of bread and 5 cents worth of cecina. Cecina is a pancake made of chickpea (or garbanzo bean ) flour. 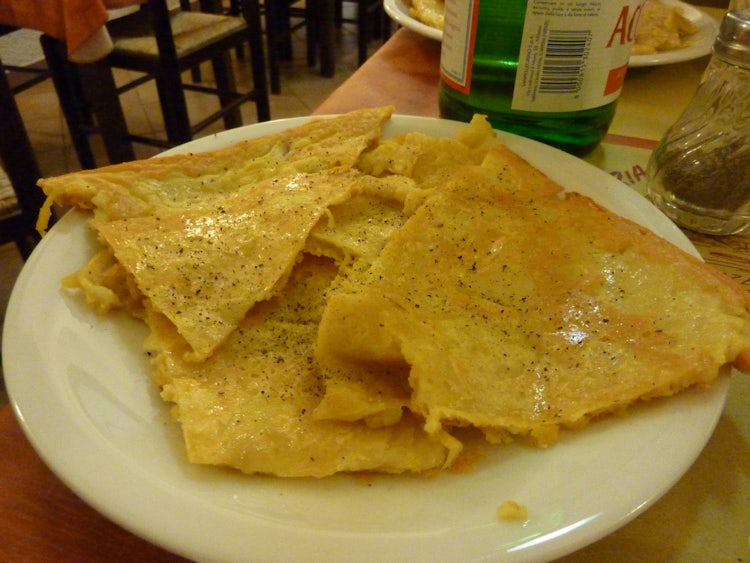 Somethings will never change, even if it is street food, it is always best if accompanied by a delicious glass of wine...be it red or white...in some cases even on the micro brews which are sprouting up everywhere.

A sagra in Tuscany highlights not only traditional foods and...