Livorno shines under the lights of Effetto Venezia

Over 30 Years of Celebrating in Livorno

Effetto Venezia 2019 will take place from July 21st to August 4th.
Effetto Venezia (literally "Venice Effect") is the biggest event organized in Livorno during the summer and it is in its 33rd year! This fun filled event get its name from the district called "La Venezia" and is generally takes place between the end of July and the beginning of August. Effetto Venezia basically is a pleasant summer evening festival that has something for everyone.

The event lasts for several days with many performances of various types: theatrical and musical events, exhibitions and cultural initiatives. 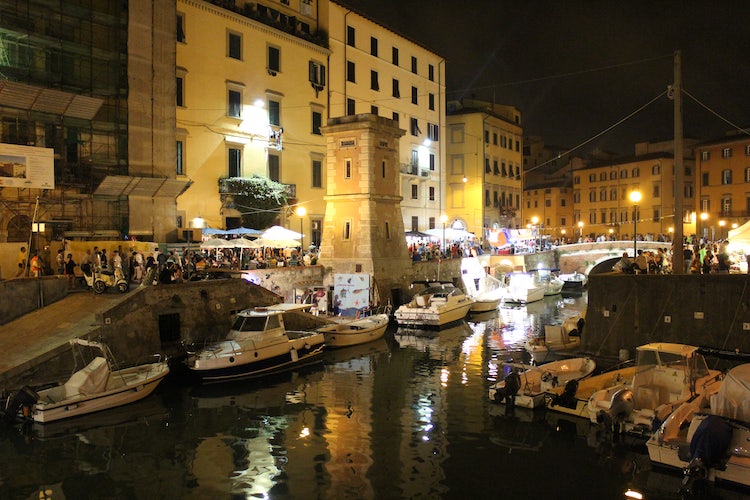 The district in Livorno known as “La Venezia” is filled with stands of crafts, antiques and vintage objects and, of course, food and wine. Even the bars and restaurants in the area set up outdoor with tables so you can enjoy the energy and excitment while eating a delicious meal.

The event has grown so much in the last few years that it is literally spilling out onto the streets. You will find it in the quaint city streets and doorways, up and down the steps and over the bridges, it is an open invitation to explore the corners and crannies looking for something new.

The Venezia (or Venezia Nuova) is a neighborhood located near the New Fortress, in the historical center of Livorno.

The district, crossed by waterways (the "Fossi Medici" are canals built by the Medici family to facilitate the transport of goods into the city), small bridges and tiny squares vaguely reminds one of the Venetian lagoon, from which it takes its name.

The event has even taken over the Fortresses and entered Forte San Pietro, you’ll find the celebrations in the courtyards, palazzi, in the cellars and along the water...the urban scene sets the stage and everyone is invited to participate.

Come prepared to spend the night, because everything gets a late start and goes until the midnight hours!

The Venezia district at sunset is lovely in itself and welcomes with an enchanting atmosphere.

The similarity to the city of Venice is tricky: if you arrive imagining it as a "little Venice", you'll likely end up disappointed because it is very different. Putting aside any comparisons, the district La Venezia is full of charm and is certainly one of the most characteristic areas of Livorno. Consider it also is the only district to have survived the bombings of World War II fully intact. 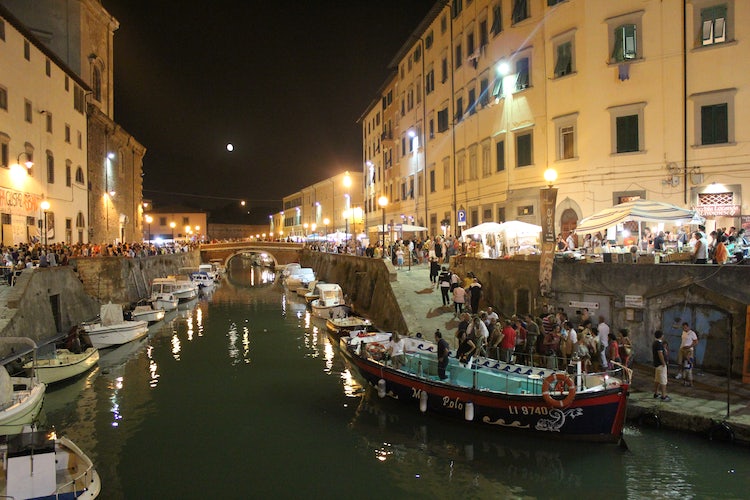 The different restaurants and bars in the neighborhood are all abuzz and quite full. Some propose classic dinner options, while others offered street food, even take away - have fun choosing the from the many options - but don’t worry you can always go back. The food and wine will be there all evening long, so you can do some more tasting of the "local" specialties including the "cacciucco" (a typical fish soup from Livorno) and fried fish. 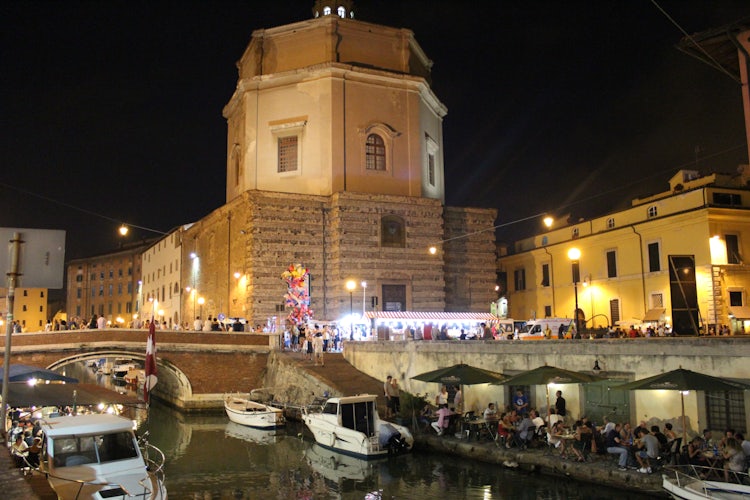 In addition to the ambience, Effetto Venezia struck me particularly for its varied audience. Many young people attended the event, but also many families with small children as well as seniors. Some were walking through the stands, others enjoying a glass of wine while chatting, others spent the evening watching the various shows.

Don’t miss out on visiting the “fosse” by boat with a guided tour, an unforgettable experience for sure!! A visit starts at the pier and works its way around Fosse Reale where you can view the Old fortress, underneathe Piazza della Repubblica, the Pontino District and it’s boatyards … and of course the Venice Distict, It is advisable to make your reservations in advance at their website.

As it was the last evening of the festival, I would have expected several more shows as space was certainly not lacking and, I imagine, artists either. It is the only critique I have because otherwise we really enjoyed our night at Effetto Venezia. We will definitely return!

How to get to Livorno and to the festival

Arriving with by Train

You can easily get to Livorno by train and you will find shuttle service that will bring you closer to the event.
The railway line is the one that connects Turin/Genoa to Rome. You'll also find direct trains from Florence and Pisa, which thankfully run quite late (even if they are the slower trains). From the train station, a bus (Line 1) will take you in the direction of the party to Piazza della Repubblica/Via Grande.  It is about half an hour walking distance, if you choose to instead enjoy seeing a bit more of Livorno. 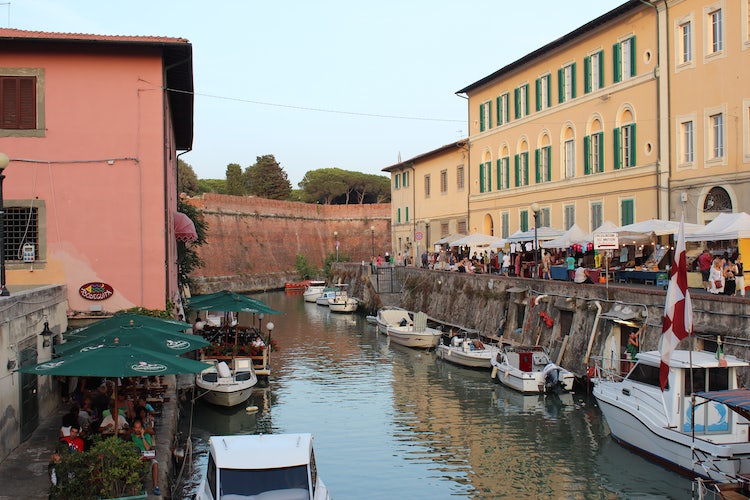 Arriving with a Car

Coming from the North you can take the highway A15 Parma-La Spezia or the A12 Genoa-Livorno.
From the South, the A1 to Florence and from here you can take the motorway (A11 to Pisa, then the A12 until Livorno) or take the Firenze-Pisa-Livorno (FI-PI-LI).

On the occasion of Effetto Venezia some roads in the city are closed starting from late afternoon.
For this reason, consider leaving your car in one of the city parks or at your hotel, if you stay near the Venezia district.
Among paid parking spaces closest to the event, you'll find ones in Piazza Unità d'Italia and Via della Cinta Esterna.  For more detailed info on the parking check out their website, it is only in Italian.

A great option is to find a hotel, B&B or agriturismo close by and call it home for a night or two while you get into the festivities. Check out this site for some accommodation ideas.