The Ferie delle Messi or Medieval Harvest Festival returns every year to San Gimignano and represents a celebration from medieval times that is organized throughout the entire historical centre of this beautiful medieval village in Tuscany.

The "Knights of St. Fina" is an association which has organized the event since 1993 with the objective of celebrating the "cavalier" tradition in honor of the knights of San Gimignano that took part in the famous Tuscan Battle of Montaperti (1260) and Campaldino (1289), as described in ancient documents.

This association takes the name from Fian dei Ciardi, the patron saint of the town, a small girl born in San Gimignano in 1238. She was afflicted by a terrible disease at the tender age of ten and faced a long period of suffering during which time she displayed deep blind faith and spirituality. Her faith was so strong, it became a symbol for other believers and her house became a destination of many pilgrimages. After her death, violets bloomed on the pallet where she had lain - you can see symbols of these flowers all over the walls of the city, known as "The violets of Saint Fina", particularly in the Duomo. 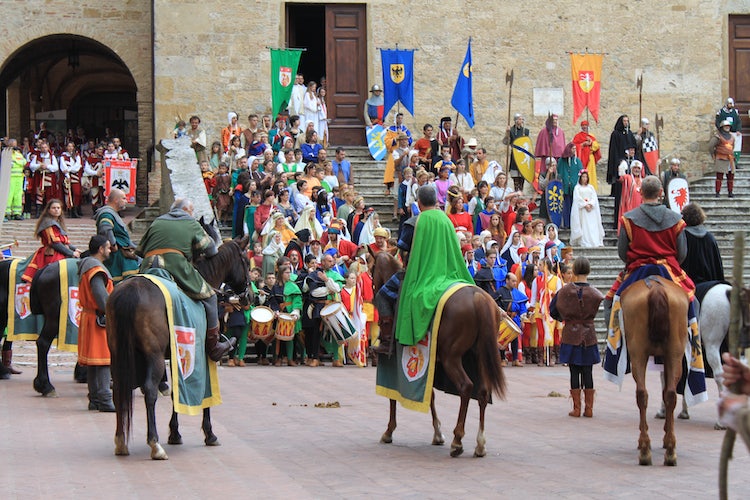 The Harvest Festival in June

Every year, San Gimignano commemorates the traditional Ferie Messum, a fertility festival which dates back to 1255. At that time, the whole population took part in the event in which the four "Contrade" (neighborhoods) of the city - San Giovanni, San Matteo, Castello and Piazza - compete against each other in traditional games in honor of fertility. They hoped to obtain abundant harvests through singing, dancing and playing medieval games such as tug of war, archery and the "Giostra dei Bastioni" where the knights competed against each other armed with sticks.

Today, the event takes place on the third weekend of June starting on Friday night, and continuing through Saturday evening and all day Sunday. During these hours, the town takes a step back in time offering a typical medieval and fun atmosphere, recalling the ancient scents and traditions of the time that is sure to please history buffs as well as the common folk ;-). 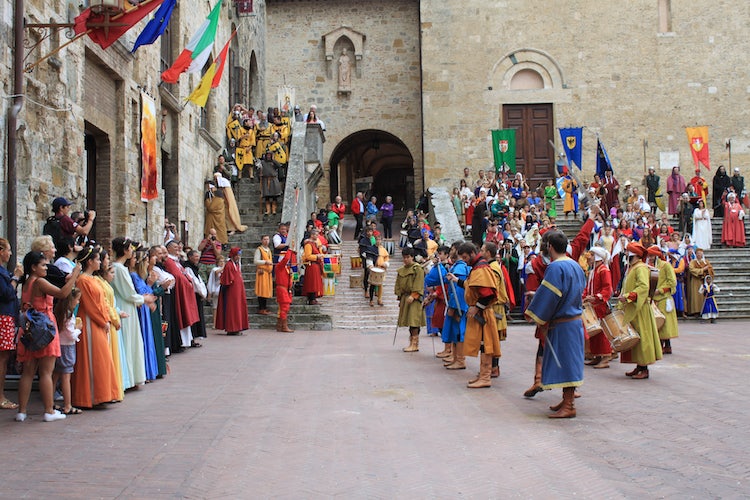 Every year, visitors can count on some of these events on each of the nights of the festival:

Performances showing dances from the Middle Ages, drums by the Tamburi Chiarine and flag-throwing exhibitions by the Bandiere of San Gimignano.

The four "contrade" introduce the knights and horses which will compete the following day (Sunday) during the race "Giostra dei Bastioni". The show continues with other medieval games such as the tug of war, archery and the contest of the "Braid" between the ladies of the neighborhoods. For the rest of the night, the public is entertained with many shows and exhibitions.

The day starts with the Rite of Purification in preparation of the Giostra dei Bastioni, where the horses and the public receive the Holy Blessing in Piazza Duomo. Later, you can attend the archery competition and finally the most awaited moment of the festival: the Corteo delle Messi or Grand Procession, where over 500 people in medieval costumes parade across the streets of the historical center. At the end of the corteo, the exciting Giostra dei Bastioni begins where knights prove themselves in a horse race during which they have to strike a helmet hung on a pole to win the Gold Sword, symbol of wealth and fertility.

You can view updates on their Facebook page, which is generally kept more up to date than the official website but check that too closer to the date for full program.

We hope you enjoy the event and the jump back into the past! 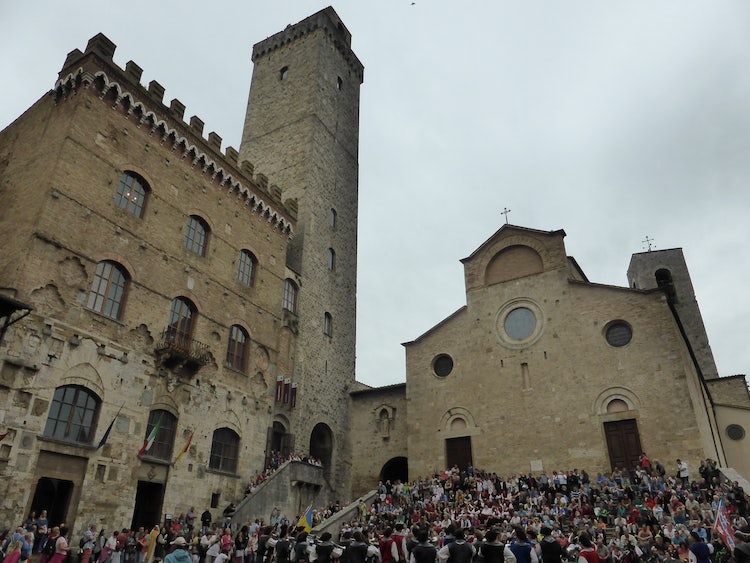 View some pics of the lovely village of San Gimignano! »