The Abbey of Monte Oliveto Maggiore

A moment of Silence in an interesting landscape

When exploring the beautiful area of Crete Senesi in the eastern part of Siena countryside, one of the places you should definitely not miss is the Abbey of Monte Oliveto Maggiore. It is situated in a beautiful position between typical forms of eroded soil and a forest of cypresses and oaks. 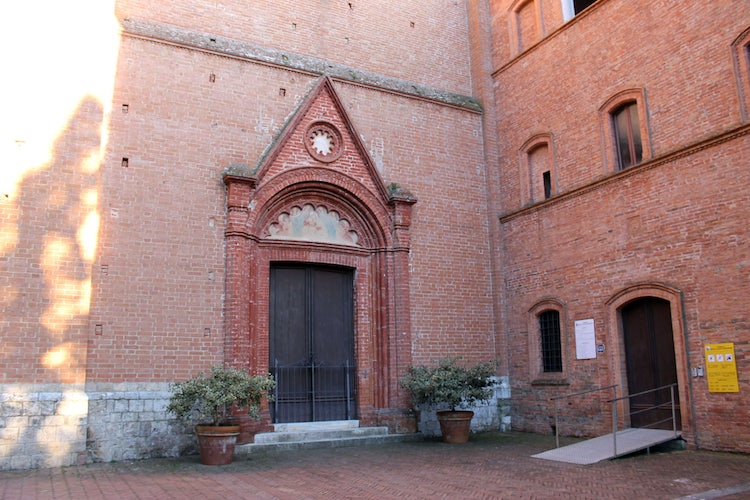 The Abbey was founded in 1313 by Sienese Bernardo Tolomei who retired in this isolated place, property of his family, after he converted to Benedictine order. Some years later he began the construction of the Abbey. The structure as you see it today has been completed during the following centuries. 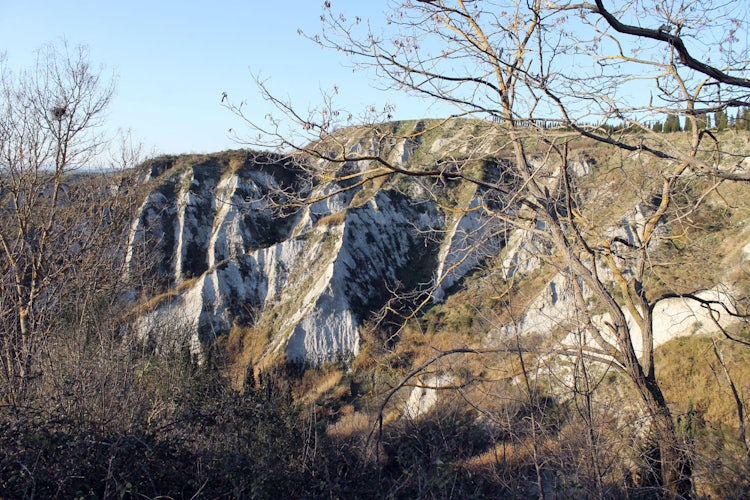 The church, in the form of a Latin cross is very luminous and inspires one to slow and and meditate on the peace and beauty found within. There are many famous artist whose works fill the Great Cloister, the church and the surround rooms and buildings. Even a ornate Crucifix from the early 14th century which is believed to have spoken several times to the saint with words of comfort and wisdom. 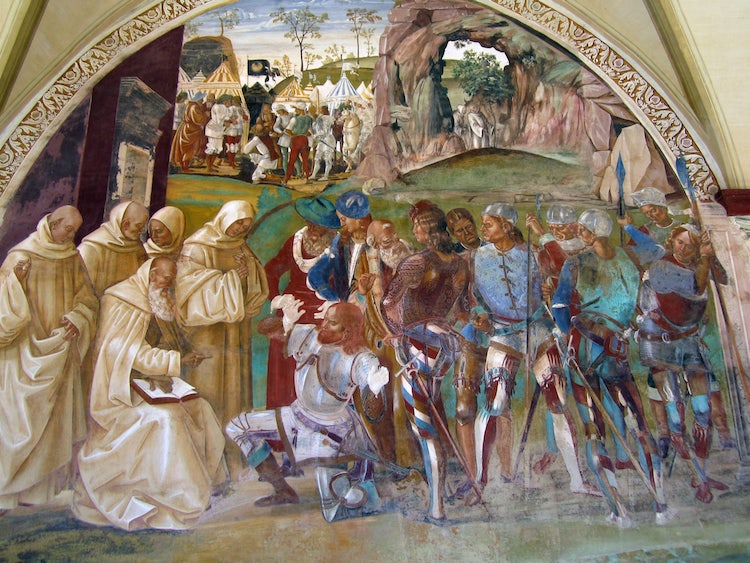 Stay in the Crete Senesi

This area is a perfect base to explore all of southern Tuscany, as well as Siena. Check out rentals by owners reviewed by our team and book your stay direct at the best prices.

From the parking area you enter the Abbey on foot thru a massive fortified medieval building with a square tower and a drawbridge. Above the entrance is placed a beautiful Madonna and Child in glazed terracotta probably of the famous Della Robbia family production. In this entrance building is now situated a restaurant and bar with an outside terrace. From here you continue on a long avenue lined with cypress trees, about halfway you will encounter a large 16th century fish pool and at the end the Abbey will appear before you. 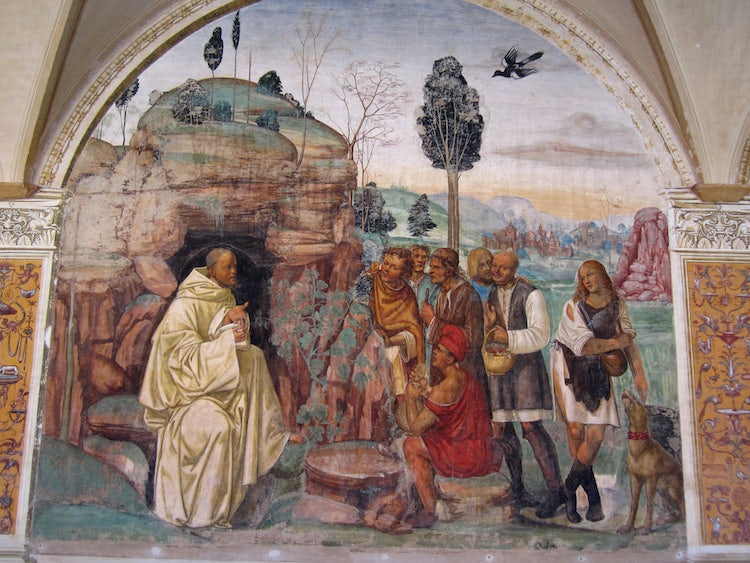 The church was constructed in the beginning of the 15th century, but the interior was transformed in baroque style in the 18th century. Upon entering the church, the carved and inlaid wooden choir is especially noteworthy. In fact, it is a real masterpiece made by Fra Giovanni da Verona in 1503-1505 and one of the greatest examples of inlay work in the world.

If you want to assist the mass with Gregorian chants, make a note that it takes place on weekdays at 7.30 am and on weekends at 11 am. More details here

Frescoes at the Great Cloister

The real attraction of the Abbey are definitely the frescoes of the great cloister. There are 35 frescoes which cover the entire surface of the four sides of the cloister and depict the life of St. Benedict. First artist who started this enormous work was Luca Signorelli in 1497-1498 and then Antonio Bazzi, called Sodoma, who continued the paintings after 1505. The incredibly vivid colours and many details of the paintings give a fascinating view of the life and of the landscape of the time. These frescoes are justly considered masterpieces of the Italian Renaissance. 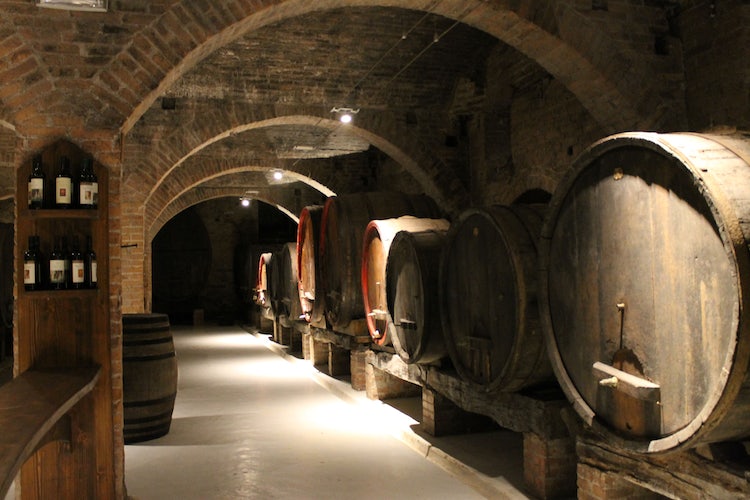 In the upper courtyard on the side of the church you will find a shop with souvenirs and some products from the farm of the Abbey. What about a herbal liqueur of the monks that will surely cure any disturb? Before leaving the Abbey, don't miss visiting the wine cellar below the cloister. You can admire giant wine barrels containing the wine produced with few selected vineyards of the surrounding area and taste it with the expert guidance of Luca. He is not a monk himself, but with many years alongside the monastic life he can tell you many interesting stories about the Abbey and its life. Wine tasting is free, but after half an hour talk about everything between heaven and earth who could leave without bringing home a bottle or two of the wine of this special place! 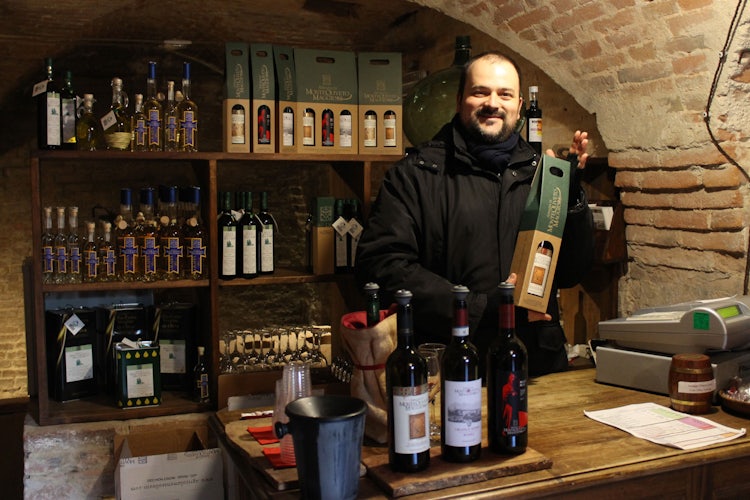 If you are driving the old Cassia road from Siena you can reach the Abbey from Buonconvento, taking the SP 451 "Monte Oliveto". Another possibility is if you are travelling from direction of Siena is to go through Asciano, about 10 km from Monte Oliveto, and this itinerary allows you to enjoy the beauty of the countryside at the heart of the Crete Senesi area.

If you want to admire the Abbey from a distance to get an overview and to take some nice photos, make a visit at the nearby village of Chiusure. In this tiny hilltop village, you can stop for a lunch break and climb until the panoramic terrace to see the Abbey immersed in the green forest between the surrounding hills.

Plan Your Visit to the Abbey of Monte Oliveto Maggiore