A monumental legacy in Cerreto Guidi

Positioned on the top of a dominant hillside a mere 40 km outside of Florence, the Medici villa, with UNESCO status, sits in the center of the enchanting and busy little town of Cerreto Guidi. With its ancient roads swirling around the villa in concentric rings, a visit to this monument is like taking a step back in time, to the epoch of the Grand Dukes of Tuscany.

Built on the ruins of the castle from the feudal lords Count Guidi, the villa started as a hunting lodge for Cosimo I, who enjoyed extended trips into the countryside far from the stress of court life. He enjoyed indulging in outdoor activities, including long walks, fishing, and hunting. 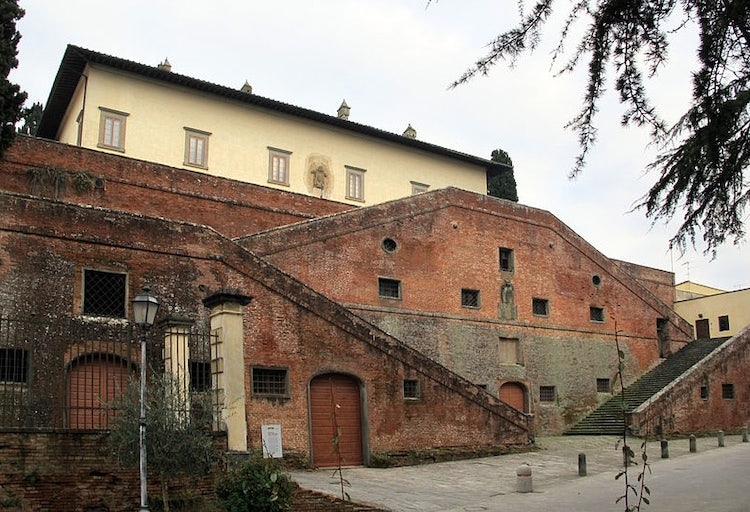 This land belonged to Cosimo il Vecchio and later Lorenzo il Magnifico, who were both intent on building their real estate investments in the countryside with the aim of extending their authority and dominion within Tuscan territory. The fertile land, both for the harvest and fauna, made this area an obvious choice.

After the familyline of the Medici was extinct (1738), the villa passed to the Lorraine family and was then subsequently sold to private individuals. The villa finally returned to the State in 1969, and later became a national museum. 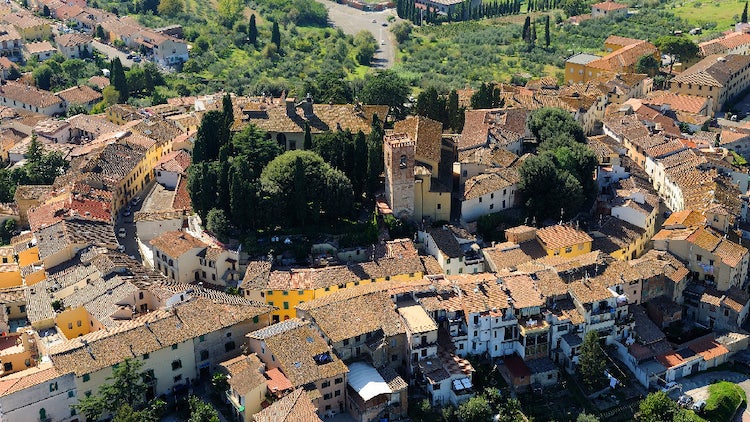 The Form of the Medici Villa

As you approach the villa, you will have to use your imagination to see the original structure: a relatively simple hunting lodge. It has since grown in size and prestige and is now included in the vast patrimony of the Medici family which has been turned over to the State of Italy. Today, the imposing two-story structure, covered by a large pavilion roof, features a façade characterized by a “calculated sobriety” with only a few decorative elements around the door and frames of the windows. The rear façade sports a portico with rounded arches on pillars with unadorned bases and capitals.

By the will of the duke it seems that the construction of the original nucleus of the villa, initially a simple hunting lodge, began around 1555. However, from documentary sources, the beginning of the imposing construction of the Medici residence can be traced back to November 1564.

The floor plan is organized around a central hall which can be accessed directly from the main door and at the back of the entrance hall are the stairs to the upper floor. The villa also has a lovely garden open to the public, however, it is not as as old as the villa dating back to the 19th century. 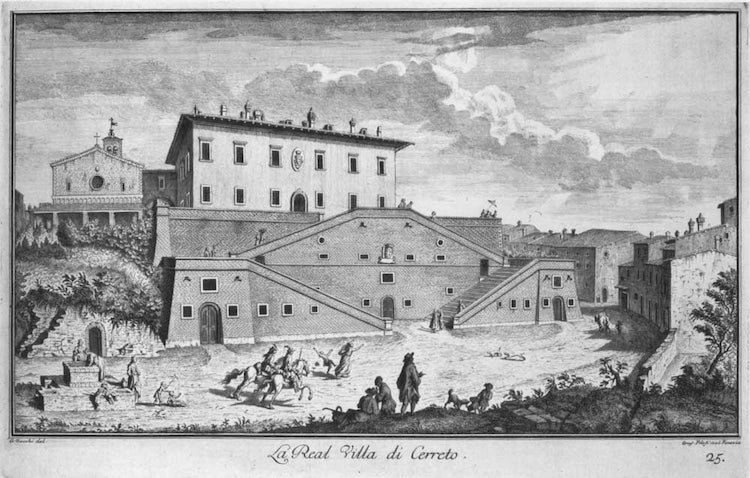 Much of the construction material for the estate was actually recovered from the remains of the destroyed Rocca, the towers and the 14th century defensive walls on which the villa was built. The Duke used manpower recruited through the "command system" which meant mandatory and, sometimes, semi-private workers.

Bernardo Buontalenti entered the service of the Medici as a youth and remained with them the rest of his life. He is said to have been instructed in painting, in sculpture and in miniature painting. More than a painter, he was celebrated as an architect; in this role, he designed fortifications, villas and gardens and is considered an important architect of the Mannerist period.... and don't forget, he was also the inventor of gelato!

The exterior of the villa, its  floor plan and internal decor and arrangement is loaded with symbolic imagery which a visitor, during the time of its construction, would have easily recognized as being part of the Medici domain.

These symbols evolved over the years due to the precise use of an architectural language created for the Medici family.

The architectural code was developed and approved by their skilled architects, like that of Giuliano da Sangallo who was responsible for many of the work done by the Medici family. 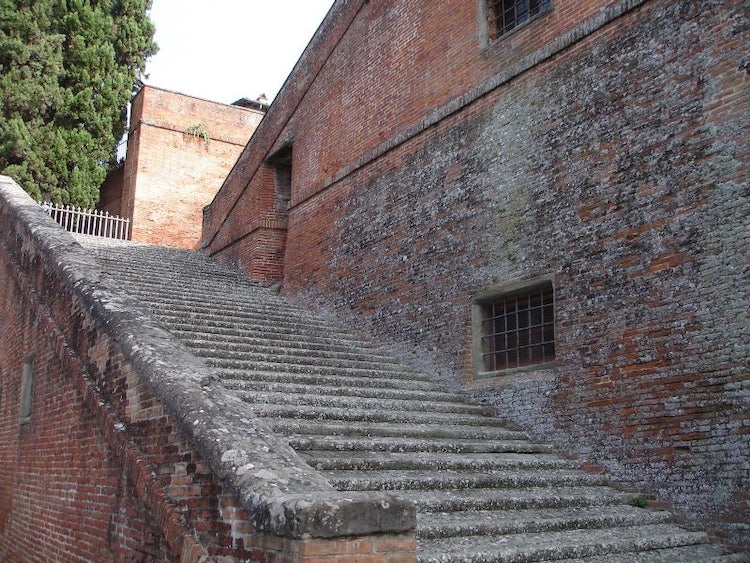 It is believed that Buontalenti was responsible for the design of the distinct red brick and Gonfolina stone "ramps" here, also called "Medici bridges" or "scalee medicee" which create a striking contrast with the light plaster of the Villa's façade. They were a valuable addition since, not only did they ensure an easy access to the villa, but also created a useful, and necessary, retention system for the embankment, which had collapsed on various occasions over the centuries.

The openings on the ramps once allowed access to the stables. The square in front of the villa below the steps now serves as the perfect stage for the many events that are held in Cerreto Guidi including the Palio di Cerro in September and the Notte d’Isabella in July.

The panoramic view from the terrace facing the villa is extraordinary, ranging on a wide spectrum of the Apennines and the hills between the Arno and Padule di Fucecchio. 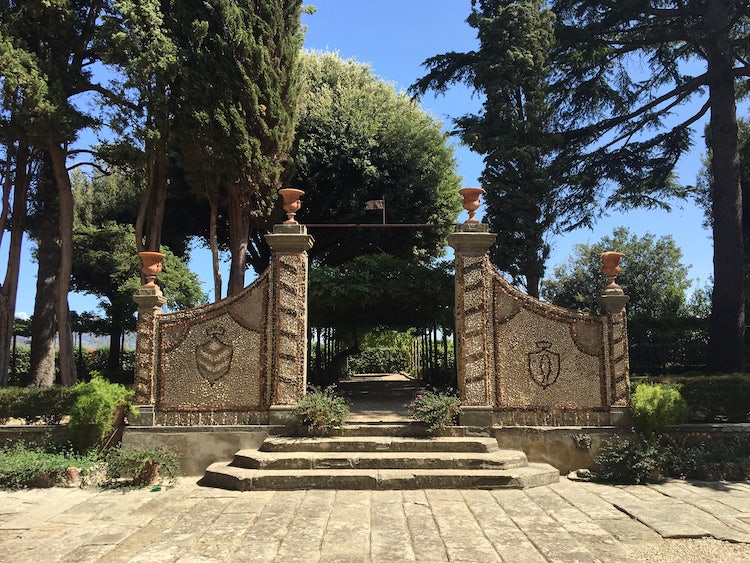 Since 2002, it is among the few Medici villas, along with its adjacent garden, to be open with a regular and continuous hours. In addition, the villa offers free guided tours and organized cultural events. The villa hosts the Historical Museum of Hunting & the Territory which corresponds perfectly with its original intent, even though in its later years it was used more as a residence than a lodge.

The main exhibition focuses on the relationship between hunting and the Tuscan territory, in particular its historical evolution: hunting passing from a survival skill to sport and social activity. Touring the first floor of the villa one can appreciate a collection of weapons, mainly from hunting and shooting of the 18th-19th centuries. Among the most valuable specimens are some weapons belonging to the Grand Duke Pietro Leopoldo and Ferdinando III of Tuscany. 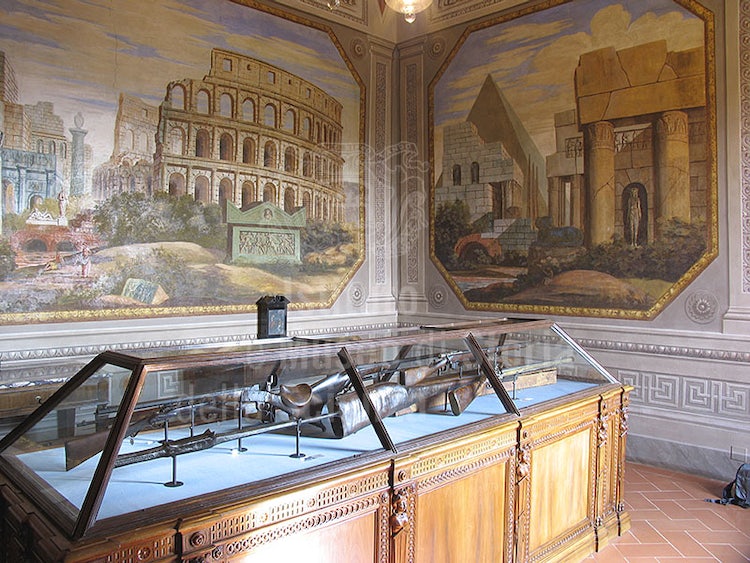 On July 15, 1576 the villa was the scene of the brutal murder of Isabella de' Medici by the hand of her husband Paolo Giordano I Orsini, duke of Bracciano. According to tradition, she was punished for her infidelity. Since then, it is said that the ghost of the sad Isabella still roams around the villa seeking peace. So, if you are looking for a bit of mystery, then be sure to visit the room in which Isabella de' Medici, daughter of Cosimo I, was strangled by her husband Paolo Giordano Orsini for suspected infidelity in 1576 -- which IS open to visitors!

Besides the museum collection, there are also several elements that make up the interior decor of the villa including: four 18th-century tapestries depicting the seasons, furniture and wall frescoes from various periods and several prized pieces of art, including several famous women artists.

It also features a fine collection of portraits of the Medici family and various pieces of a Roman and Romanesque-Gothic lapidary object. There is also the preferential corridor that the family used to attend mass that was held in the adjacent Pieve di San Leonardo. The family could attend the function from a small corridor upstairs hidden by wooden grates which were opened by a small gate at their request.

Finish up your visit by visiting the gardens and then strolling into town, where you can still feel the atmosphere of the families that once ruled this area. For more information on what to see in town, read our guide for Cerreto Guidi which includes details about monuments, churches and local points of interest. 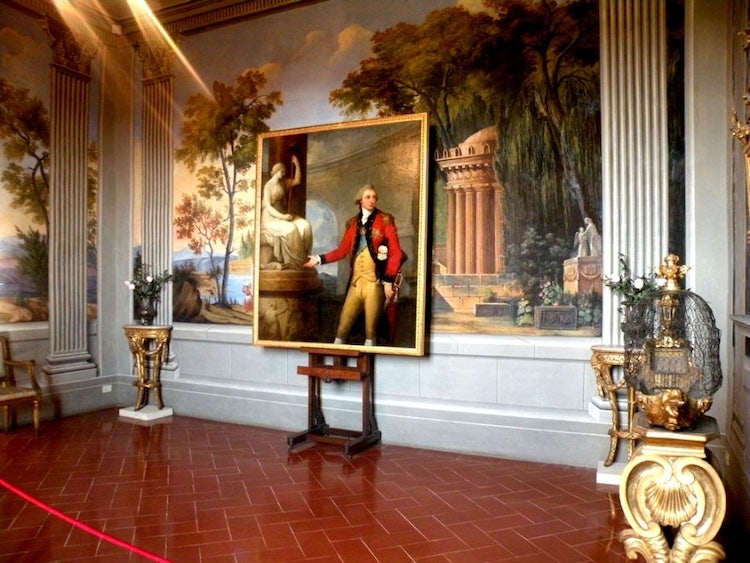 second and third Monday of the month, New Year, May 1st, Christmas