At the Northern Most Point of Casentino

The tower castle of Porciano, located in the hills of Casentino (the very same ones that give birth to the Arno river flowing through Florence) is one of those places that just fascinates me. This most probably stems from the fact that I have had the privilege to meet Flaminia Goretti de Flamini, the charismatic whirlwind who was partly responsible for its restoration.

Or it could be that I had the unique opportunity to work with her daughter Martha, the present day owner, and listen to her personally tell the story of the Castello. Or perhaps it is because the Castello di Porciano is an incredible site to behold, even if it doesn’t fit our Cinderella idea of what a castle should look like. 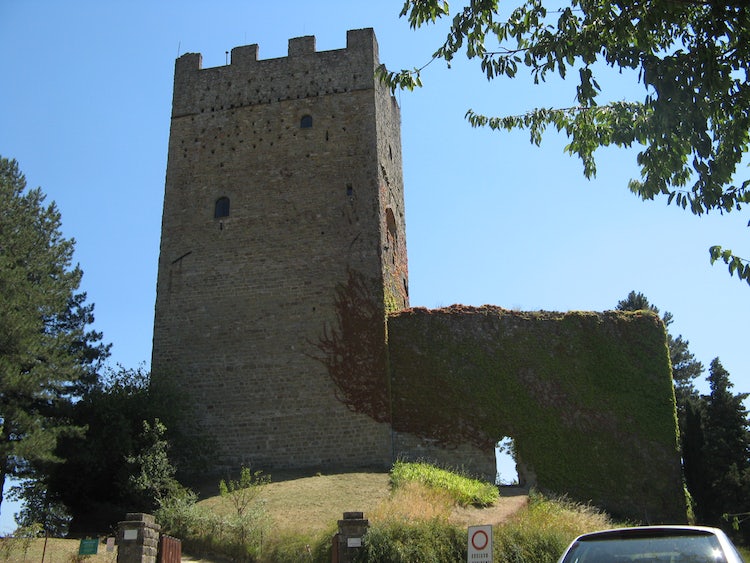 Why anyone would refer to the first time a building, person or piece of artwork was “mentioned” in a document? But once explained - it seems so obvious!

“Way back when”, it wasn’t like they deposited the blueprints at the local government land registry department! If historians want to have an idea of when anything (buildings, towns, families and even artwork) started to exist, they have to troll surviving private documents, legends and stories, taxes reports (because even if there wasn't a land registry...there was always a tax office!), church donations, even private diaries in order to find the first time someone wrote about the object.

And then they can begin to create a timeline.

Martha is an energetic woman who has a wide range of interests foremost of which is her family She has a great deal of knowledge about the castle and the time in which it was built including customs, trades and skills required during the medieval period. The enthusiasm for her family home seems to permeate all that she does and it is easy to get caught up in her passion. In fact, she is an extremely talented teacher who offers courses for kids of all ages at the castle about several things including weaving and the traditions of the early farmers.

So where do we start?  The best date we have for the castle's founding comes from a document which mentions the castle in the year 1000.

As you look up at the castle, the first thing you note is… there’s not much there.  I mean the building is integral – but it’s . . . just a tower and at this point you might find yourself wondering… is that all there is? And I am here to tell you:  Yep, in the year 1000 this was pretty much all they needed. Actually, this type of structure had one purpose – that was to defend. 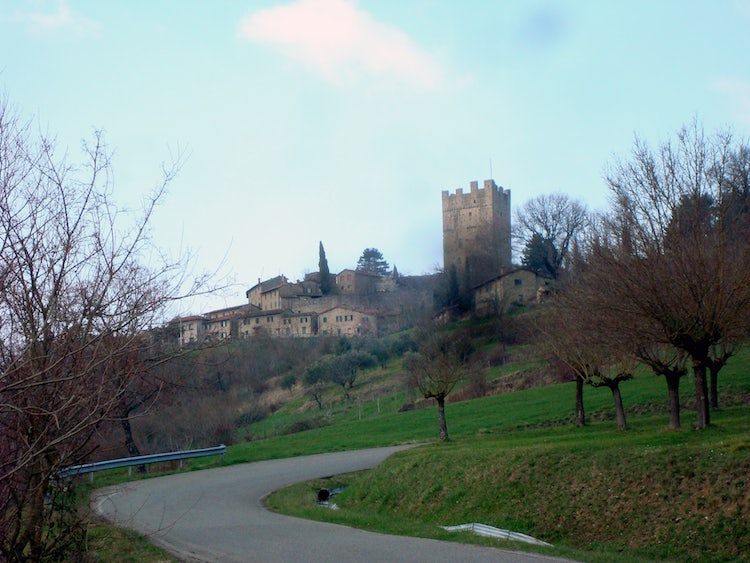 A tall building affords extra protection and was an excellent look out…. and I can definitely back this up since I have visited the roof top terrace of Castello Porciano and seen the spectacular views. This view included a clear shot toCastello di Romena and behind that, the Castello of Poppi, (and probably several other castles which are no longer visible). Important because... ? Well how else would they be able to relay messages and warnings from stronghold to stronghold since neither place were originally built with telephones or WiFi?!

I loved: restored with criteria, great learning experience for all ages, perfect for a little stroll.

Remember: no cafè, restaurants or stores – so if you want to picnic, bring it with you; only open on Sundays and holidays, a little off the beaten track (but worth it).

The restoration of the Castello Porciano didn’t start until after 1963 when Flaminia and her husband George, a WWII soldier she met at a dinner party held in honour of the allied forces, inherited the property. But by this time they were practically inheriting crumbling walls of stone. It was with great determination and personal sacrifice that they, together with the Italian government, were able to fund and direct the restoration of the structure which you see now.

The tower is set in a tiny little town – which was almost completely destroyed in an earthquake in 1913. The town of Porciano was rebuilt with several small homes and annexes surrounding the by-then defunct towers. There is ample parking at the foot of the town, and if you follow the cobbled stoned path you will find yourself winding in and out of tiny alley ways and dead ending in short little roads. It’s quite the labyrinth – but it is hard to get lost because it is so small. Once you finally find the right exit and head under the stone arched walkway that opens to the garden surrounding the castle it will transport you to another time; the ivy covered walls and the looming tower will touch a cord inside of you of awe and peace. 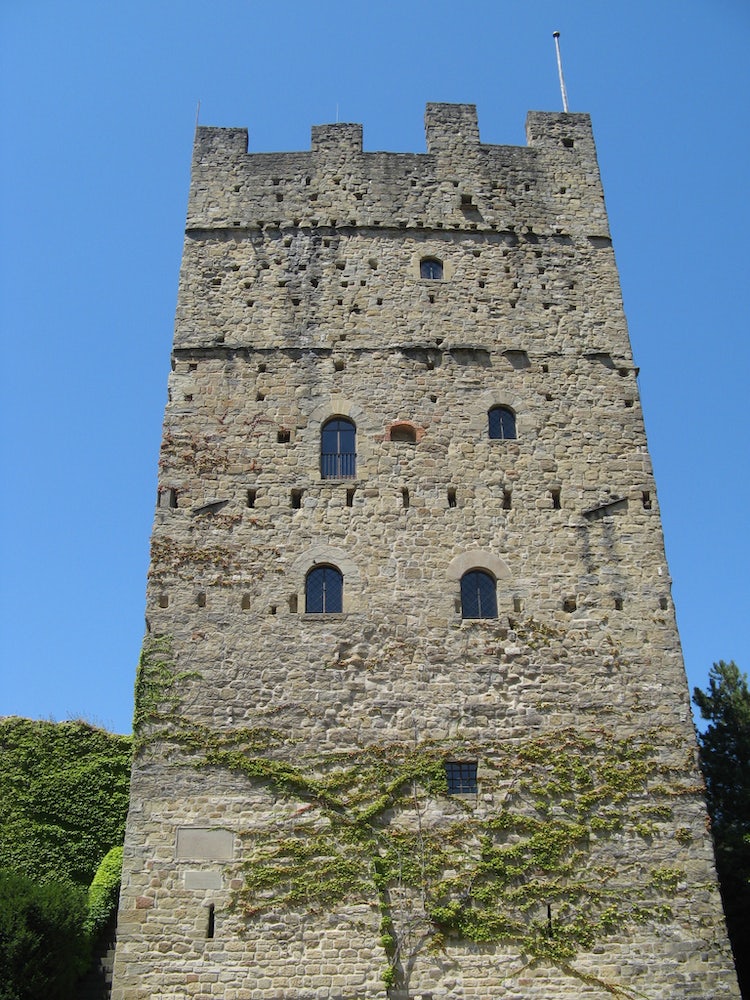 A tower or what is also known as a fortified residence was a necessary first step for the original residents, the Guidi family.  It was the survival mode that required high land, with natural obstacles like steep rocky hillsides, which would assist in the defense of their home and for the protection of their followers. As their position became stronger, their buildings became more.... one could say relaxed. The Castello di Romena, built only about 50 years later, is already an example of a residence of a more secure family; it is set on a lower hillside and the architecture structure is more sprawling, however note that it was still surrounded by protective walls and several towers.

Today as you look at the castle, you will note there is a private fenced garden around the tower.  Apparently the original property included the tower, which was in an awful state, and only about three meters of land around it. The family acquired the surrounding land and turned it into a beautiful green garden where they will occasionally arrange concerts and shows during the warmer months.  If you look to the right, you will see the remains of another tower and to the left, there is a second completely restored tower. There is a little museum where you can get a better feel of the original structure of the castle. It is open from May 1 to October 31, only on Sundays and public holidays: 10 a.m. – 12 p.m. and 4 – 7 p.m. And though there is no ticket entrance, a donation goes to the general upkeep of the public areas. Please note, that though I will mention it below, the family residential portion of the tower is not open to the public.

There are few concessions to modern day life in the castle, but the lift/elevator is definitely one of them.  It is normally used to go to the living quarters starting on the 4th floor but, upon request, it will accommodate those who have trouble managing the stairs.  However, if you really want to get a feel for the life in a tower, take the steps to visit the upper levels. As you enter through the side door, surrounded by ivy, you will see that the ground floor houses a collection of antique tools used by farmers in Tuscany and a special private collection of American Indian artifacts which were given to Martha’s father, George Sprecht, when he lived in Minnesota as a child. 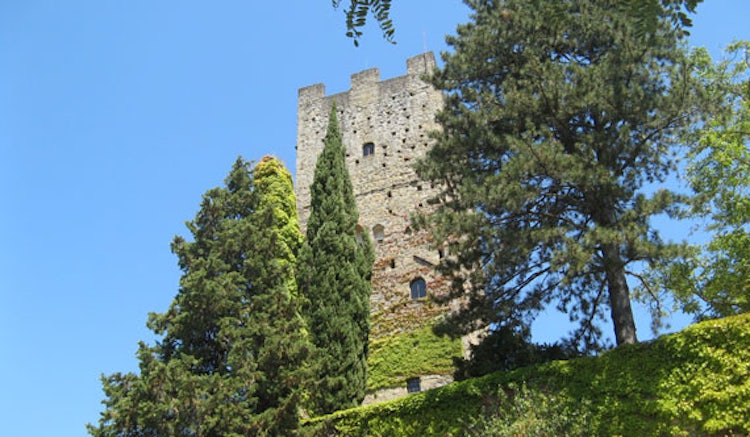 Ask for a Guided Tour

The first floor houses artifacts, especially ceramic pieces from Medieval and Renaissance times, which were found at the time of renovation. There are also large photos with descriptions detailing the various repairs needed to stabilize the tower. The restoration of a property of this importance is dictated by several government laws and safeguards to protect the integrity of the structure and the history that it encases. The black and white photos and drawings will effectively communicate the devastation that Flaminia and George first encountered when they started to rebuild this unique piece of history. Each step of the recovery was recorded and you can follow it step by step on this floor.

The second floor opens to a large room, called the Salone di Dante, or Dante’s Hall.  Dante Aligheri is widely accepted today as one of the more important figures in Italian literature. In the 1300’s, he was exiled from his home in Florence and spent considerable time in the Casentino Valley between the castles of Romena and Porciano. The family will often use this space for small concerts, events, poetry readings and theater presentations.

The upper stories of the castle house the family’s residence, Martha often compares living in a tower like living in a tall sailboat – because your space is limited and many times you need to invent creative storage spaces and furnishings without taking away from the uniqueness of the building. 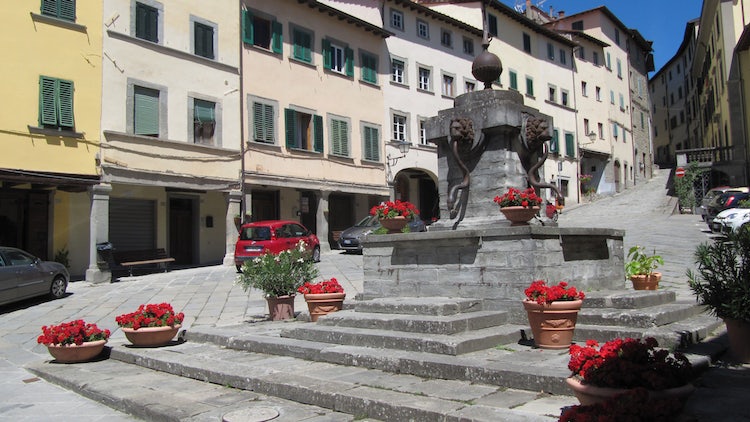 Not too Far Away

There is plenty of room to walk around the exterior of the Castello and explore the countryside includng a small little cemetery and a dusty dirt road which lead into the nearby hills. If you are going to want to picnic here, bring it with you because the little town of Porciano has no restaurants, cafes or shops. Or you go back down to the town of Stia where you can get a great meal including tortelli (a potato filled ravioli traditional to this area) or go swimming at the faux beach they have created on the banks of the Arno river.  I am warning you though: the water (no matter what time of year it is) will be freezing cold!! But in the summer sometimes that's just what you need.

For more information on the family history, check out this interesting brochure.

Next time, we will explore the Castle of Poppi, a fully restored tribute to the Guidi family located in the heart of Casentino.