A Man-made Paradise near Florence

In a fantastic green corner of Tuscany covering 1,270 hectares just southeast of Florence, you will find the perfect area for hiking, history and beauty: Vallombrosa!

This place means many things, primarily: 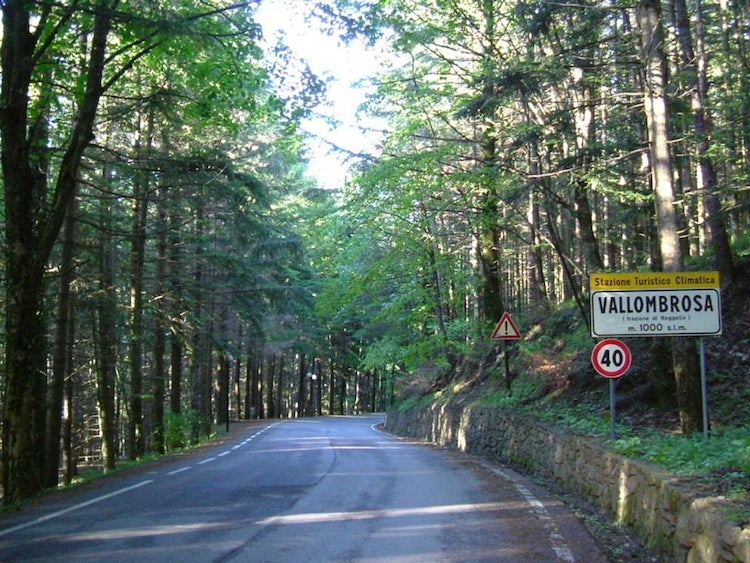 Synonymous with tranquility, uncontaminated nature and forest land which ranges in altitude from 450 to 1450 meters above sea level, Vallombrosa is a man-made haven.

It is situated between in the valley of Casentino, an area well known for its green national park, age-old monasteries, and castles,  and Valdarno, where the Arno River flows north towards Florence passing Loro Ciuffena and the colorful road trip itinerary for Setteponti.

This area makes a great base for your vacation combining the wine making history of Tuscany with its natural beauty and tranquility.

Find a Place to Stay

For many persons, this shady mountain top is the perfect place to admire the fall colors in the valley, while for others it is a spiritual retreat where one will find the famous Abbey of the Vallombrosan monks.

And yet for others, it is a museum of sorts, offering a home to a wide variety of native and non-native trees.

If you need to slow down while on vacation or you just find it easier to re-charge while surrounded by the sounds of nature, watching the fluttering leaves (in all seasons) and the occasional sighting of a deer, rabbit or fox, then you can't miss the opportunity to add this stop to your itinerary.

The Monastery, of the Benedectine order

What now stands as an imposing Abbey, started as a small wooden hut by Giovanni Gualberto, a Florentine noble in the XI century. He made the decision to abandon his luxurious lifestyle and went into the forest searching for an isolated place where to pray. It is here that the new order of the “Vallumbrosan” was established, based on St. Benedict's rule “ora et labora” (pray and work). 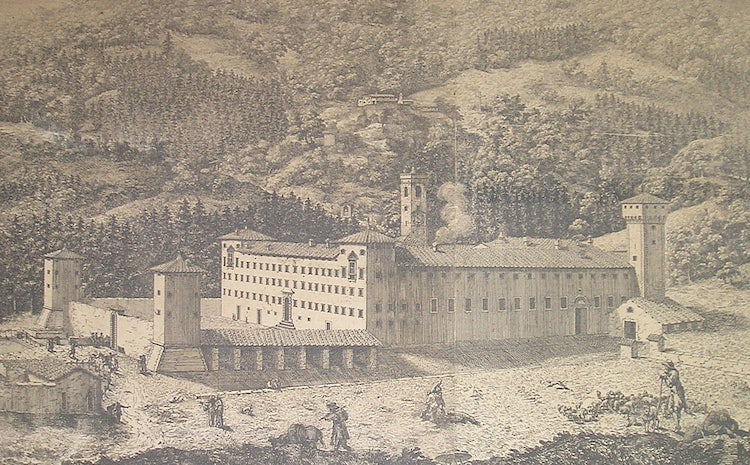 In the year 1036, work began on the construction of the cells and then the oratory. However, it wasn't until much later that it began to take on its present look when in the 1200s the bell tower was added, and in the 1400s the monastery was extended. Then a defensive tower was added in the 1500s, followed by the wall in the 1600s and the fishing ponds in the 1700s. Even with all of these constant renovations and an attempt to redecorate in the baroque fashion, the Church still preserves its medieval austerity.

In addition to the Abbey and the monastery complex, there are several chapels, tabernacles, and crosses throughout the wooded area that refer to particular episodes of the founder Gualberto's life and can be explored with a short walk through the trees. Follow the trail “Scalinata del Calvario” (the Steps of Calvary) leading from the Abbey to a special dedicated green area called “Paradisino” (small paradise), where once upon a time the hermit monks withdrew for pray and silence. 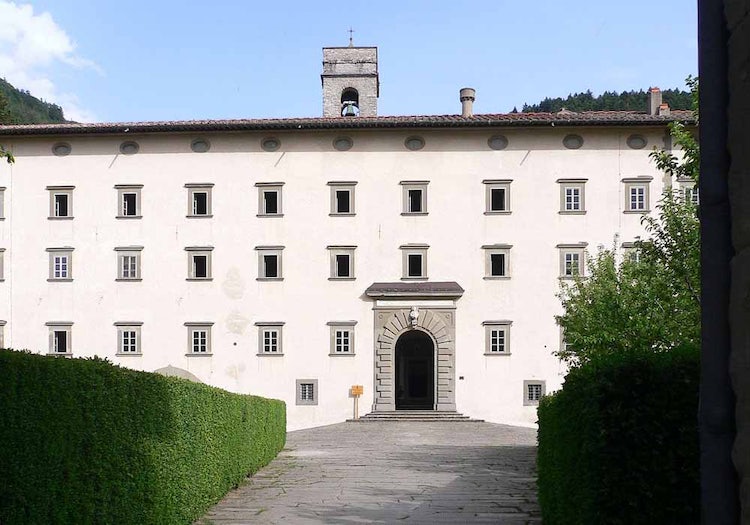 The spiritual aura may give you a reason to think that the Benedictine monks have always made the abbey and the forest their home but like so many structures, the monastery was suppressed during the Napoleonic era. While holding several titles during the course of the years, perhaps, other than the religious function, the role that changed the structure and the landscape the most was when it became the headquarters of the Royal National Forestry Institute up until 1913. It was only after World War II, which played out in this area with strong partisan support, that the monks finally returned to Vallombrosa.

Once used as the stalls at the Vallombrosa complex, the Library, the heart of many monasteries, was built between 1587-89. During the period that the religious order was literally kicked off the premises, many pieces of furniture, manuscripts and important objects related to the cult were lost, destroyed or saved by being re-allocated to museums or private collections.

If you look in Florence, you can find the altarpiece “Assumption of the Virgin” by Perugino, made for the high altar, now preserved at the Accademia Gallery and the “Vallombrosian Altarpiece”, painted by Andrea del Sarto for the Hermitage of the Cells, is now dismembered and preserved in the Uffizi Gallery. 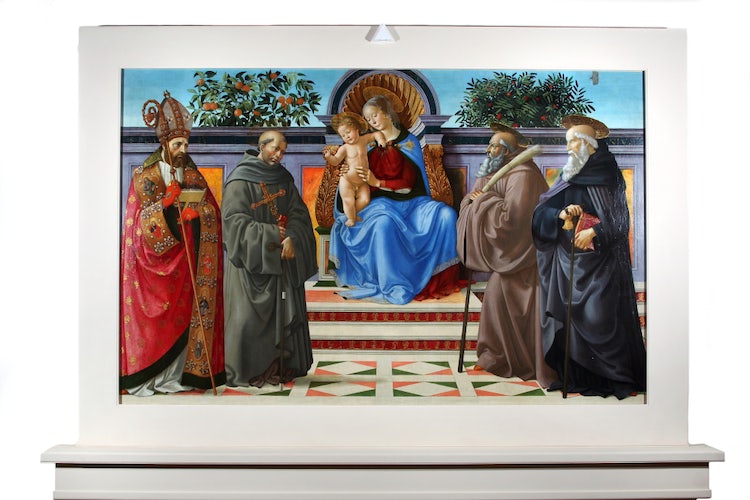 Commissioned by the monks shortly after 1485, the above painting was placed on an altar dedicated to San Giovanni Gualberto, the founder of the order. Only recently restored, it has been attributed to the Ghirlandaio workshop.

The monks made it a goal to re-establish the Library to its former glory in addition to enlarging the area to include a Modern Library. Some of what you see today is original, for example, the current shelving dates back to the first half of 1800 and there is a large painting by Donato (fr. Arsenio) Mascagni which was painted in 1609. As you walk around, be sure to note the large octagonal polychrome tarsia table of 1857.

Another fundamental element of many monasteries was the pharmacy, a combination of a service that provided a viable income for the monks to pay for their work and their home and a way to honor God by caring for the fauna and plant life. This activity included not only creating medicines but also “elixirs” which are still available at the Antica Farmacia dei Monaci Vallombrosani. You will also find a variety of honey, candies and other little delicious goodies that once would have been crafted right here at the complex by the monks themselves. 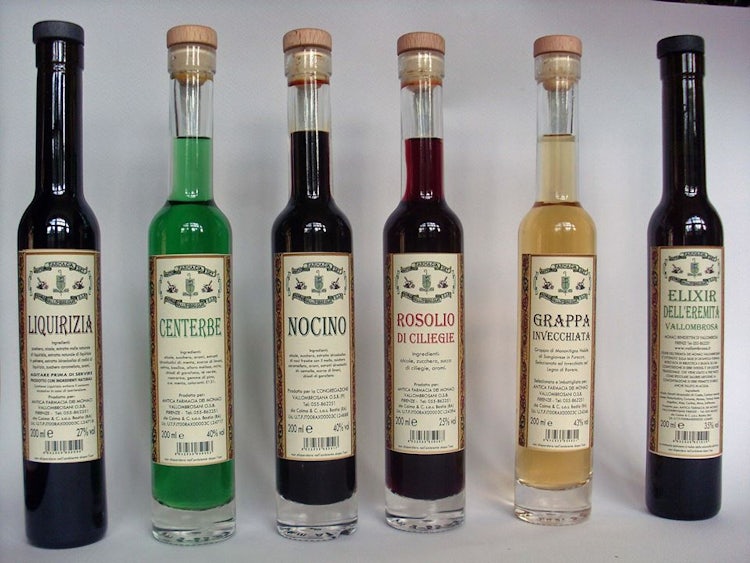 Opened in June 2006, the museum displays most of the Abbey's remaining artistic works together with a few exhibits that come from other Vallombrosian institutions, like that of Santa Trinita in Florence. You will find a wide variety of “treasures” that range from religious vestments, paintings, books and illustrated manuscripts (13th-15th century), many of which come from the Abbey's library, to objects of everyday use, like pottery or ancient missals.

Several important examples of scagliola work moreover testify to this unusual artistic activity practiced by Abbot Enrico Hugford, who developed this technique to the highest degree in the 18th century; using predefined designs, his method was that of mixing selenite gypsum with various shades of colour to create a form of false inlay. To learn more about this technique, read about and visit the Opificio delle Pietre Dure Museum in Florence. 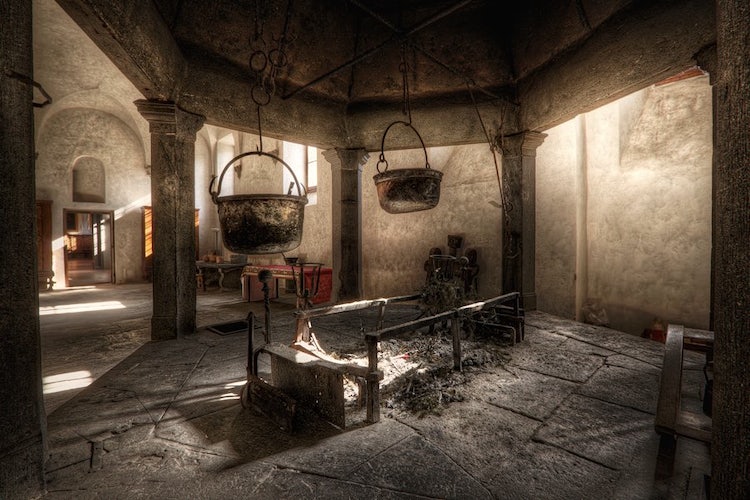 In the adjoining room, there is a display with 14th-20th century liturgical furnishings that include chalices and reliquaries. One of the most fascinating exhibits is the “Reliquary of the Nail”, in gold, enamel and a sapphire, donated to Vallombrosa around the year 1230 by St. Louis IX, King of France, in exchange for the reliquary of the hand of St. John Gualberto.

According to legend, angels brought the arm of the saint from the Abbey of Passignano, where his body is preserved, and it was placed inside the great Reliquary of the Arm, in gilded silver, enamels and precious stones.

As noteworthy as the abbey and the monastery are, you can't help but notice the forest that surrounds the complex. Many have never even heard of “the practice of controlling the establishment, growth, composition, health, and quality of forests” or what is known as silviculture.

According to the Benedictine monastic traditions, the monks practiced this as part of their creed and the landscape of the monastery is “characterized by the presence of artificial pure standings of Silver Fir (trees).” They have quite literally left a mark on the world, especially the territory just outside of Florence. 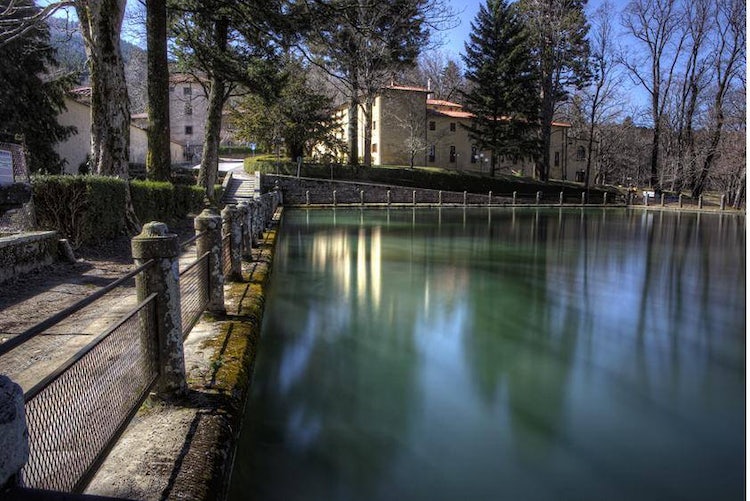 Though many religious cults took particular care of the wooded areas surrounding them (just look at Camaldoli only a bit further into the valley and the land which is now the base of the National Casentinese Park), the difference is that the monks at Vallombrosa concentrated on only fir trees. This may be one of the reasons the park has taken on the name Vallombrosa or “the shady valley”. Their efforts laid the groundwork for the creation of a natural bio-genetic reserve in 1977.

The Arboretums trails make up one of the most important collections of trees in Italy, with over 5000 examples of trees! There are three different trails one can follow for a walk among the greenery, for a peek at Tuscany's fauna and a bit of absolute relaxation. 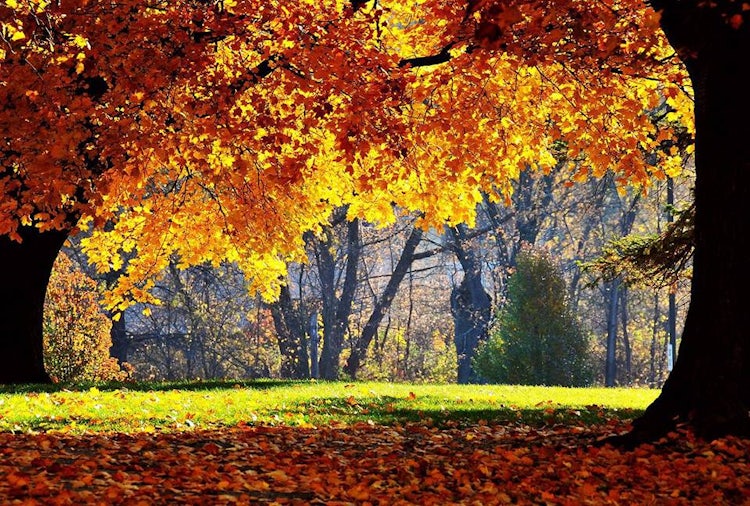 As you look beyond the city walls of Florence and the towers of the many small towns in Tuscany, you will find that this park and monastery offer the perfect combination of natural beauty, local history and spiritual respite for all ages. Hike the trails, examine the museum, pack a picnic and relax in the silence of Vallombrosa.

If you have want to use a bus: The abbey of Vallombrosa is located about 13 km from Reggello, which can be reached by public transport from Florence - though not easily - from Reggello there is public transport to Vallombrosa.
If you have a car: It can be reached from the Autostrada del Sole, coming from the south, exit at Figline Valdarno and following the local indications or coming from the north, exit at Firenze Sud, proceed in direction of Pontassieve via Tosi.