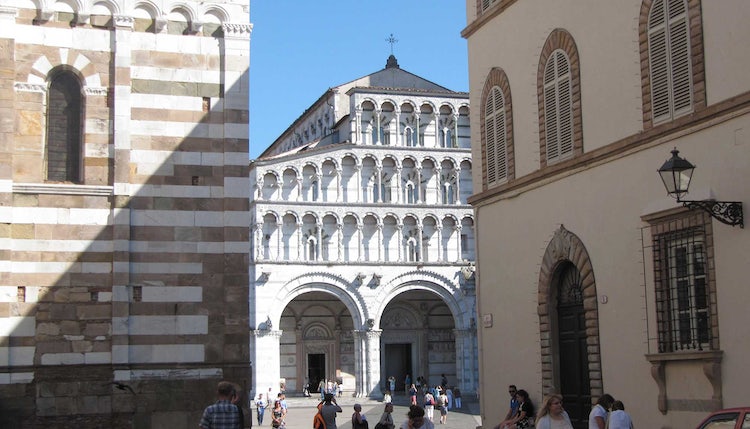 Lucca's Cathedral is located in a secluded location of the old city center, just outside the main tourist itinerary. If you follow the main street called Il Fillungo, or enter in through the walls at the entrance right in front of the train station, you will easy find it.  Look up and use the white-tipped tower as your guide.

Of course, there’s a reason that explains this unusual location: the Cathedral was built during the sixth century, at that period the most central and important areas (from an urbanistic point of view) were already too congested.  In fact it was only later that the more famous square of San Michele, in the heart of the city center, would be chosen for the construction of the church bearing the same name.

See side navigation bar for detailed information and official website.

That’s why the choice fell onto a square where other religious buildings already looked out onto: San Martino Square.

The wide open spaces around the church include Piazza Antelminelli with a simple fountainsurrounded by marble columns; Piazza San Martino, located directly infront of the Duomo; the Museum for the Cathedral, with relevant artwork from the cathedral; and the Chiesa dei Santi Giovanni e Reparata, and the origianl cathedral from the IV century and now hosting an important archeological area. 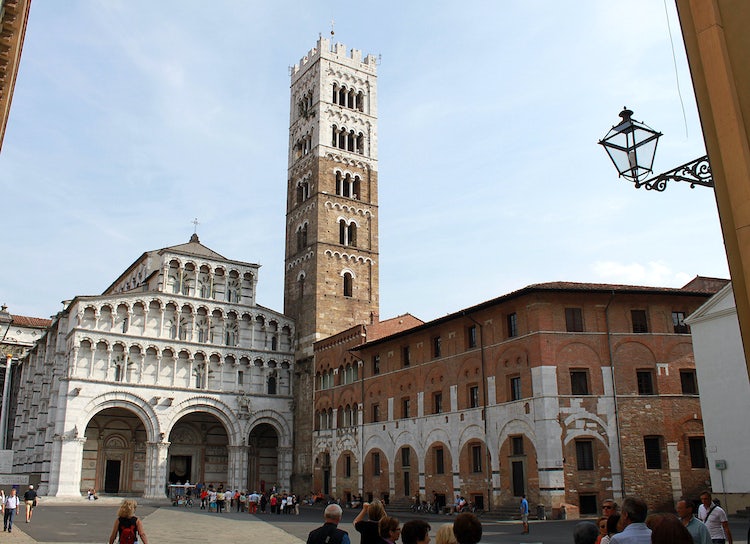 The Cathedral, a typical example of Gothic in Lucca style!

The square may appear a bit devoid of character at first glance, with its wide open spaces and multitude of different architectural styles and buildings from different eras, both civil and religious.  But if you can find a quiet corner to sit and admire the white facade, I believe you will begin to feel the how the Duomo eminates a soft tranquility. No doubt that both the context and buildings are a bit different from those in Florence, but believe me, they’re no less fascinating!

Reworked over the years (several times), the Cathedral humbly stands before those tourists that discover the square for the first time. Consecrated in 1070 by Pope Alexander II, formerly the Bishop of Lucca, the exteroir was later elaborated in the 1200's to reflect its present state.   The interior of the Duomo is where you will find the Late Gothic influence, decorated in the 14th and 15th centuries. 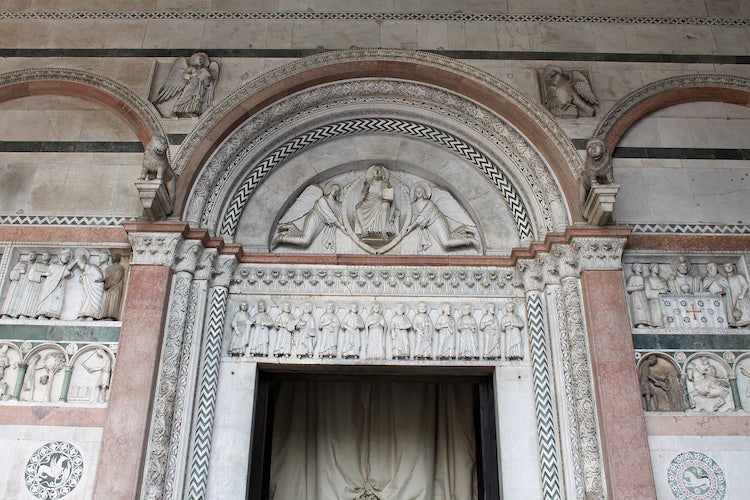 The Cathedral is in both a Gothic and Romanesque style. The polychrome marble facade reminds one of the Cathedral in Pisa.  The principle differences between the two are the  bas-reliefs and representations dedicated to St. Martin, the patron saint of both the Cathedral and the town. There’s also a portico with three arches where it’s said that pilgrims traveling along the Via Francigena used to trade with money changers. Lucca was, in fact, an important pilgrim destination and a point of connection along the Via Francigena route.

The sculptural decoration inside the portico was begun in 1233 and uses pink, green and white marble to magnificent effect. Notice the inticate detail.  Some say that the story behind the mix of columns on the facade origiantes with a competition the Lucca population started to see who made the prettiest; in the end they just used all the entries for this mix matched effect. 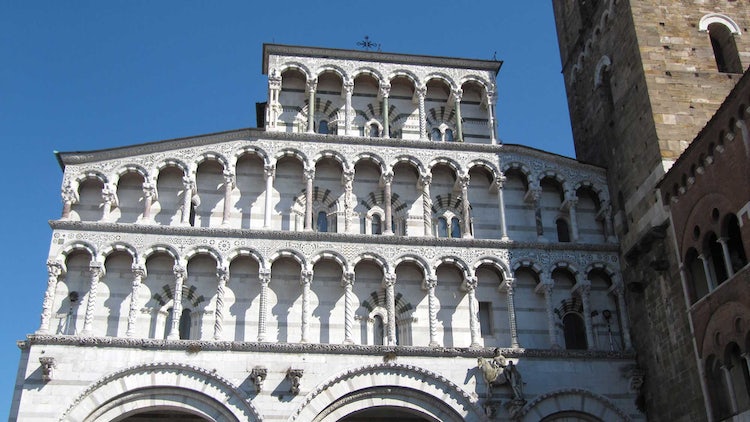 Did you notice how one of the arches is smaller than the other two? That is because they had to accommodate the bell tower which already existed, so they scrunched it in. The base of the bell tower is made of Guamo which is a quartz stone in a mixture of different deep colors, providing a stark contrast to the limestone from the famous San Giuliano caves. Looming almost 60 meters in height you will notice the progressive openings start three floors up from the ground.  If you look at the columns of this smaller arch you will find a stone carved Labyrinth following a Chartres-type design. Some think that this might even pre-date the original Chartres design! The idea behind the maze was that the faithful must rely on God to lead them out.

The Holy Face of Lucca: in a word, Legendary 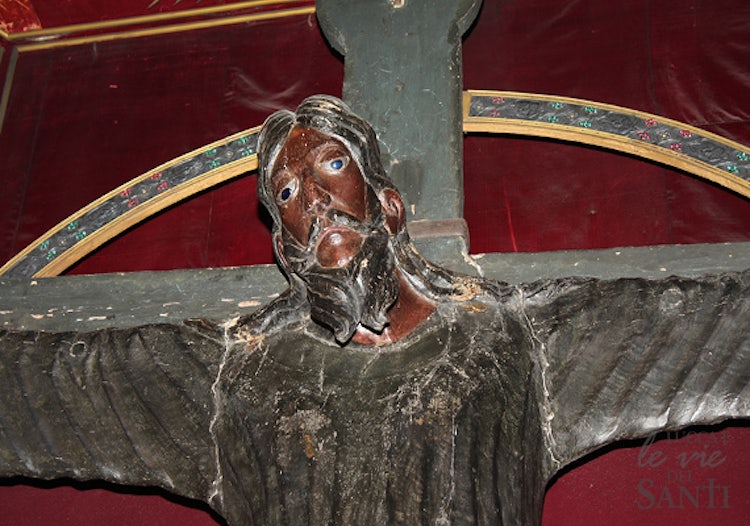 The Cathedral was, and continues to be, home to the famous Holy Face of Lucca, or Sacred Countenance or Volto Santo di Lucca.  This is a venerated wooden crucifix, with a robed Christ. The crucifix is the prestigious protagonist of the Holy Cross celebrations, an important event that traditionally takes place on the 14th of September in Lucca, with a Luminara through the streets on the eve of the day before. It’s an amazing and enchanting occasion for taking a walk through the tiny streets of Lucca's center, completely lit up with candles and lamps, a gorgeous sight! 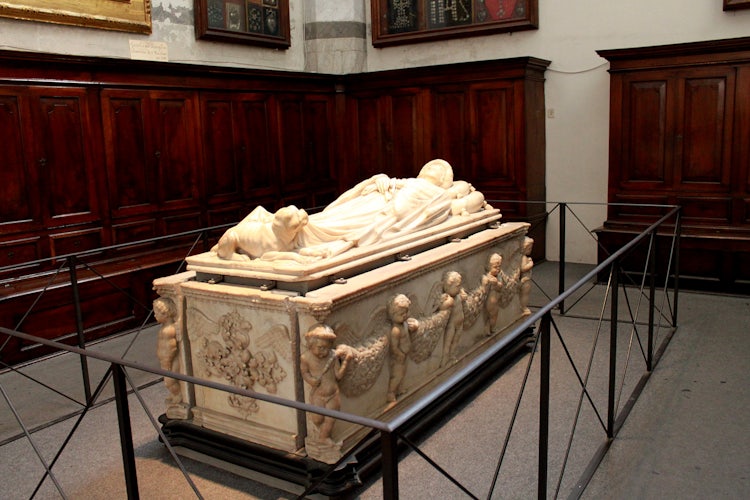 Besides the work of several Italian artists’ inside, mainly from the Renaissance period, such as Tintoretto and Fra Bartolomeo, the Cathedral is renowned for being home to three great masterpieces, the first of which is Ilaria del Carretto’s tomb, realized by Jacopo della Quercia in commemoration of Paolo Guinigi’s wife (an influential Lucca politician, whose family contributed to the construction of the famous Torre Guinigi, the one with the tree on top). She died very young as a consequence of childbirth.

The others are the Madonna and Child Enthroned with Saints, by Ghirlandaio and, of course, the wooden crucifix of the Holy Face, housed in the temple of the Holy Face, realized at a later era by Matteo Cividali. In addition to those above, you will find Federico Zuccari's Adoration of the Magi, Jacopo Tintoretto's Last Supper, and finally Fra Bartolomeo's Madonna and Child (1509).

The marble inlay floor with a mix of geometric and religious themes is reminiscent of the floor in Siena and to a certain extent even in San Miniato al Monte in Florence.  The designs originate in 1233 and you note that there is a knight on a horse, just like that which is on the facade.  The San Martino was infact a knight in armour which explains this repeating image. (The origianl statue from the facade is found inside the church).  Lastly have a look up towards the ceiling to admire the colors and images that hang above like a briliant blue sky. 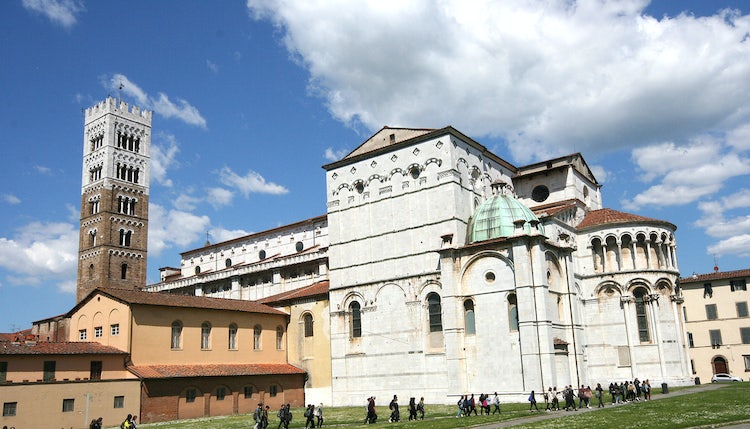