The Holy Cross Celebration in Lucca 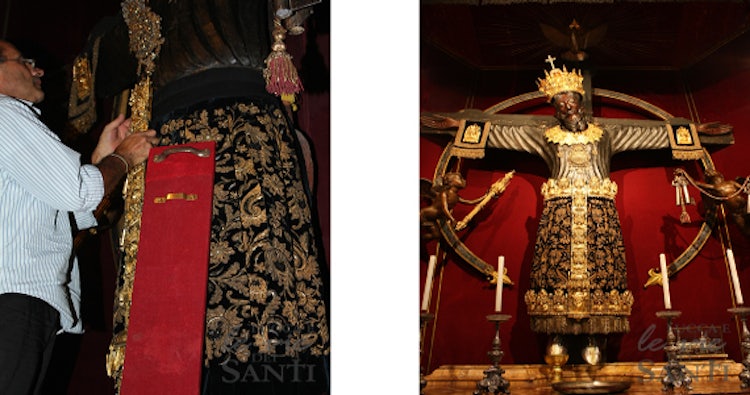 One of Lucca's most important annual events is connected to this antique reliquary, the Holy Face. Very important for both Lucca's residents and visitors, the Holy Face is the historic protagonist of the Holy Cross celebrations which take place on the 13th of September every year in Lucca. This important wooden crucifix is located in Lucca's cathedral dedicated to San Martino.

The ritual consists of a procession that leaves from the Basilica of San Frediano, runs through the town to the Cathedral to pay homage to the Holy Wooden Cross. Characteristic and essential element is the luminara: all participants bring a candle or lamp and create a parade of lights, while all the buildings along the procession route are illuminated or decorated with tiny glasses containing candles.
I can assure you that the effect is truly spectacular!

What is the Holy Face?

According to medieval legend, Nicodemus, a figure often refered to as a Pharisee and is rumoured have met with Christ, carved from memory the face of Jesus. However, he hesitated to complete his carving for fear of not doing it justice. Exhausted from the work, he fell asleep.  When he awoke, he found the face was finished and claimed it to be the work of an angel. The story then tells us that the Crucifix of the "Holy Face" was buried in a cave for safekeeping, where it remained for centuries. So you may be wondering if it was buried in a cave then how did it get to Lucca?

It was rediscovered by Bishop Gualfredo, who was on a pilgrimage to the Holy Land when its location was revealed to him in a dream. To allow God to decide where the Crucifix should be kept, the bishop set it adrift on an unmanned boat in the Mediterranean Sea. The Volto Santo arrived on the shores of northern Italy, where the Bishop of Lucca, also prompted by a dream, put it into a wagon with no driver to determine its final location. The two oxen pulling the wagon stopped of their own accord at Lucca in 782.

The story doesn't stop there, it is also said that the Volto Santo was placed in the Church of San Frediano, but the next morning, it was found to was miraculously in another church, that of San Martino. Therefore, San Martino was designated the cathedral of Lucca and the wooden statue was left in a special chapel within the church. 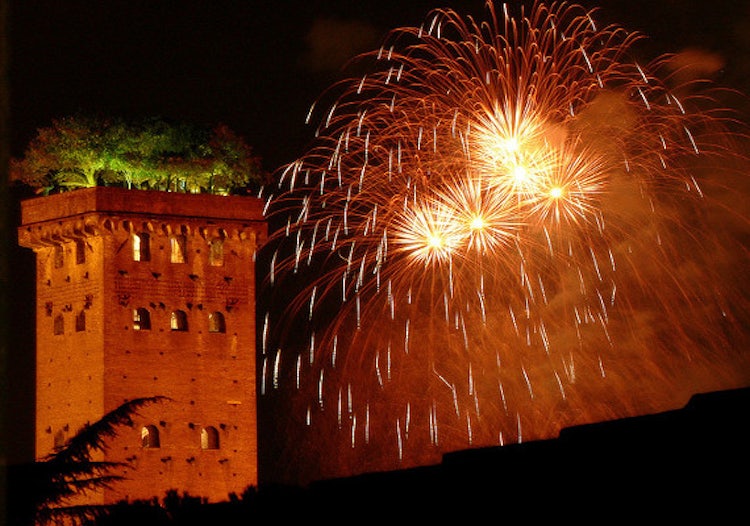 For several years now, the Holy Cross event is part of a much larger event that takes place in several locations across the city throughout the entire month of September (thus becoming the famous Settembre Lucchese). Markets and exhibitions of local handicrafts and products, traditional agricultural fairs and, above all, an amusement park! Everyone living in Lucca or nearby, child or grown-up alike, knows and has been at least once to this wonderful park!

This means a whole month of celebrations, many rides on the carousel and eating many frati! Besides the buccellato, a sweet raisin bread, Lucca is also famous for its delicious frati which are sugar covered fried doughnuts (which are different that the ones stuffed with chocolate or cream). Ask a resident where you may taste the best frati in Lucca and he will show you his favourite place: everyone, in fact, seems to have their own special frataio, but be assured whichever one you try, you will not be disappointed!

I highly suggest avoiding using a car to get to Lucca on special occasions such as this: the Holy Cross celebrations attract people from everywhere so it will be crowded. I strongly suggest you get there by train, as the rail station is close to the city center and you may easily walk under and through the walls to reach the center. If you have a car, parking lots are outside of the center and might end up parked further than walking distance to the center but in the case, you might rent a bike for your visit to the town to ease your moving about.