The Santa Maria della Scala Museum complex is highly recommended for all ages and interests; the vast collection within covers a wide range of periods, functions and architectural intrigues. The primary points of interests include the labyrinth of the hallways and levels, the colorful frescoes, the archive of archaeological finds and the sparkling treasure in the hall of relics.

Two of the more intriguing displays include the story about the origins of Siena and the restoration of the Fonte Gaia, both have multi-language panels and digital films that animate the information being provided. 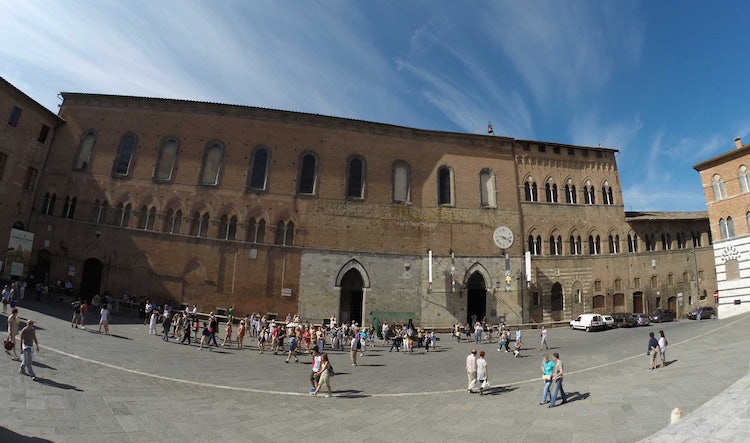 A Bit of Background on the Museum

So, why was this structure transformed into a museum?

The Complex of Santa Maria della Scala is one of the oldest "hospitals" in Europe. Established along the via Francigena, it sits right in front of Siena's majestic Duomo and was thus the perfect site for welcoming travelers going along the pilgrimage route to Rome.

Santa Maria della Scala was one of the first European examples of a place completely dedicated to offering lodging and shelter to pilgrims, as well as offering support to the poor and a home to abandoned children - so it was hospital in the sense of hospitality!

Santa Maria della Scala also played an important role in the cultural scene of Siena. Many important artists worked here, such as Simone Martini, who frescoed the big cycle of the Stories of the Virgin (lost through time), Ambrogio and Pietro Lorenzetti and later Sebastiano Conca. 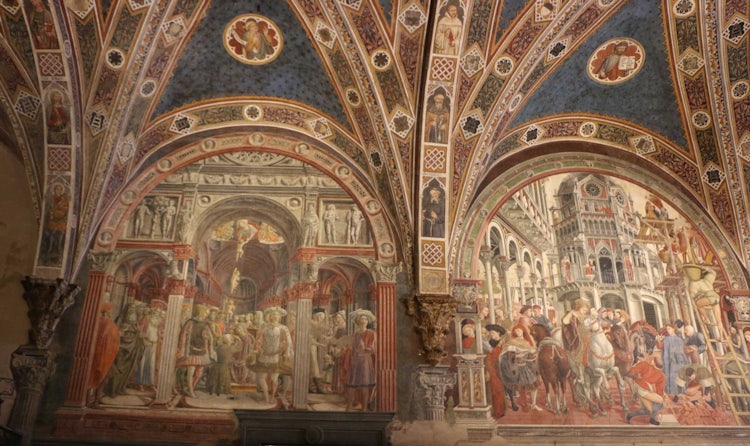 How to Navigate the Museum

Today, the complex of Santa Maria della Scala is one of the most important museums in Siena with over 10,000 square meters of space. The whole complex actually hosts several museums and splendid monumental areas. The museum is spread out and situated on several levels, with many connecting hallways that will make your head spin trying to navigate through them all.

Since the complex was built on the side of a hill it actually has "hidden" levels that can only be seen externally if you are on the side that slopes into a valley on the outside of the city. But the side that almost everyone sees appears street level with the Piazza Duomo. 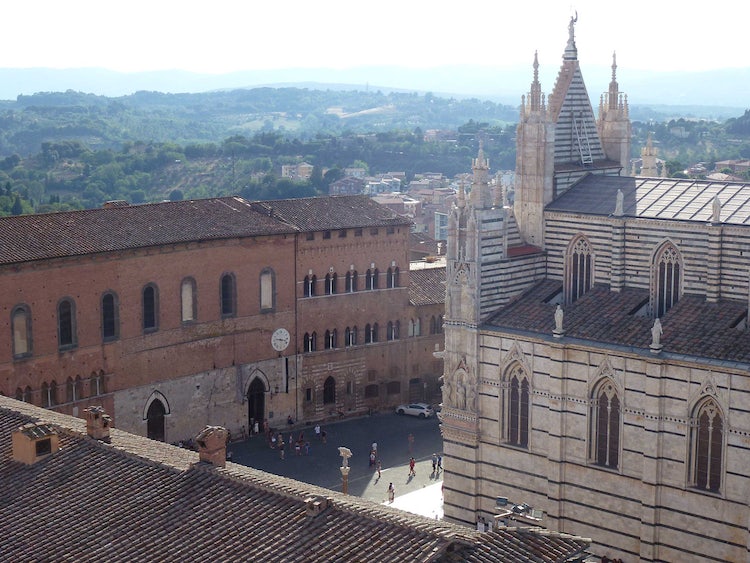 Entering into the Museum

The building is so large that they are constantly renovating and opening new areas for the public to visit.

Particularly appreciated is the engaging use of digitally created videos throughout the museum, each is a captivating, modern teaching tool which speaks to all ages without the need of a translator.

During our visit in February 2018, the layout had changed considerably since our last visit to the museum. Here are some updates incorporated into an itinerary of what there is to visit within the complex.

The ticket office is in the corner (stand with your back to the Duomo and you will see it on the left hand side). Within this area you have access to a coffee bar with a selection of "panini" and pastries, a bathroom and storage area and the gift and book shop. The new ticket area, gift shop, coffee bar and temporary exhibition hall are in the Women’s Pilgrim Hall, be sure not to miss the frescoed walls while you're in this area. Without having entered, you can already glimpse what lies further within.

The main entrance to the museum is in the back of the hall.

The first section of the museum is jammed packed with things to see, starting with:

The heart of the complex, and that which definitely catches the eye for its well preserved and colorfully painted walls, is the "Pilgrims' Hall, a cavernous, long hall designed to house all those turning to the hospital for help". Built in 1328, it was the first hospital ward. Follow the frescoes on the wall with the audio guide and see how they capture the various functions of the hall and the hospital.

Superb cycle of frescoes on its ceiling and walls, painted from 1439 to 1440 and 1441 to 1446 ... While the figures of saints, prophets and Old Testament figures in the vaults were painted by Agostino di Marsiglio, a painter from Bologna, the side aisles were assigned to major 15th century Sienese artists of the calibre of Lorenzo di Pietro, Domenico di Bartolo and Priamo della Quercia. 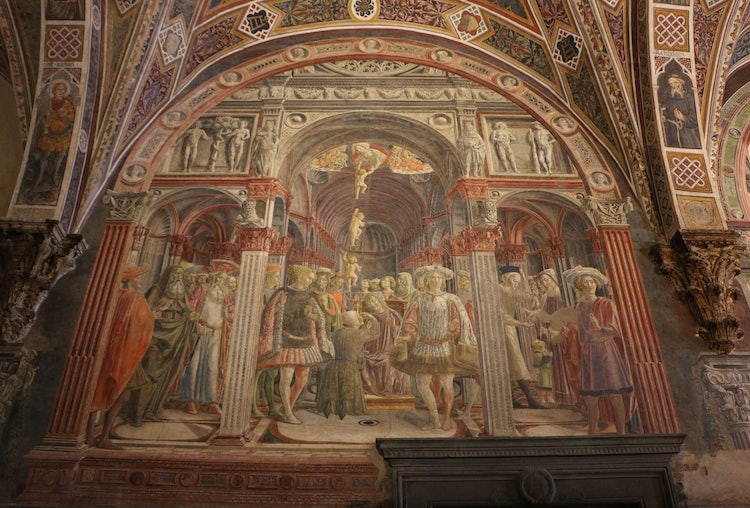 Between the old sacristy and the Pilgrims hall, stop to watch the digital recreation of the passing of the years and the growth of Santa Maria della Scala; it is almost impossible to conceive that it started as a small wooden hut and grew to the massive multilevel complex you are about to explore.

All that Glitters & the Treasure of Santa Maria

As you move out of the Pilgrim Hall, you can admire a "small portion" of the relics which were bought to bolster the flagging spiritual community in Siena in the year 1359. The dim room focuses the light on the elaborate "containers" that hold the precious remnants inside. Silver, gold, precious stones and quality craftsmanship; it is hard to decide if the "real treasure" are the relics or the individual treasure chest for each piece.

The legend of the origin of the relics tells us that Saint Helena (ca. 300AD), the mother of Constantine, amassed the first pieces of this collection in her search for the True Cross. It was then enlarged by other Byzantine emperors who added their findings over the years. In addition to the reliquaries, there is a monumental Gospel, a book that contains the lessons of the gospels. 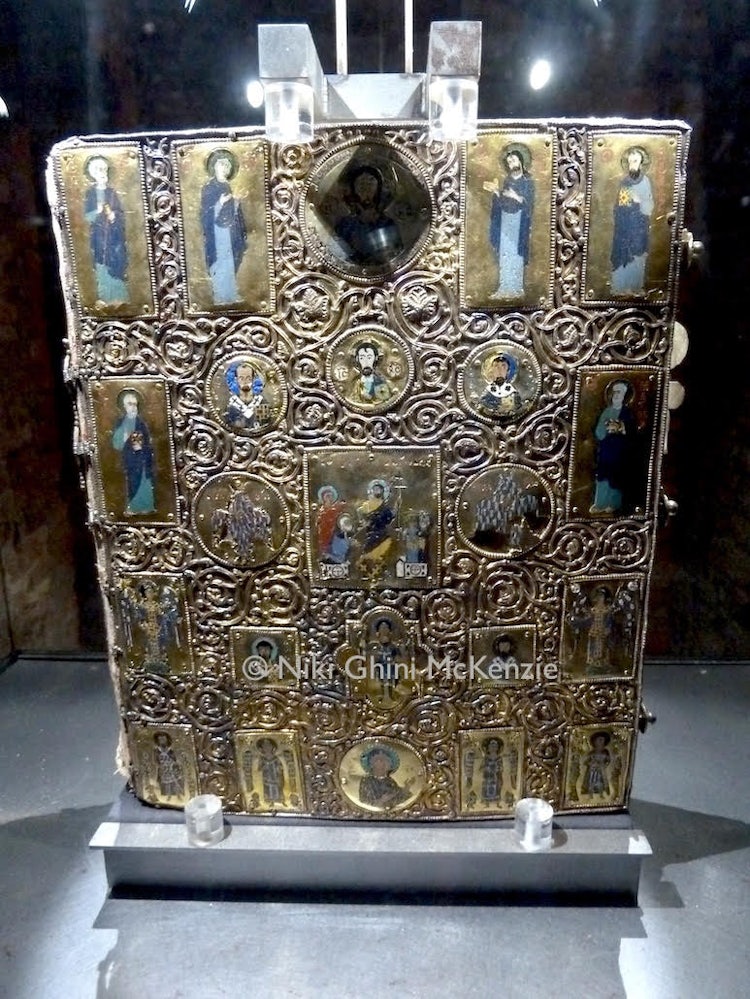 Near this area you will find several rooms which were probably linked to the storage and preservation of food and dishes, indicated by the presence of "niches" found during recent works of restoration. Today, it serves as a type of time machine. Watch the videos projected within the niches; the film uses images from special moments in the past which seem to come “alive” with a little bit of magic.

On the 3rd level is the Corticella, a small cistern courtyard and a junction that marked the end of the covered road used to bring people and supplies into the hospital. Here you can adventure into the many tunnels that will take you to the medieval hayloft and a cavern filled with bones!

Down one of the corridors, you will find a large room housing the original marble statues from the Fountain Gaia (Joy) by Jacopo della Quercia.

Did you know that what you see in Piazza del Campo is a copy? Take a few minutes to watch the digital story of the creation of the fountain, which is one of the iconic symbols of this amazing city.

This level plays host to the Oratory of the Company of Saint Catherine of the Night and the historical headquarters of the Society of Executors of Pious Dispositions. 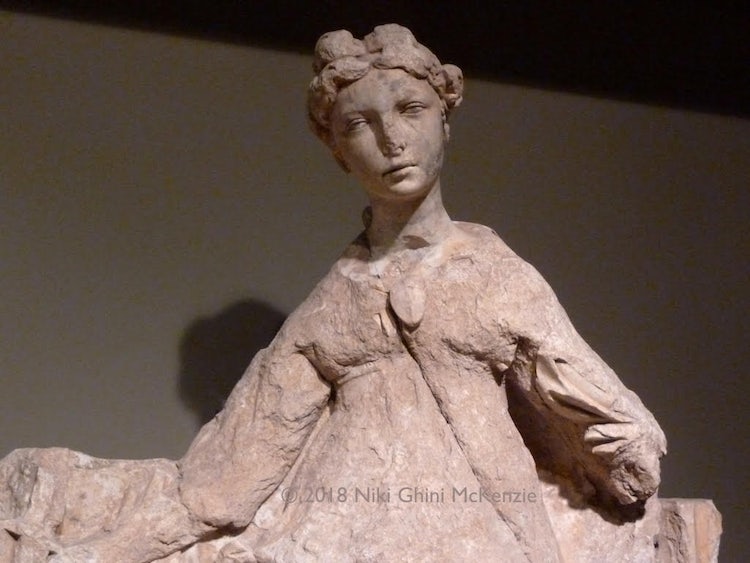 If These Walls Could Talk

Passing to the next level, which in this case is the first - meaning one of the first in the original area - you will enter into one of the most suggestive areas in the entire complex.

Free with your Ticket

Included with the entrance is an audio guide in several languages connected to a bluetooth system, prompting you to listen at the appropriate areas. HINT: It will prompt you to listen, but you actually have a choice of listening to information or tranquil background music, which acts as a buffer between you and other guests, giving you mental space to admire the art around you.

This level is full of impressive tuff-stone tunnels that host an expansive collection of artifacts telling the story of Siena long before it was the tower town with the shell-shaped square that you find today outside of walls of the museum.

For those who are beginning to feel a bit unsure of the road to follow, since there appears to be very few reference points, there is a junction point before the last two sections of the complex, where you will find an information desk and they will help you find your way (no breadcrumbs necessary).

A select part of the tunnels hosts the exhibition, "Siena: Tale of the City from its origins to the Middle Ages", pointing out significant places and times in the history of the hospital. 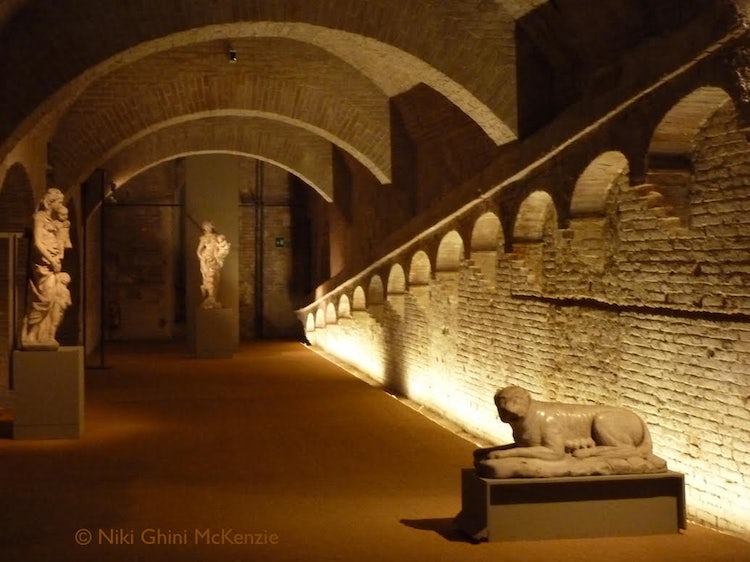 The last piece to visit is the archaeological museum highlighting Etruscan and Roman finds throughout the territory. The staging of this area of the museum is a mix of the neutral colors, natural stone and a modest unfinished wood floor combined with dim lighting and large glass display cases which appear to give it a "spooky" atmosphere to the artifacts coveted within.

From within these tunnels you will occasionally have a glimpse of the “inner” road, a hidden road that was once open to the surrounding landscape. If you can’t imagine what that might have looked like, then you will appreciate the projected images of life from yesteryear: the coming and goings of monks, young children and farmers. 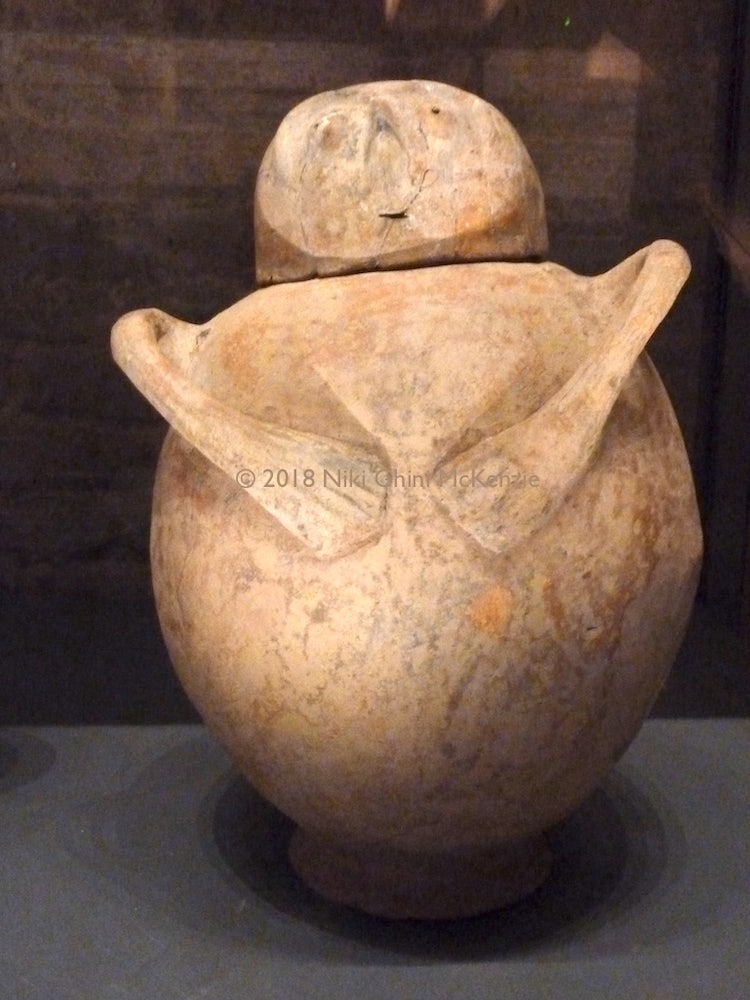 A City within a City

The complexity of Santa Maria della Scala is just part of its charm, and the various tunnels, niches and internal roads and rooms seem to create "a city within the city". As you prepare to include a visit to this museum in your itinerary, be aware that you can easily spend several hours exploring all of the rooms and the displays.

You may even lose sense of time as you venture deeper into the internal maze of tunnels where there are no windows. However, with its many works of art and creative explanations highlighting the passage of time/years, this should be considered one of the highlights of Siena.

Just more reason to give Siena at least a whole day of your time while in Tuscany! 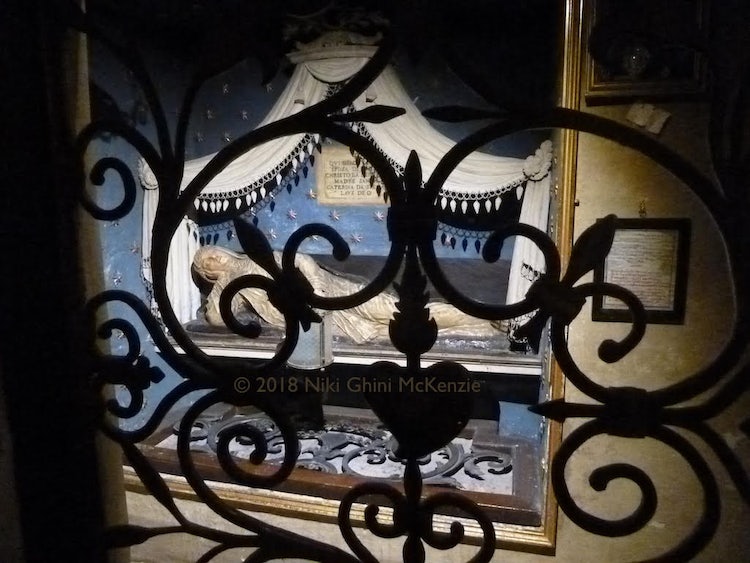 P.zza Duomo 1, right in front of the Duomo