Exploring Piombino on the Tuscan coast

A Naval base, port, & lots of beaches

Piombino is located in the final stretch of the Etruscan Coast, which ideally begins at the height of Livorno, a hundred kilometers further north.

In the early 1800s, Napoleon Bonaparte assigned Piombino to his sister Elisa Bonaparte Baciocchi, who became regent of the Principality of Lucca and Piombino. The Princess of Piombino used to call the city "my little Paris" and during her reign the town had a period of great splendor.

Built over the sea, Piombino has always been a naval base. Today, the city’s port is used for freight transport, but also as marina.

From the port of Piombino you can catch one of the many ferries that go direct to the islands of the Tuscan Archipelago (Elba Island is just 10km from the coast!), as well as those to Sardinia and Corsica. 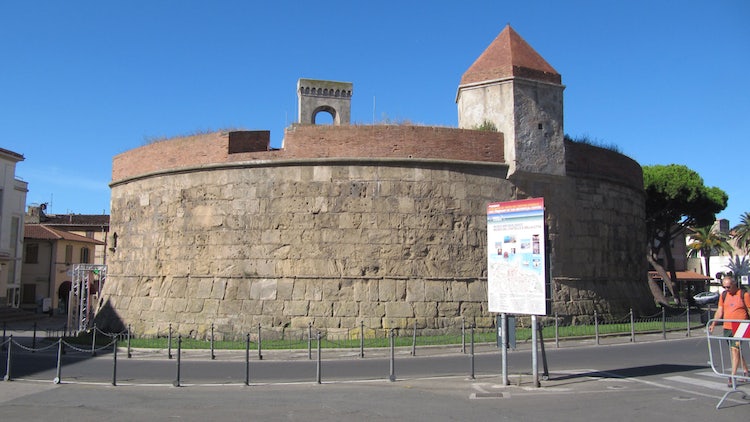 Much more than just a marina

Piombino is indeed an important reference as a port, but it would be a shame to know it only for this aspect.

I also made this error for many years until I had the chance to visit the old town of Piombino which in the end really surprised me!

Piombino’s historical center is tiny and easy to visit on foot.

If you arrive by car, you can park just outside the historical center, from example, close to the Torrione, the ancient gateway to the city (as we did on our visit).

The gate of St. Antonino, as the Torrione is also called, dates back to 1200 and is the oldest monument of Piombino. The adjoining Rivellino, a massive semicircular reinforcement was instead added in the XV century.

At first glance, the Torrione and Rivellino put together are original, its particular shape can be easily explained taking a step back in time. The Rivellino was not decorative but had a military purpose, in fact, it was built to protect the city (at that time ruled by the Orsini family) against possible enemy attacks. 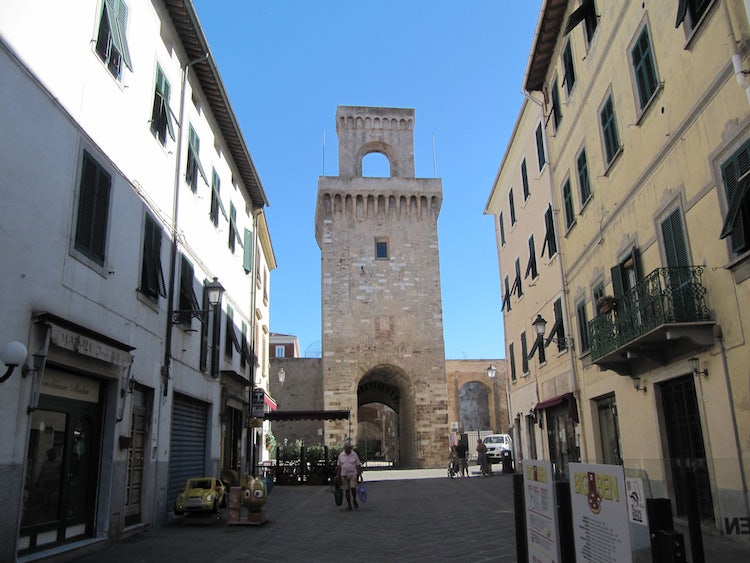 After crossing the Torrione, we enter in the elegant Corso Vittorio Emanuele. Here, if you're looking for a place where to eat, you can find several good restaurants and taverns.

Some locals gave us a couple of suggestions about where to eat (and I definitely love locals tips): Taverna dei Boncompagni and Osteria Volturno. We chose the Osteria Volturno and had a really great "frittura di pesce" (fried fish).

Continuing our walk through the city, do not miss visiting the Palazzo Comunale (Town Hall) and the adjacent Torre dell'Orologio (Clock Tower). Graceful and impressive, the buildings were restored in '900. On the first floor of Town Hall is the tourist information office, where you can find some useful brochures (there are a lot of interesting free guides on the Etruscan Coast, look for them here!).

Piazza Bovio: a beautiful terrace with a view over Elba 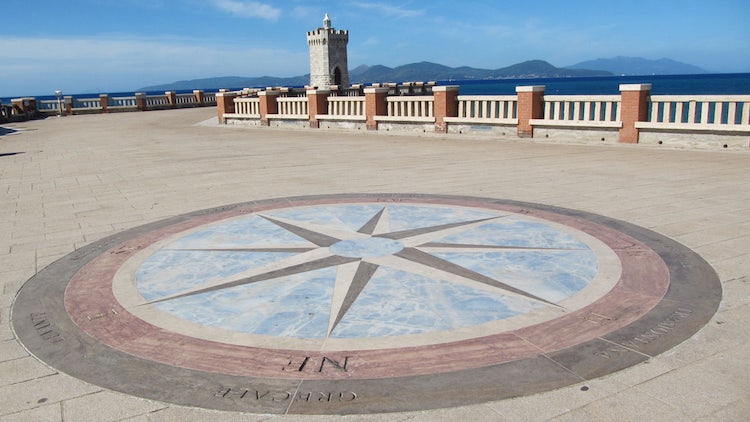 Looking behind the Town Hall, you can discern the sea and just beyond one of the most beautiful panoramic viewpoints of the city: the terrace of Piazza Bovio.

Built on a picturesque sea cliff, Piazza Bovio has a wide balcony with a stunning view over Elba island. In clear days from the terrace you can even see the islands of Montecristo, Giglio, Capraia and Corsica. On the right, you can see the promontory of Falcone. I would recommend visiting Piombino just for this view, but once you're here, obviously there is more to see.

Just beyond, you can see the old harbor, still used by fishermen to moor their small boats, as well as the Fonte dei Canali fountains with its snake's heads made by Nicola Pisano (sculpted several years before devoting himself to great artworks such as the decoration of the Cathedral of Siena and the wonderful pulpit of the Baptistery of Pisa).

The castle and the Medici fortress

The castle is located on the opposite side of Piazza Bovio. To reach it, you can climb up the road overlooking the sea (called viale del Popolo). This path is slightly uphill, but offers really special panoramic views.

The castle dates back in the 13th century, while the fortress was added in the mid-1500s by Cosimo de' Medici. The whole complex had several transformations over the centuries, even structural changes.

After the 1861 (the year of Italian unification), the castle and the fortress were used as a prison.

A long restoration, which ended in 2001, permitted the recovery of the original 16th century building.

Today, the castel is the setting for the Museum of the Castle and the City.  The museum is quite small but interesting. Upon request, it is possible to visit it as part of a guided tour (not sure in English but ask!) and is probably the best way to see it. We visited the museum on our own, but I had the impression that we were not able to fully grasp the complex history of the building and of the town of Piombino.

For more information and opening times of the museum, visit www.parchivaldicornia.it. 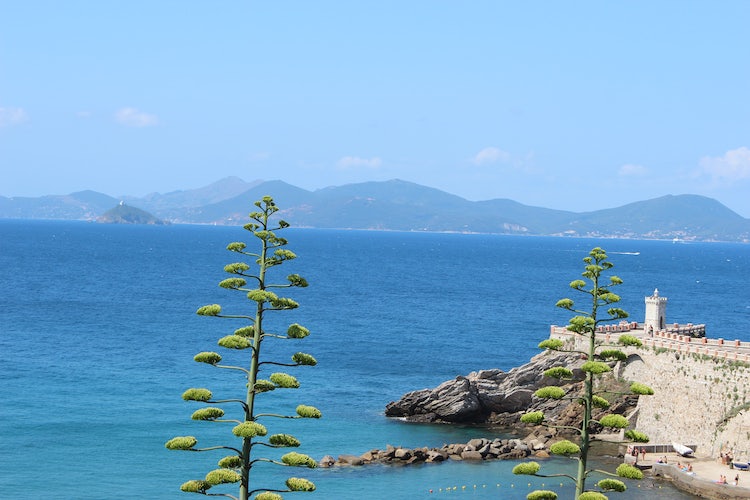 How to get to Piombino

Arriving from the North by car, you can take the Autostrada A12 Genova-Livorno and exit in Rosignano Marittima. Drive along the SS1 Aurelia and follow the road signs to Piombino.

Arriving from the South by car, you can instead take the SS1 Aurelia towards Grosseto, then continue in the direction of Venturina - Piombino - Elba Island, following road signs to Piombino.

Piombino offers two railway stations: Piombino Centrale and Piombino Marittima (it ends in front of the port). So you can easily get here by train.

The city's marina links the mainland with the islands of the Tuscan Archipelago as well as the islands of Sardinia and Corsica. The two main ferry companies are Toremar (www.toremar.it) and Moby Lines (www.mobylines.it)

Enjoy exploring this off-the-beaten-track destination in Tuscany - and let us know what you think! 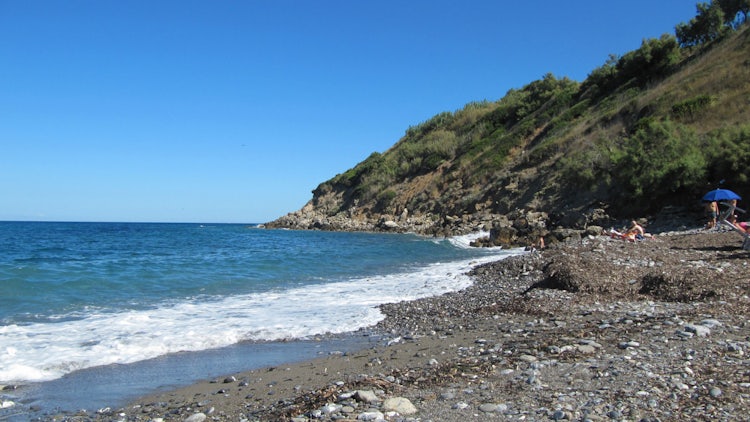 Discover the best beaches in the Val di Cornia,...

Discover Bolgheri, a tiny but precious medieval hamlet close to...

A rather hidden jewel in Tuscany for most foreign visitors, the...

Castagneto Carducci: What to see and other...

Climb up the medieval hamlet to its peak to...

In the village of La Sassa, this restaurant...