San Quirico: A Town to Explore

In the Heart of the Val d'Orcia

When we decided to go discover this beautiful area of southern Tuscany, we looked on a map and decided on a central place from which to visit Pienza, Montalcino and Montepulciano... and San Quirico seemed to be right smack in the middle! We weren't wrong in our choice either since it really is in the center of the area, making it an ideal base from which to head out every day in a different direction.

We stayed right in front of the Collegiata, San Quirico's cathedral, at the B&B Casa Lemmi. A great welcome, an independent entrance to our very modern and spacious room, great buffet breakfast and gorgeous spa area... but I digress! Its location is perfect, since San Quirico itself is small we were just minutes from several restaurants based on the main street in the village. 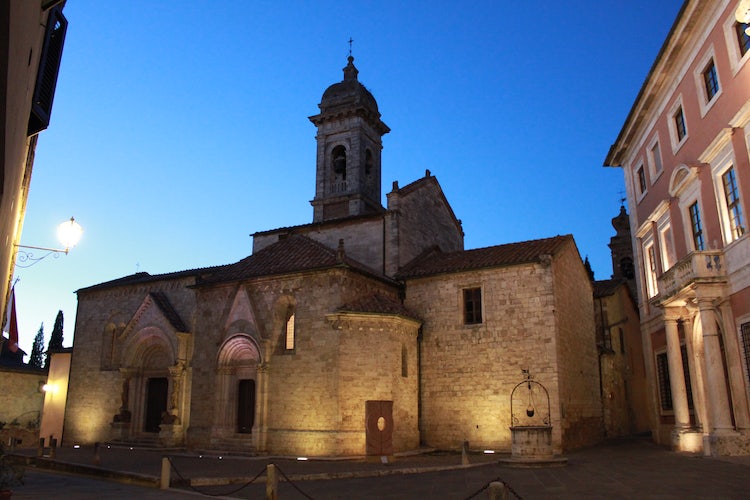 The Beauty of the Landscape

The beautiful town of San Quirico d'Orcia sits atop a hilltop (what else?) halfway between Pienza and Montalcino. Right before you arrive into San Quirico, look to the right of the road right after passing a long bridge... recognize that crop of cypress trees on the side of the hill? Yep, that crop constitutes the most photographed trees in all of Tuscany! Depending on the season, they might not look picture perfect and they weren't when we were in the area (October meant everything was quite brown) but if you're here in spring or early summer, we are sure they will be picture perfect for you! 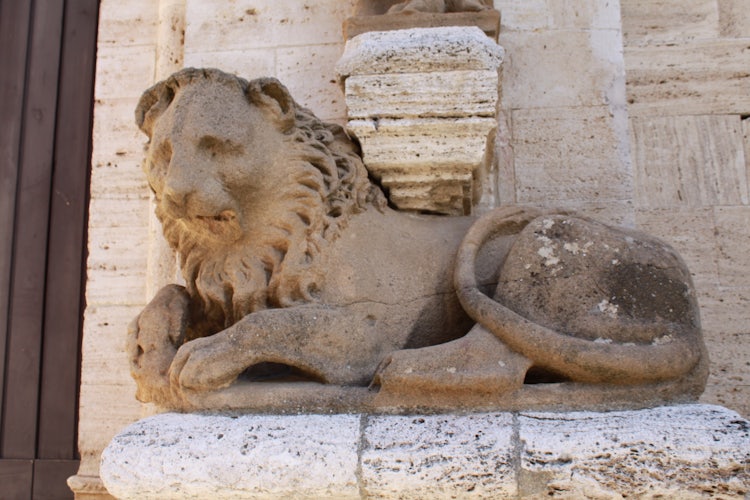 WHO WAS SAN QUIRICO?

He was a young Christian child, he and his mother Giulitta were put to death by the Emperor Diocleziano in the year 304 and thus became martys. The interior of the church is adorned with beautiful paintings and impressive carved wooden panels.

We quickly learned that San Quirico was a very important stop in ancient times since it sat right along one of the pilgrimage routes, the Via Francigena, that connected northern Europe to Rome in medieval times. The town is divided in half by the main street, Via Dante Alighieri, with most of its fortified walls still standing.

There is ample parking outside of the town right around these walls. You'll enter the town through one of four entrances along the wall. We recommend you start from the northwest entrance so that you can enjoy the view of the front of the Collegiata of the Saints Quirico and Giulitta, a beautiful Romanesque church with Gothic and Baroque additions. The stone is pretty weathered and marked with holes; the doorways are beautiful, we recommend you go up and study the sculptures all around and noticy that each of the lions guarding the various entrances are in different poses. 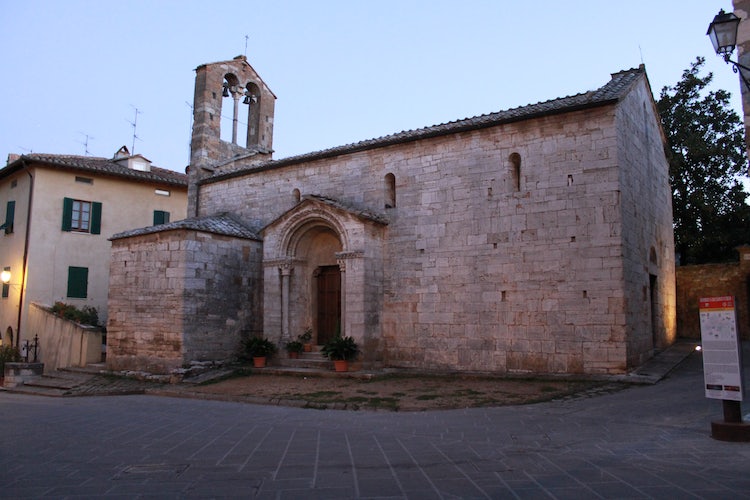 Behind to the side of the Collegiata, you can then admire the Palazzo Chigi, the beautiful palazzo now home to the city council. Continue along Via Dante Aligheri, you'll arrive at Piazza della Libertà, heart of the small town with the Church of San Francesco. The church is also called the Church of the Madonna since it now protects the terracotta statue of the Madonna by Andrea della Robbia that used to be in the nearby, very famous, Vitaleta Chapel.

If you stay on this main road, you'll find several restaurants where you can enjoy lovely lunches and dinners. As you near the opposite end of San Quirico, you'll find another lovely Romanesque church with its side to the street: the Church of Santa Maria Assunta. The church is very simple but full of atmosphere; its portal is beautifully adorned by little carvings of animals, very similar to the ones on the facade of the Sant'Antimo Abbey in Montalcino. 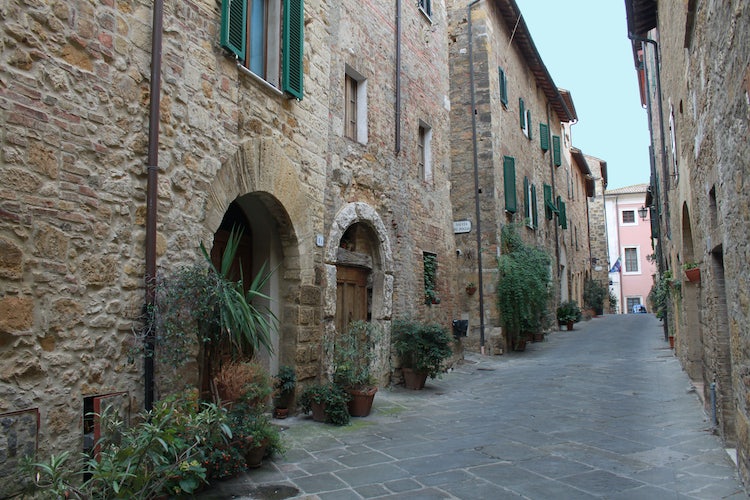 Head back to Piazza della Libertà: from here you can enter into the splendid Horti Leonini gardens, a gorgeous geometrical example of giardini all'italiana from the Renaissance. Another entrance into the gardens can be found right behind the Santa Maria Assunta church, too. Designed around 1540 by Diomede Leoni, the gardens display a statue of Cosimo III dè Medici at its center. Further in, you'll find the remains of the Torre del Cassero, an ancient medieval tower that used to rise over 39 meters but unfortunately destroyed by the Germans during the Second World War.

Head Outside the City Walls

From the fortified walls surrounding the gardens, you enjoy vast and breathtaking views all over the Valdorcia, from the volcanic Monte Amiata to the beautiful hilltop towns of Pienza and Montalcino. If you follow the smaller streets from Via Alighieri, you'll also find the Cappuccini door along the walls, an austere bulwark. 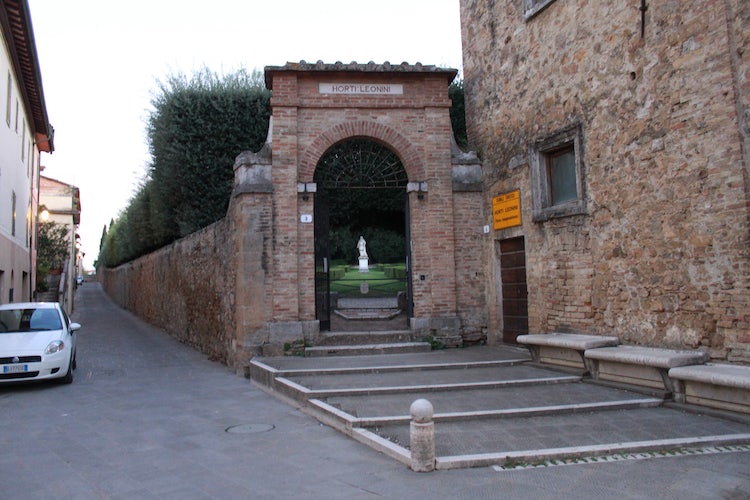 As you leave San Quirico toward Pienza, admire the surrounding countryside. This is what the majority of postcards portray Tuscany: rolling hills, solitary lines of cypresses, and one of the most beautiful and photographed chapel in Tuscany, the Cappella of Vitaleta. The chapel is one of the main icons for the Val d'Orcia, likely because you don't expect it right in the middle of the hill.

The landscape around San Quirico is extremely enchanting: everywhere you look, endless golden wheat fields, undulating hills running one after the other, avenues of cypress trees along curvy country roads, and isolated rural homes and farms here and there. We walked to Pienza from San Quirico and it was a beautiful way to immerse ourselves in this land.

San Quirico was the perfect base for visiting the entire area - you can book your accommodation in San Quirico or Valdorcia here - but we highly recommend stopping here even if you're just passing through Val d'Orcia on a day trip. 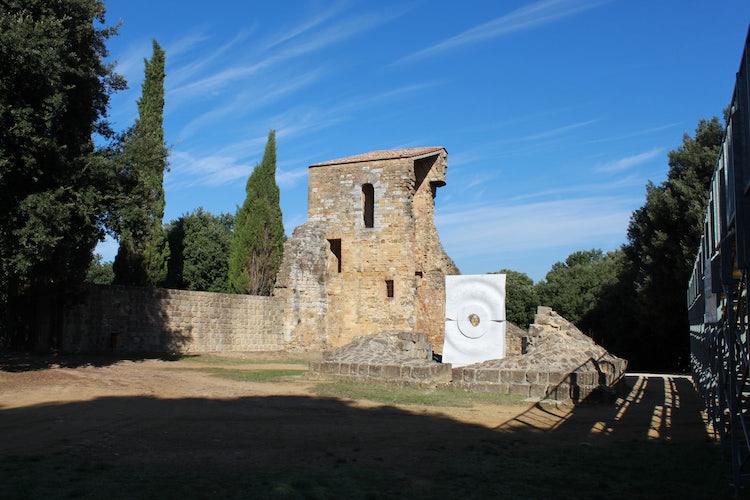 Read our itinerary and guide of Pienza in Tuscany. Pienza...

In Pienza, we recommend visiting the beautiful...