Plan your visit to Pienza

The Perfect Mix of Architecture, Food & Tradition built to represent a "Utopian City"

Pienza is a tiny village in southern Tuscany in the beautiful valley called Val d'Orcia we highly recommend you visit. The village is located about 20 kilometers east of Montalcino and a few kilometers to the west of Montepulciano amidst gentle undulating hills and wonderful natural landscapes. Pienza enjoys a strategic position standing high atop a hill, dominating all the Orcia Valley with extraordinary views.

This charming village is widely known as the "ideal city of the Renaissance", the creation of the great humanist Enea Silvio Piccolomini who later became Pope Pius II. Piccolomini had the money and influence to transform his birthplace village, the humble Corsignano, into what he considered the Utopian city should be, exemplifying the principles and philosophy of classical times and of the great Italian Renaissance. Thus, Pienza became the realization of a dream!

The project was designed by the architect Bernardo "il Rossellino" under the guidance of the great humanist Leon Battista Alberti. In only 3 years, a group of amazing and harmonious buildings were completed: the Cathedral, the Papal or Piccolomini Palace, the Town Hall, and the lovely central square onto which all of these buildings look upon. 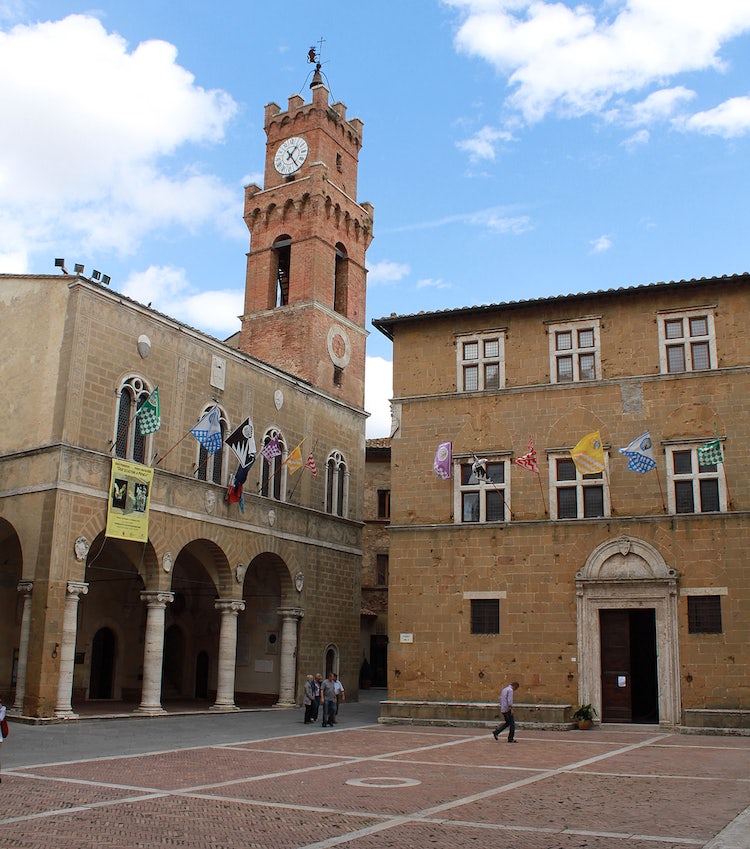 Piazza Pio II has a perfect harmonious shape which gives great dignity and solemnity to all of the surrounding buildings built in bright travertine stone. On one side of the square, you can admire a beautiful well, known as the "well of the dogs".

The Duomo or Cattedrale dell'Assunta hosts very fine paintings by the most renowned artists of the period, while the octagonal bell tower standing over the ancient crypt with the same octagonal shape points to the sky. Both dominate the landscape as you view Pienza from afar.  As you walk through the church you will notice the uneven floors, the unsettling cracks making their way across the pavement and little glass plates (like lab slides) glued to the walls.  The architects didn't calculate the effect of the weight of the cathedral and its impact on the foundation of the church and now the hillside that it is built on is starting to "give way".  The little glass plates are a way of controlling the shifting of the earth and the structure....everything is fine....until one of them cracks! 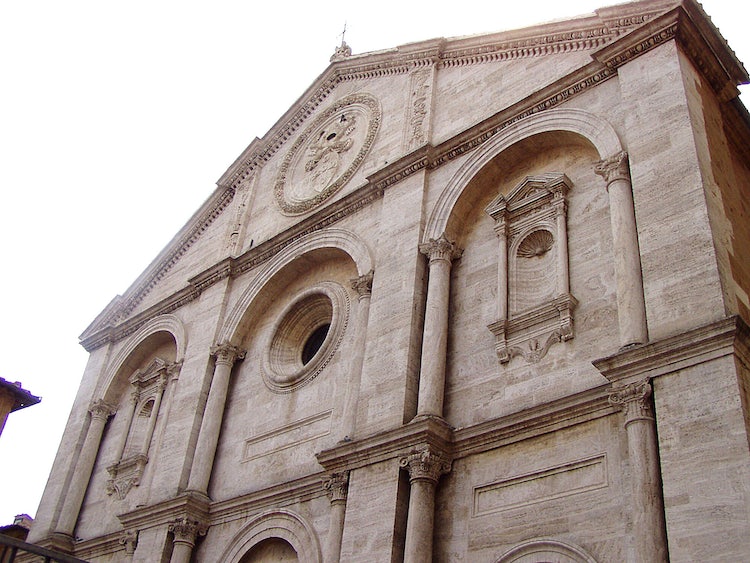 The imposing Palazzo Piccolomini to the right of the Duomo has a fantastic Loggia with a delightful hanging garden from which you can enjoy unique and breathtaking panoramas of the Val d'Orcia Valley, from Montalcino to the Mount Amiata. Palazzo Piccolomini was even used by Franco Zeffirelli for filming some scenes of his famous and romantic movie Romeo and Juliet, in which it represented the location of the first encounter between the two lovers at the Capulets' home.

The impression one gets, walking through the narrow streets of Pienza, is that of an extremely perfect and proportioned ensemble; somewhat as if you were admiring a Renaissance city depicted in a wonderful painting. 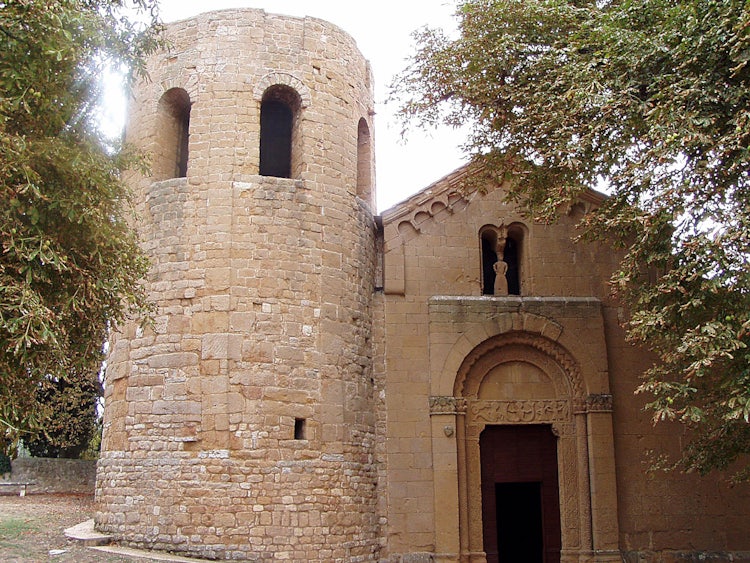 While you're in Pienza, follow the signs and take the short walk down the side of the hill Pienza is located on to arrive to the Pieve di Corsignano. The Romanesque church with three naves has its ancient origins in the 7th century but the present Romanesque style is from the 12th century. While the church is relatively empty, each nave has an altar and to right as you enter, you can see the original baptismal font where both Pope Pius II and his nephew Pope Pius III were baptized.

Head to the last column on the left and take a look at the column's capital: you'll find a carving of a regolo serpent! It is one of the few representations of the regolo serpent that has survived in its original form to our present day. A Roman deity, the regolo serpent was still known when the church was built in the 7th century and was not necessarily evil, even if Saint Gregory the Great defined him as the "king of the serpents". 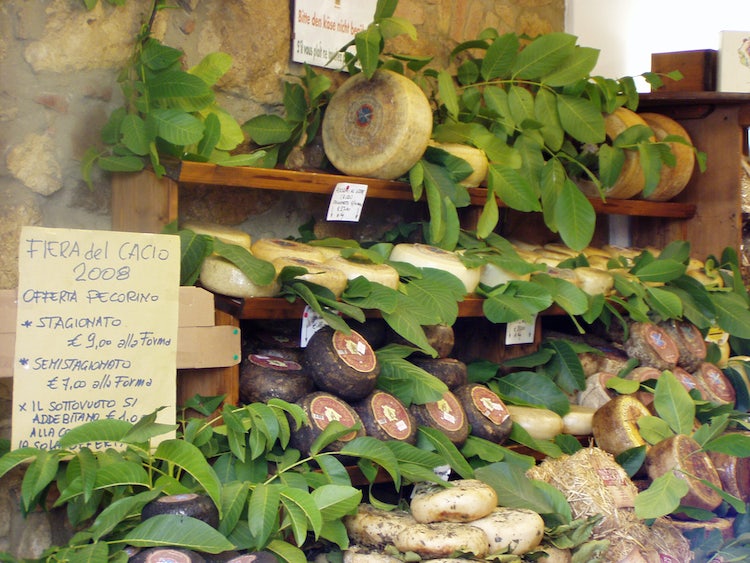 Pienza is also the city of cacio, which means cheese! The Pecorino of Pienza is a tasty cheese made from sheep's milk, renowned worldwide and delicious, which can go from a delicate flavor to a decisive one based on how aged it is.

The town streets are full of small charming shops selling a large quantity of various types of pecorino, from fresh to aged pecorico, that you can taste together with a number of other typical local products, such as fine wines, spices, pici (handmade pasta) and so on. We recommend stopping and tasting!  Best of both worlds is mixing the pici with the cheese in the famous dish: pici con cacio e pepe. 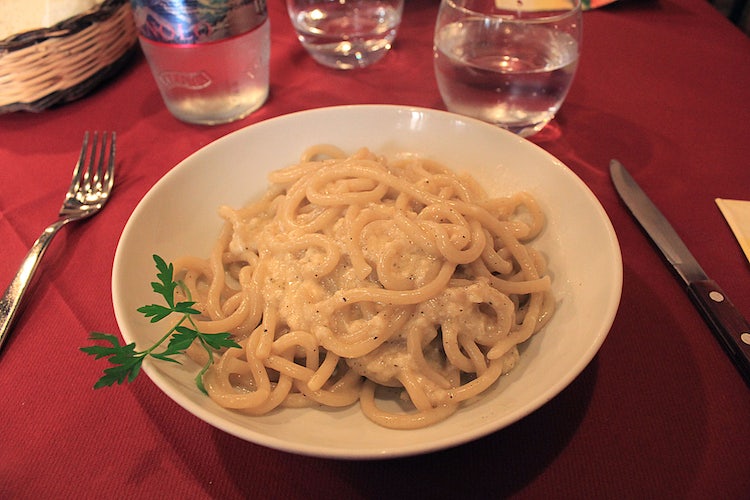 After a little bit of shopping, we suggest you try one of the fantastic restaurants or typical osterie serving really exquisite local food. One we've tried many times and highly recommend is the Osteria Baccus (located on the main street, Via del Casello): here you can taste savory dishes where the pecorino is prepared in countless original ways. Definitely try the Fondue of Mixed Sheep Cheeses, the Bruschetta della "sciorna", and the Pici with Cacio and Pepe. 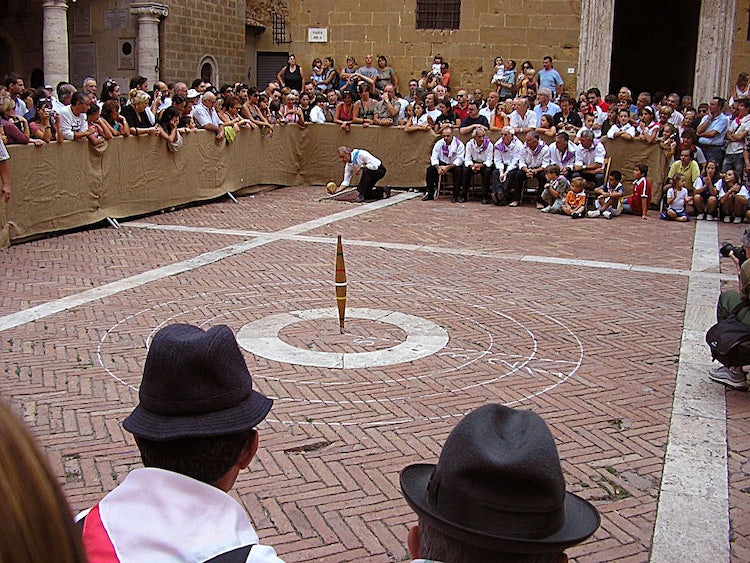 If you happen to come to Pienza in early September, don't miss the famous Fiera del Cacio, a great festival dedicated to pecorino cheese and other traditional products, which are offered all throughout the main weekend of the festival. During the festival, you can also enjoy a folkloric and amusing game of ancient origins called the Palio del Cacio Fuso. In this content, the players of each town district have to roll an entire round of pecorino cheese around the fuso, a wooden spindle located at the center of the square. It looks easier than it really is!

Pienza makes a great central base if you're planning on exploring the Val d'Orcia for a few days. Just a few miles to the west you have Montalcino and San Quirico d'Orcia, while to the east you have Montepulciano. You should also explore the small medieval village of  Monticchiello just to the south of Pienza, as well as Bagno Vignoni for its hot springs, Radicofani and its castle and then head a little north toward San Giovanni d'Asso for its truffles in the fall as well as to continue enjoying the magnificent views of the Val d'Orcia and Crete Senesi. Check out and book your accommodation in Pienza HERE. 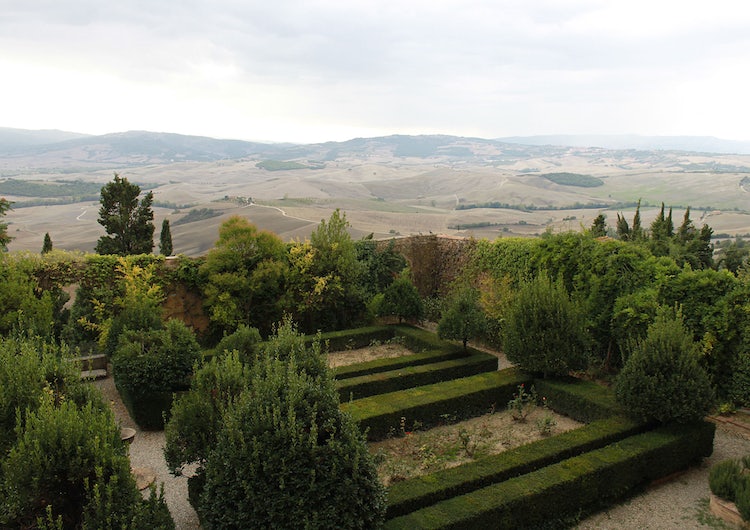 Sweet tastes and unforgettable perfumes will enchant you in Pienza, along with the great views of the Val d'Orcia all around the town. A real paradise for all food lovers and for anyone who wishes to be in a postcard from Tuscany!

Have a look at our photos of Pienza and Val d'Orcia! »

A walk through Montepulciano

Read our guide of Montepulciano in Tuscany....