In the beautiful, shiny crown that we know as Tuscany you'll find many precious jewels that catch the attention of the world. Florence, Pisa and Siena are some of the top names many recognize, as well as San Gimignano, Volterra and Lucca, to name just a few of the ones included in most travel itineraries to Tuscany. 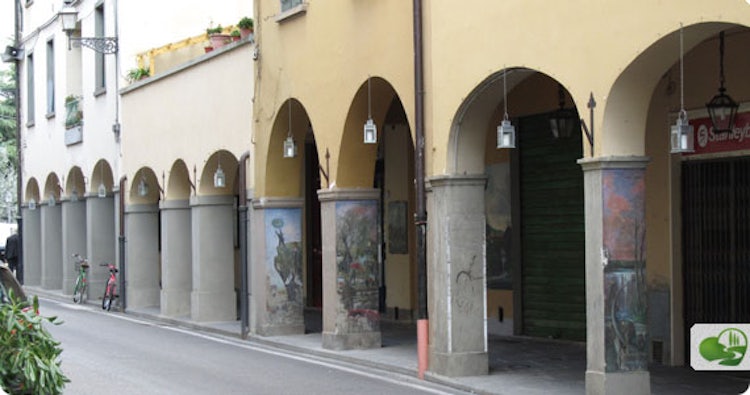 At the Crossroads of the Mugello and the Apennines

Located less than 40 km to the northeast of Florence, Dicomano sits on a flat area surrounded by a crown of green topped hills. Entry gate into the Mugello, the Casentino and Valdisieve valleys and touched by the waters of the Comano, Moscia and Sieve rivers from higher elevations.

Dicomano is listed in famous local historian Emanuele Repetti's 1835 "Dictionary of Physical and Historical Geography of Tuscany". The origin of the town's name, according to Repetti, is from the Latin "decumanum" since Romans used this name for "roads or tracks that marked from East to West the lands of the colonies".

The oldest existing document naming the town is a land contract from 1103 for the Episcopal curia in Florence. Yet the origins of this small town are more ancient. Its particular geographical location has definitely made it a top choice for human settlement from before Roman times so it is no wonder to find traces of both Etruscan and Roman settlements in the area.

Close to Dicomano is the archeological site of Frascole where significant Etruscan remains dating back to the 4th century B.C. have been found. The site is open to the public upon request. 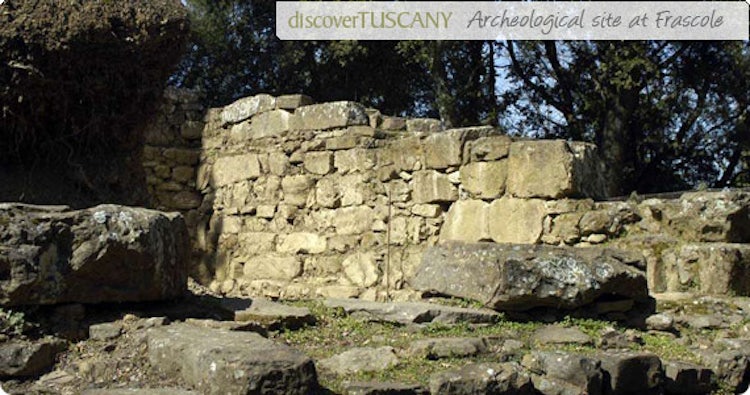 Then the Longobards arrived in the area, and their military background gave rise to the various branches of the powerful Count Guidi family in the area. The Guidi placed their fortresses right along the roads where merchants had to pass through, and it certainly was not to socialize!

The Counts of Guidi

Dicomano, located at the foot of the difficult road that goes up into the Apennines, was another important and necessary entry for the Florentine republic toward the Adriatic sea. The Guidi family ruled all over this area up until their power came into conflict with Florentine expansion. Several of the castles were besieged and slowly, one by one, they fell under the Florentine domain. 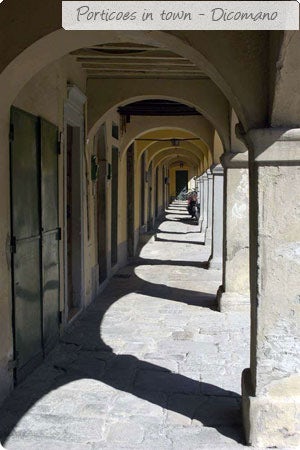 The oldest architecture in the town with its porticoes is evident testimony of the towns economic and cultural exchanges with the other side of the Apennines.

The geographical position predestined the town to develop into a large market town, the natural meeting point for various economic interests, mainly agrarian and pastoral, of the area.

Given its closeness to Mugello, Casentino, the high Val di Sieve, and to Tuscan Romagna – the most beautiful uncontaminated and natural areas of a fascinating region – the call to this area is a given.

Documents from the 12th century already show large markets and fairs were being held in Dicomano. Even today, there are two large fairs that take place in the spring and fall.

Held the first week in May, the May Fair is mainly dedicated to livestock shows but also includes lots of food stands offering local products and handmade crafts. The fair also offers entertainment and traditional games. 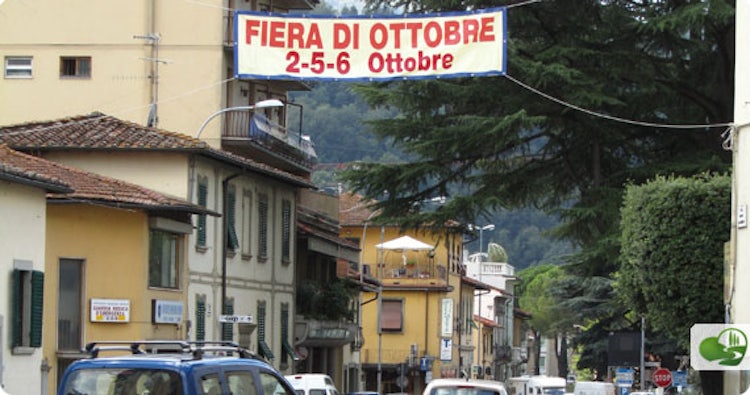 The autumn October Fair, also held the first week of the month, instead focuses on seasonal agricultural products including the local chestnuts called “marroni”, walnuts, grapes, olives and their products, wine and olive oil, and is enriched with historical parades and grape wagons from the nearby communities. 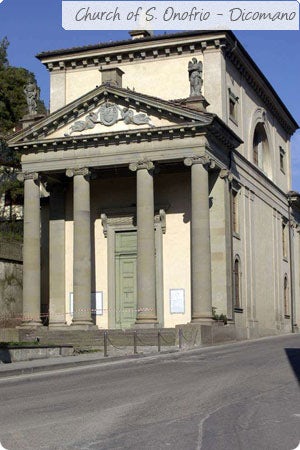 Between these two fairs is the Sagra of S. Onofrio celebrated on June 12th. The feast day for Dicomano's patron saint, protector of students and for those in search of misplaced items, includes a lively flea market as well as small antiques market and is held on the weekend closest to the official feast day.

The Oratory of S. Onofrio is an interesting neoclassical building dating to the end of the 18th century. Within, visitors can admire the “Madonna of the Spedale”, a painting attributed to the famous Andrea del Castagno.

The churches in the area are beautiful, often in the same architectural style found at Pieve di Santa Maria located on a small hill of the town.

This imposing parish church can date back its origins to before the year 1000 AD, but today presents the classic 3 naves with arched columns and visible stones, elegant in their harmonious Tuscan sobriety.

The inside houses important works of art, including a tabernacle from the school of the Della Robbia that contains the sacred oils. There are also precious paintings, among these the Madonna del Rosario by Santi di Tito, a student of Bronzino.

Next to the church is a tall bell tower with massive rocks which makes one believe it might actually have been a longobard watch tower at one point. 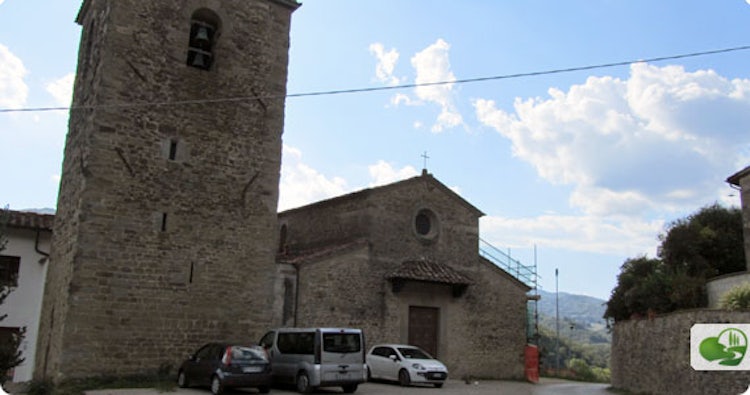 How to Get to Dicomano

Dicomano is easy to get to, both by car and by train. Dicomano is along the Pontassieve-Borgo San Lorenzo train route whether you're coming from Florence or other cities. From Florence, you can take the SS67 Tosco-Romagnola that passes through Pontassieve, while the “Traversa del Mugello”, the road that crosses the Mugello West-East, takes you to Dicomano passing through Barberino di Mugello after you leave the A1 highway.

These roads are best enjoyed at a leisurely pace to best enjoy the countryside views.

What to See in the Area 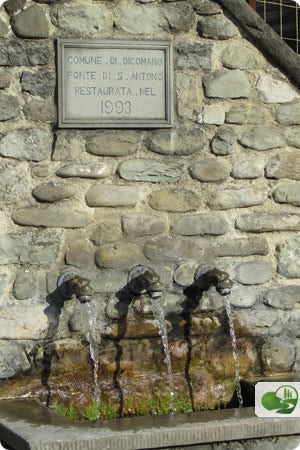 It is very limiting to say the attraction of the town is tied to is favorable location for commercial exchanges.

The expressions “smiling town” and “pleasant position” adapt to Dicomano quite well, if the usage or abuse of the terms hadn't taken away some of their significance.

In reality, the town with its tree-lined streets right away creates the welcoming atmosphere that makes one want to linger for a while. The various options for accommodation in the area demonstrate this.

Dicomano and its surroundings are excellent bases from which to meet various interests: the Mugello with is Medici villas is at hand, as well as more modern sounds of the Mugello circuit race track, the picturesque Bilancino lake and the outlet mall to spend a day shopping.

A few kilometers away toward Vicchio is the birthplace of the famous painter and architect Giotto, a fundamental foundation in the history of art.

Just a few kilometers further away climbing the Apennines is the house of another famous Renaissace painter: Andrea del Castago, whose hometown, Castagno d’Andrea, changed its name to honor the painter. In this same place are formidable traces of another great artist of our times, Pietro Annigoni.

If you're interested in a spiritual retreat or heading into the most natural of habitats still existing today, follow the road east and then follow the Arno river to head into the Casentino and to reach both La Verna and Camaldoli, Franciscan sanctuaries, found within the National Forest of the Casentino.

Industrial parks are far from this area, anyone wishing to get away from daily stress has only to turn in any direction and will find ample opportunities to unplug from the world.

The area includes many well-trodden walking trails (marked CAI), while motorcyclists or cyclists love taking the curves up the mountain to the Muraglione or Futa passes.

The art of the table has some of its deepest roots in Tuscany. Simple dishes, the result of tradition, precise flavors and forgotten aromas. Meats, cured as well as fresh, and cheeses are made here in a territory that is rigorously OGM-free.

As for wine, the area is home to the Chianti Rufina wine appellation, one of the many variations of the Chianti wine region that is just as great as the Chianti Classico denomination... many actually prefer it for its soft impact on the palate. You can do wine tastings at a local winery, such as Fattoria Il Lago's.

With a little bit of luck, you'll also find surprising local white wines and the Best Vin Santo in Italy right in Dicomano (produced by the Frascole wine estate).

Ready to discover this little jewel?

Born and raised in Florence, Umberto also enjoys a good knowledge of Siena and its special way of life thanks to his maternal grandparents. Unusual fan of both of these two magnificent, longtime rivals, he harbors a special interest in their ancient as well as modern relationship. Former senior vice president and head of the international department of a Tuscan bank, once retired he discovered a new interest in country life and spends time researching the tradition of the amazing territory where his roots are. His writings have appeared in both books and magazines.

Visit Frascole and Dicomano, an important...