A Small Town with  Big Calendar of Events

Lucca is a lively city, with many squares and areas inside its walls filled with young crowds during every time of the year. Besides all the places - like bars, cafes and pubs - where people can have a drink at any time of the day and enjoy some time with friends, Lucca offers locals and tourists a wide variety of events taking place throughout the year. That’s why this city is commonly considered as a place that welcomes you and therefore it  is always worth a visit, no matter what part of Tuscany you are staying in.

Among the events that you can find every year, the Lucca Comics & Games and the Lucca Summer Festival are the most important and popular among tourists and locals with no doubt.

Comics & Games: when fantasy reigns over everything

Lucca Comics & Games - which has been taking place in Lucca for many years now - is usually held during the last weekend of October and is considered one of the most important events dedicated to comics, cartoons, games, video games in all Europe. The manifestation offers an exposition area filled with hundreds of stands exposing a bit of everything and an area - actually spread out all over the historical center inside the walls - dedicated to exhibitions, shows, live performances, role playing and board games, historical reenactments of medieval games with people dressed up in costumes of the period, wearing armour and so on. Since the manifestation mainly takes place within the ancient walls, the setting is, obviously, incredibly suggestive, with all those bastions and underground itineraries playing an important role and being, actually, the ancient city prisons. 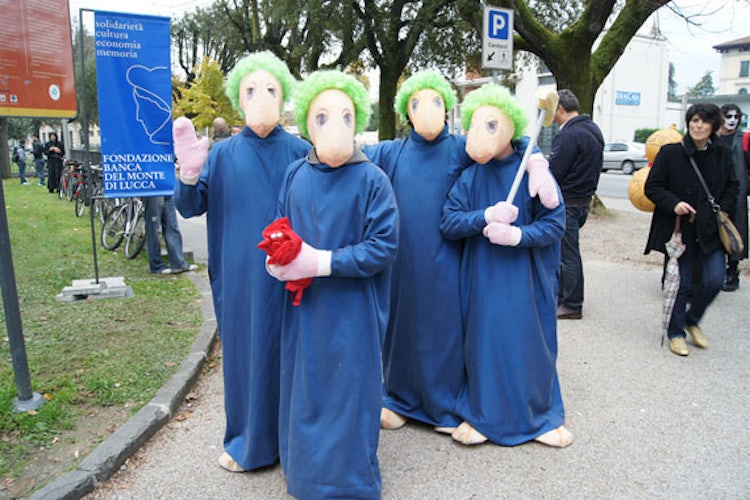 But the most amazing side of this fantastic festival is - to me and most of those visitors who come to enjoy the magic atmosphere of the manifestation - represented by their protagonist, the cosplayers: people dressed up like cartoons and comics characters, wearing very detailed accessories with such a realistic make up that you can hardly distinguish if they’re real or not! So if you happen to drop by Lucca during the last days of October, don’t miss to include this event in your scheduled visits!

The Lucca Summer Festival, takes annually place in July and always welcomes some of the most popular and renowned musicians, singers and bands of any time, coming from all around the world. A series of dates with high quality music always draws people coming from all Italy and Europe who eagerly await concerts like those that are, for many bands, their exclusive Italian or European date. This coming July, for example, Bob Dylan (plus Francesco de Gregori), Paolo Nutini, Billy Idol, Elton John, Mark Knopfler, Robbie Williams, Lenny Kravitz and Snoopy Dog (just to mention a few). Piazza Napoleone is the place where usually concerts are held, but sometimes artists are welcomed to perform also in Piazza Anfiteatro (I happened to see a Patty Smith's concert many years ago). A whole month of great music that you shouldn’t miss out if you are in Lucca in July.

Following on from the Summer Festival, Lucca is also home to the Winter Festival that usually takes place from October to December with a wide choice of concerts held in the Teatro del Giglio in Lucca; Gino Paoli and Mario Biondi are some of the artists performing during the past edition.

Let's keep talking about music, there’s another outstanding event in Lucca, usually held in April at Foro Boario: Lucca Blues Festival. This festival, being only in its second year, is not as popular as the one held in Pistoia (Pistoia Blues) that is taking place for many years now, but it welcomes anyhow blues bands and singers alternating throughout the second weekend of April (this year). 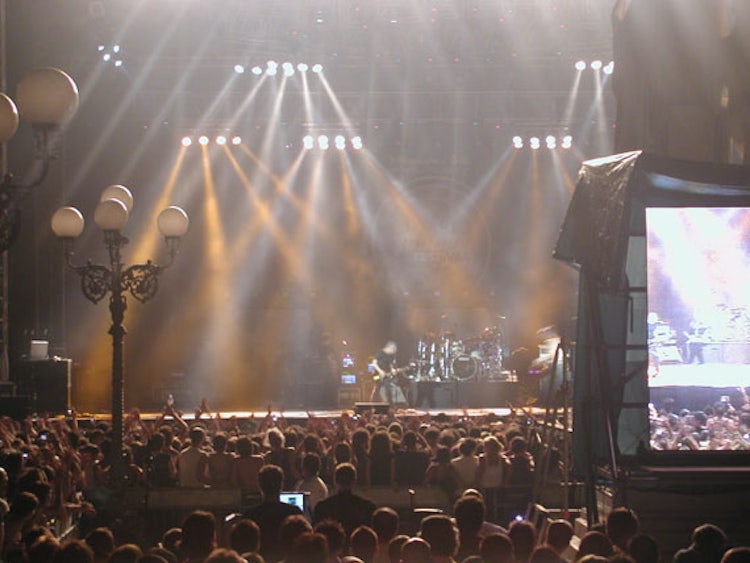 The last musical event that has been included in the annual calendar of the city is Lucca Jazz Donna that last Autumn was in its 10th year. Held in October, it consists in some great jazz concerts (six during the past October) performed principally by women single artists or bands.

The Settembre Lucchese: religion and enterteinment

Leaving aside music, another important event that takes place every year in Lucca is connected with the Catholic religion: the Holy Cross Celebration, held on September 14. A procession leaves from the Basilica of San Frediano and winds its way through the city to get to the Cathedral of San Martino, where the Holy Cross is preserved. The most suggestive aspect of the procession is the luminara: all buildings located along the procession route are illuminated or decorated with candles, as well as all the participants bring little candles or lamps for creating a sort of parade of lights with a very enchanting effect!

The Holy Cross Celebrations, however, are part of a larger manifestation that has been taking place in Lucca for many and many years now in several location across the whole city throughout the entire month of September: the Settembre Lucchese. Typical products stands, agricultural fairs, markets, exhibition and an amusement park that always attract thousands and thousands of people!

Running across a marvellous landscape

Yes, we run! is the slogan advertising another event taking annually place in Lucca, or to be more precise, in the countryside just outside the city: the Marcia delle Ville (Running the Villas), which this april (25-26) will be on its 39th years. For all sports passionates, this is a fixed date: both expert runners or amateurs will find something to sink their teeth into! There will be competitive races running on different length tracks - from 3.5 to 28 kms - all winding their way through the magnificent historical villas that have contributed to made this outside part of Lucca famous throughout the world. The longest track runs through all the 11 villas, the farmhouses and working farms, offering a sort of jump back in time, completely immersed in that wonderful artistic and cultural reality that makes Lucca and its countryside so special. Many rest stops offering local specialties and drinks will be located along the tracks and at the arrival. Cost: 2.50 euro, everyone getting to the finish line will be given a prize.

Lucca's respect for the environment

Being in its 6th year, Mercatini in Cortile (Markets in the Courtyard) is an annual event held in the Foro Boario, close to the Serchio river, three times a year usually in April, July and December. Considered one of the most important occasions on the Lucca territory for exchanging and exhibiting vintage objects, these markets are mainly aimed to sensitize people to the respect of the environment and recycling. Entrance is free, anyone interested in exhibiting small pieces of furniture, old clothes, books and so on is allowed to place his stand, open to both private persons and associations.

A culinary date with the typical flavours of Lucca and the province is called  Il Desco. This is a manifestation annually held in the Real Collegio in the very heart of Lucca center in late October - early November (in 2015, being in its 10th year, Desco took place from November 14 to December 8).  Not only is it an exhibition and market for the special ingredients that are found only in Lucca, but it also traces the recipes that grew around these ingredients. - as a leit motiv - all the culinary tradition of this marvellous city. 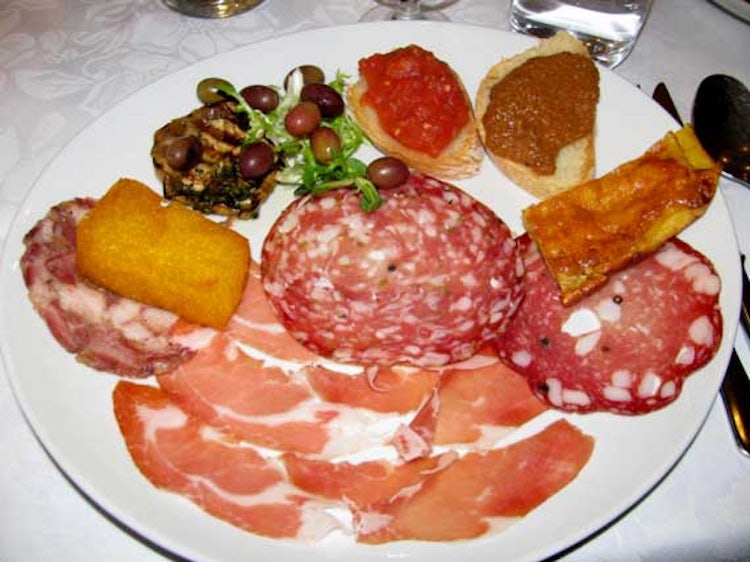 The first international festival dedicated to paper came into being in Lucca, about 11 year ago and now it’s a manifestation that takes place every two years: Cartasia. Paper monuments and huge sculptures welcome visitors coming from everywhere in Europe, attracted by these peculiar masterpieces of paper art: the manifestation, in fact, consists of several international contests which universities across the world and Tuscan schools among the first are welcomed to participate for realizing these authentically amazing works. Last year, Cartasia took place from June 28 to August 2, 2014.

Last, but not least, the European Festival Francigena Melody Road: being in its 4th year, this musical festival isn’t limited actually to the city of Lucca: it’s designed to retrace a trail running along some of the locations (13) on the Francigena Road with 18 dates during which concerts and live performances connect the most representative theatres and religious places of the Francigena Road. Music will be obviously the leit motiv - or the soundtrack - of this trip into the social identity of a community and its deep sense of belonging to the same cultural background, in a sort of tribute to the universal language of music represented by its various genres, from classical to lyric, from jazz to theatre song. Artists performing during this festival usually dedicate their shows to the most important themes related to the Francigena Road: pilgrimage, travel, hospitality. This year, the festival took place throughout the months of February and March (from February 2 to March 31).