Monteriggioni represents one of the most important walled castles in the territory. It has incredibly preserved an intact structure as if time had never passed on the hill from which it elegantly dominates the surrounding landscape.

It is nestled in the province of Siena, between this beautiful city and Colle Val d’Elsa. Its perfect circular perimeter makes one suppose it to be an artficial construction while in actuality it was created by just following the curves in the natural ground.

The castle was built by the Sienese between 1213 and 1219 for defensive purposes: its strategic location atop a hill overlooking the Cassia Road allowed the castle to control the cities of the Val d’Elsa and Staggia and be on the lookout for any armies approaching Siena.

The intact fortified wall presents 14 towers along which the guards used to walk and patrol the walls and 2 gates, one called the Franca or Romea Gate which faces Rome and the other known as the Florentine Gate since it heads toward Florence.

The current structure of the village is essentially the original one, the only changes it went through date back to the 16th century when the towers were lowered and some earth accumulated at the base of the walls and another dating back to 1921 when 3 of the 14 towers were reduced to the level of the walls. Who knows why? 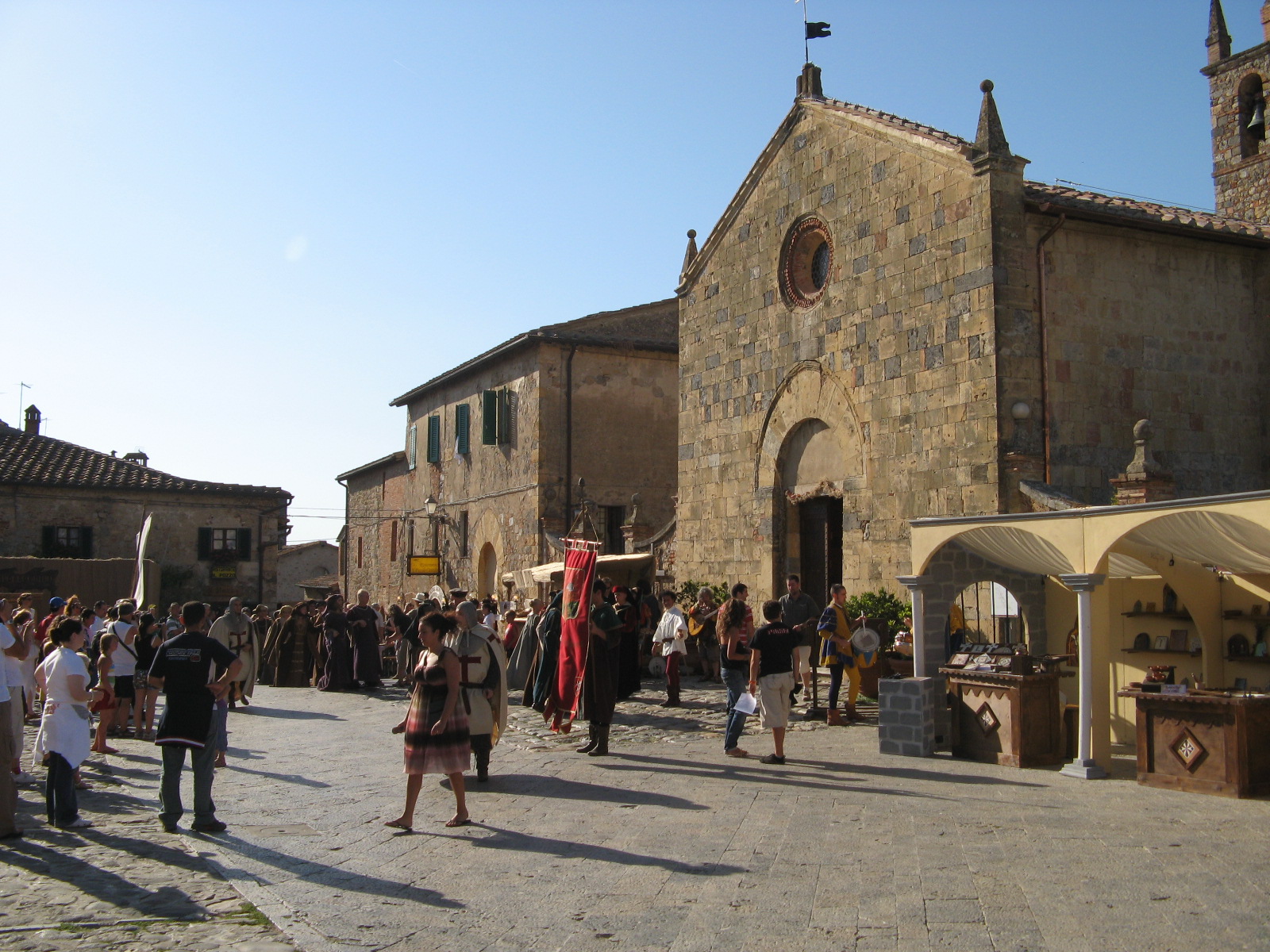 As you turn off the main road to arrive to Monteriggioni, you'll find a parking lot at the bottom of the hill. Leave your car here and follow the short climb to enter the small village through the Franca or Romea Gate. A few steps in and you're already in the heart of the village in the main Piazza di Roma onto which the Church of Santa Maria Assunta faces. Built at the same time as the rest of the castle, the church is in Romanesque and Gothic style. Back at that time, the piazza was a large vegetable garden that provided essential food items when the castle's population came under siege.

The reputation and prestige of this particular castle has a very consolidated notoriety because Monteriggioni was cited by the “Supreme Poet” Dante Alighieri in his most famous work, The Divine Comedy:

"As with circling round
Of turrets, Monteriggioni crowns his walls;
E’en thus the shore, encompassing the abyss,
Was turreted with giants, half their length
Uprearing, horrible, whom Jove from heaven
Yet threatens, when his muttering thunder rolls."
- Dante Alighieri, Hell, canto XXXI, lines 40-45

The Medieval Festival of Monteriggioni

Every July within the fortified wall of the town a special event is celebrated: the Medieval Festival of Monteriggioni, one of the most beautiful medieval festivals in the region.

The city goes back in time to the Middle Ages, the streets fill up with craftsmen, cavaliers and people in period costume creating a really enchanting atmosphere. Dances, live performances, music, theatre, kids entertainment, duels, acrobats, storytellers and more entertain the public as well as recreate the atmosphere of what chaotic life in a castle used to be like.

The festival offers a trip through history offering the chance to savor ancient flavors as well: taverns and restaurants are open all night long offering you a new experience dedicated to "wine and food" of those times.

We encourage you to exchange your euro with medieval coins to use to purchase food and more inside the castle.

You can find more information here about the Monteriggioni Festival.

Look at more pics of the town of Monteriggioni! » 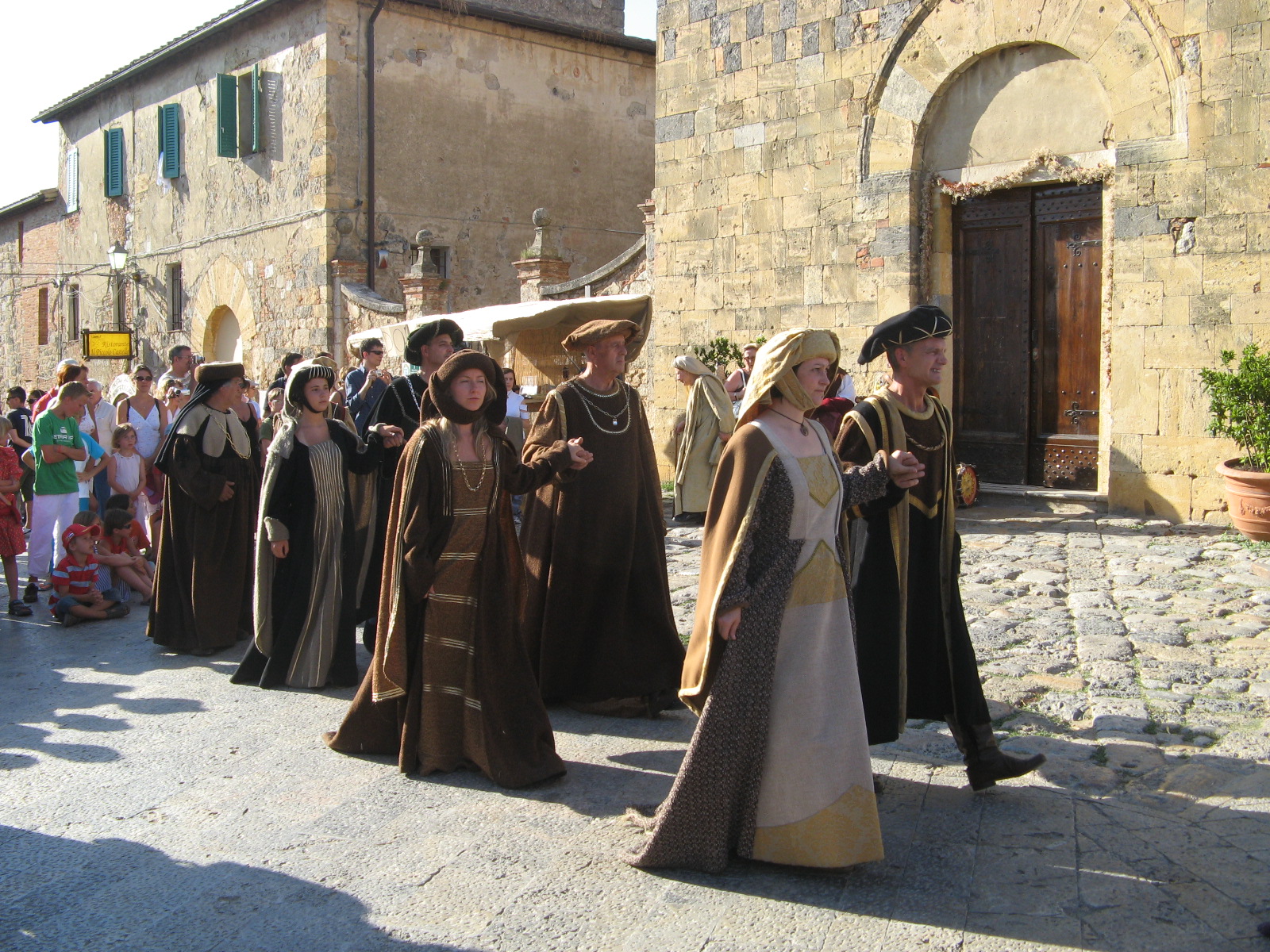