San Gimignano in the year 1300

We’ve been meaning to go back to San Gimignano for some time, wanting to visit San Gimignano 1300. This museum (although it really is much more) offers a beautiful, large and super detailed miniature reconstruction of medieval San Gimignano, letting us view the town as it would have looked like at the height of its maximum splendor.

From the center of San Gimignano, we walk down via San Giovanni: the entrance to this private exhibit does not have an easy to see sign at its entrance, just a large open door with a standing poster inviting people to visit the museum at no cost. Once we enter, we surprisingly find ourselves in front of a miniature reproduction of the castle of Monteriggioni, a place we know quite well but we see it here with its defensive walls complete with all of its towers, as it was in the Middle Ages. A young man comes and meets us, and we soon discover that Michelangelo Urbino is, along with his brother Raffaello, one of the artists that have created these ceramic miniatures. He explains that Monteriggioni is currently a work in progress, having come out of the kiln just that morning and we are one of the first people to get to view it. It will soon be painted and, once complete, be on display in Monteriggioni. Even unpainted, we find the ceramic representation of the town truly splendid as we study all the details of the walled town up close! 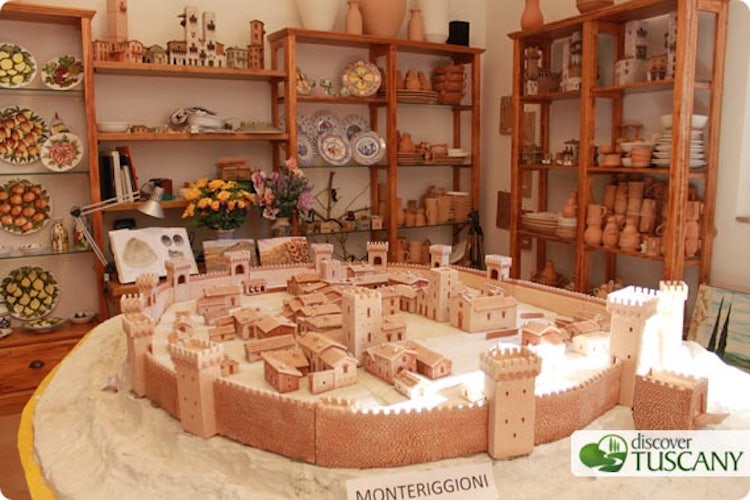 The actual exhibition space is in another area below. We follow Michelangelo as he leads us down and to the left and down again into a large, stone walled room lit with special lighting and sound effects that reproduce everyday medieval town sounds, as well as night and thunder.

In front of us, we see San Gimignano as how it would have appeared in the year 1300 and as a traveler would have observed it from a nearby hilltop. The city, at the height of its development, shows its 72 towers (even if it was called “city of 100 towers” or "of the beautiful towers"), imposing and transmitting a sense of power and independence: a point of reference in the Tuscany of that time. Being situated along the Via Francigena, the pilgrimage road that connected France to Rome, made it possible for the city to prosper and become an important economic center, with a population of 12,000 (today, population is 3,000).

Photographs cannot really depict what you feel as you admire the thirteenth century San Gimignano, nor show the level of detail of this 1:100 scale reproduction that takes up over 27 square meters of space. The miniature reproduction is completely made in clay, baked one time and then painted using natural pigments. Over a ton of clay from nearby Montelupo was used to create this work of art. Countless hours of intense historical, architectural and technical research was involved before actual construction could begin, a project that required over 20,000 hours of work by several ceramic artists. 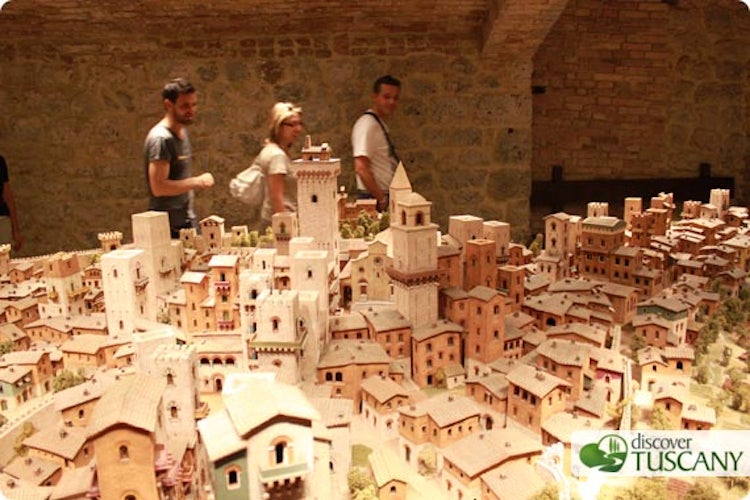 The Towers of San Gimignano

The towers belonged to the many noble and wealthy families that lived within the city. They were, first of all, a system of defense from enemies, including rival families living within the same town. The structure itself makes it an almost impregnable fortress: entrance was several feet above ground and accessible only with retractable ladders, the thick and high stone walls were hard to scale and difficult to give fire to. The miniature city shows the towers with its wood balconies and platforms that were integral part of the towers and which permitted passage from one level to another within the tower. These are no longer present today: the only remnants of their existence can be seen in the large holes where the beams that supported the balconies were lodged within the walls.

The lords of that time normally preferred to live in more comfortable palaces built right next door to the towers but these were the symbols of their power: the higher the tower, the higher the prestige of the family. Soon a competition was in full force to see who could build the highest tower until the city government was forced to set a limit by law: no tower could be higher than the Torre Grossa, the city government’s own tower which sits right next to city hall.

Many towers have interesting names and histories attached to them. The “Torre Rognosa” or “troublesome tower” was used as a prison, so its name comes from the fact that those that ended up there had had “troubles” with the law. The Twin Towers found in Piazza delle Erbe, on the other hand, were built to get around the height limit set by the city, as their heights summed up together exceeded those of their rivals. The tower called “of the devil” has inspired several legends, including one that says that the owner upon his return from a trip found the tower taller than it was before, and that this unexplained and mysterious growth was due to the devil’s work. 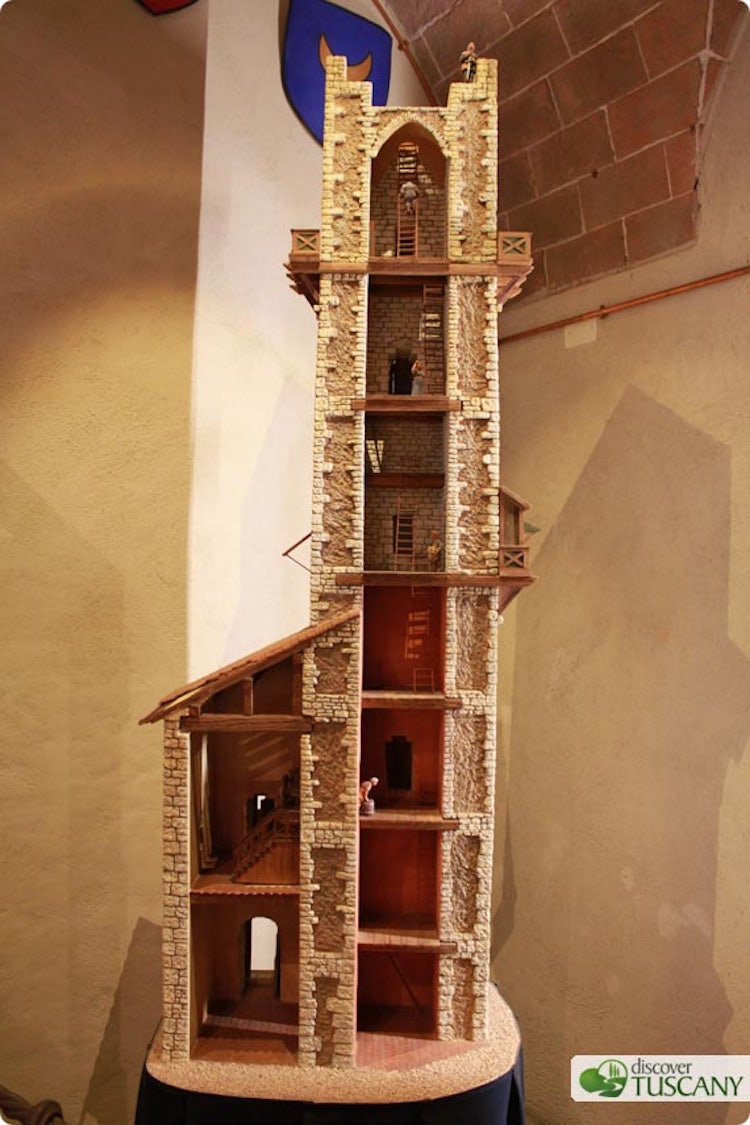 We learn all these interesting details and much more from Arianna, one of the guides present in the museum offering a wealth of information to visitors. Listening to her makes it even easier for our imagination to fly back in time to relive medieval San Gimignano, making the over 700 years that separate us disappear.

We also learn that the growth of San Gimignano, after flourishing around the year 1300, stopped suddenly in 1348 as the Black Plague hit the population and made many others escape from the town, leading to its slow demise and to its surrender (and loss of independence) to Florence soon thereafter. Many of the towers crumbled with the passage of time, not through deliberate acts of destruction as there never was an armed conquest of the city. It was also mostly saved from any type of destruction during the Second World War. Today, San Gimignano with its remaining 14 towers is unique and known as the “medieval Manhattan”.

Within the museum, we also find the reconstruction of the convent of San Francesco which was completely destroyed in the 16th century by Florentine forces to make way for an expansion of the fortified walls. There are additional, interesting reproductions of scenes of daily medieval life where we stop to admire the details as Arianna explains each scene.

We then visit the adjacent contemporary art exhibit in the company of Francesca who explains the history of the museum and the works displayed, beautiful pieces made by local artists and several of the same artists that made medieval San Gimignano. The souvenir shop has ceramics also made by the same artists, from pieces of medieval towers to more traditional Tuscan pottery perfect for taking home as a reminder of your vacation in Tuscany. We enjoy talking to the passionate people working in this museum so much that our visit ends around the time of closure.

Those in the surroundings and visiting San Gimignano definitely need to take the time to visit San Gimignano 1300, particularly in the company of one of the guides. Entrance is free but the guided visits request a donation, well worth it. A visit to this unique exhibit and work of art gives us, the visitor, the chance to see medieval San Gimignano with a new understanding of its history. For more details on hours and other initiatives offered (such as a treasure hunt through the city for kids and adults alike), check out the official website www.sangimignano1300.com. 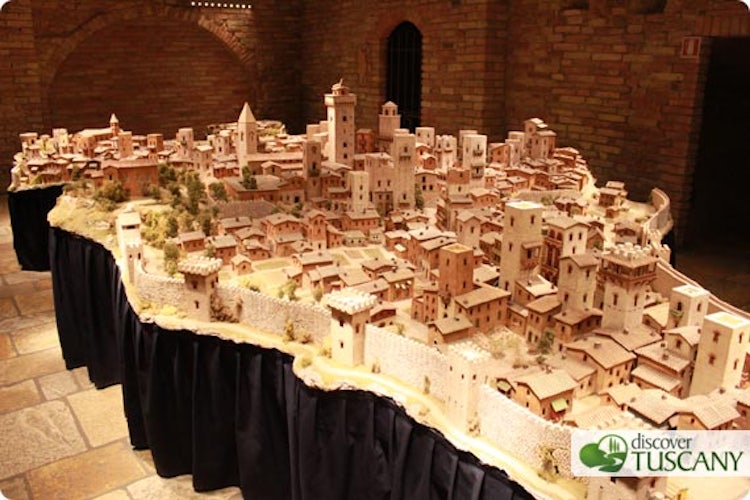 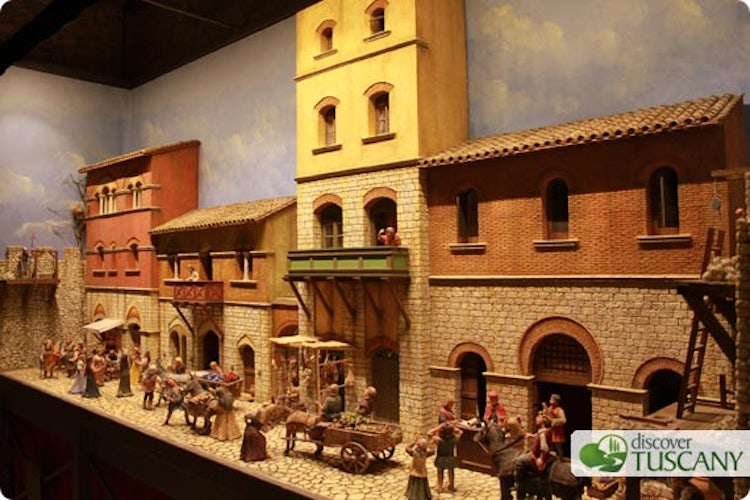 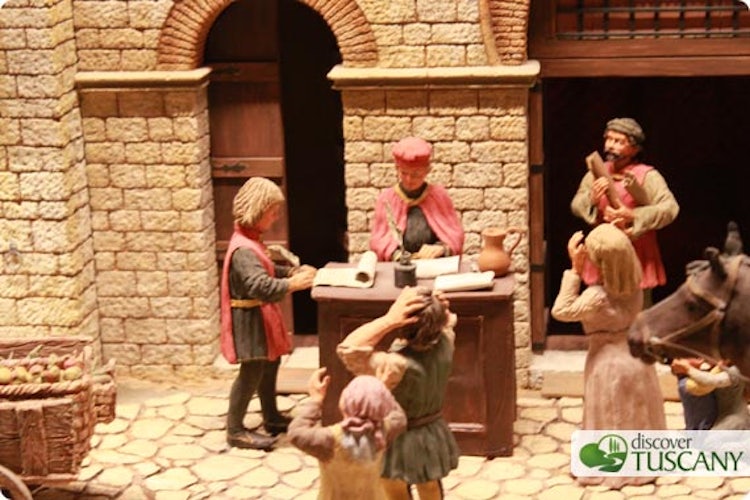 Getting to San Gimignano

All of the ways in which you can get to San...

Go on this day guided tour to the top sights in...

On holiday in Tuscany & based in San Gimignano?...