The city of San Gimignano is a precious jewel in Tuscany and one of the top places we recommend you visit when you are in Tuscany. The view of its medieval towers piercing the sky is what enchants every single one of us, whether we've visited it already or not. Its small medieval streets then finish the spell!

While it is quite a small town, this can be deceiving to the many visitors who arrive, walk uphill to its two main piazzas (Piazza Duomo and Piazza della Cisterna), look around, do some great shopping along its main street and then turn around and leave! While I can imagine most can say they've “been”, and many who arrive with tour groups can't do otherwise, the real enchantment of this town will truly happen to those who stay a bit longer, whether it is a complete morning or evening but even better yet an entire day as we have done.

The City/Civic Museums in San Gimignano

What better way to truly experience the magic of San Gimignano and its amazing landscape than to climb its tallest tower? You can, by heading to Piazza Duomo and into Palazzo Comunale who gives everyone the chance to climb to the top of Torre Grossa, which literally means “big tower” in Italian. All of the towers in San Gimignano were and remain privately owned and closed to the public except for this one, which continues to be part of city hall (which still houses its public officials today). 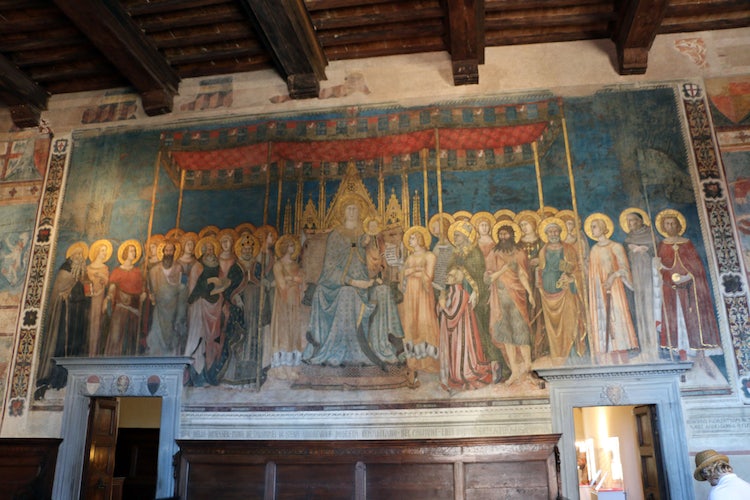 The Civic Museums are divided into two sites, the first one being Palazzo Comunale with its Torre Grossa. The Palazzo Comunale itself houses two important rooms with frescoes – the first are in the Sala di Dante (since it hosted the great poet when he arrived as ambassador from Florence to help negotiate a peace treaty) where you'll find the majestic "Virgin and Child" by Lippo Memmi and frescoes inspired by chivalry and courtly pursuits by Azzo di Masetto on the other walls. 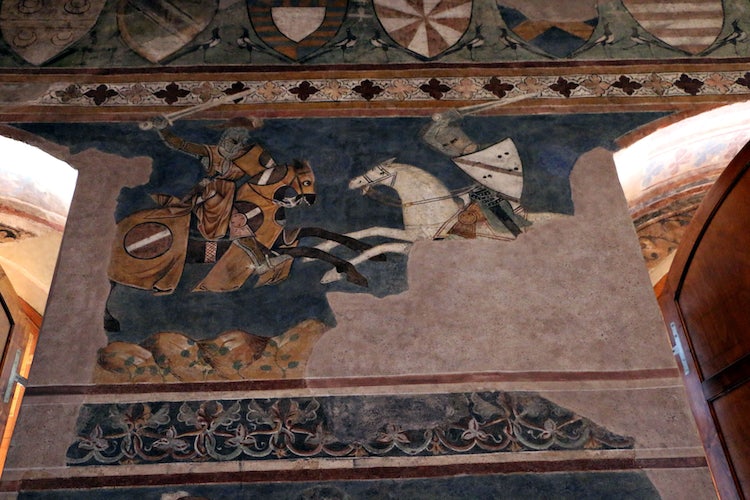 Sala Dante: Jousting is one of the many courtly pursuits depicted in this room, by Azzo di Masetto

You can at this point head straight for the tower, but I'd recommend visiting the rest of the Palazzo and doing the tower last. The next floor has the personal chamber of the Podestà, the “major” of the town in the 13th century, with the extraordinary scenes illustrating the snares of love by Memmo di Filippuccio painted between 1303-1310. These are very interesting, with scenes showing “profane love” as well as scenes from marriage. While some parts have not resisted the march of time (the entire room as painted), the scenes are a photograph of medieval times, both their dress and societal norms, and their colors remain amazing. 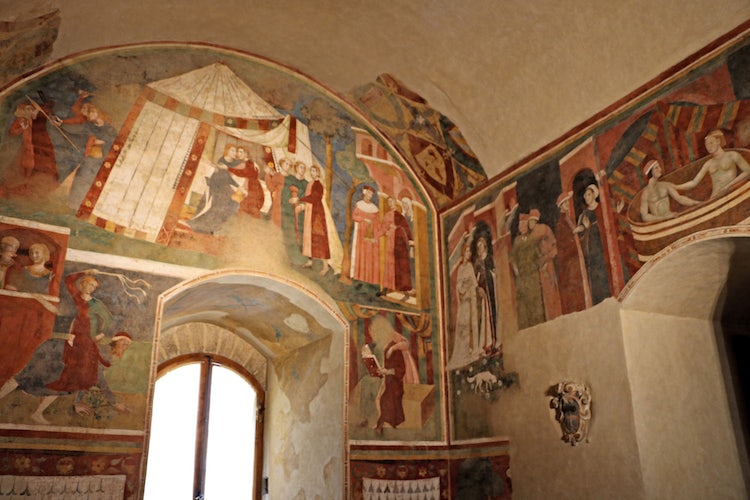 The Snares of Love, By Memmo di Filippuccio

An extraordinary way to visit both of these two frescoed halls is to to stop by the small bookshop as you enter the museum and ask for ArtGlass. In its experimental phase at the moment, it is an innovative way of viewing art with the cutting edge technology of virtual reality. Basically, a pair of glasses with sensors, special display and headphones will lead you on a virtual journey into the Middle Ages. The sensors can recognize the frescoes you're looking at and you will SEE and HEAR a virtual representation of the painter Lippo Memmi and a soldier as they lead you in the exploration of the stories within each wall. Truly an extraordinary and unique way to visit Palazzo Comunale (they are the first place in all of Italy experimenting with using virtual reality for art) we tried out and recommend! Since it is in experimental phase, it is free for now and you are asked to provide feedback so that it can be improved and made perfect. 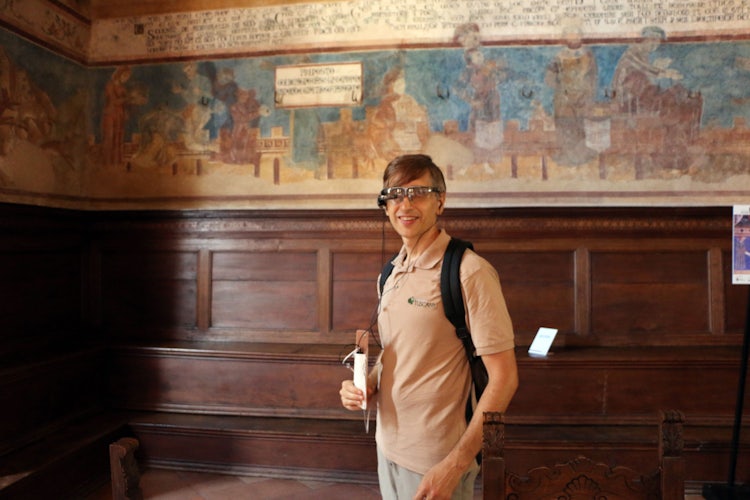 Across from this room begins the Pinacoteca, the city's collection of painted panels by Sienese and Florentine artists from the 13th to 15th century who came to San Gimignanto to create. The most well-known artists here are Filippino Lippi, Bennozo Gozzoli, Benedetto da Maiano and Pinturicchio. Take the time to search out the paintings of St. Gimignano and St. Fina who both hold and protect the town of San Gimignano in their arms. 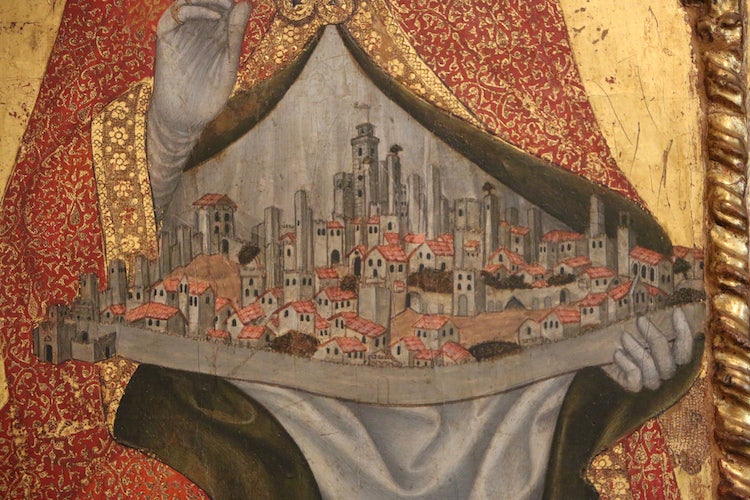 The town of San Gimignano in the saint's hands 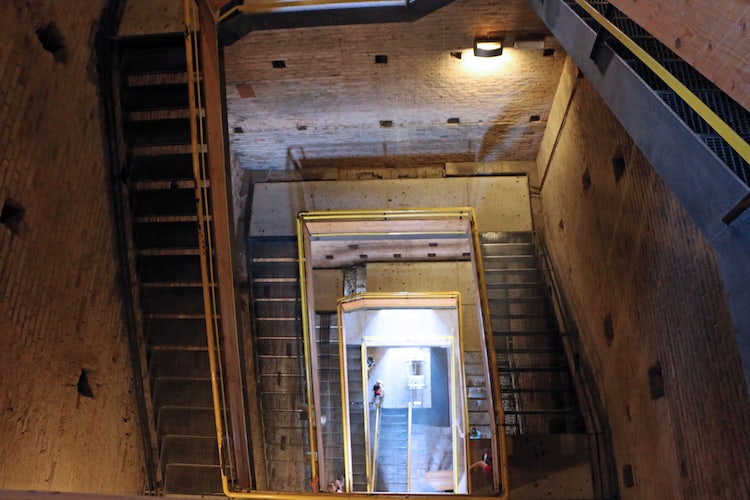 View of stairs inside the tower

Head back downstairs to head into and start your climb up the city's tallest tower standing tall at 54 meters. With no elevator, be prepared to climb up 218 steps slowly and carefully. While there are modern steel stairs today, take a second to imagine the entire climb up wooden planks and steps – makes me dizzy just to imagine it! The view at the very top is worth the effort so make sure you plan this visit as part of your time in San Gimignano, you'll agree ;). You're done with the first part of the museum complex, if you're here in the morning it is likely time to break for lunch or a gelato! 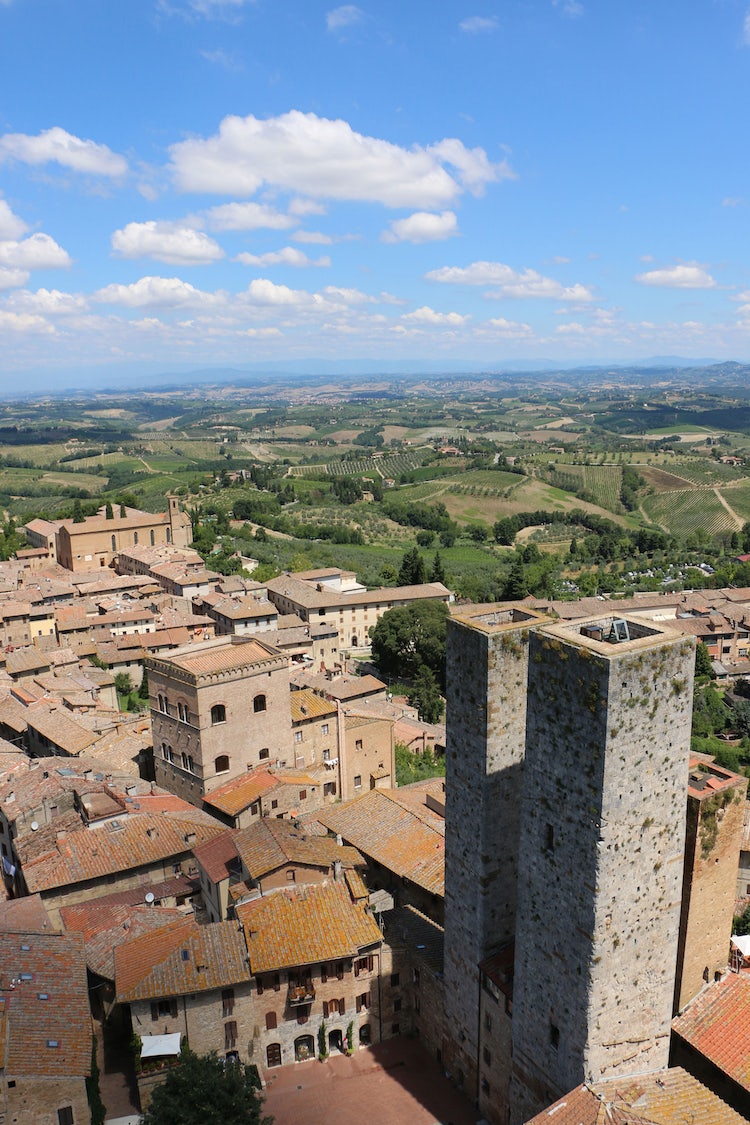 Just one view you'll see from Torre Grossa, which offers a 360° view

The second part of the civic museums is hosted down from Piazza Duomo toward Porta San Matteo, with a right on Via XX Settembre. It is right by the wall near parking lots 3 and 4. Your ticket includes all of the museums, so if you have the time, head to this other section. There is a great view of the many towers of San Gimignano right at the front door so turn around and enjoy it before entering inside. You'll get an even better view from the Gallery of Modern Art inside ;-).

If you're ready for lunch, one of the many options in San Gimignano would be to pick up a panino sandwich or slices of pizza to take away for a picnic. Many wine shops along the way would complete the meal. The museum complex here has a spacious, grassy garden area with tables and chairs where you could spend some time enjoying your meal. 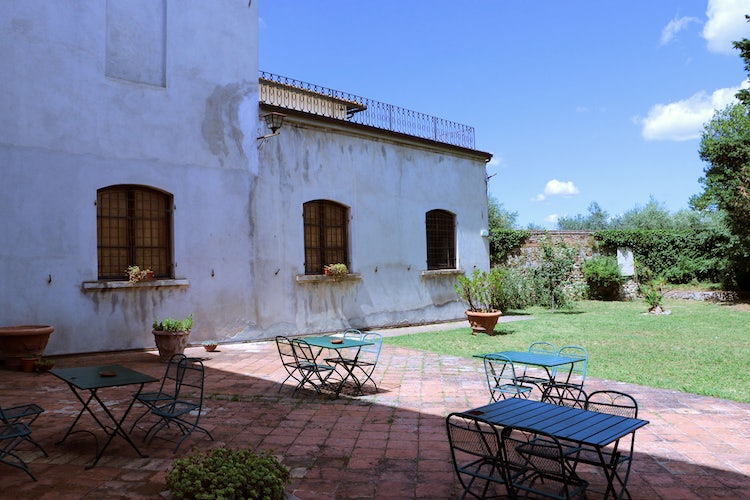 Don't think many know of this garden as it was empty

Once you've fortified yourself, the museum complex here has a little bit of everything for everyone. You don't have to visit everything, but should know what there is:

Here's more details on what we saw at each place.

The reconstruction of the ancient pharmacy divides the space as they were back then, into an area where they were made (workshop) and another where they were sold (counters). The layout showcases the collection of pharmacy vessels from the 15th and 18th centuries and glass containers from the 16th-18th centuries from the “spezieria” of the local hospital founded in 1253. In medieval Florence, the term spezieria was used for the guild of physicians and pharmacists, one of the city's seven major guilds. As you can imagine, through the centuries men and women have used local, natural plants and spices to treat and cure all ailments and sicknesses and thus the term of “spicers” for pharmacists was very common in medieval Italy. 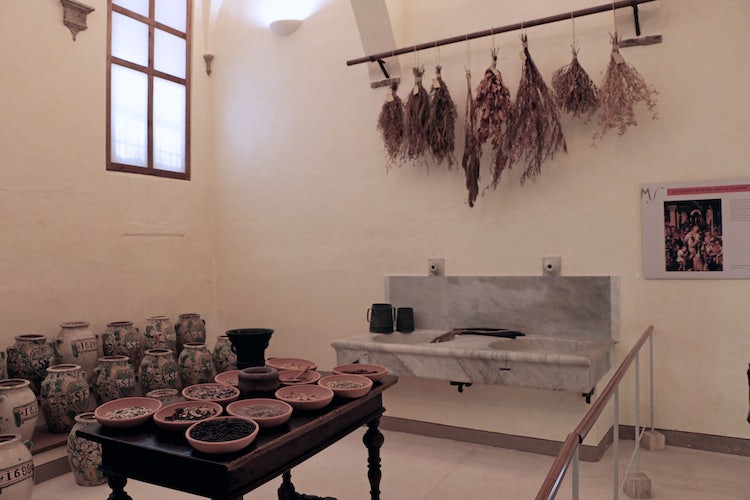 The workshop where medicines were created

I personally found the drawings and history showing the growth of San Gimignano through the 13th -15th centuries quite fascinating but also quite taken by the stone carved Etruscan funerary urns placed along a long corridor. I also particularly liked the Etruscan engraved mirrors (pictured above), but there are a lot of artifacts to admire and study and each room has some from different sites in the area. For anyone interesting in archaeology, this is the perfect museum from which to then head out to explore the local territory. 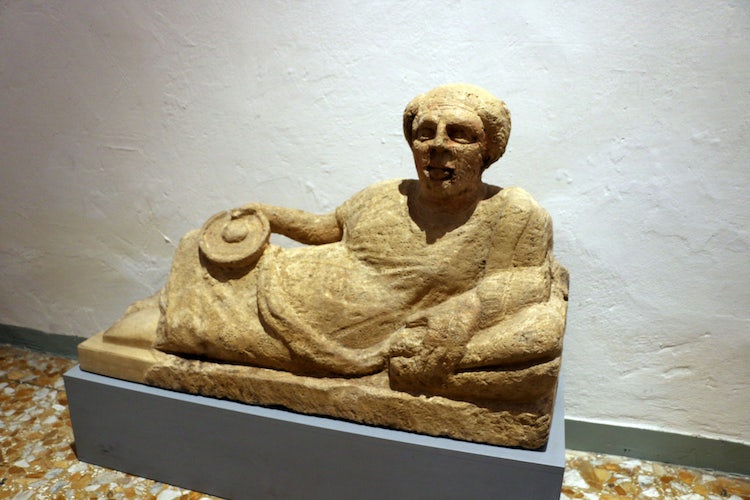 Etruscan tomb coverings from sites in the area

The Gallery is named after Milanese painter Raffaele De Grada (1885-1957) who chose San Gimignano as his home. The permanent collection includes numerous paintings by this artist as well as works by 20th century painters such as Niccolò Cannicci, Renato Guttuso, Sergio Vacchi, Ugo Nespolo, Marco Gastini and Carmelo Zotti. 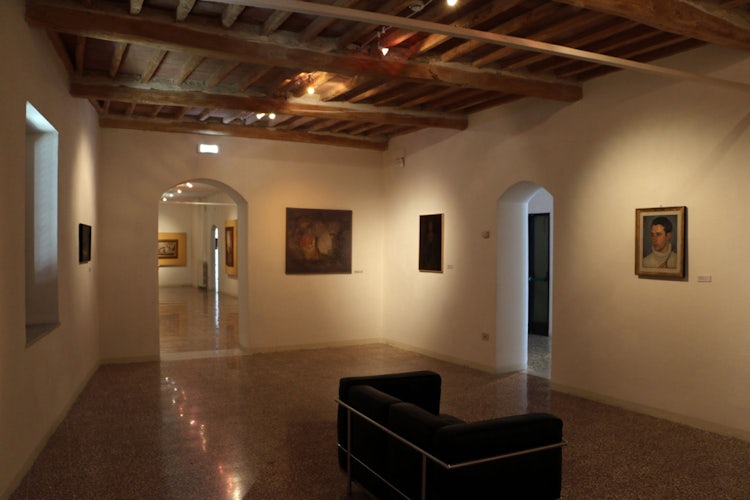 View of the rooms, quite deserted while we visited

As mentioned above, the ticket to the museums allows you entry to all of them and is actually valid for two days. If you're staying anywhere near San Gimignano, this means you could actually spread out your visit to one site one day and the other one on the following day.

Make sure to also visit the Duomo of San Gimignano while you are in Piazza Duomo, it is one of the best kept secrets of San Gimignano since the exterior of the church does not hint at the treasures within.

If you have more time to spend in San Gimignano, you can also explore the fascinating San Gimignano 1300 museum which has recreated in small scale in clay the entire city of San Gimignano. It shows how the town looked like in 1300 with all of its towers, many which no longer stand, and how they looked back then with their wooden balconies. You can also climb to the top of the town to visit the remains of the old fortress, the Rocca di Montestaffoli and visit the small museum dedicated to San Gimignano local white wine, la Vernaccia di San Gimignano. Another attraction is the Torture Museum which has instruments of torture, not for the light of heart. 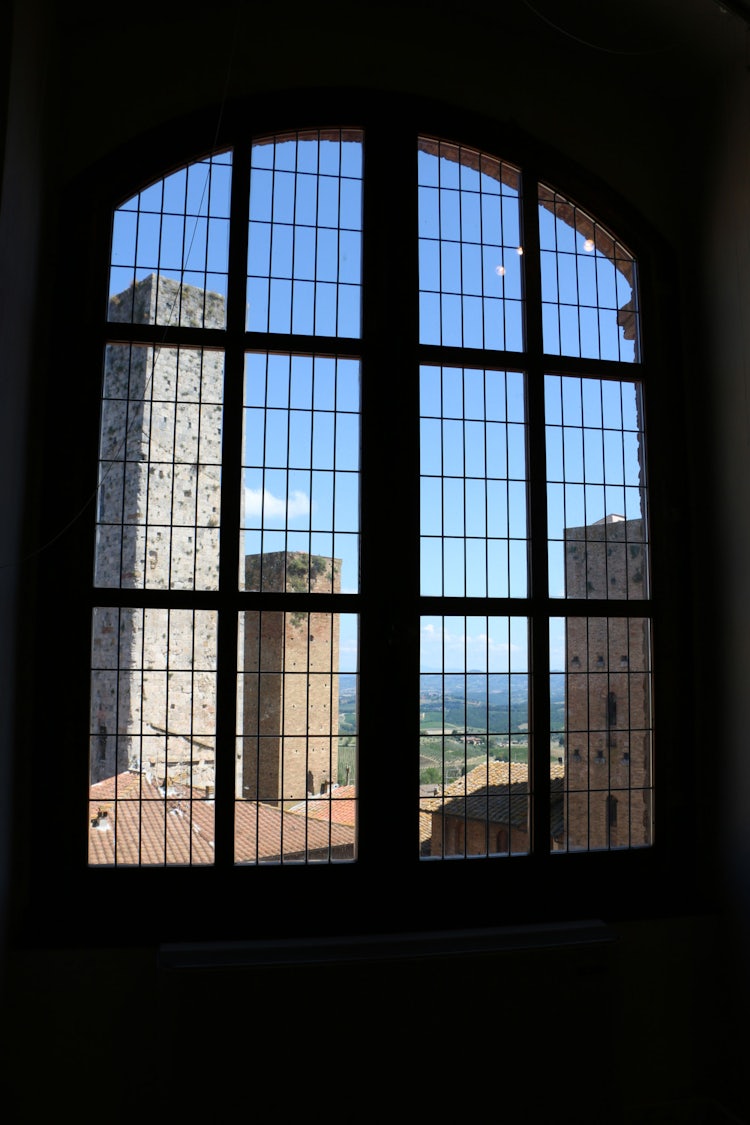 View from inside Palazzo Comunale from the Pinacoteca

Entry allowed up to half an hour before the closing time of the museums.

A single ticket is valid two days and offers entrance to all six museums.
Full price € 6,00 / € 7,50 with temporary exhibition
Reduced price € 5,00/ € 6,50 with temporary exhibition - for children between 6 to 17 years old, senior over 65, groups of 20 people (up to two companions with free admission), groups of students from public schools in educational visit (up to two companions with free admission).
Free entrance: children under 6, residents of San Gimignano, persons with disabilities who need support and their escorts, travel guides, ICOM card holders.
Groups: 50% discount on the “coach tax” for groups with a booking for San Gimignano Civic Museums. In order to receive this discount, you need to call 0577 286300 and make your reservation.