An Afternoon at the Home of Leonardo...da Vinci!

We recently visited the birthplace of Leonardo da Vinci, and in particular, the house where he lived which has just reopened to the public after a careful restoration project.

The home of Leonardo isn’t found within the town of Vinci, it is just outside its center on the foothills of Montalbano in a village called Anchiano. Here, Leonardo da Vinci was born on April 15, 1452 as an illegitimate child of a domestic servant and Sir Piero da Vinci, owner of the house at that time.

Many studies made Anchiano famous as the birthplace of Leonardo, particularly the one by the great expert and fan of da Vinci, Telemaco Signorini, in whose diary “1872. Gita a Vinci” (“1872, Trip to Vinci) he documented his visit. In the period right after, the town became an important pilgrimage site, and many scholars and tourists have come here to study and discover the origin of the Tuscan genius.

The home, its splendid landscapes and the drawings by Leonardo of the surrounding territory represent the only testimonials of the deep bond between the master and his Tuscan land.

The Home of Leonardo Museum 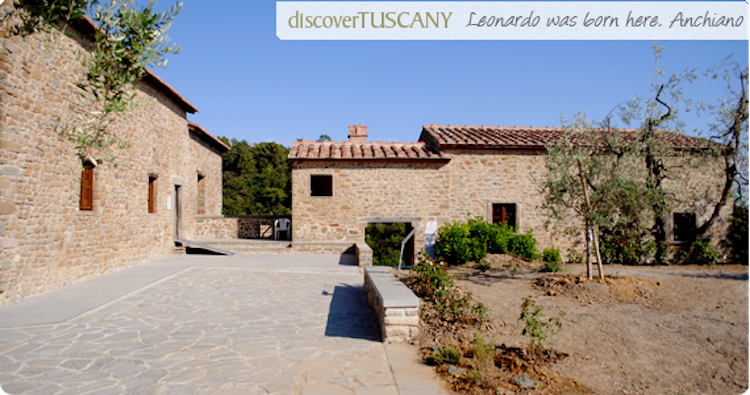 The house of Leonardo reopened to the public in June 2012 and shows interesting changes and new additions.

Daniela Lamberini, teacher at the University of Architecture in Florence at the head of the restoration project, has given particular relevance to the multimedia within the new museum.

The room next to the ticket office offers the history of Leonardo as an artist through a virtual itinerary, starting from his entrance into Master Verrocchio’s workshop to arrive to his most important artworks, including the fresco The Last Supper. You can interact with the paintings screened on a wall through the Leonardo Touch application by just moving your hands.

To the left to the ticket office, visitors can find the stone house where he lived composed of 3 rooms: the first one has an old fireplace, a wooden table and a carved face of a serious Leonardo with a long beard who seems to stare at all visitors entering the room. The room to the right collects some panels with the history of the house while the one on the left hosts the main new addition to the museum.

Here, visitors are welcomed by a life-sized hologram of an old da Vinci who entertains the public by directly recounting his life story, sharing information on his land and some details of his quite mysterious private life. 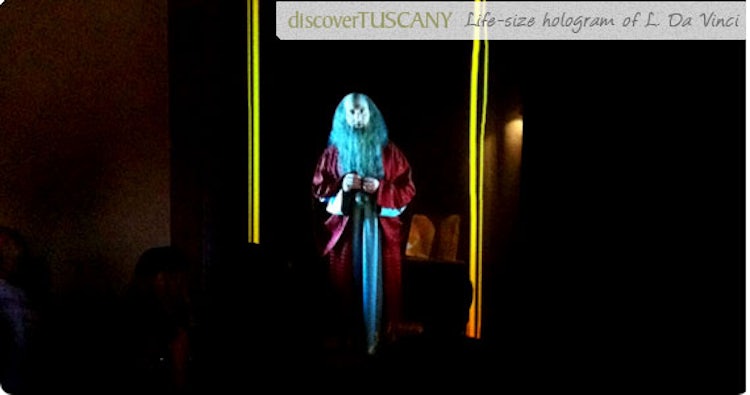 This virtual representation of the Tuscan master had a very successful effect, taking us several seconds to realize that it is not someone real playing Leonardo in the flesh but only a holographic representation. The tale is recounted both in Italian as well English since so many foreign visitors go to Anchiano to visit Leonardo’s birthplace and the surrounding landscapes which are fantastic!

As you arrive here, you can feel in the air the deep connection that exists between Leonardo and those landscapes and the impossibility of separating them. The gentle hills, the wide fields of vineyards and olive trees and the sun itself are integral parts of the museum and of its history: this beauty has doubtless contributed to envelope and influence the fantasy, wits, creativity and genius of one of the greatest men in the world. 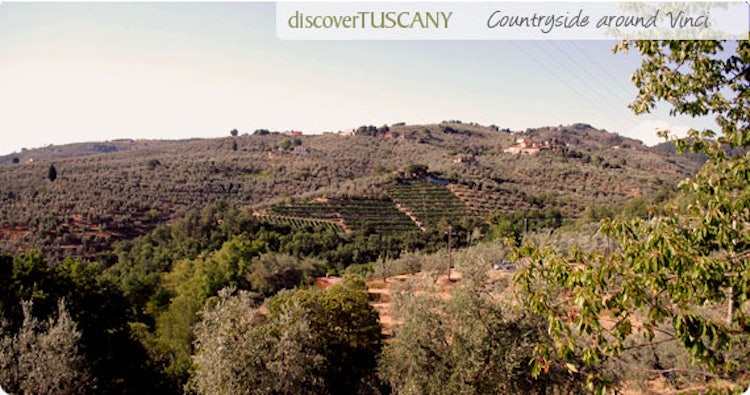 It doesn’t seem to be coincidence if he was born in this inspiring land of which we are very proud.

From Anchiano, you can follow one of the many itineraries that allow you to explore the surrounding territory. One of the most beautiful is known as Strada Verde (or Green Road) that links Anchiano to Vinci through a very old trail through the woods, surrounded by the natural beauty of this corner of Tuscany.

The Town of Vinci

Vinci itself offers visitors the chance to see many places connected to Leonardo’s life.

Behind the castle of the Conti Guidi, in the small but lovely center of town, you will notice a wooden representation of the Vitruvian Man, a drawing by Leonardo in which he represented a man with the ideal proportions. From this terrace, you can enjoy a wonderful panorama of the surrounding hills. 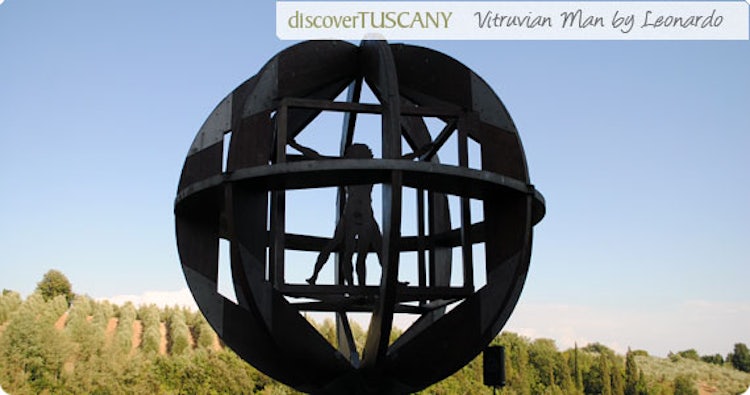 The Leonardo Museum is arranged in two buildings which cover the history of the master both as architect and scientist. The permanent exhibit covers the life and work of the genius da Vinci through machines, digital reconstructions of his projects, high-definition, full-scale reproductions of his paintings and many details and anecdotes of his life. The museum hosts education activities for children that allow them to put themselves in the shoes of Leonardo the artists, the scientist and engineer.

At the end of October 2016, a brand new section on "Leonardo and Anatomy" will open and new activities will be added for kids and adults alike on Leonardo's interest for the human body. We highly recommend a visit to this museum because it is interactive and fun!

In front of Palazzina Uzielli, which hosts part of the museum, you will find Piazza dei Guidi, designed by the artist Mimmo Paladino, who was inspired both by Leonardo as scientist as well as artist in the design and construction of the square. 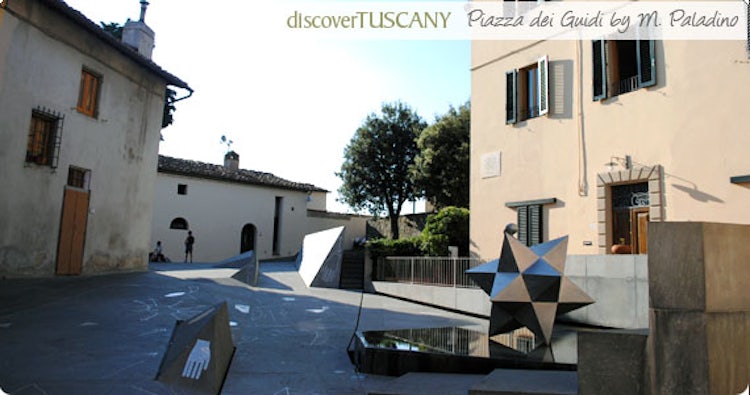 You should also have a look at the Church of Santa Croce (of the Holy Cross) where Leonardo da Vinci was baptized and at the bronze monument sitting in Piazza della Libertà called Leonardo’s Horse. Anyone interested in learning much more about Leonardo can visit the documentation center specializing in his works at the Biblioteca Leonardiana.

How to get there:

Take a train which stops in Empoli. (Italian Railways website: www.trenitalia.com). From here, take a bus which heads to Vinci, ask at the bus station for bus schedules.

From either Pisa or Florence, take the highway FI-PI-LI and exit in Empoli. Here follow the signs that indicate Vinci. The journey takes about 20 minutes. Anchiano is only 3 km from Vinci, you will easily find signs to get to the Birthplace of Leonardo!