Recent News about Tuscany Around the Web 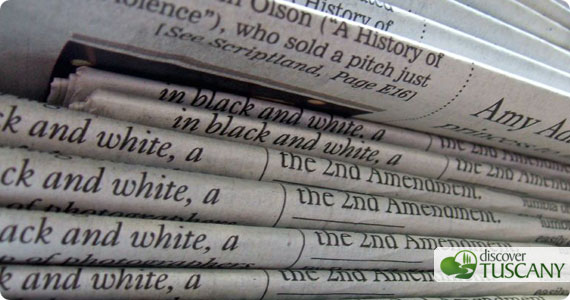 Good and bad news in and about Tuscany

We have decided to start a new blog’s column, if we can call it this way. Every week we’ll collect the most interesting articles about Tuscany and its cities and regions. News telling about its excellence and about its worst. The following are the main articles and news about Tuscany of the past weeks:

Chianti Waste-Less – Florentine Chianti municipalities –  Barberino Val d’Elsa, Greve in Chianti, San Casciano and Tavarnelle Val di Pesa, will start producing less waste following a revolutionary project. The municipalities will provide restaurants, offices, shops, accommodations, as well as events and fairs with a “waste-less” logo in order to promote their green attitude. They will also promote a healthier and greener lifestyle for citizens, as well as the re-use of packaging and the construction of new salvage centers. 🙂

The best Resort in Europe – The Most excellent charming hotel, the most desired prize for luxury hotels worldwide by the guide Condé Nast Johansens, has been awarded to Monsignor della Casa Country Resort in Borgo San Lorenzo. This luxury hotel in Mugello near Florence has been recognized as the best European accommodation for its hospitality and for its atmosphere, that perfectly preserves the ancient look of the historical village.  🙂

Collapses in Roselle – After the shocking pictures of the collapse in Pompei (Naples) in Tuscany it raises the alarm for the collapses of the Etruscan walls of Roselle. The city of Roselle is one of the few Etruscan cities that has preserved the whole city walls, almost 3,5 km. A part of the walls has been fenced in because of the serious risk of collapses.  🙁

Diana Goddess Sanctuary in Alberese – In Alberese within the Maremma Natural Park, has been been discovered the sanctuary of the Roman Goddess Diana, goddess of virgins and wild animals. The temple dates back to 2nd-3rd centuries b.C. and covers about 350 sq. meters. Within the temple archaeologists have discovered three statues depicting Diana and her brother Apollo as well as some coins and several lamps. The temple is well preserved.  🙂

The most beautiful coasts in the world – National Geographic drew up a list of the most charming coasts in the world. In the top 10 there was the Italian Cinque Terre, that as been described as a European treasure and a virtuous example to be followed. 🙂

Florence, a Top Destination – Florence has been voted the most beautiful and enchanting destination in the world by TripAdvisor.com. The city excelled cities such as Paris, Washington, Rome and Venice. Last week the young city major Matteo Renzi accepted the prize on behalf of the city of Florence.  🙂