The Divine in Modern Art

At first glance, it might seem that Florence is stuck in the past, with its masterpieces of the Renaissance in its museums, churches and streets. Florence’s main museums are full of religious artworks, commissioned by large families for their churches and chapels, which today are recognized as some of the most magnificent works of art, so precious and amazing that they form the large majority of museum collections.

It would be too easy to forget that Florence has continued to inspire artists in their own art through the ages, providing the example of the masters of the past as inspiration as well as something to aspire to test their mastery. So while we all might know of Van Gogh’s Starry Night or Sunflowers paintings or Pablo Picasso’s Guernica, can we really be surprised to find that they also painted Crucifixions or Resurrections? It might not be what you expect from our “modern” artists, so a visit to Palazzo Strozzi is in order while you are in Florence.

The current exhibition at Palazzo Strozzi, called “Divine Beauty: From Van Gogh to Chagall and Fontana“, focuses on the hundred years from the 1850s to the 1950s and to the artwork created in that time with a religious subject. Running until the second half of January, it should be a very interesting opportunity for anyone that enjoys the work of modern artists, both Italian and international, well-known and a little less, such as Edvard Munch, Vincent Van Gogh, Renato Gattuso and Marc Chagall.

When I went to visit the exhibit, I wasn’t sure what to expect, as most of the art you find in Florence’s museums is religious in nature. It was thus exciting and provocative to find a modern take on the same subject matter as well as discover that the Roman Catholic Church actively encouraged innovative forms of expression in this time period.

The exhibit is divided into 7 sections. Here are some things to know about or that impressed me about each:

1 – From Salon to Altar: as you enter, you are greeted by several impressive altar pieces. Quite eclectic in styles, the trend is to use naturalistic and narrative style style of painting then in vogue. The sheer size of them in this space is very impressive.

2 – Mystic Rose (Madonna): around the turn of the century, the Virgin Mary was popular; every work found in this room is most definitely modern in style. Edvard Munch’s Madonna turned out to be one of the most provocative images of Mary to emerge in the 19th century. I can imagine that might have been the reaction then, but it is very Munch.

3 – This central section echoes the narrative of the Gospels and each room is in chronological order. The life of Christ underpins the section, starting with Annunciations to the Virgin Mary and continuing on with the Nativity and Childhood of Christ, Miracles and Parables, The Passion, Last Supper, Via Crucis, Crucifixion, Deposition, Pietà and finally the Resurrection.

In this section, you’ll find works by Glyn Warren Philpot, Maurice Denis, Stanley Spencer, Pablo Picasso, Marc Chagall, Renato Gattuso, Lucio Fontana and Vincent Van Gogh. I recommend you visit other museums in Florence before coming to Palazzo Strozzi, so that you have a recent view of the same subject matter to compare to. 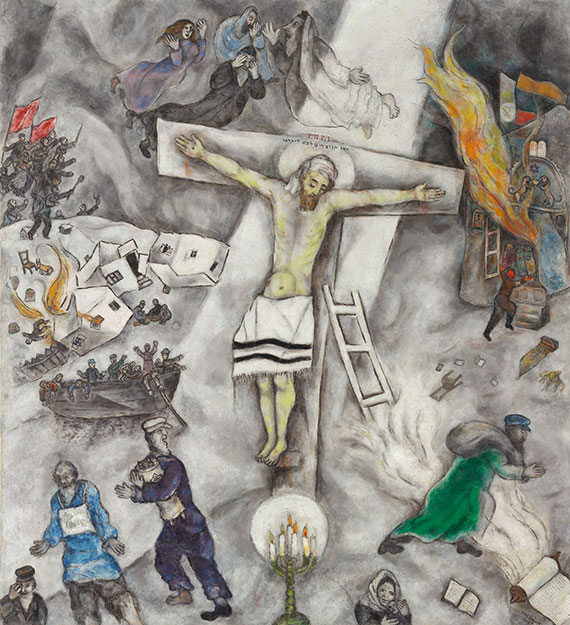 4 – Severini: Mural Decoration from Spirituality to Poetry – it is supposed to be a philosophical dialogue of the artist with Maritain but I admit it went over my head. What do you think of this room?

5 – Spaces of Sacredness: this section dedicated to Architecture is interesting as it illustrates the multiple solutions adopted between the 19th and 20th centuries in the construction and decoration of Catholic places of worship. Anyone that ha entered a recent Cathloic church will surely realize the modern influence in their place of worship.

6 – The Church: a reflection on the public side of religion with a priest chasuble done by Matisse (from the Vatican Museums) and a marble statue of St. Francis by Adolfo Wildt that is quite striking.

7 – Prayer: explores the private and intimate dimension of prayer. A quiet room to end the exhibit before you end up in the book shop

As my last post also focused on contemporary art in Florence, we can say that right now in Florence you will get the chance to compare the classic to modern and contemporary and see how one has influenced the other.

Divine Beauty: From Van Gogh to Chagall and Fontana
Palazzo Strozzi
September 24 – January 24, 2016
Open daily from 10am to 8pm, on Thursdays until 11pm. Last admission is 1 hour prior to closing time.
Admission 10 euro, reduced tickets for children and others