The unbearable lightness of being the Uffizi Gallery 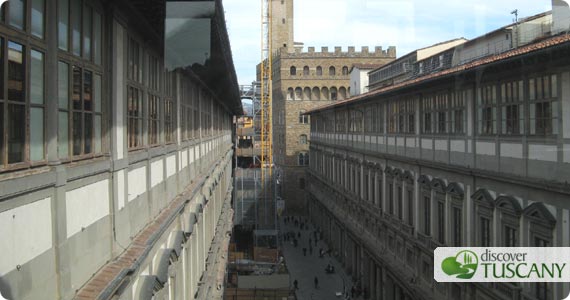 In the last issue of Venerdì di Repubblica I read a well-written but highly critical article about the Uffizi Gallery and more in general about the conditions of Italy’s cultural heritage. The article throws light on the situation artistic and cultural treasures in Italy find themselves in and, in particular, focuses on Italy’s top museum (second only if we were to consider the Vatican Museums).

The Uffizi Gallery has about 1,5 million visitors every year. Visitors come from all over the world to visit the Uffizi’s unique collection which includes works by Botticelli such as the Birth of Venus and The Allegory of Spring, works by Leonardo da Vinci, Masaccio and others great artists from the Renaissance. The collection also includes works by European artists such as Dürer and other Flemish artists, as well as the Medusa by Caravaggio, Madonna with Goldfinch by Raphael, works by Andrea del Sarto and Canaletto. These are of course just a few of the thousands of works in the collection. Legend has it that the Uffizi’s storage cellars contain almost twice as many works which can’t be displayed for lack of exhibition space.

Space, or lack of it, is one of the Uffizi’s main problems: most of the paintings are really near each other, not lit correctly and often have no protection. There has been talk about these problems and how to resolve them for over twenty years. A solution might only arrive in 2015. As a matter of fact, work started in 2006 to enlarge the museum. The display area will be doubled to give the 2200 works of the collection more space. The Uffizi Gallery since then has looked like a battlefield: works in progress at the entrance and on the back where you exit, with mimes and peddlers all over the main square that are pleasant and colorful but also messy, while there still aren’t enough restrooms inside and a few areas are not accessible to everybody. And then the endless entrance lines that you can avoid by reserving tickets online or by phone. You can get all this for from €6,50 (€10,00 if there is a exhibit which unfortunately is not optional) plus the €4,00 extra for the reservation.

It makes me sad considering museums in other European cities. In London, museums are free or at some just request a donation, and the Louvre Museum in Paris costs less than € 11. I’ve been to many different museums all around the world and while the Uffizi Gallery collections are unique and extremely large and have no match, it is in the related services that the Uffizi can be improved.

The article by Venerdì di Repubblica seems to have incited a reaction. Yesterday, newspapers and national television news reported the nomination of a special administrator – and consequently a nominee of a compulsory administration – for the Uffizi’s project by the Italian government. This measure aims to speed construction works up so that the New Uffizi Gallery can be opened in 2012. What to say… I’m crossing my fingers so that it happens!

Despite the current conditions of the museum, I love the Uffizi Gallery and it remains one of my favorite museums because of its unique art and statue collection. If you love art, I highly recommend visiting it at least once if not more. I, like the critics at the Venerdì di Repubblica magazine, need to remember that the museum is a treasure to humanity that we need to cherish and take care of. The collection is a result of the avid art collecting the Medici family pursued starting in the 15th century and that the Uffizi itself was designed and built over 400 years ago by the likes of Vasari and Buontalenti, a treasure even the Germans spared as they left the city at the end of the Second World War. An extensive remodeling is in order but it is much better to take the time to do it right than to make a mess of it :). So let’s arm ourselves with patience for a bit longer.