Visiting Corniglia in the middle of Cinque Terre

The Oldest of the Five Villages

Nestled in the middle of the five towns, Corniglia sometimes gets overlooked due to the myth that there are no beaches. And the arduous stairway to the top of the hill probably doesn't help even if there is a bus that goes back and forth for those less inclined to sweat their way to the top.

Artifacts found in Pompeii, have historians dating the origins of this little town all the way back to the Roman Age. Markings on terracotta containers have helped them deduce even the origins of the name: the words Gens Cornelia, which translates into “from the (Roman) family Cornelia.” It is thought that Coniglia was probably a colony of slaves who took on the name Corenila, from the slaveholder who gave them their freedom. In the medieval times the whole area was ruled by the Earls of Lavagna, to be later replaced by the Fieschi family. As you stroll down the main road in Corniglia, you will note that everything revolves around via Fieschi. 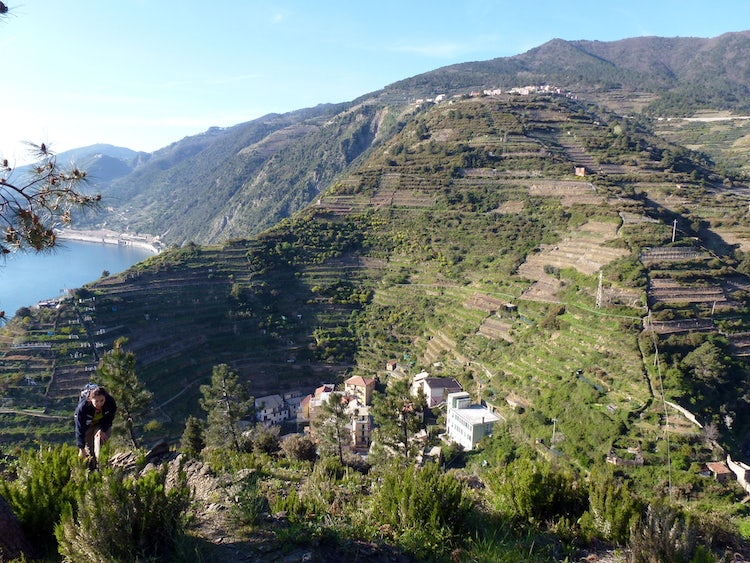 The town, without a port, relied more on its farming skills than fishing. They have carved the rocky and steep hillside to make it productive. The grapes are grown on terraced fields which are called “fasce” in the local dialect. Their specialties include the white wine of Vernaccia di Corniglia which was known as far back as the 1300's when Boccaccio wrote about it in his famous tales of the Decameron. The first wine production most certainly goes as far back as the Romans, as seen by the above mentioned anforas.

If you are willing to make the climb to the top (or the bottom) you will be rewarded with spectacular views and crystal clear waters and mostly probably (almost) deserted streets and beaches. There are actually quite a few places worth a visit at Corniglia - even for its small size.

More than see, this is an activity not to miss. There are a little more than 370 steps which will take you from the train station to the town of Corniglia, 100 meters above sea level. Though a difficult climb to the top, the accomplishment and the view are definitely a reward in themselves. For those who would much rather just take a photo of the steps but still want to make it to the top, there is a bus that runs frequently between the two.

586 This is a popular trail which is also called "Porcina", connects Volastra & Case Pianca, not too far from Corniglia. Difficulty: easy

Located in the main square of Corniglia, it is in a Baroque style, with some Gothic and Ligurian elements dating back to the 14th Century, distinguished with a Carrara white marble rose window. The patron saint of Corniglia is San Pietro (St. Peter) and he is celebrated on June 29th where you join the festivities and taste a local specialty made from rice, eggs and cheese (torta di riso). Another specialty called the Torta dei Fieschi, pays homage to the Fieschi wedding in the early 1200's. During the event, they re-create the wedding cake, whose recipe has been passed down through the generations but is very jealousy kept secret. The oversized cake is shared by one and all in the main square on the feast day. 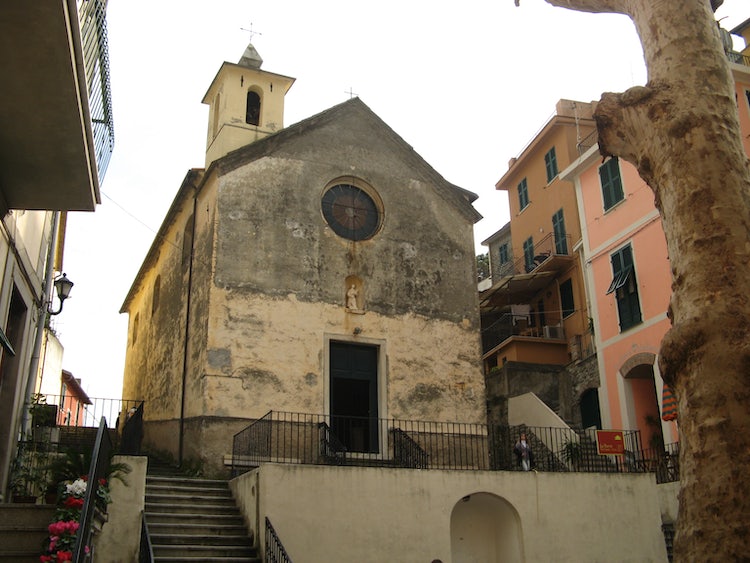 This panoramic point is reachable by foot following Via Fieschi, bring your suntan lotion and your camera, from offers some wonderful views of the sea. And in the distance even a peek at the other neighboring towns.

This Oratory graces the tiny piazzetta Largo Taragio. It is an 18th century Oratory and the highlight of the interior is the ceiling above the altar which is painted to look like the sky.

Just outside of Corniglia is the Sanctuary of Our Lady of Graces in the little town of San Bernardino, accessible by a shuttle bus or a short walk. It was founded by St Bernard of Sienna, Franciscan missionary and is a Catholic saint, who prayed in this area for many years.

The crystal clear waters of Cinque Terre are a bit more secluded when you get to Corniglia, but beautiful nonetheless. Its seems like a million shades of sparkling blue out to the uninterrupted horizon...but first you have to get there. And that means even more steps both coming and going - or you could look into renting a boat and anchoring just a bit off the coast. If you are up for the adventure, then here are the best two:

Probably the most noted because of the "clothing optional" tag, however it is also rather difficult to reach requiring a long walk through a dark tunnel. You can look for this one km long tunnel at the bottom of the Lardiana stairs - besides your towel, water and suntan lotion, be sure to have a flashlight...it can be a bit scary.

This beach was created as an accidental by-product of the new railway line, and is located fairly close (except for all the stairs ) to the train station. Note: be careful of high tide, which sometimes make this area not always accessible 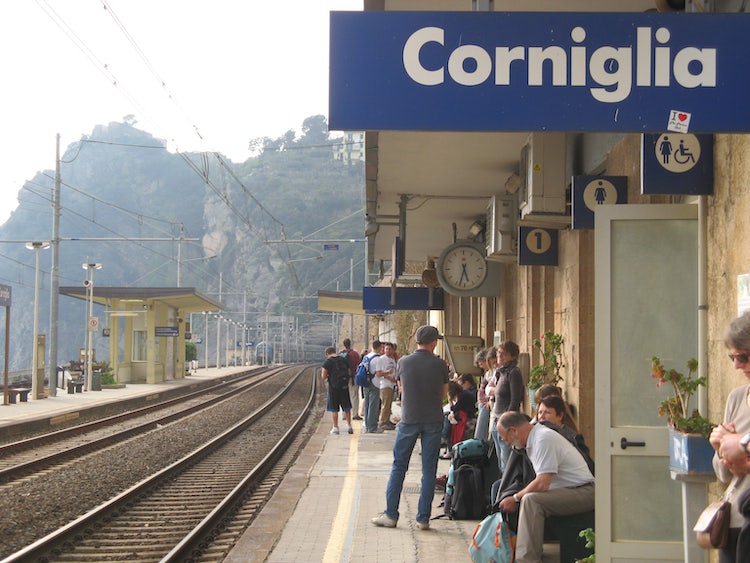 You can arrive by car if you have based your holidays in Tuscany or the Lunigiana area close to La Spezia, even if it is highly discouraged due to limited parking. Take the A12 and exit at Santo Stefano di Magra in direction La Spezia. Then follow signs for Portovenere, on the Litoranea. Use the exit for Corniglia. Access & parking is really reserved for residents only, who have an assigned parking space, or for loading and unloading deliveries. However, there is a loading area at the entrance of the city where guests can unload their luggage - but beware you only have 30 minutes.

The best way to get to Corniglia is by taking the train from La Spezia or from Levanto. For more information about getting around in Cinque Terre read our article. From Corniglia you can head south to visit Manarola or you can head north to visit Vernazza, both of which are visible from the panoramic terrace ain Corniglia.