Packed with things to See

The town of Manarola, most probably antique slang for “the big mill stone", sits along both the coast of the Tyrrhenian sea and the Groppa river which flows down to the sea. At the northernmost point of the town it is possible to see the river, however towards the train station and the modern "piazza" it is covered and the only thing that reminds you it is there is the sound of rushing water … but only when all is silent.

Together with Corniglia, Manarola is one of the smallest of the five towns that make up Cinque Terre. However where Corniglia was remember in the past for its wine production, Manarola is still an active producer, hosting the Cinque Terre wine cooperative, after a labor intensive vendemmia (grape harvest) most of the area's 300 growers bring their grapes to be made into Cinque Terre D.O.C. white wine or their signature sweet dessert wine sciacchetrà. 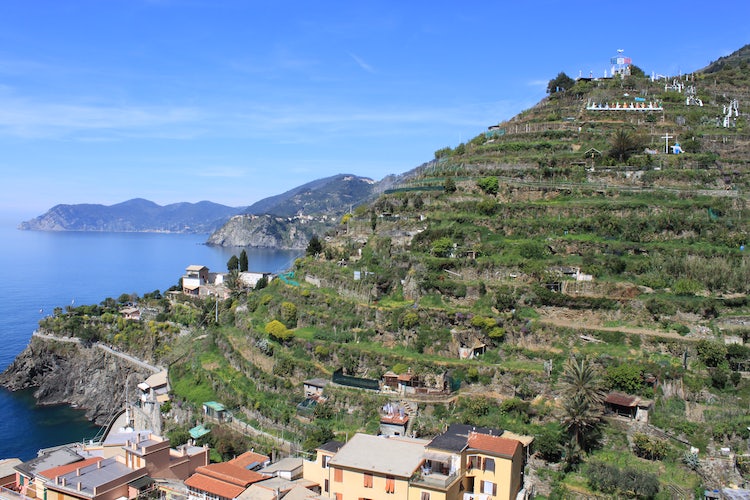 The patron saint is celebrated every year on August the 10th, where San Lorenzo (St. Laurence), goes on procession to Palaedo and returns to the Marina where the statue continues to his name sake church.

Even a small town like Manarola has a few monuments to search out and admire. Humble as it maybe these places are the history of the town starting with the “Mulino" for which historians believe the name derives.

The small rocky harbor serves as not only where boats can be set to sail, but also as one of the more panoramic positions to admire the town of Manarola. The deep waters also provide an excellent swimming hole for the more adventurous enthusiasts. 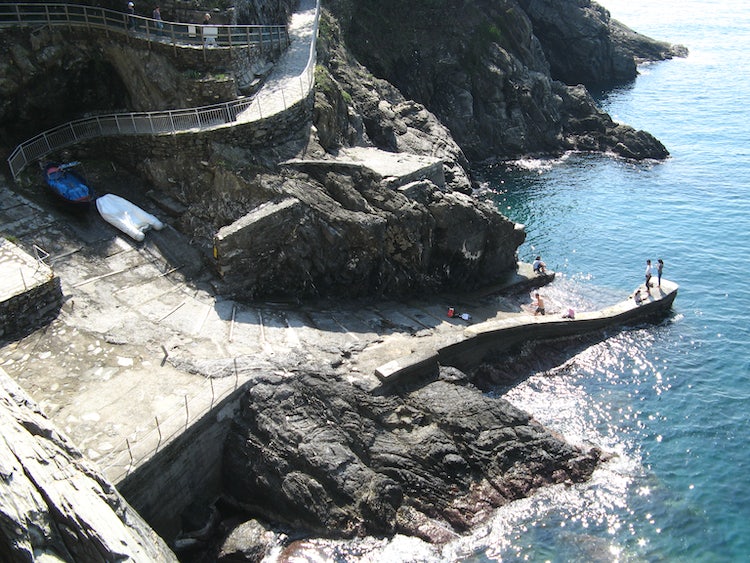 Check the condition of the trails, before attempting to use them in this area.

Oratory of the Disciplinati of Manarola

In the same square of the church of the Nativity of the Virgin Mary, we find the XV century oratory of the Disciplinati, of the Santissima Annunziata or of the Azzurri. On corner of the the main road is Lazzaretto, the ancient hospital or of Saint Rocco.

The construction on the church to the town patron saint was started in 1338, as testified by a corner stone engraving. Above the main entrance to this medieval church is a beautiful rose window from 1375. The 14th century bell tower, with its square base, was an ancient defensive building

The Bastion or the Castle

The coast was often raided by Saracen, (the European medieval term for Muslims) pirates and the castle, built as protection from these raids, became the nucleus of the village. Though parts are still well preserved, the remains of the bastion, dating from the 13th century is now partially incorporated into the modern building that cling to the coast looking out over the sea. 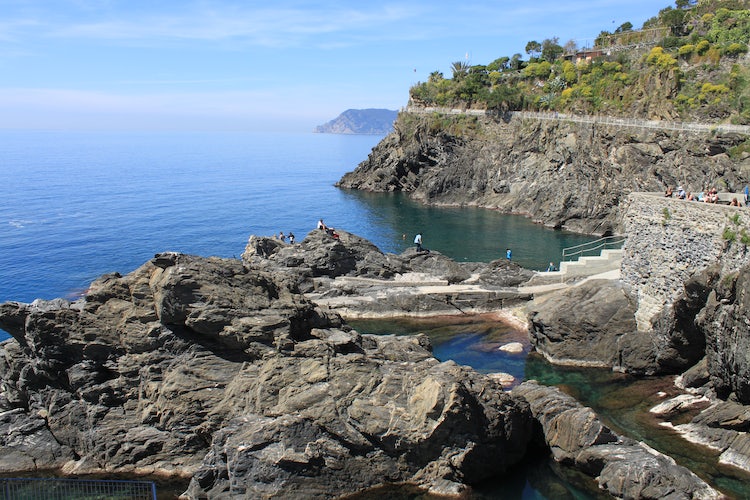 Manarola is the perfect hiking destination with several places that will either give you a glimpse of the “real" Cinque Terre or fantastic panoramic views. Many of the trails, though steep, will take you directly into the local vineyards and olive groves.

Named for the river which flows towards sea, this small town, about a km above Manarola, can be reached either by foot or bus or by car from the main road. Particularly charming and uncrowded, it is an excellent example of the classical “carugi", a system of narrow and dark stone-paved roads linking homes and steep stairs. There is limited free parking available.

One of the oldest little towns in the National Park of the Cinque Terre, with Etruscan origins, the town Volastra was built on the Roman road Via Aurelia which runs along the coast. The name is derived from “Vicus Oleaster", the land of the olive trees, and is perhaps one of the more enchanting places along the Cinque Terre still maintaining its terraces for the cultivation of vines and olive trees and dry-stone walls.

Elevated above the village Volastra, stands the Romanesque church dating from the tenth century, dedicated to Our Lady of Health. The church was built entirely of sandstone blocks and decorated by the Gothic portal and mullions dating from the twelfth century. 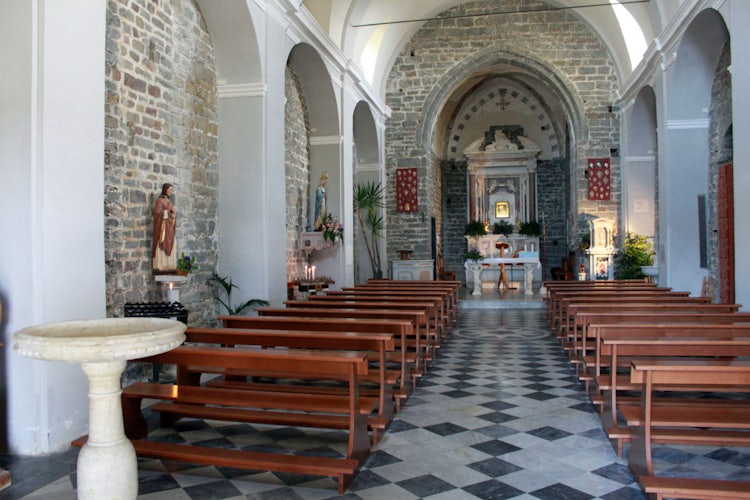 You are planning on arriving by car to Manarola (even if it is highly discouraged due to limited parking), take the A12 and exit at Santo Stefano di Magra in direction La Spezia. Then follow signs for Portovenere, on the Litoranea road. Use the exit for Manarola.

Access & parking is really reserved for residents only. When you arrive at Manarola, you'll reach a traffic bar preventing you from going further down into the village. On the right of the traffic bar, there is the paid parking and fees are around 25 Euros per day. It's not a big parking area, so spots are limited, especially during summer weekends.

The best way to get to Manarola is by taking the train from La Spezia or from Levanto. For more information about getting around in Cinque Terre read our article. It would be wise to note, that not all the local trains stop in Manarola. Check carefully before boarding. 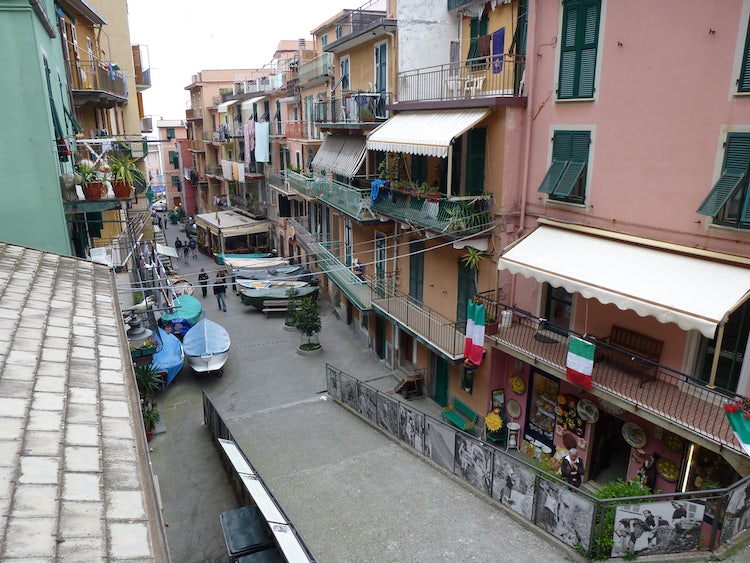