Monterosso and its Celebrated Beaches

The Splendor of the Cinque Terre

The northern-most entrance into the coastal towns of Cinque Terre is a sparkling blue jewel with its beautiful sandy beaches! Monterosso has been completely isolated for centuries, and it has a history steeped in defending itself from the every constant danger of raids by the pirates that terrorized the coastline. Though it would appear that the area had been occupied since the paleolithic age, we have no definite notice until the 1056. Over the years Monterosso and the other 4 cities that make up the Cinque Terre, have been fought over constantly by Genova and Pisa, until finally in 1254 Monterosso can under the domain of the government of Genoa. 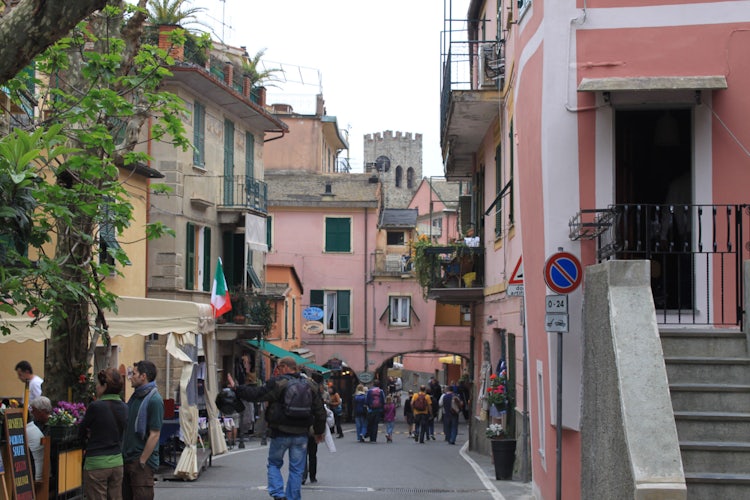 Almost Left Out of the Cinque Terre

Positioned in the center of a natural gulf, which is now protected by an artificial reef, Monterosso al Mare is divided into two sections by a tunnel of about 10 meters. The Old and the New. Characterized by the typical tower homes in varying pastel shades, the town is one of the largest and it was this reason which almost kept it out of the “Cinque Terre." It is now considered a part of the UNESCO World Heritage Sites and makes up part of a national park. Having inspired artist and poets from all over, perhaps the most famous is Eugenio Montale, who won the Nobel Prize for Literature in 1975 at Villa Montale. 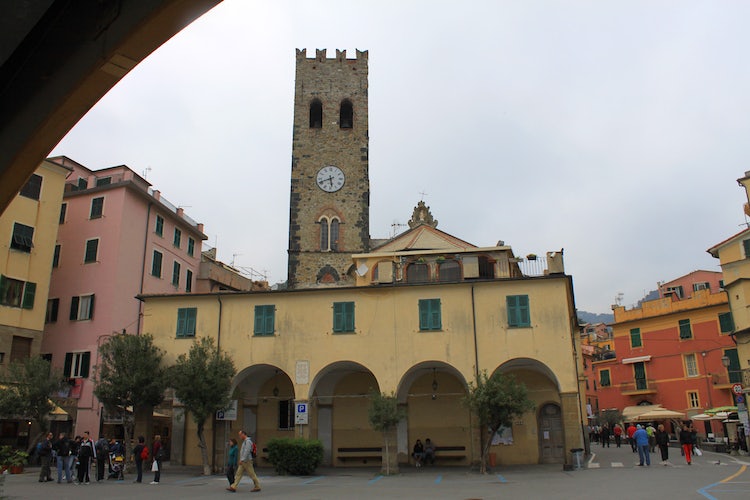 Of course the beaches are a big attraction at Monterosso, however there are many opportunities to see new and old monuments that testify to its long and rich history. Down by the beach, in the city center or hiking way above the town will have you explore many picturesque views and special places.

Church of St. John the Baptist

The Ligurian style façade made from marble extracted from the Punta Masco quarries is comprised of four columns with a central rosette window. The medieval bell tower, once a watch tower is topped with a Merlon pattern.

Neptune emerging from the stone at the far end of the Fegina beach, this massive statue has become the symbol of Monterosso. Made by the Jewish sculptor and architect Levacher Minerbi in 1910 from concrete and iron, the giant 14-metre statue has suffered the passage of time, the elements and war, having lost both arms, his trident and a giant seashell 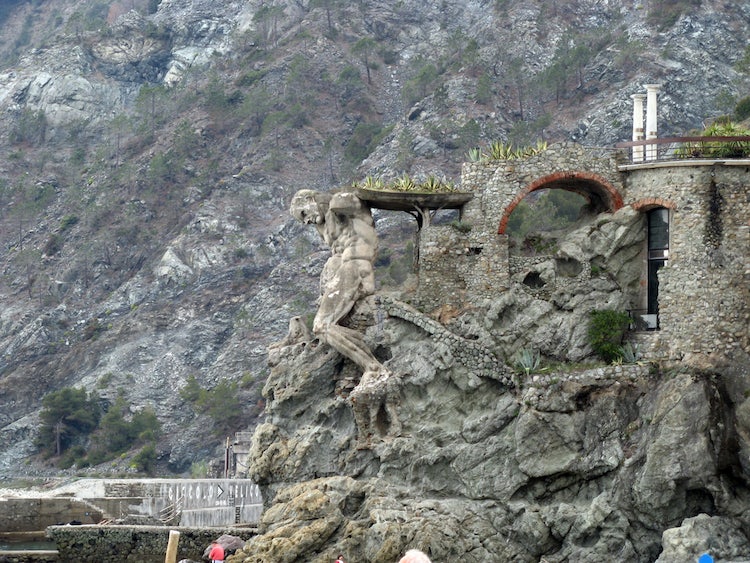 Represents what what is left of the many watch towers that guarded Monterosso and the surround area from the 14th century along with another two, the bell tower of the church and the tower next to the above mentioned “Giant."

After an arduous climb of trails and steps, one enters into a shady little corner where the Sanctuary Soviore is built, over 450 meters above sea level. The location is revealed in a “legend" of a local priest who saw a dove enter a small opening in a wall, his curiosity made him dig to see where it went. It was here that he found the Soviore Madonna, a wooden statue of the Virgin and Christ.

The building was begun in 1619 and the entrance is dated 28 March 1622. According to napoleonic law in 1810 the convent was confiscated and became a military base before being permanent convert to a convent in 1816. There is a Crocifissione attributed to Antoon Van Dyck.

Built on the ruins of the first traces of Monterosso from the year 629, the “castrum" is all that remains of the early settlement that fled in in the wake of the invasion of Rothari, king of the Lombards from 636 to 652. 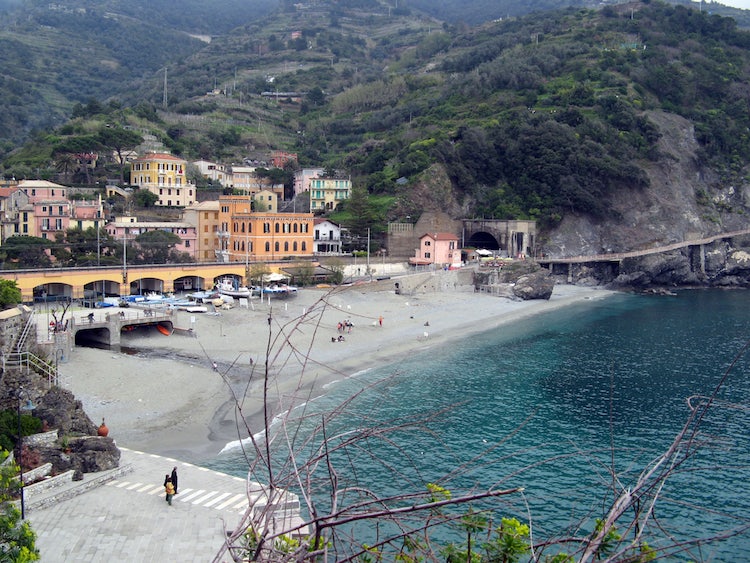 It was the sandy beaches and crystal clear waters that first opened Monterosso al Mare to tourist from all over, and this didn't happen until after the railroad was able to penetrate this completely isolated town. You can plan your holidays with a bit of sun at one of these two beaches at Monterosso. Fegina beach easy to find, located directly at the exit from the train station. Large and sandy beach, perfect for families with kids. The second beach is approximately a 5 minute walk from the train station, about 600 meters from the town center, hidden behind a rock wall. 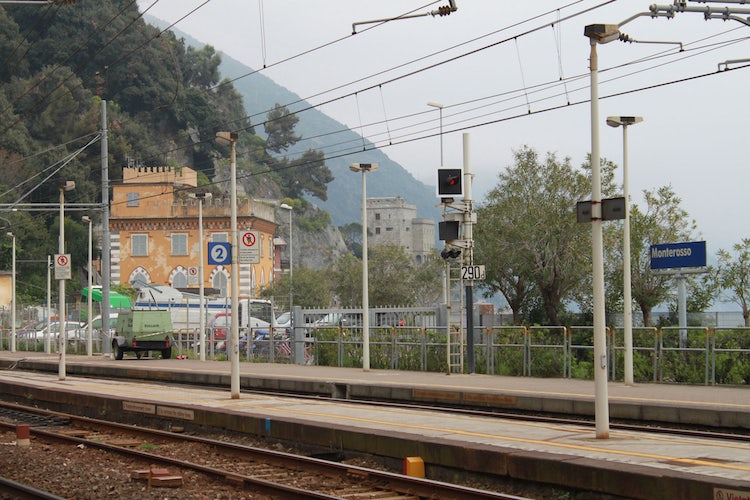 You can arrive by car if you have based your holidays in Tuscany or close to La Spezia, even if it is highly discouraged due to limited parking. Take A12/E80 to the exit toward Carrodano/Levanto/Brugnato and from here, turn left onto SS566 (Dir/SS566dir) following signs for Levanto/Bonassola/Monterosso. Choose your parking lot according to where you think you will spend the most time. Parking Loreto (old side) is perfect for those who need to get to the historical center of the town whereas Parking Fegina (new side) is only open from March to October. There is an automatic system for paying parking and it is open all day (and night)

The best way to get to Monterosso is by taking the train from La Spezia or from Levanto. For more information about getting around in Cinque Terre read our article. From Monterosso you can head south to visit Vernazza or you can head north to visit Levanto for more beaches.