Heading into the Magical Coastal Towns

This magical passageway is actually an unexpected result after the train tunnel connecting the five towns to the rest of Italy was built. Using the trails and depositories that were created to hold the material for the railway, the locals created a path which substituted a difficult mule trail. The name “the road of love” pretty much speaks for itself. ;-)

Here's the bad news: the trail is unfortunately closed. A section of the cliff right above the trail is loose and dangerous! The re-opening is expected for 2021. (updated April 4, 2018)

The first of the five towns to be reached from La Spezia will leave you yearning to see the others, each with its own particular quirk and history.

Protected from mass tourism for years, much of its natural habitat has been preserved, and since its acceptance as a world heritage site, it is sure to live on for generations - with minimum changes.

The beauty of the Cinque Terre was not always appreciated, not even by the locals, due to its isolated and hidden position.

It wasn’t until 1874 that a train tunnel was built through the mountains and connected first all five towns to each other and then to the rest of Italy.

However, even in the early 1800’s, the Florentine painter Telemaco Signorini found the picturesque streets of Riomaggiore to be of great inspiration.

He was a member of the famous Macchiaioli group who broke from tradition and did much of their painting outdoors to capture natural light, shade, and colour. 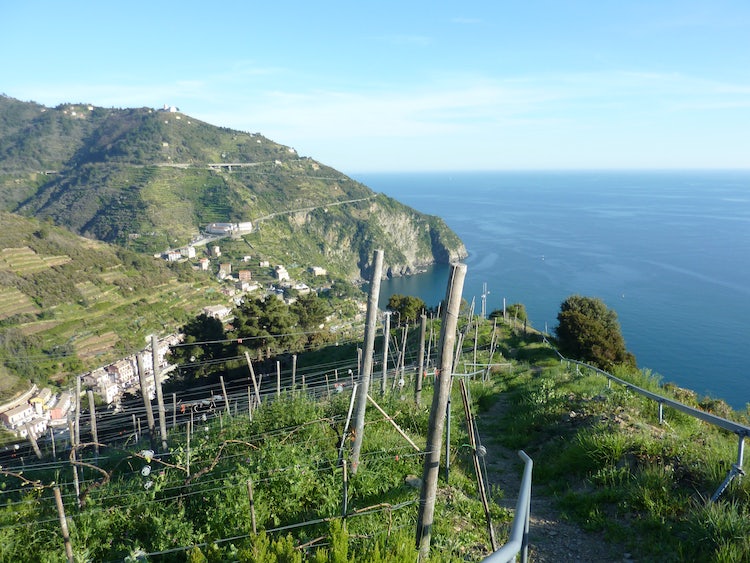 Many of his paintings from the late 1800’s already start to feature what would soon become one of the most famous tourist destinations in Liguria, using the the play of light filtering in the quaint little streets, narrow passageways, numerous steps and hidden corners.

The tower-like homes, built along the rocky waters edge, were accustomed to the constant and destructive invasions from the “saracen”. In order to protect themselves from these raids, most all the homes built in the 1500’s included a front entrance onto the road and another behind the house as an escape route. 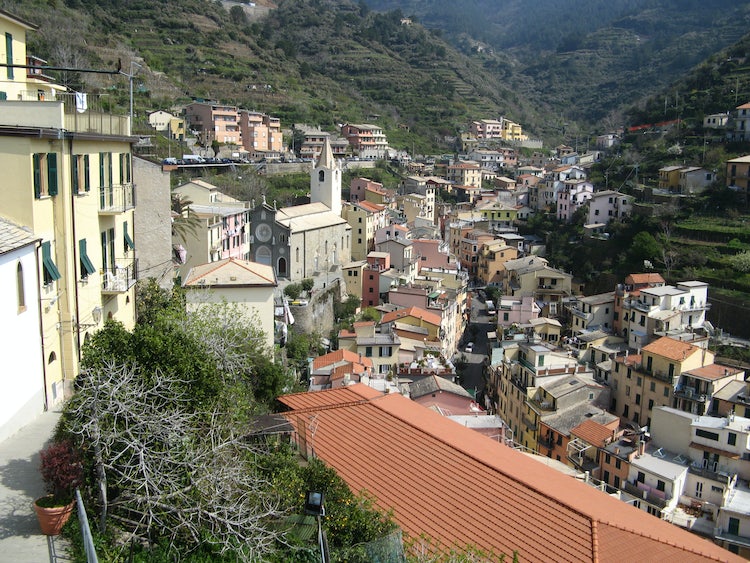 Perhaps one of the more pleasant, stress-free and panoramic ways to visit the coast is to use one of the regular ferry-boat services connecting La Spezia with the Cinque Terre. Even if your trip does not start in La Spezia you can pick up a ferry from Lerici, Portovenere, Levanto, Viareggio, Forte dei Marmi and other towns of Versilia.

With a little bit of time on your hands, there is much to visit in Riomaggiore, including restaurants, beaches, cafes and panoramic points.

592 1 Riomaggiore - Manarola This stretch is known as "Via dell'Amore" and unfortunately it is closed, probably until 2019. If you're feeling adventurous, there is another steep path that goes up the mountain that overlooks the Via dell'Amore and reach Manarola in this way. There are a lot of steps, the trail takes about an hour to do and passes through some terraced vineyards. It is actually quite pretty so if you feel like hiking, we recommend you try it!

The Castle provides a magnificent view of the town below. Built in the 1200’s as protection from the constant raids by pirates, it consists of two towers and a wall connecting them. It was constructed in 1260 by the marquises Turcotti and was completed by the Genoese in the 15th/16th century after the dominion of Fieschi family. In the 1800’s with the arrival of Napoleon and the belief that the dead should not be buried within the town walls, it was reutilized to serve as a cemetery. Now used as an educational center, you can make the steep walk up the hillside behind the San Giovanni Battista church to enjoy the views.

The Sanctuary of our Lady of Montenero

Even though tradition tells us that this building dates further back than the 8th century, the first "official" mention of it is in 1335. According to the legend, a Byzantine icon was hidden in the church to protect it from the invasion of the Longobards. In the very place where there was rediscovery of the icon, a source or water gushed forth and it was decided that this is where the church was to be built. 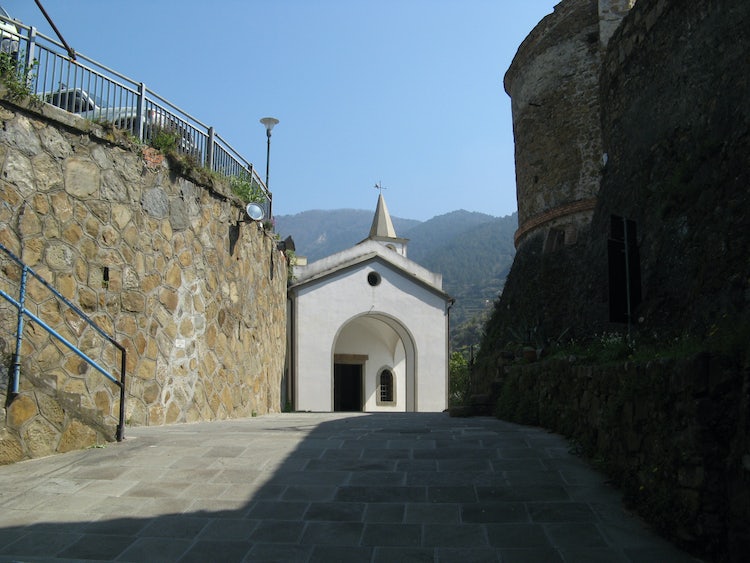 The Church of San Giovanni Battista

Located in the upper part of the town of Riomaggiore you will find the church named for the town's patron saint, St. John the Baptist. Constructed in 1340 using a “basilica” type floor plan, you will find three aisles instead of two. There are several beautiful pillars within, ogival arches, two Gothic doors and a 14th century rose window as well as some works of art like the wooden crucifix of the Maragliano, a triptych in the right aisle attributed to the Antelami and the "Baptist's Preaching" attributed to Domenico Fiasella.

The Oratory of San Rocco

Located next to the castle, built on the hill of Cerricò in 1480 to give thanks after the town escaped the scourge of the Plague.

There are another two oratories in this small town: Santa Maria Assunta from the 1500’s and the oratory of Sant’Antonio Abate.

Below what the locals call the “Batteria” (also known as the Torre Guardiola which serves as an observation center for the natural habitat around Riomaggiore) sits the southernmost beach in Cinque Terre. Located east of the village, you will go through a long tunnel after the train station. At the end of the tunnel just follow the road that heads away from the town center to find the rocks bordering along the coast - and you will find the beach.

There is also the Canneto Beach with its natural waterfall, nestled between Punta Castagna and Punta del Cavo; however, it is only accessible by sea and a boat rental. 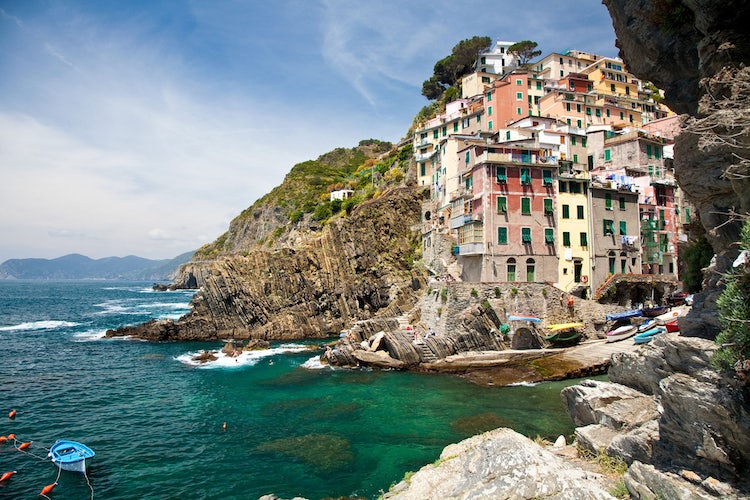 Riomaggiore makes up its own governing municipality which then encompasses the following towns: 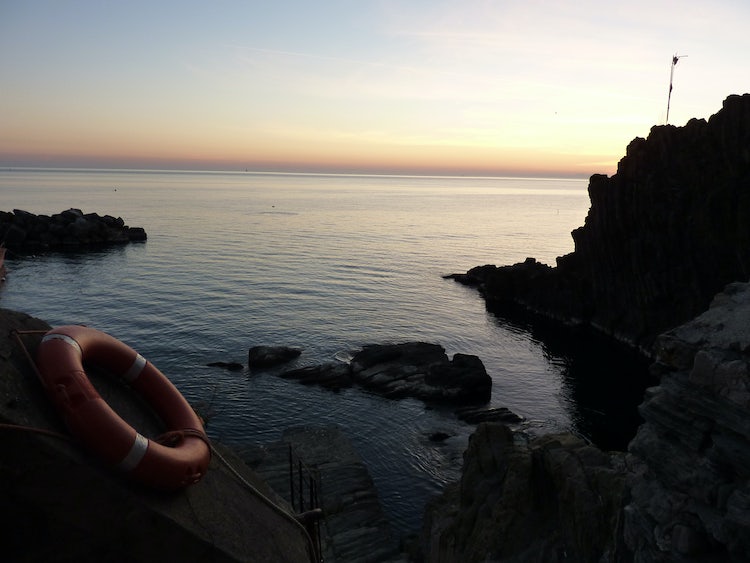 You can arrive by car if you have based your holidays in Tuscany or close to La Spezia, even if it is highly discouraged due to limited parking. Take the A12 and exit at Santo Stefano di Magra in direction La Spezia. From La Spezia exit, follow the signs to La Spezia, Cinque Terre, Riomaggiore, Portovenere (attention: do not take the road to Lerici, it is beautiful but not the same thing). Cross the city close to the harbour, take the road in direction Portovenere, Riomaggiore. Follow the signs only to Riomaggiore. After a tunnel, the road becomes very panoramic. There is a paid parking lot, though be advised there is not a lot of space. For additional parking, you can also try another parking lot a little further down (300 metres). About 2 Km from town, in the direction Manarola, there is a free car park and public transportation to take you back to town.

The best way to get to Riomaggiore is by taking the train from La Spezia (10 minute ride) or from Levanto. Read getting around in Cinque Terre for more information.

** A public restroom can be found right around the corner of the station by the tracks.