an underground treasure in the Park of the Apuan Alps

The Garfagnana is a land rich in natural treasures. Her woods and mountains surround us as we arrive and their sight accompanies us wherever we go. Other treasures are however hidden at the top of a mountain or maybe even within its interior, like the Grotta del Vento, a beautiful system of caves and grottoes that wind underneath the Pania Secca where several tours have been set up.

To get to the grotto, you first have to reach Gallicano and from there continue on the mountain road that goes to the small village of Fornovalasco. From Gallicano, you'll see many clear signs towards the grotto so it should not be difficult to get there. The road, however, becomes narrow and curves around rocky outcrops and, for anyone not used to driving on narrow mountain roads (and I'm not!), the drive can be a bit stressful. There is a large parking lot near the entrance to the cave but it is not free: if you have any remaining time on your parking ticket, it can be used in any other parking area within the Vergemoli commune.

Near the entrance to the cave, you'll find a fresh water fountain, heaven-sent when the weather is hot and dry. 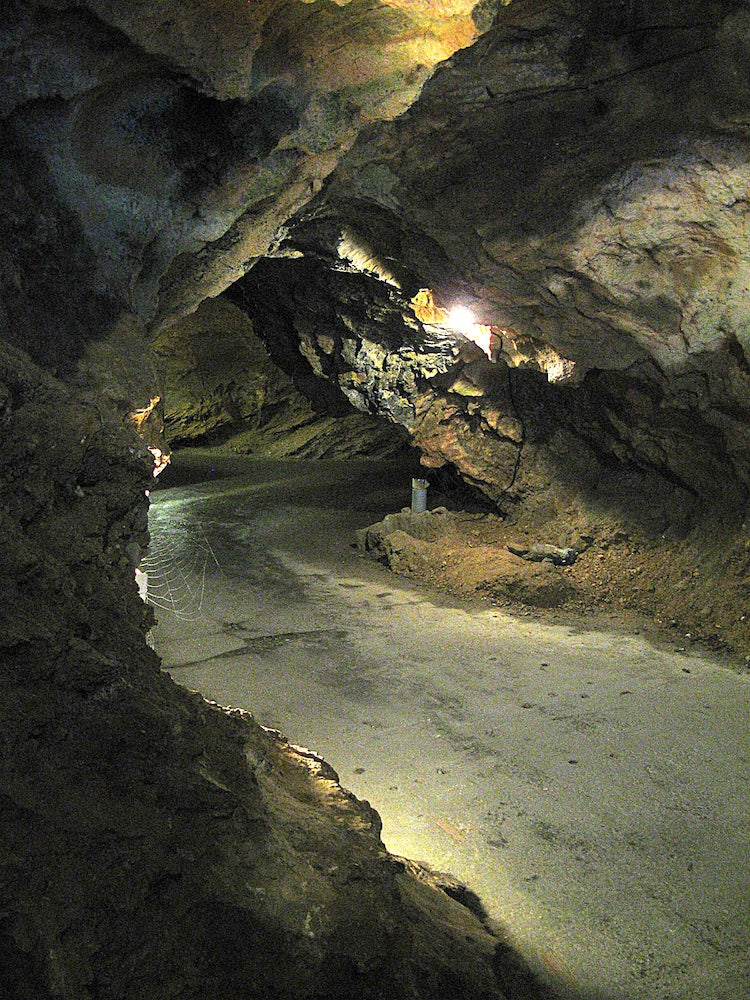 The grotto can be visited in 3 itineraries that vary by length and time, from an hour to 2 hours and all in the company of a tour guide. It is also possible to visit the cave following all three itineraries for a tour of 3 hours or the first and third which lasts 2 hours. Each guided tour starts at a precise schedule with guides that speak English, German and, naturally, Italian. Generally, you don't need to make reservations, but it is recommended that you do so during the summer season, if you are a large group or if your visit falls on a national holiday.

The temperature inside the grotto is extraordinarily constant at 10.7°C (50°F) even during the hot summer months. For this reason, even in July you need a sweater while inside the cavern. We also recommend wearing appropriate hiking shoes since you'll walk a few kilometers in an environment where there is 100% humidity, climbing over 700 stairs.

On our visit (July 2008), we selected the second itinerary that lasts 2 hours.

The entrance into the cave is at large opening on the side of the mountain but, up until the end of the 1800s, it was no more than a small hole from which cold air flowed out. At that time, local residents built a small hut around the hole and used it as a naturalrefrigerator. It was only during the course of the last century that the hole was widened little by little to allow the exploration of the tunnels. 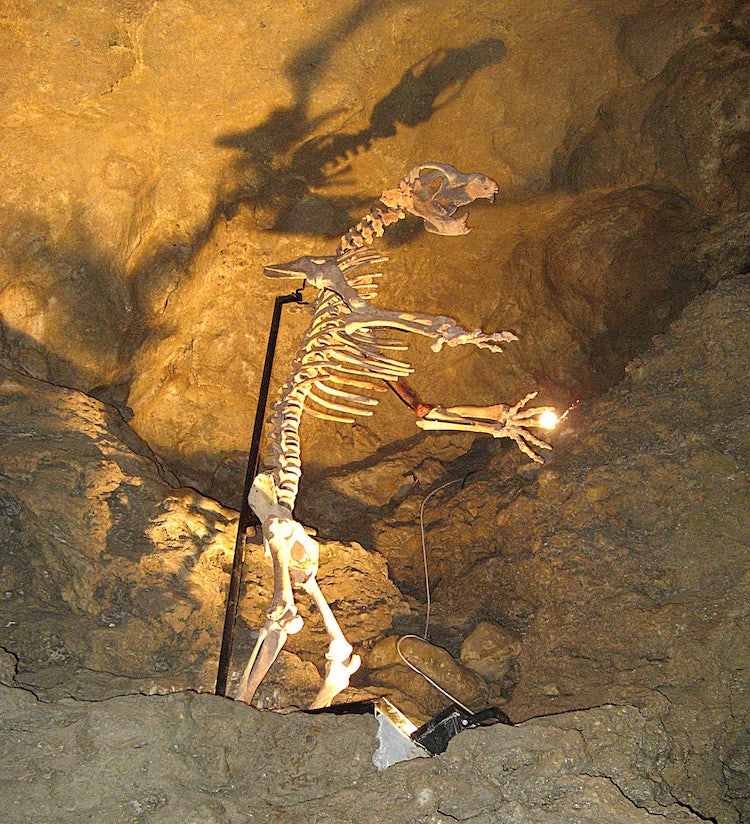 Near the entrance, the tunnel opens into a large cavern called the Bear Hall, where you can already start to feel the difference in the air, a bit cooler and more humid. In this area you'll find a glass case displaying a few bone fragments of a cave bear that likely lived in the grotto over 8,000 years ago. These were discovered in the rubble and mud that was cleared from the cavern.

From here a large, armored door separates us from the rest of the grotto and as our guide opens it, we are assailed by a strong, cold wind that gives the grotto its name and which we liken to the mountain's own breath!

The grotto has two openings, the one from which we enter is at about 642 meters above sea level, and the second is at the top of the mountain, above 1,400 m.s.l. and is not accessible.

As we proceed through the metal door we pass through narrow tunnels to enter into large halls carved in the rock by water passing through the mountain that once fell on top as rain or snow. The sight we find ourselves immersed in is truly striking. The rocks in front and all around us are covered in beautiful white decorations and formations, a natural cathedral. Their appearance is somewhere in between marble, ice and wax. They can be seen in various tones of yellow and orange. From the ground rise stalagmites which look like large white teeth, while from the ceiling, the hanging stalactites continue to drip small droplets of water. These concretions will eventually join to form majestic columns, and entire stone walls are enriched by elaborate patterns as the water slides over them to creates new shapes. Where the water has taken particular routes, beautiful semi-transparent sheets have been shaped to resemble the folds of majestic curtains. 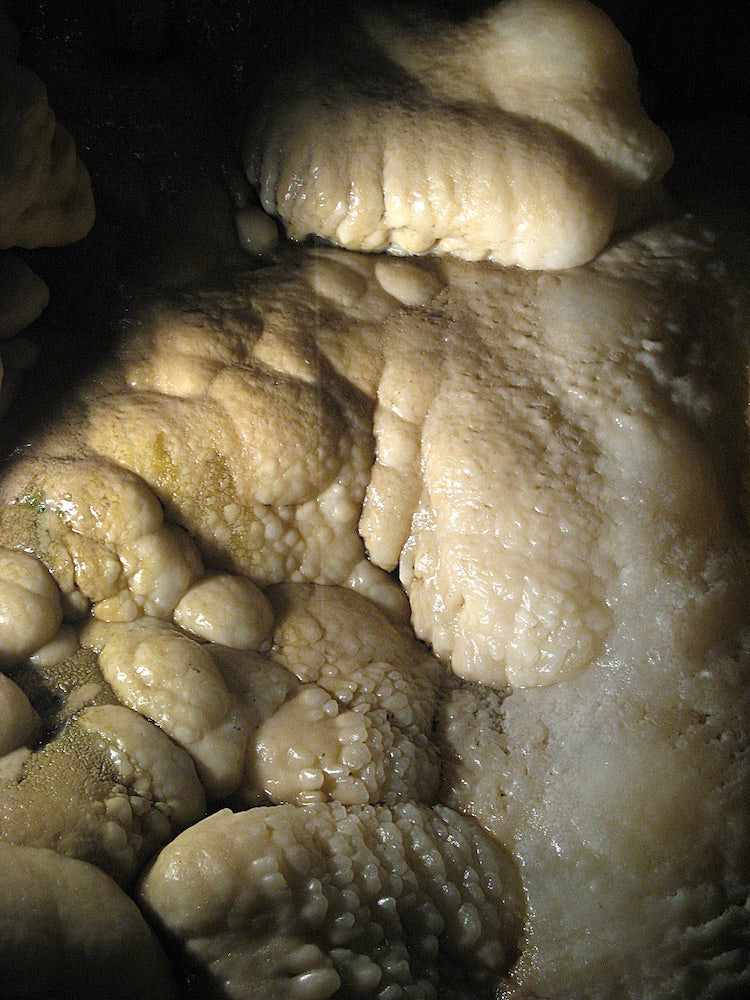 These sculptures are "alive" and shiny due to the water that covers them and that continues to make them grow albeit at a really slow pace. The few shapes that are dead, abandoned by streams of water that changed course, no longer grow, are opaque and destined to crumble. For this reason, if anyone were to cut away these beautiful formations (as happened in the past before the grotto was protected) they would immediately lose their bright sheen. That many of the mineral formations are still alive and rich in color is one of the main attractions of the Wind Cave. The concretions, along with the current of air inside the cave, gives one the impression of having entered an enormous organism: at mountain that lives and breathes!

The Wind Cave has Karst origins. The water from rain and snowfall penetrated the mountain as it headed towards the valley. Being rich in carbon dioxide and thus acidic, it slowly melted the calcareous rock, giving birth to a large number of small tunnels that eventually meet up to form an underground river that then flows outside. The river through the millenniums deepened its path, leaving the superficial ways open. The grottoes that we explore today are thus the underground river's old path that at one time exited through the entrance to the grotto.

The path covered by the first itinerary is mostly flat and comfortable and the tour proceeds slowly with a lot of stops at which time it is possible to take photographs, even with the use of a flash. The second itinerary continues on where the first one ends, going down over 50 meters following a winding staircase down the Giants' Chasm - absolutely safe with handrails along the side.

When the water of the subterranean river abandoned the caverns about 20,000 years ago, the rock walls started seeing the first signs of calcite concretions. The beautiful sculptures we admire today are the result of a slow deposit of calcium carbonate (in the form of calcite crystals) brought here by the water that filters through the walls after "melting" the mountain rock. Over 1000 years are necessary for these formations to grow just one centimeter! These masterpieces are very fragile and a simple touch of a hand can ruin nature's work and stop the growth, as well as dirty them with black spots caused by the acidic fats our skin releases. For this reason, before we entered the cave our guide requested that no one touch the walls.

Continuing on the Second Part of the Itinerary

The first itinerary ends at the edge of the Baratro dei giganti, or the Giants' Chasm and from here the second itinerary continues on down into the large tunnel that falls for 50 meters. We follow down the chasm along the set of steps with handrails curved along its walls. The underground river came out through here on its way out of the cave. Even today, during exceptional flood periods (the last one was in 1996), the river returns to this tunnel. Water has thus not completely abandoned this area and thus impedes the growth of concretions in this sector of the cave. We are also quite deep into the cave and the water that reaches this area is by then poor in minerals. It no longer conducts much electricity - you will see several small ponds of water with light bulbs underneath the water that do not even need to be sealed off! The lights produce an interesting effect on the crystals in the water, making the sand and water seem to be milky white. The air is saturated with humidity and the water droplets capture all particles that arrive down here, making the air very pure. For this reason, the grotto was the set of speleotherapy conducted on children with asthma with excellent results.

At the end of the chasm, in what is called the Room of the Voices, our guide lets us experience absolute darkness: the lights are turned off and we remain in silence as the dark envelopes us. Thus, we can begin to understand what speleologists that explored the cave in the past experienced and that took days just to reach the spot where we are. This area was the base camp from which many explorations took off, and the continuous drops of water in the darkness gave whoever remained at the camp the impression of hearing voices in the distance. 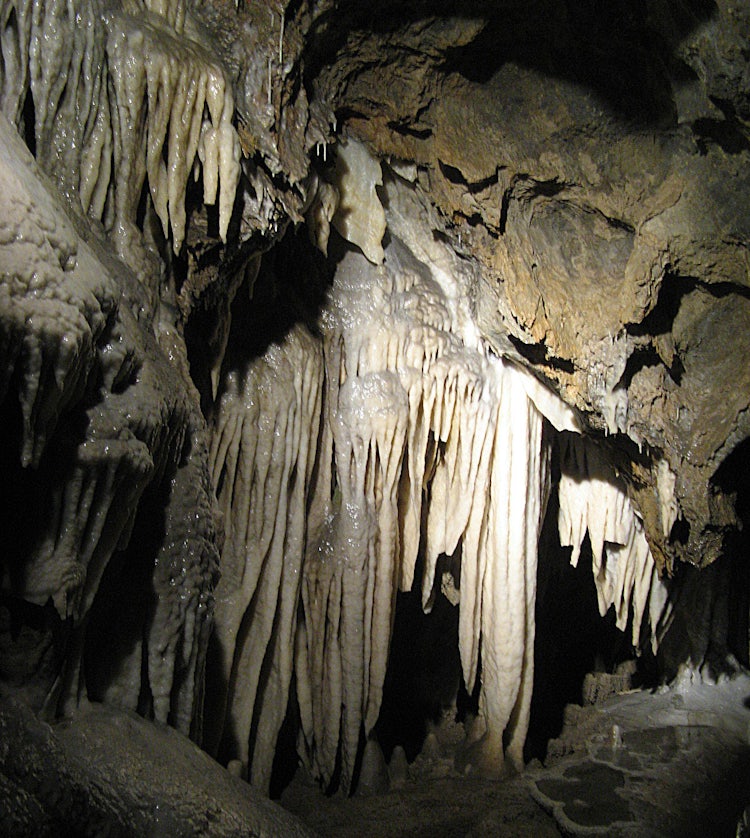 The exploration of the grotto by speleology groups of the CAI associations from Florence, Bologna, Lucca and other cities began in the 1960's. Soon thereafter the three itineraries were set up along the cavern and, even if it introduced foreign elements such as stairs, handrails and cement walkways, these trails have allowed all of us non-speleologists the possibility to admire its incredible beauty. A fourth itinerary, a caving/spelunking tour, is in preparation for those who want to explore an area of the cave in hard hats and with flashlights!

At the end of the itinerary, we reach the point where the underground river, the Acheronte, passes nearby and which ends in a siphon a little beyond the point where we can reach. The frequent floods continuously bring debris to this area and prevent us from continuing on. What we do know is that only a small part of the caverns have been explored thus far, so the work of the speleologists still slowly continues on. 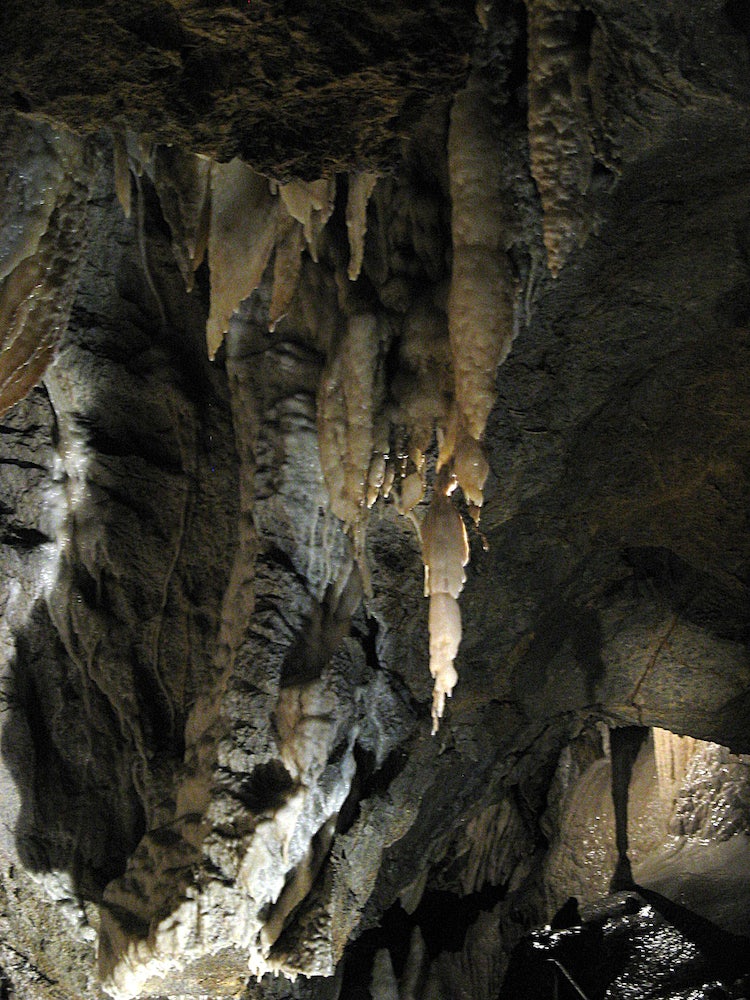 From here we head back towards the entrance, ending our visit and we thank our guide for the interesting information on the cavern, its history, and formations. Back at the ticket office we see that there is also a coffee bar, restrooms and a souvenir store which offers several books on the grotto, as well as many mineral samples from across the world, among these beautiful geodes.

The time inside the grotto passed quickly and two hours flew by. The next time we come back, which we hope will be soon, we'll try to arrive earlier in the day to complete the 3 hour tour!

All three itineraries are open every day from 1st April to 1st November, 26th December till 6th January and on Sundays and public holidays