Monte Forato is one of the most common destinations in the Apuan Alps because of the suggestive natural arch that joins two twin peaks and creates a hole that can be seen from Garfagnana and Versilia.The start of this ring itinerary is in the small mountain village of Fornovolasco and follows the Turrite stream in a continuous climb up to the Foce di Petrociana pass. A short steep climb brings you to the crest which you follow to reach the great stone arch of Monte Forato. Continuing along the crest we reach another pass and head back down towards Fornovolasco. 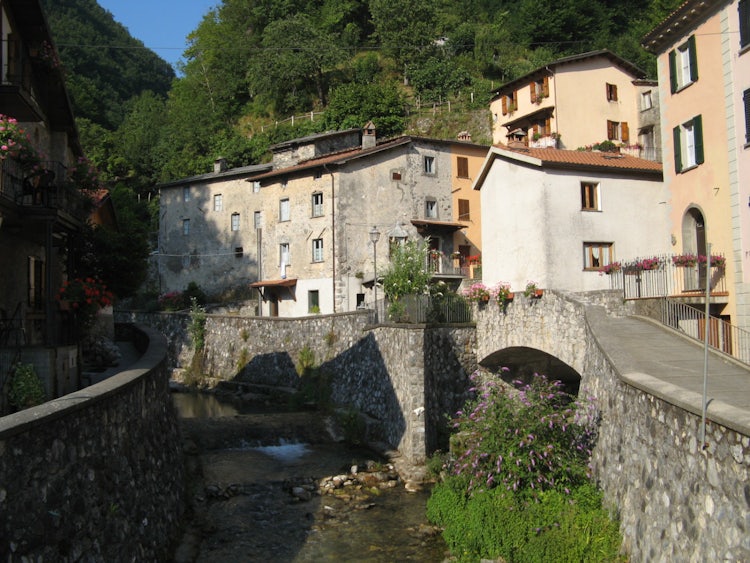 The hike is moderate-demanding in difficulty since it includes a dislevel of about 800 meters. If you decide to follow the crest as we did, a few parts of the trail are quite easy to find while a few others aren't well marked. A few meters of the trail require using the aid of a metal cord along the side of a rock but this was just 2 or 3 meters. You have to make sure to have appropriate shoes, better if they are hiking boots. We recommend dedicating an entire day to this outing. One of the variants for the itinerary (CAI trail 131 intead of 110) passes below the crest of the mountain before reaching Monte Forato reducing part of the climb making the route a bit easier. 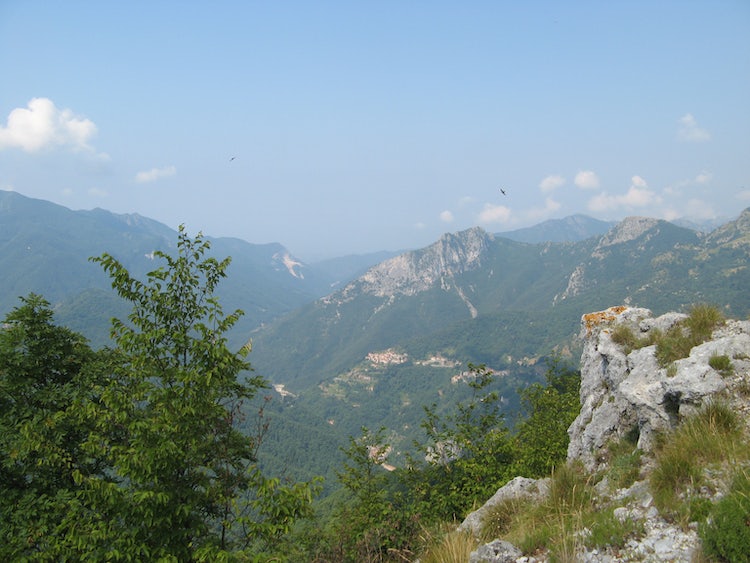 THE LEGEND OF MONTE FORATO

One of the many legends heard in Garfagnana regards the origin of the hole in the mountain. Legend has it that it was caused during a tremendous clash between Saint Pellegrino and the Devil himself.

The Devil, tired of seeing the saint prey and sing all day, sought to tempt him while he was making a beech wood cross, but it was all in vain. Irritated, the Devil slapped the saint so hard he was knocked down. San Pellegrino slowly got back up and also tired of the continuous torments he was made to endure, instead of turning the other cheek slapped the Devil right back so hard he was hurled against the crest of the mountain. The Devil hit the mountain with his head, the terrible impact created the hole that we can see today.

We did the hike in July 2008, leaving our car in the parking area you find as soon as you arrive into Fornovalasco. To find the trailhead, pass in front of the La Buca lodge (called rifugio in Italian) and cross the bridge over the Turrite stream. Right after the bridge you'll find a water fountain where we filled up our water bottles. From here, clear CAI markings (red and white lines one on top of each other) indicate the various trails you can follow - we started by taking trail CAI 6. 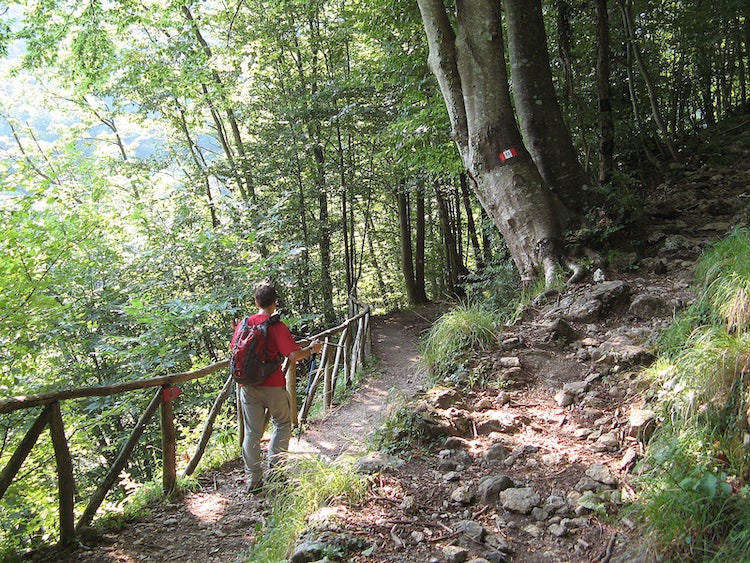 The path soon crosses the paved road that takes one towards the Wind Cave - you cross and enter the woods again following the trail towards the Foce di Petrosciana. The only difficulty along this part is the climb; the path is well marked. 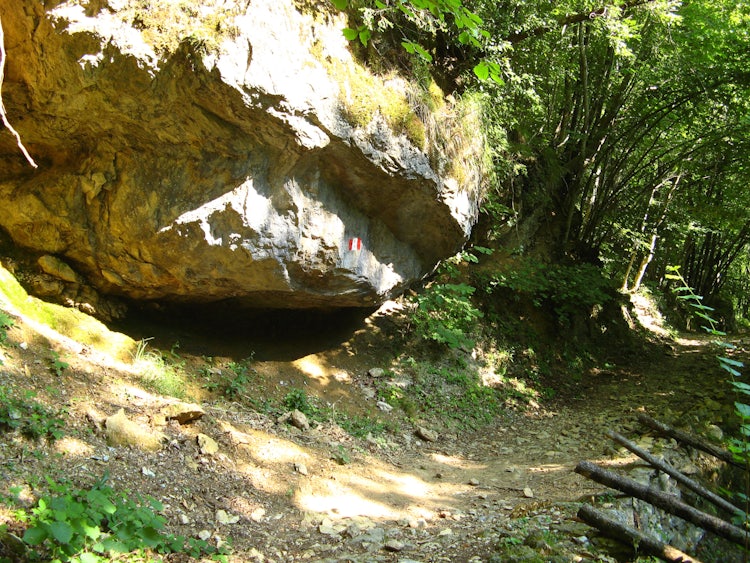 Soon the path brings you to the "Tana che urla", or "lair that screams", a grotto known for centuries but which can only be explored by speleologists. You can in any case walk to the entrance and here from here the underground river that makes the cave "scream" :). Due to the sound the water makes, ancient local folklore said this was the entrance to Hell and the noise were the screams of damned spirits! 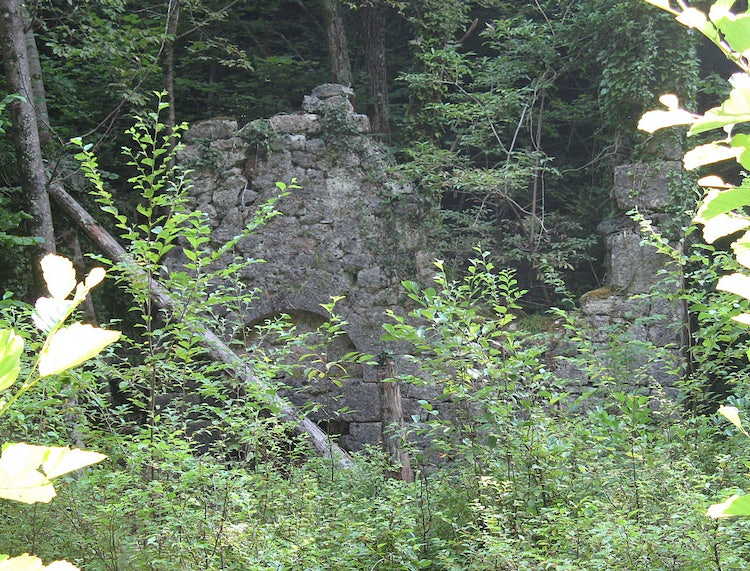 Continuing along the path we pass by the remains of an old watermill and right after that the remains of an old Medieval church, called "Chiesaccia". Located at the source of the Turrite stream, the ancient building was a "Hospitale" during the Middle Ages, a place where pilgrims could stop in the Garfagnana traveling towards the sea. 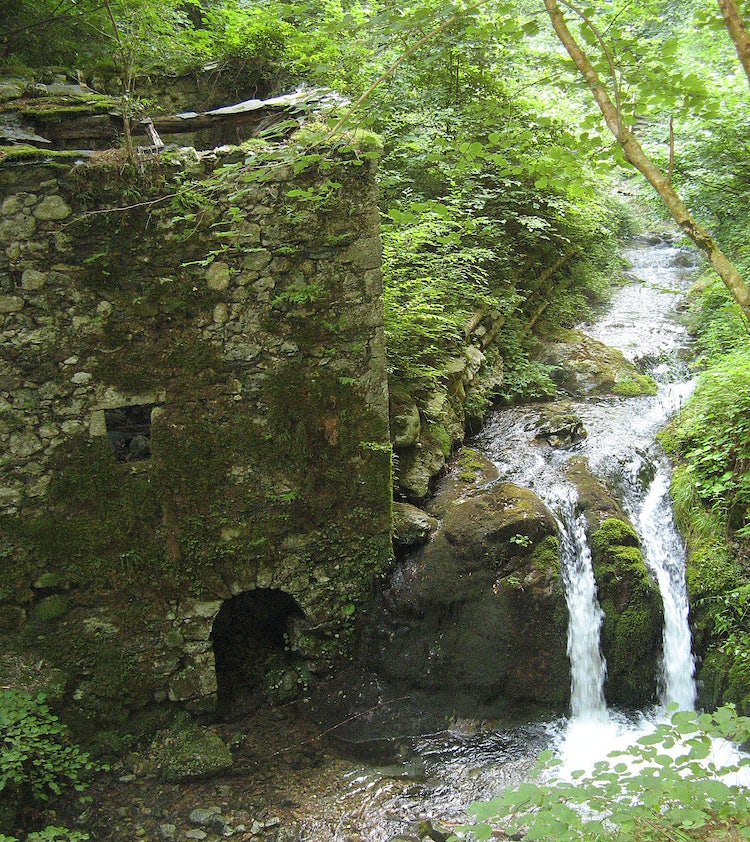 At an altitude of 961 meters and about 4 km we reach the Foce di Petrosciana pass: various paths meet up here and we follow the one marked 110 that goes up along the creat towards Monte Forato. It is a bit more difficult than the CAI 131 (a few parts feature both sides exposed, a very short stretch where it is necessary to aid oneself with a metal cable attached to a rock and a few stretches after the arch that are hard to find). 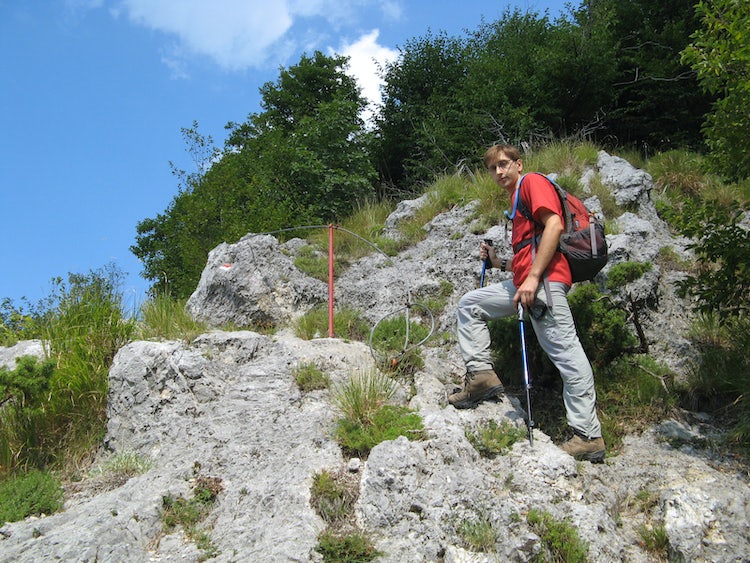 The alternative from the Foce di Petrosciana is to follow trail CAI 131 that runs below the crest and is a little less steep in general. After 15 minutes we found the start of the "via ferrata", an alternative way to reach Monte Forato but which requires climbing experience to use the vertical metal stairs and which we don't have. We therefore continue along the 110 as we were doing. 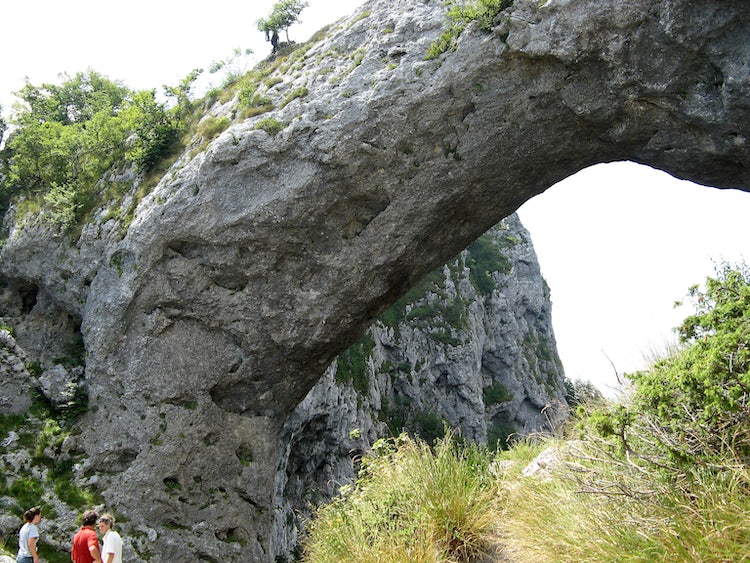 The Monte Forato, or "pierched mountain" is in reality two twin peaks, one 1223 meters high and the second 1209 meters high. The hole in the mountain is caused by the large, natural stone arch that connects the two peaks. The path brings us exactly to below the arch which is at at 1160 meters.

The arch of the Monte Forato is one of the main natural stone arches found in Italy. Formed through the erosion of the mountain's calcarous material by water and wind, the arch spans 32 meters and is 25 meters high. The arch's rock is about 8 meters wide and 12 meters high, once you're underneath it you understand how big it is. From here you can already enjoy a wonderful view through the arch to the west, to the Tuscan coast of Versilia. 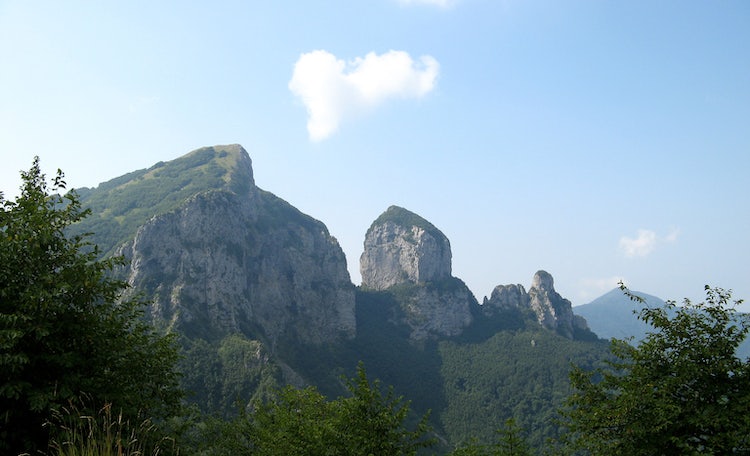 From the arch it is possible to follow a short path to reach the shorter of the two peaks where you'll find a cross and a terrific view in all directions.

Once you're ready to move on, you can decide between two different paths to complete your ring: you can shorten it by following the steeper path CAI 12 trail downhill which takes you back to CAI 6 and to Fornovalasco (see map) or you can continue along the crest as we did to reach the Foce di Valli (altitude 1266 m) which separates Monte Forato from Pania della Croce. 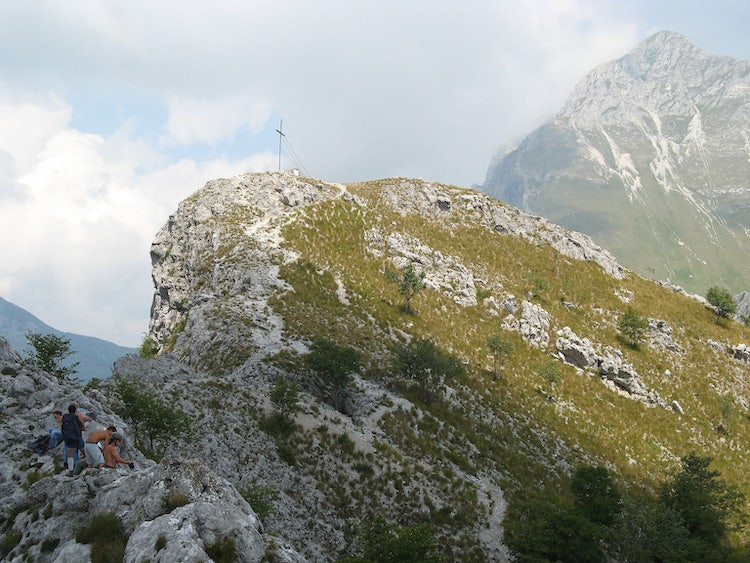 Always Remember to Check the Weather

and come prepared for all possibilities

Our experience, unfortunately, was to be caught in a thunderstorm a short time after we had left the arch. It rolled in so quickly out of the north there wasn't much to do but to plod forth, and this made it the most difficult part of our itinerary.

In better conditions, since you're following the crest the path is quite easy. You do have a steep drop to the western side, so you want to make sure to follow caution and make sure each step in well placed.

The rain had stopped by the time we reached the Foce di Valli but the sun was nowhere to be seen. The area looked beautiful, flat and green, almost all pasture land. Quite wet, we decided to not linger and continued to the right, down the mountain on CAI trail 130 towards Fornovalasco.

We highly recommend this hiking day trip on a beautiful day. It was challenging but the views were gorgeous. We hope ourselves to return soon to do this hike, checking the weather to make sure we avoid all thunder and lightening!

View some photos of Garfagnana! »

When to do it:
late spring, summer, early fall
Tips:
Without a doubt you need good hiking shoes, better if boots which will provide additional support. Plan to dedicate the whole day to this hike. The part along the crest is exposed, so you need to feel comfortable and maintain good equilibrium to stay safe.
Last time hiked:
July 2008

Review the 15 legs of the via Francigena in...

The 15 legs of the via Francigena in Tuscany are clearly marked for...

Walk around and to San Gimignano

Enjoy this hike along the white roads of the...

The Great Outdoors in Tuscany

The monastery complex & national forest reserves at Vallombrosa are...