are so much more than its wines

The area called Lunigiana, is situated in the furthermost northern corner of Tuscany, between Lucca,  Versilia and the region of Liguria.  In fact, it is practically bordering on the infamous Cinque Terre.

Read our article for a guide to creating your itinerary in the Lunigiana.

Where to Base Yourself in Lunigiana

Often overlooked by travelers, this area offers a flavorful itinerary that includes not just wines but also traditional culinary specialties that you will find only in this area using local ingredients such as chestnuts, honey and spontaenous herbs and leafy plants. 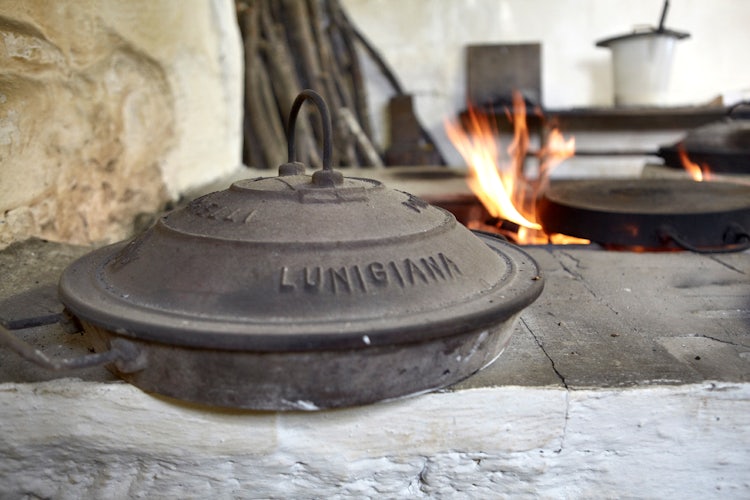 As in most cases, the recipes from the Lunigiana area, have been passed down through the years and the fundamentals of many of the recipes, find their origins in the extreme poverty that once existed in these areas. The lack of the basics often pushed the farmers to become creative, not only with the ingredients - using what was most abundant - but also in the stiles of preservation and cooking.

“Pane” or a variation thereof

It is virtually impossible to tour this area of Lunigiana and not find yourself in front of a menu option that doesn’t include at least one of the following below listed delicacies. The bases: flour, be it native grains, chestnut or corn, mixed with water and salt — seems ever so simple, right?

But, the final results vary — so much so, that the area of Lunigiana is famous throughout Italy for its "testaroli", "panigacci" and "focaccette". These types of breads are cooked in a “testi” or a flat terracotta or metal plate, varying in size, which is heated over a lively flame (instead of in an oven). 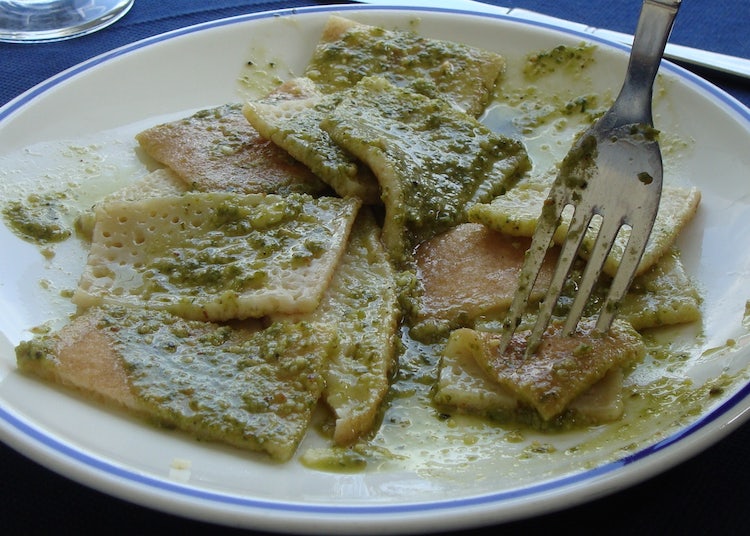 Here is a brief description of each:

Testarolo (Pontremoli) - to give you an idea, this product looks much like a large crepe, pancake or even a tortilla - but it is used in a totally unique way. The batter is a fluid mix of wheat flour, water and salt. It is poured onto a hot surface, many times in cast iron (though traditionally it was terracotta), and left to cook. To eat it: the pancake like result is cut into strips, boiled in salted water (much like pasta) and then traditionally served with a “poor man’s” version of pesto (parmesan cheese, basil leaves and olive oil).

Panigacci (Podenzana) - there maybe several similarities between the panigacci and testarolo but at the same time...no, there aren’t. (I know confusing right?)

The batter is a simple combination of flour, water and salt and the cooking procedure includes “testi” (like above).  But these testi are smaller and made exclusively from terracotta. The discs are heated, the batter is lathered on the disc, which is then covered with another disc and repeated until finished. The heat of the compressing terracotta plates cooks the bread which, is commonly served with cheese and cold cuts.

You can join the fun in August for a sagra celebrating this type of bread in Podenzana. 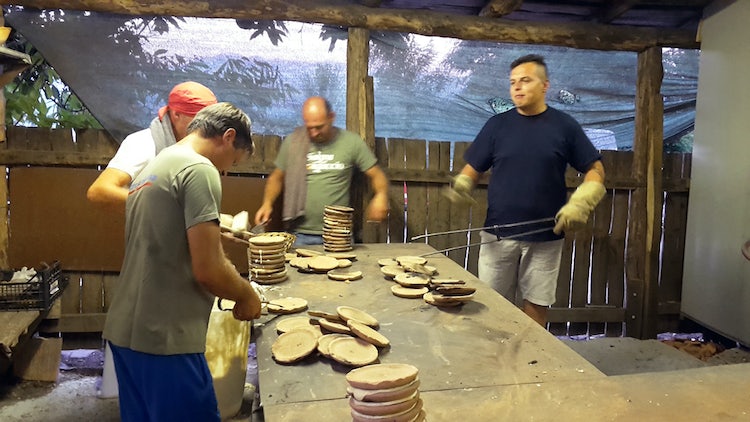 Focaccette - this speciality is almost a twin to the panigacci from Podenzana, however the variation is in the recipe which includes a bit of corn flour.

Grain is grown in the Valley

But, how about if you don’t live in the valley? Well the locals in Lunigiana thought about that and came up with a few variations that mix the native grains from the the lowlands with the abundant ingredients from the hills and mountains, namely chestnuts and sometimes potatoes. The area of Casola is noted for their special bread (which has been documented by the SlowFood organization):

Some have even referred to this bread as that of the bread of the Pelligrino (or the Pilgrim), as it was frequently offered to the travelers on the via Francigena. It was a type of bread that offered necessary calories to the pilgrim making the trek towards Rome and it was easy to conserve. 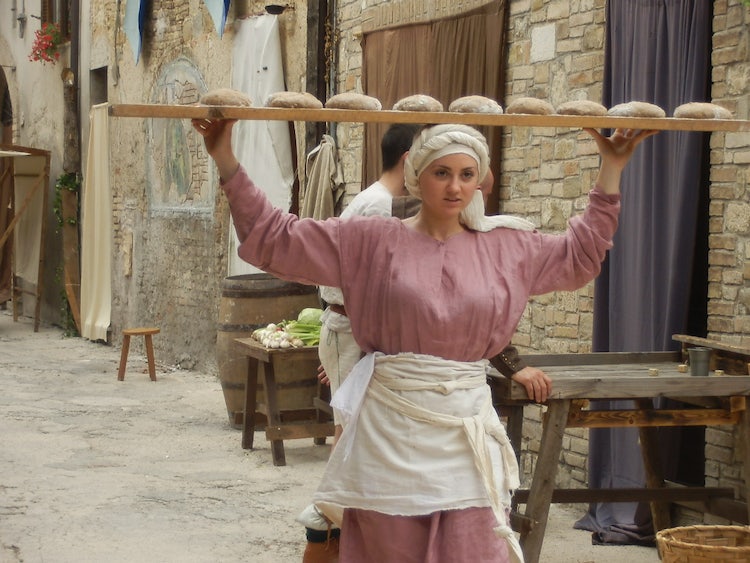 Another type of bread often simply called Marocca or Pane Marocca, grew from a time when wheat flour was rare and precious. The community at Montignoso depended on what was readily available: corn flour. The dough includes a mix of corn and wheat flour as well as yeast, which is then enriched with black olives, chopped chili peppers, garlic, extra virgin olive oil, sage and rosemary, and cooked in the wood-burning oven on chestnut leaves.

Even in today's society where everyone is watching there choloestrol, it would just be wrong in so many ways not to make a special mention of this particular dish.  Besides it is a much suggested companion to the above mentioned flat and yeast breads. Take note, it has also totally unique production process.

The production procedure is very strict, and the IGP regulations safeguard this product from being copied! Due to its high caloric value, the I.G.P. commission recognized the importance of this particular food in the diet of the "marble cutters" engaged daily in extracting the material from the Apuan Alps. Lugging rocks around consumes a lot  and this savour mix spread on bread gave the workers that extra energy. 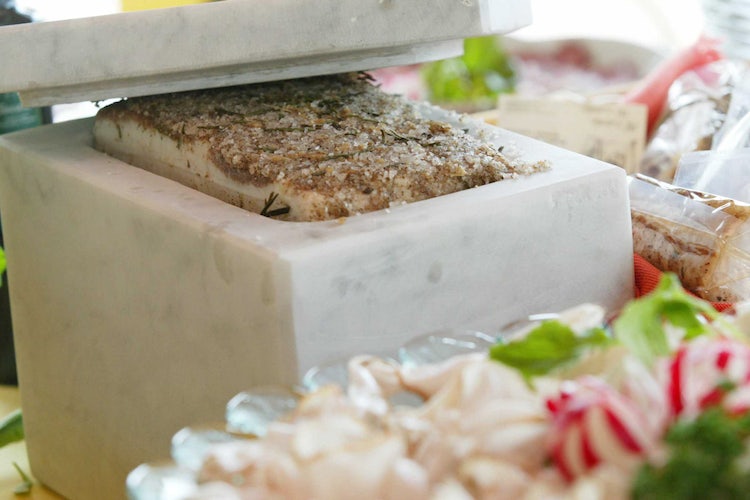 Made from pork belly fat (at least 3 cm thick), it is be sprinkled with sea salt, fresh rosemary and ground black pepper before placing the lard in a sealed marble container with a lid - called "conches" - which has been previously rubbed with cloves of garlic.

It is believed that the use of marble in preserving the lard had already been invented by the Romans or the Longobards.

The aging process must last no less than 6 months before the product can be packaged and sold. It is a combination of the microclimate in this area and the marble vat in which it ages that gives this product it's peculiarity.

It is normally served on a warm or toasted piece of bread, especially those types of bread listed above.  With this whisper of heat from the bread the lardo naturally begins to melt and the flavors of the spices becomes more noted. 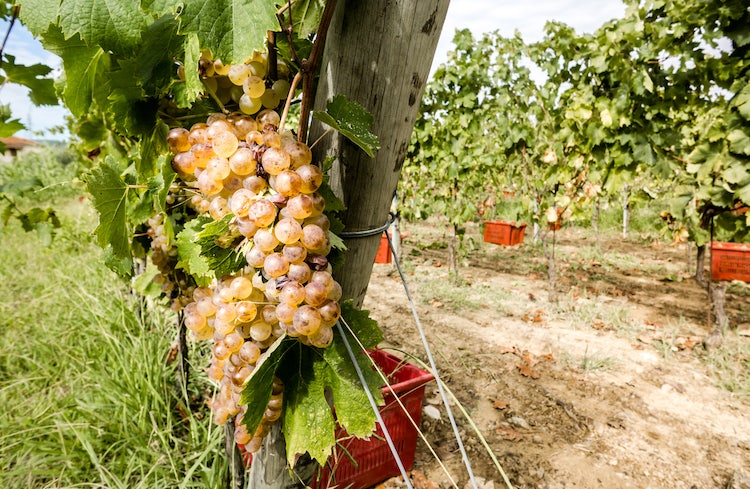 The Wines of the Area

You didn't think I would skip over the wines now, or did you?  This area boasts a rather peculiar position along the coast and the wines make use of the ocean winds and the reflection of the sun on the water to ripen the grapes and give them a special flavour.

Many of the wines production areas have fuzzy borders between the area of Lunigiana and Liguria, but below I have listed the areas in more detail. Briefly, there are three categories of wine, besides the typical IGT Toscana, directly tied to this area of Tuscany: Candia Hills, Luni Hills, and the valley of the river Magra starting near Pontremoli.

For over 2000 years, on the steep slopes of the Candia hills in the communes of Carrara, Massa and Montignoso, farmers have harvested grapes. It was back breaking labor with little in return due to the low yield of grapes and the natural limitation of cultivated areas. However, they overcame these odds and in the 1930’s at the Italian Wine Show, these wines were selected “among the best wines produced in Tuscany”.  It wasn't until January 27, 1981 that the inherent qualities of the wine from this area in the form of D.O.C. recognition were documented. A small and growing vineyard with Canida DOC wines is Azienda Agricola Cima.

Vermentino Bianco - white vermentino - with a minimum of 85% vermentino bianco grapes, results in a wine that may be dry or sweet and is always preferably, served chilled, excellent when paired with the local cuisine, perhaps fish or herb based. 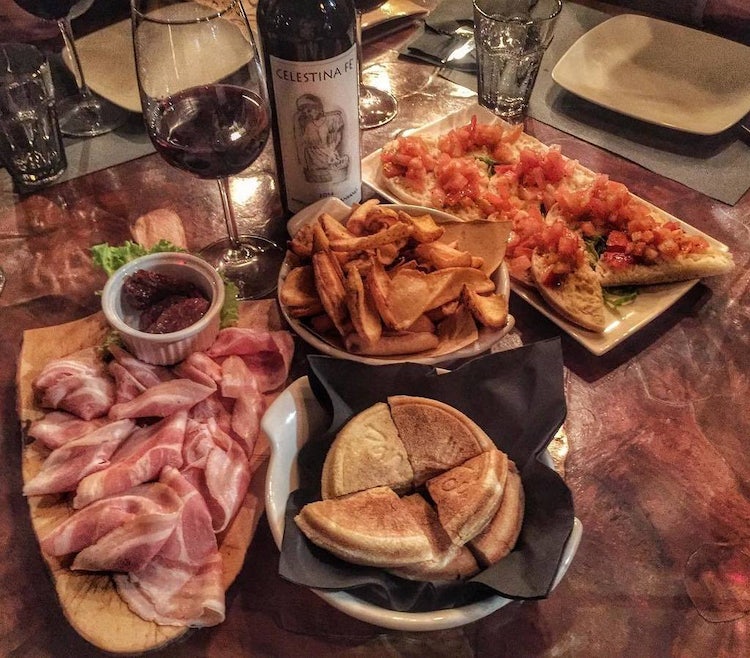 Grapevines have been growing on the gentle hills along the Magra River since the Etruscans. The terracing technique, which has remained almost the same for more than 2000 years, allowed the cultivation of these grapes in what would otherwise be a harsh reality. The production area comprises much of Liguria, precisely 14 communes in the province of La Spezia, and the several municipalities in Tuscany: for example Fosdinovo, Aulla and Podenzana in that of Massa Carrara. If you are curious to try them our, look forthe organic wines by Caboriassi.

The following DOC denominations include:

Bianco, or simply known as White Wine is a more complex blend of Vermentino grapes and the Tuscan Trebbiano grapes (as well as other local white varieties).

Rosso, and a Riserva as well is a more complex blend of Vermentino grapes and the Tuscan Trebbiano grapes (as well as other local red varieties).

La Albarola is made of 85% Albarola grapes and the remaining 15% of other local white grapes. 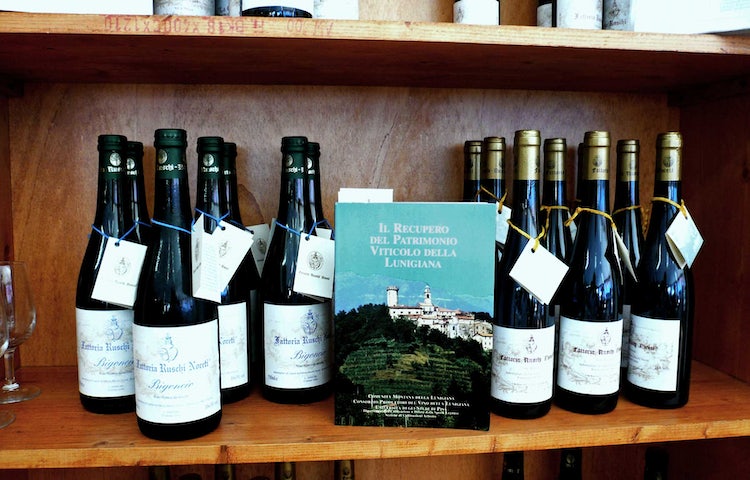 The area of production suitable for the geographical indication typical (IGT) of Val di Magra includes part of the administrative territory of Fivizzano, Casola in Lunigiana, Aulla, Licciana Nardi, Tresana, Villafranca in Lunigiana, Podenzana, Pontremoli, Filattiera, Mullio, Bagnone, Fosdinovo, Carrara, Massa, Montignoso. The Val di Magra Bianco is the perfect companion for a wide variety of dishes including the local herb filled pies, whereas the Val Magra Rosso could accompany a ltypical Zeri amb dish and the Rosato pairs well with semi-aged cheeses. You could check out some Val di Magra IGT  wines at this website.

The wines are produced using native grape varieties, Vermentino, Albarola, Durella and Red for the Whites, Massaretta, Vermentino nero, Pollera and others. A producer of the Toscana IGT in this area includes Montepepe. 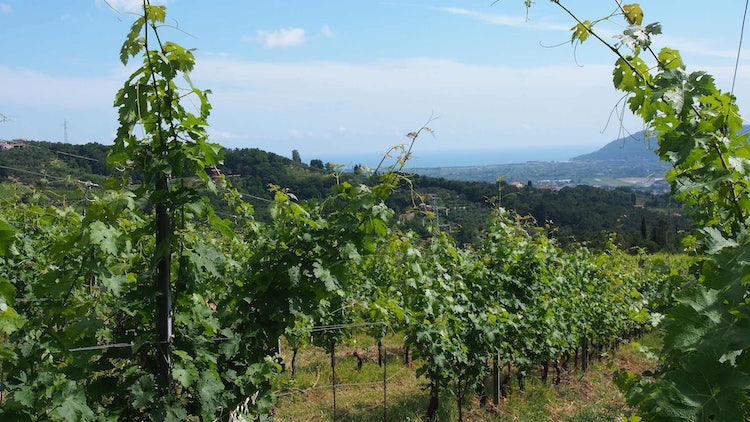 Visit the natural landscape and castle towns of Lunigiana which...

A mini-guide so you can navigate the Chianti wine road like a pro....

Here is some help on navigating the wine road...