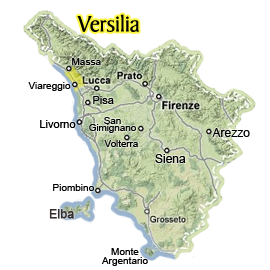 The Versilia is the area right along the Tuscan coast in the northwestern edge of the province of Lucca. It is widely known and popular for the fashionable resorts along its Riviera, with numerous night clubs attracting visitors for its active night life during the summer.

The coastal shelf along this part of the Tuscan coast is really sandy and gradually slops into the sea, making it perfect for families with small kids during the day. The many shops and restaurants (as well as hotels) along the seafront also make the Versilia a great place to spend the summer, with everything you need within easy reach.

It is easy to get to the Versilia and its beaches, as both the rail line and A12 highway run parallel to the coast. With public transportation you would take the train from Florence passing through Lucca to get to any of the coastal towns of the Versilia or take buses from Lucca; the beaches are then a short walk away.

The climate here is quite mild, although humidity can get high in the summer. Why it is called Versilia? It is called after the name of the river that runs down from Seravezza down to Forte dei Marmi!

Don't miss out on these marvelous places just because you choose to vacation without a car!  Via bus or train - Versillia is so easy to explore!!  Here is an easy to follow itinerary that you can use for your travels.

Have Fun at the Carnival in Viareggio

All the details you need to go to the Carnival in Viareggio, the most famous and spectacular carnival in Tuscany. Information on the parades, dates and other useful details if you want to take part in the fun!

Where to Park in Viareggio?

Useful information for all those who decide to drive to Versilia and need to park their car. Park-and-ride facilities offer a cheap, comfortable and independent way for enjoying the beauties of Vesilia at best.

An Introduction to Viareggio

Sitting on the sandy coast of the Vesillia, is the is the lively town of Viareggio.   Explosions of colorful beach umbrellas, striking Liberty architecture and the passing parade of floats at Carnival time.  A striking mix of a conflictual past with a fun and lively atmosphere today.