San Miniato: Between Pisa and Florence

The perfect stop for a stroll back in time

San Miniato will certainly catch your eye as you drive the main highway back and forth from Pisa to Florence; it sits high and pretty, just beckoning to you to come and visit it's quiet streets and secret corners. A quick stop can include a walk around the historic city center, where you will encounter a wide range of monuments which have been remodeled, renovated and, in a few cases, totally rebuilt. The atmosphere of this little town is enchanting and will give you the perfect opportunity to stretch your legs, purchase a few gifts while admiring some beautiful panoramic views between Pisa and Florence. 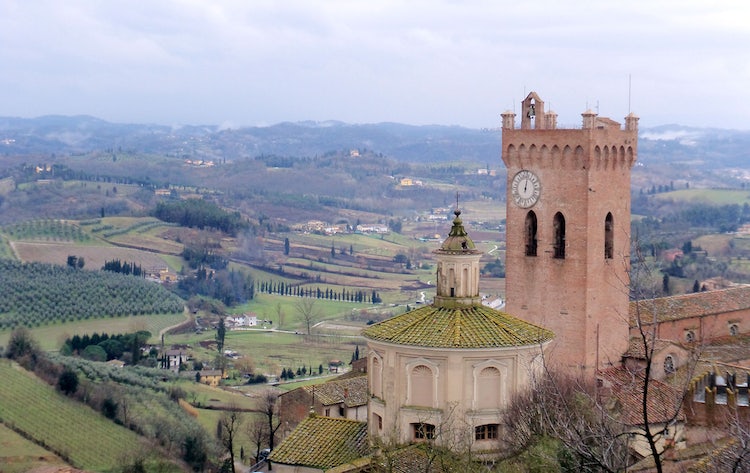 Served as a Beacon for Friend and Foe

Already well known by the Romans as Quarto, this area grew until it was finally overtaken by Florence and declined in military power as a consequence. In the last 70 years, they have worked hard to restore local traditions in leather working and truffle hunting. It is no secret that this little town was a strategic lookout for the valley. Set on three dominant hills in the middle of the valley near the Arno river, the view stretches from the center of the Italian peninsula (east to the west), where ports for commerce sat in what is now Pisa and Livorno. Its position coincided with north/south travel along the important via Francigena that connected France to Rome. The many fortified towers testify to its importance. The dominant structure is the Rocca, built between 1217-1223 to control the comings and goings between the constantly warring areas. Rocca is an Italian word that refers to a fortress built on the top of a rocky pinnacle.; 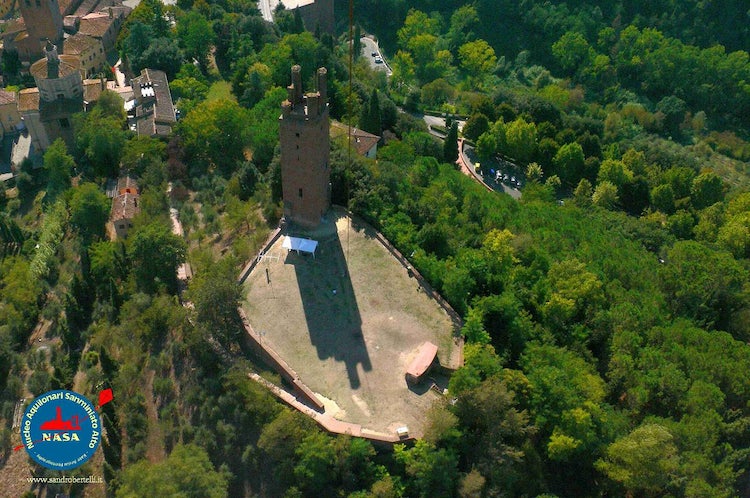 To distinguish this town from the church in Florence with the same name, San Miniato al Monte, you will sometimes find the phrase “al Tedesco” attached to it. These two words make reference to Frederick II who among many other positions and titles, was the King of Germany (thus the word Tedesco which means German in Italian). The Rocca, one of his many architectural contributions to Italy, was totally destroyed in WWII after the German army decided to eliminate the threat it posed for its potential sharpshooter position for the allies and was then completely rebuilt in 1969. It now sits in the middle of a large grassy field which is used for events in the spring and summer, especially the Festa di Aquilone or Festival of Kites. 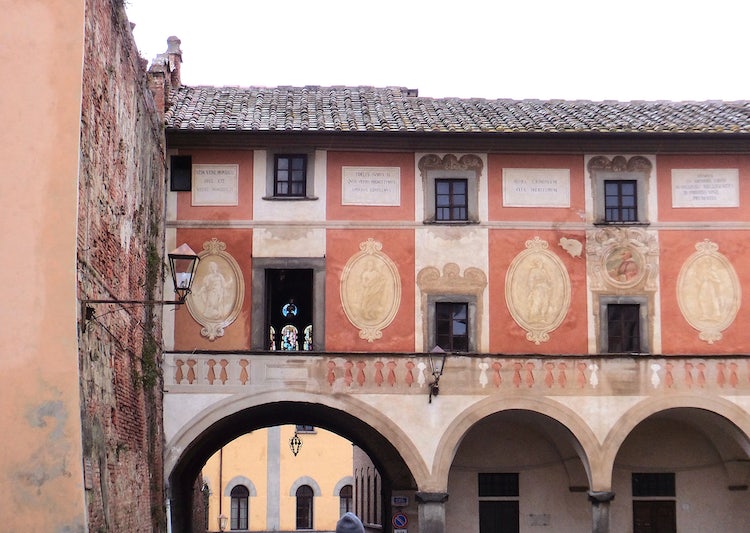 Also known as Piazza del Seminario, this square was most definitely well established during medieval times, since it is the antique city walls which give it its unique curved shape. You will notice the wooden doors on the base that look like a top heavy “T”, they are an excellent and rare example of craftsman workshops from the 1300’s. They would open in the center for entrance into the shop and the arms of the T would open as the shop counter. The “grafitti,” or figures and designs, on the walls of above the shop counters is from the 1600’s. This square is used today for markets and festivals. 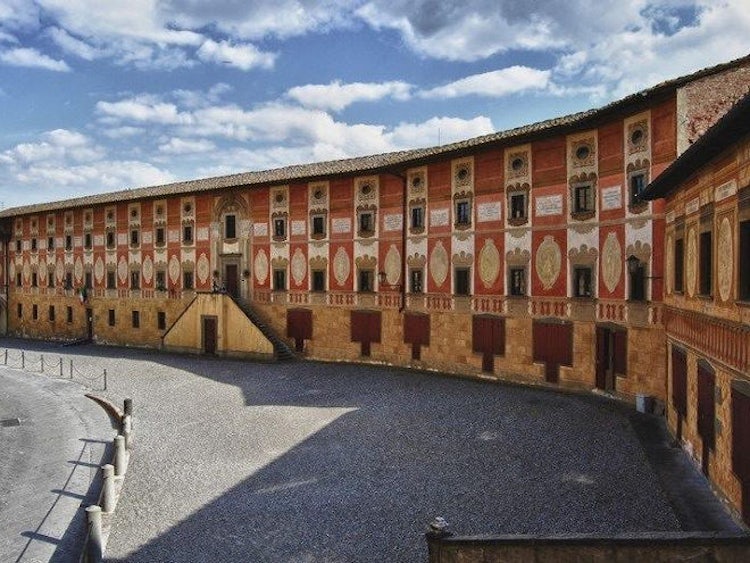 The Duomo, built of red brick and much reworked, exhibits Gothic and Renaissance architectural elements and has an interesting facade which incorporates 23 colorful majolica bowls (those that you see now are copies, the originals are in the museum.) There is a small museum which includes several pieces of artwork from noted masters such as Filippo Lippi, Fra Bartolomeo, and Verrocchio. The Cathedral also incorporates a beautiful tower which has recently been restored and it is open to the public for a trek to the top and a stunning view of the valley. 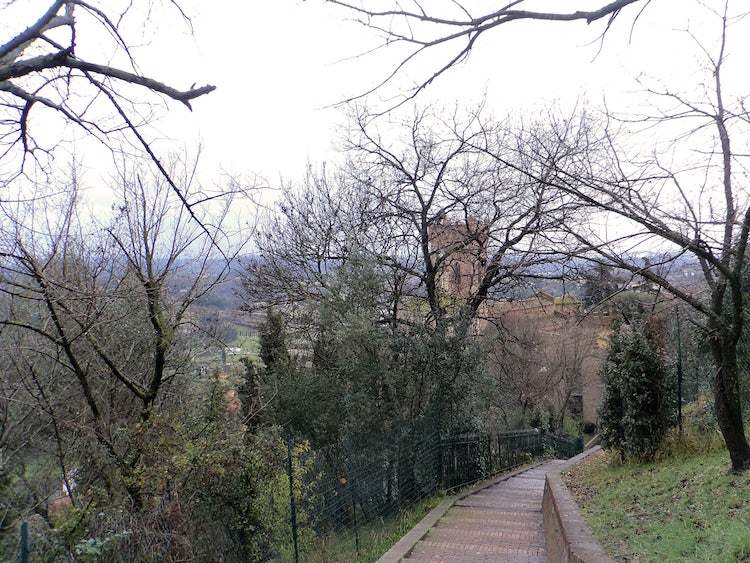 The Palazzo dei Vicari dell’Imperatore also includes an ancient tower, the oldest of the original fortifications left standing in the city of San Miniato. This tower predates the 12th century building (palazzo) and is commonly referred to as the tower “di Matilde”, named such because it is believed Matilde di Canossa (1046-1115) was born closeby.  She is one of the few women to be remembered for her military and political accomplishments in medieval times when women did not have a voice in their destiny. San Domenico, a church which has been remodeled several times (and which still has an unfinished facade) holds a few valuable pieces of artwork including work by Della Robbia and Donatello. The Convent of San Francesco, set just a bit outside the city center, is said to have been commissioned by the saint himself when he visited in 1211.

Events in and near San Miniato

There are several festivals which recall past traditions within San Miniato and the surrounding area. In San Miniato, the Palio di Cuoio celebrates the tradition of leather tanning, an activity which has had a strong comeback in the last 50 years, especially with the establishment of the consorsium Pelle di Vegetale.  Vegetable tanned leather has been recognized as one of Tuscany's unique and traditional products. The different areas of the town provide teams that roll an 80 kg. barrel symbolizing the leather which would soak in tannins to get its new shape and color. The idea is to recreate the activity as in ancient times when there were no wagons to move the heavy containers.

You can also participate in the Palio Papero in the surrounding hamlet called Balconevisi, where they race ducks who are encouraged to stay on course by young children and the Palio di San Lazzaro which honors St Lazarus and the chapel built for the lepers during their pilgrimage on the Via Francigena. 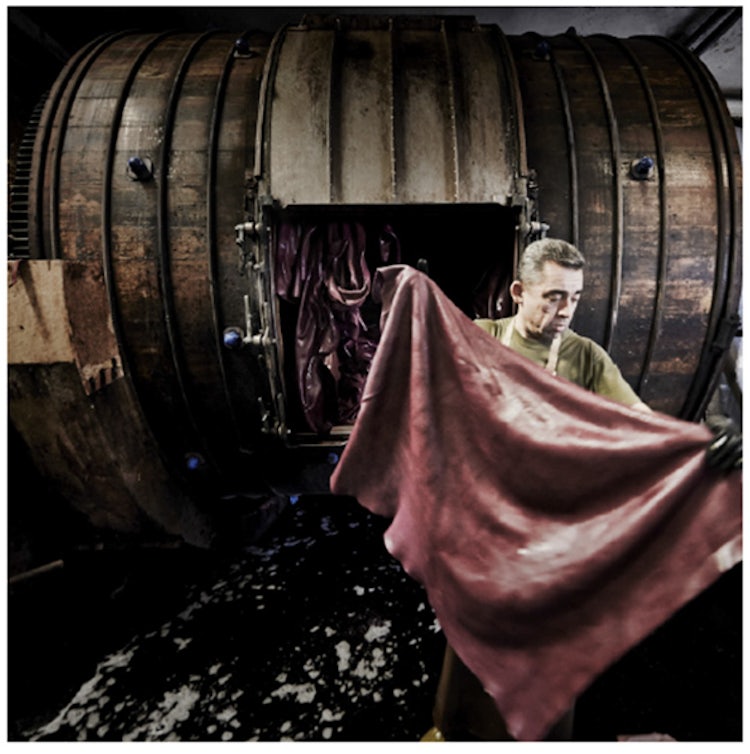 The Mostra Mercato di Tartufi has claimed much international fame.  The area of San Miniato is renowned for its white truffle production - even in antiquity there is a saying that is passsed down in San Miniato "between Doderi and Montoderi there's gold"; these two locations near San Miniato are documented in medieval records from the Historic Archive. This fair takes place the last three weekends of November and includes not only a wealth of information regarding studies and research but also an opportunity to buy and taste some fresh truffles found by the local the “tartufaio” (truffle hunters.)  If you were lookng for an afternoon of adventure, you could arrange to go truffle hunting with one the experts.

There are also two new traditions, which include all ages: kite flying fun & street artists. The idea initiated almost 50 years ago to encourage light hearted fun between the generations. The first Sunday after Easter everyone gathers in the park underneath the tower of Fedrick for the Festa di Aquilone to make and then fly kites using only the most basic of materials - relying on the guidance of grandparents for tips on how to make the perfect flying machine.  In September, you will find Maravigliosa Francigena which celebrates the entertains that were so popular during the times of the via Francigena. 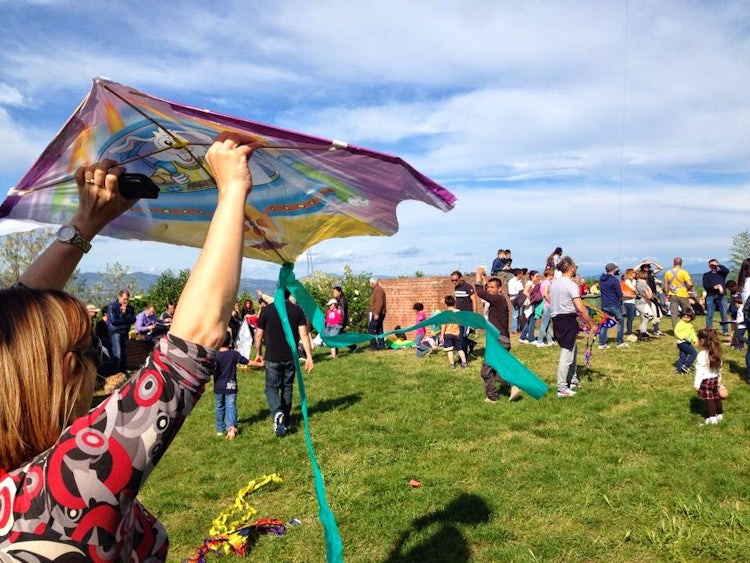 Take the SGC Firenze-Pisa-Livorno (many times referred to as FI-PI-LI) and exit at San Miniato. Follow indications for San Miniato in Alto (you first enter into San Miniato in Basso, the lower half of the city but the historical part is up the hill). There is paid parking at the top of the climb. You can also arrive by train, leaving Firenze Rifredi or Pisa Central, get off at San Miniato-Fucecchio and then catch the local bus which will take you to the hilltop, a rather steep walk.

For those who are looking for a another way to get around and like walking/hiking, there are two trails to San Miniato connected with the via Francigena, the “road from France”, better known as the trails and paths that connected northern and southern Europe used by merchants, armies and pilgrims before the 1300's. A portion of this road passes through San Miniato. From Altopascio (leg 28), there is a trail of 29 km which is indicated as easy and then another part of this historic road which leads from San Miniato to Gambassi Terme (leg 29) and its thermal waters; however, this is indicated as difficult even if it is a bit shorter (23.9 km)