Discover the ancient fountains of Siena

Providing Water Has Always Been a Challenge

In Siena, due to the fact that the city was constructed on hills, water has always been a prime concer and even today, the city continues to thrive without a natural source of water (for example, a river, as is common in many other cities). That is why the people of Siena have always worked hard to find ways to bring water to the city center. Walking along the streets of this medieval city and admiring its beautiful buildings, it is intriguing to think that underneath it all lies many kilometres of tunnels, called "bottini."

These underground tunnels were built centuries ago and have brought water from the surrounding countryside to the city since the 12th century. The legend about the underground river "Diana" originated in the 1300's, as the long lost treasure that Sienese people have been looking for years. Today, this legendary river lends its name to the association that takes care of the "bottini" and the heritage of water in Siena.

Many fountains have monumental architectural structures to underline the importance of the place where they were built. The classic fountains of the 13th and 14th centuries, like Fontebranda, contains three basins located at different heights to serve various purposes. The fresh water that flows into the first (or highest) basin was used for drinking, the second basin contained drinking water for animals and the third one provided water for washing clothes. 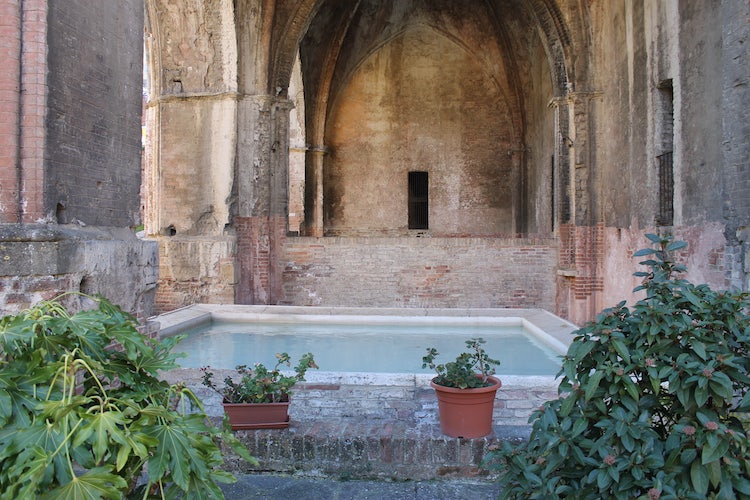 I suggest visiting the main fountains while walking in the historical city center, however, I am also presenting an itinerary which will include some of the lesser known fountains which may be more difficult to find. 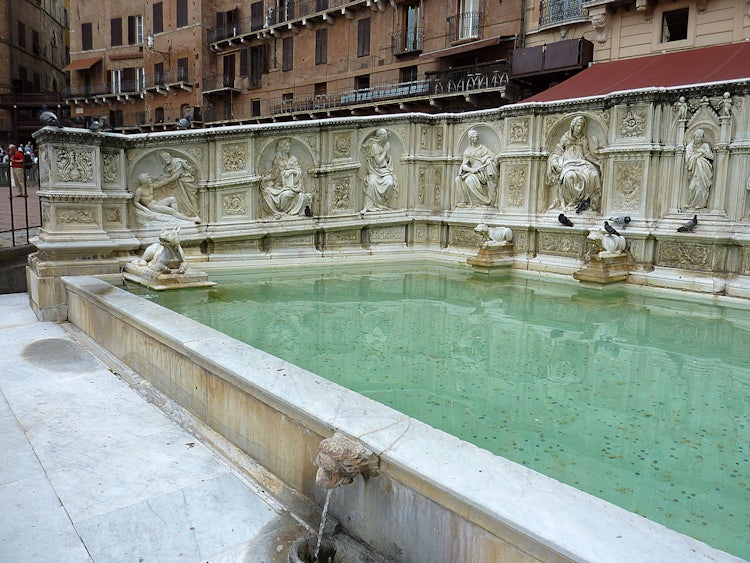 There is no better place to start exploring the fountains of Siena than with Fonte Gaia, a "joyous" fountain as its name says, situated at the very heart of the city in Piazza del Campo. The joy of the citizens who witnessed the arrival of water for the first time in the square in 1346 gave this name to the city's most important public fountain. To make this happen, a massive hydraulic work had to be done consisting of a long tunnel leading water to this quite high point of the city.  Almost a hundred years later, after the fountain was completed, it was decorated with the sculptures by an important Sienese Renaissance master, Jacopo della Quercia. The sculptures that you admire today are 19th century copies of it since the original work was badly damaged throughout the years and is now conserved in the Santa Maria della Scala Museum.

a hidden fountain between buildings 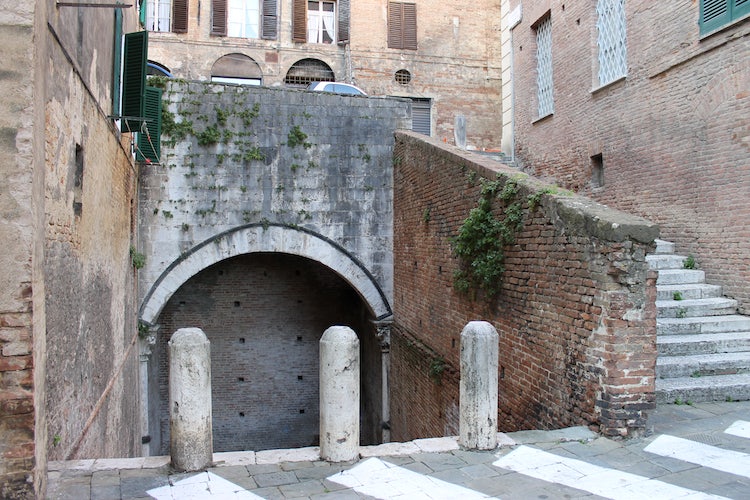 This fountain is not so significant from an artistic point of view, but instead curious given its position.  Located in the middle of the surrounding buildings, Fonte del Casato is not far from Piazza del Campo. Take Via Casato di Sotto and go ahead until you find a staircase on the left at the corner of Vicolo della Fonte.  Have a look down you find a surprise; there are steep stairs on the right that go to the hidden fountain!

the most massive of the fountains 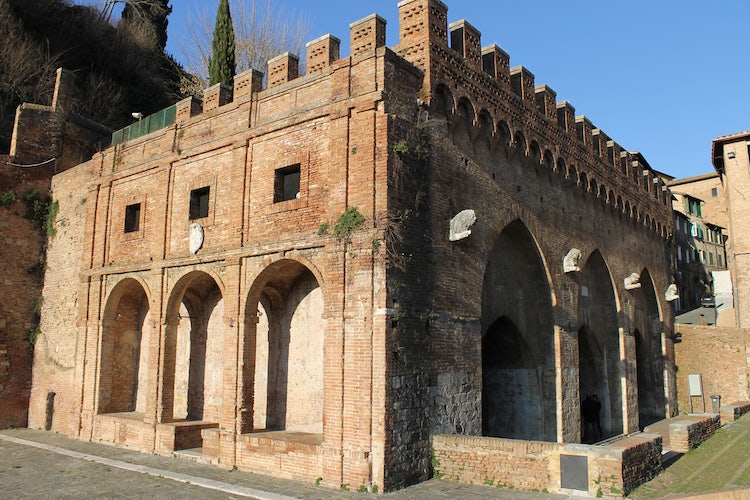 The oldest and the most famous of the medieval fountains is Fontebranda with its majestic structure to protect the water basins. Fontebranda is in a beautiful position in the valley under the church of S. Domenico. The fountian can be viewed not only from the Cathedral on the opposite hill but it can easily be admired from different points of the city. You can reach it by going down Via Fontebranda from the city center or, if you park in the nearby S. Caterina parking lot, you practically arrive directly in front of it as you walk towards the center. It is interesting to note that this fountain was well known even in the 1300's when Fontebranda is mentioned by Dante in his Inferno. As mentioned above, there are 3 basins at 3 levels to distinguish what they were to be used for. 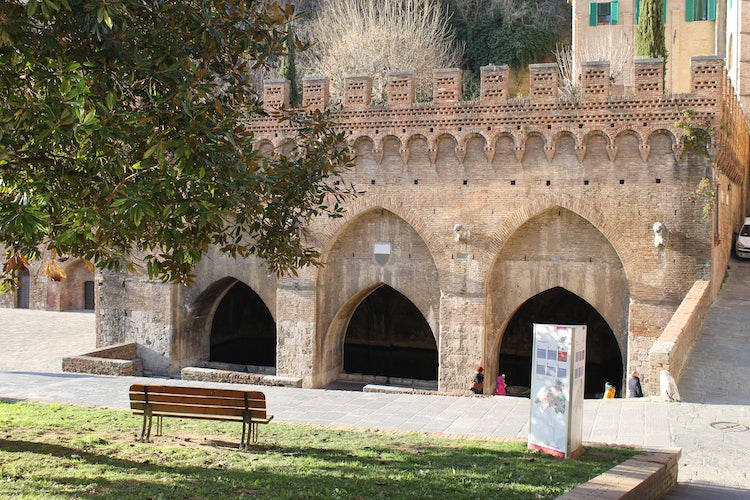 a treasury of Gothic elegance

In the opposite part of the city, near a door into the city with the very same name, you can find another beautiful medieval fountain, the Fonte Nuova d'Ovile. The original ancient fountain remains outside the city walls in a not easily reached position and that is why the fountain is called the "nuova" or new one since it was built centuries ago. The aspect of this "new" fountain with its Gothic arches is very elegant and since this peaceful part of the city offers many nice streets to explore, it is definitively worth the time it takes to get there. 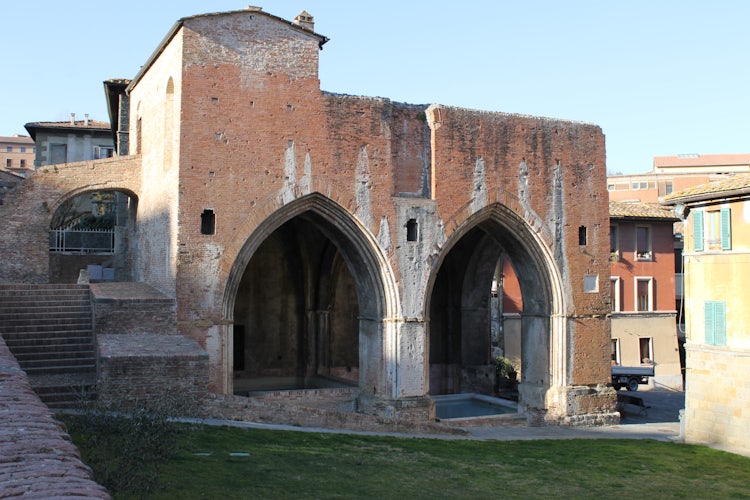 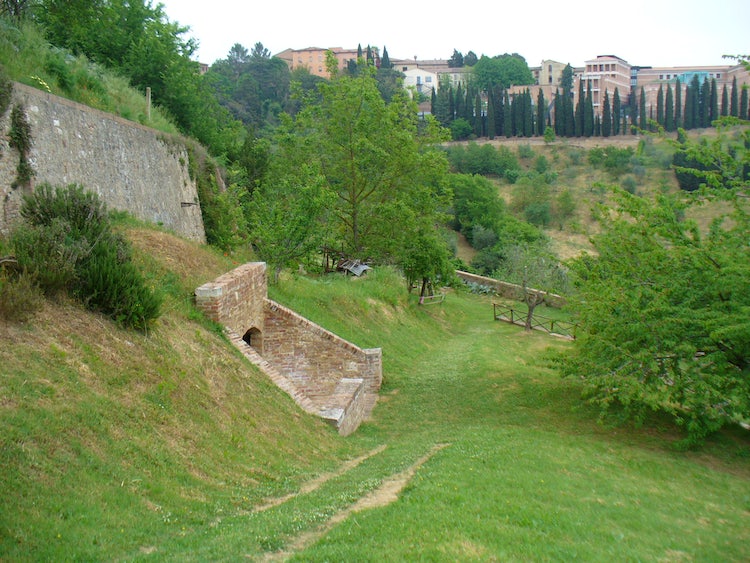 If you have already visited all the main fountains and walked through the city, I suggest that you visit a place that even many Sienese people don't know about yet it is a place that certainly deserves a visit not only for the fountain but also for the great panoramic vistas it offers.

To visit Fonte delle Monache on Via delle Sperandie, 47, you will need to plan a little.

Although the site is only in Italian, you can write an email with the subject line "Visit Fonte delle Monache". Write the number of persons, the name of a contact person and give a phone number/email address. Be sure to let them know the exact dates you are available.  They will contact you if there is a tour available. The tour is free but it is not always available. http://www.ladianasiena.it/

To reach the fountain: go until Porta San Marco and just before exiting turn left and follow the street until the corner of Via delle Sperendie where you find a door in the brick wall in front of you. Enter and after a few meters take the path on the right leading down between the olive trees and follow until you arrive at the fountain that remains hidden as it is constructed in the rock partly inside the scarp. Fonte delle Monache got its name from the nearby monastery of Benedictine nuns who could reach the fountain through an underground tunnel without being seen by other persons. The fountain can be partly observed from the outside, but it is possible to book a visit inside the structure by sending that email.

Enjoy your walk among the fountains in Siena! 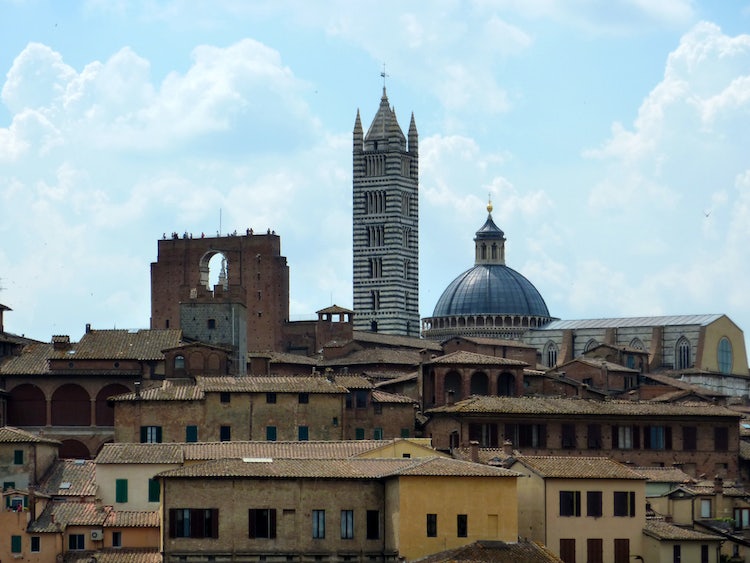