Chiusi: A Legend of Gold

The Legacy of the Etruscans

This sleepy little town on one of the southern most borders of Tuscany was one of the most important cities of the Etruscan empire between the 7th & 5th centuries BC. The town that lays before you now is an enchanting mix of Etruscan ingenuity, Roman prowess and Medieval struggles.

Perhaps the most suggestive tale is that of King Porsenna. His history is a conflicting mix of hearsay and legends but, the one real fact that stands out is that he truly did conquer Rome. His military courage and genius is the stuff bedtime stories are made of, including his funeral and final resting place. A legend passed down since medieval times, speaks of his sarcophagus being held inside a golden carriage with 12 horses and guarded by a hen and 5,000 chicks...all made of gold.

I think it best to concentrate on the gold and not question...why he was being protected by chickens... 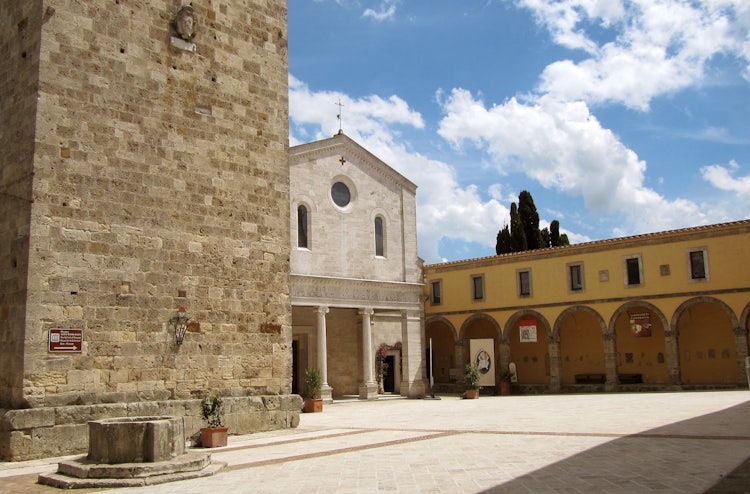 It is rumored that this treasure is hidden beneath the city in the crazy maze of tunnels that the Etruscans left behind (and that the Romans carelessly destroyed over the years.) And though rich with details from antique writings, the exact burial place and structure covering it have yet to be found.

The simple fact that Chiusi has survived in history as a fearsome power while located on a dominant hilltop without a direct water source, is a clear testimony to the creativity of the Etruscan population. Through the use of filtering tunnels and underground cisterns, they were able to gather water, increase their survival skills and rise to lofty political heights. They finally succumbed to the Roman siege, and found a way to co-habitate with the invading population. Unfortunately, the Romans saw little use for their labyrinth of tunnels and over the years they were discarded and deliberately trashed.

The strategic military position of Chiusi made it a pawn in a continuous power struggle between Orvieto and Siena and many times even Umbria had its say in the matter. Finally they fell under the rule of the Medici family (really, who didn’t finish under their rule at one time or another) until Italy was unified and the city began to stand on its own.

Things not to miss in the City

Besides just strolling the hills and enjoying a cappuccino at the outdoor bar between the museum and the church or a home made pasta dish at Pape Nero (via Porsenna, 61) there are a few landmarks that you should search out. And if you are short on time, or just making this a quick stop, no worries, Chiusi has a very small historic center. Another plus is, you will find parking is abundant on the top of the hill. 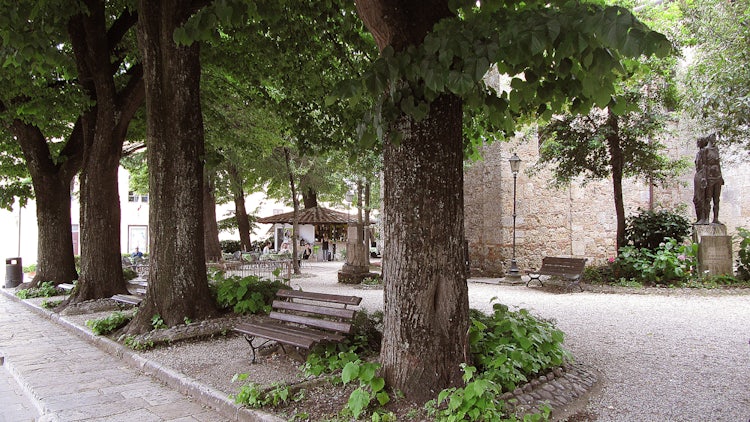 The visit will take you in small portion on the labyrinth of tunnels that run underneath the city. Be forewarned there are quite a few steps, because you are going underneath the city...and bring a sweater because even in summer it is a bit chilly. The winding tunnels are carved out of stone and feature a rich collection of grave markers. I particularly enjoyed how our guide took the time to help us decipher the tombstones, teaching us not only some of the letters but some interesting if not unusual information about the Etruscans and Romans who at one time co inhabited Chiusi.

Museum of the Cathedral

Much appreciated was the short tour and an even smaller museum. Even if it was a brief introduction to the church, I found our guides were young and enthusiastic, taking time to explain the use of the “gallery infiltrate” that gathered water for the Etruscan population. For a long time, according to popular tradition, the location of the Porsenna's burial place was part of the underground tunnels located beneath Chiusi. However, our guide assured us...rather despondently I might add, during the clean-up project...nothing regarding the burial was found. In reality, these tunnels are Etruscan aqueducts, comprised of tunnels of different sizes and at different depths.

One of Tuscany’s oldest churches

The Chiusi cathedral was built by Bishop Florentino in the middle of the VI century using salvaged material. However the travertine façade by Sienese architect Giuseppe Partini is from the end of the nineteenth century. 19th century frescoes inside the church are in an “imitation mosaic style” by the Sienese painter Arturo Viligiardi. I strongly suggest you invest the 50cents and light up the church, the interior decoration is simply stunning...even if it is an imitation. 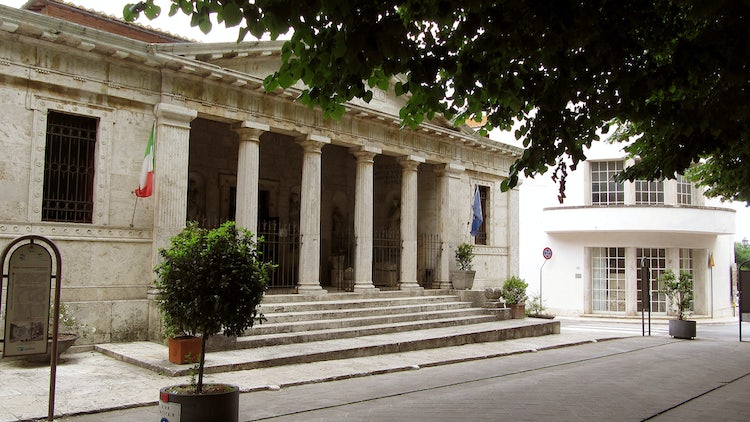 If you are curious, this is the museum to visit

Definitely make plans to visit the collection, which is both well organized and well presented. And be sure to ask for the free tablet which will give you extra information about the statues and artifacts in English. (they don't just offer it...which is a shame because it is well done.) Time permitting, sign up to visit the Etruscan tombs with a guide (who is included in the price of the ticket for the tour). They are located 2 kms outside the city walls, and you will have to provide your own transport to the tombs - but a visit to the interior is well worth the effort.

PS. It is not advertised well, but right next to the museum is another exhibition and though it is only in Italian, there are some great 3D examples of the tombs, so if you don’t get out there you can at least get a glimpse of what they look like. 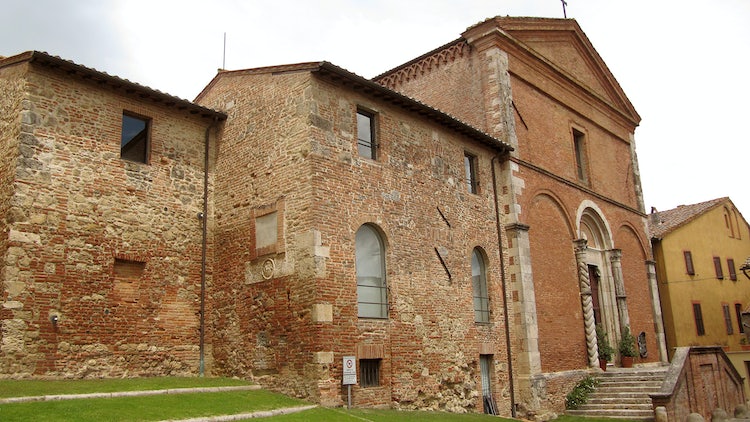 This strange little corner church and convent has an all brick exterior built in the XIII century in Gothic-Franciscan style with a single nave, probably absorbing a Lombard church dedicated to the archangel Michael. It is a quite and suggestive little nook in Chiusi.

Not only will you find that the area is rich with alternatives and enchanting little towns, but you will also find a tradition of good food and delicious wines. Try a plate of "Picci con sugo" when you stop for lunch, the thick hand rolled spaghetti and be sure to accompany it with a glass of the local wine or better yet a vino nobile from Montepulciano.

Only a short distance from Chiusi and set at the foot of the hill of Monte Cetona, this a nice place to go hiking. It has two very interesting museums, one of which will definitely entice kids with an esplorative mindset...maybe even the adults. The town is load with charm, and you don’t need to visit the museums to appreciate its beauty.  Read More about Cetona.

Sitting on the border between Val d’Orcia and Val di Chiana, boasting a rich history which was key to the development of the area. From Paleolithic finds, to Etruscan tombs to medieval castles and churches, this little town will enchant you from the very first step.  Read More about Sarteano.

This busy little town is particularly rich with water related activities ranging from the curative waters for liver ailments to thermal pools and spas with resort services. Reserve your spot at one of the spas and relax with a massage, a soak in the warm bubbly waters or a sensorial trail to commune with nature.

The Lake of Chiusi is also where the legendary flight of Santa Mustiola took place: pursued and imprisoned by the emperor, she succeeded in reaching the lake by making a sort of boat out of her cloak that enabled her to float across the water. The legend goes on to say that every 3rd of July, at night, you can see Santa Mustiola’s golden wake in the water.

The lake is also one of the most remarkable places of interest along the Path of the Reclaimed Land, a bicycle and pedestrian path of 62 km, that joins Chiusi with Arezzo. If you are going to bike it consider biking one direction and maybe training back in the other direction. Take note of the two military defence towers called “Beccati Questo” (take this) and “Beccati Quello” (take that), both built in the narrowest point of the valley, where Tuscany meets Umbria, a clear sign of the hostilities in the area (hopefully not anymore).

Add these Events to your Calendar

Battles, tournaments, banquets, artisans from yesteryear, fierce games (Tripartica) between the medieval quarters and a parade in colorful costumes with flags, drums and more. All of this leads up to the Palio delle Torri, traditionally held on Sunday. Normally held at the end of June. 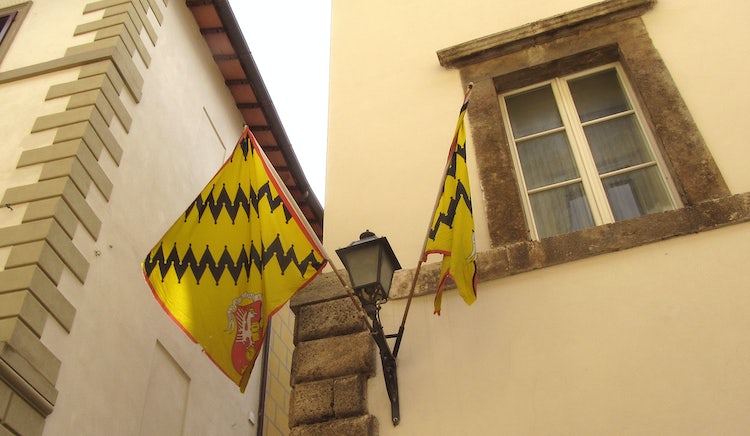 This event is really all about having fun!...and maybe a bit of a tease for all the nearby towns that have a long and well documented history... because in Chiusi Scalo, these tournaments have absolutely no historical precedent! Ruzzi is slang for games in the local dialect and Conca refers to the fact that the town Chiusi Scalo is in a valley of sorts (located at the foot of the hill for Chiusi): so the name literally means games in the valley. They have parades celebrating their ancestors from the 1900’s and play a game called Palla al Bracciale.

The Logistics of Getting Around at Chiusi

It is easy enough to find, it even has its own exit on the autostrada. Follow the indications for Chiusi, you will come up to a traffic light that is the middle point of a fork in the road...you want to be in the left lane and you want to turn left. Believe me you don’t want to have to turn around and make this hairpin turn coming from the other direction.

There is a train that leaves from Florence which goes to Chiusi Scalo, and then you take the bus to the city center.

There are several car rental offices at Chiusi Scalo among them are Europcar and Hertz. 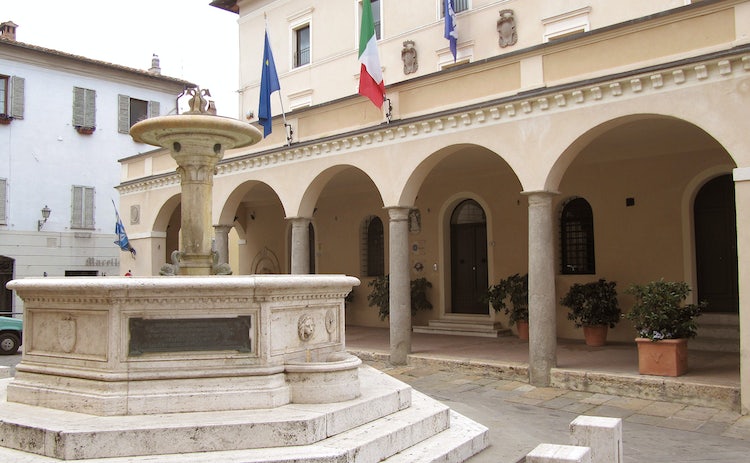 Learn more about the small town of Montespertoli in Chianti.