Cetona & the History of Man

The luminous and spacious entrance to Cetona, especially it's main square built in the XVI century by Gian Luigi Vitelli, is a stark contrast to the historic center that rises above with narrow roads and close spaces to form what some have compared to a spiraling cone.

Route: Start at Chiusi (be sure to reserve entrance to see the underground city), lunch at Lago di Chiusi, head towards Cetona for a stroll, visit Sarteano, then finish your day at Montepulciano & dinner

Piazza Garibaldi is tiled in travertine and displays a picturesque and suggestive image where the town sagras take place, the spring flower fair is laid out and where the locals gather to chat while the kids race from one corner to the next.

The piazza is named after Garibaldi, (probably) because it houses a prestigious palazzo, with a plaque that pretty much declares “Garibaldi and his wife slept here in 1849". There are two churches: ex-Church of Santissima Annunziata, which has lost much of its original architectural structure built in 1588 having been incorporated into the neighboring homes, but its interior is still rich with artwork and 12th century. 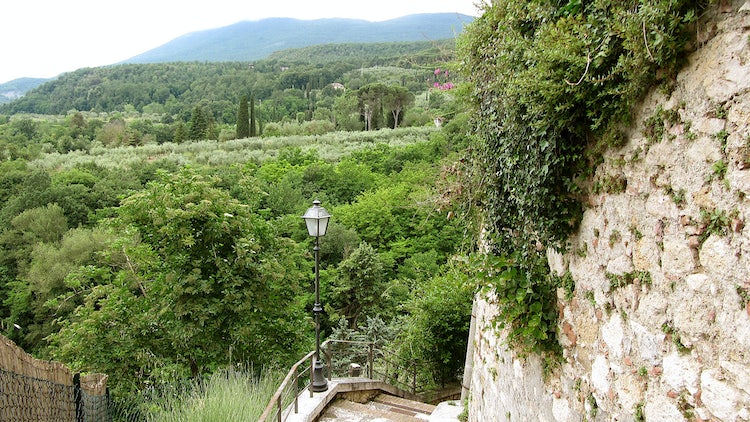 Opposite of the first church is San Michele Arcangelo, founded in 1155, presides over the square from a far corner. You can also admire the fountain at the far end and to the right of the elegant stone fountain is a “Logge" and the more “common" public fountains.

At the far end of the square is a large round tower dating from 1678 called the Tower of Rivellino, the last remaining vestige of Cetona 's third wall of defence. If you following the road next to the tower you will enter into the “centro storico", or the historic center of Cetona. 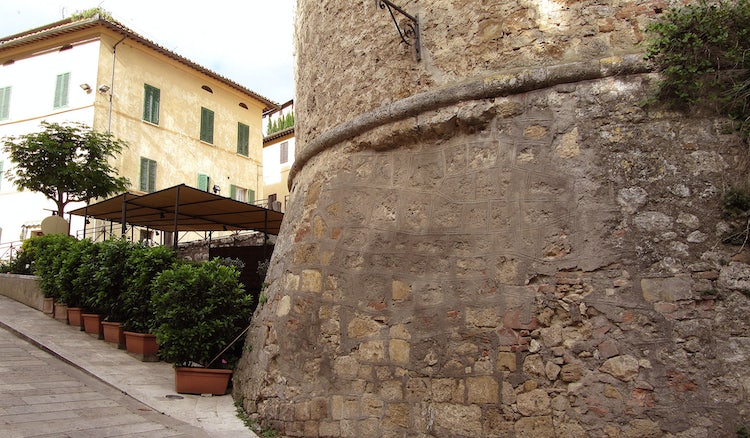 Further along the quiet and quaint streets you will pass the government building and the civic museum before coming up to the collegiate church of Santissima Trinità, built between the12th and 13th centuries in the romanic style and with a single nave, a second nave was added on the left hand side in 1571. It contains several frescoes of the late 15th century including a Madonna of the school of Pinturicchio. Palazzo Minutelli, built in the middle of the XVI century, is home to the commune since 1876.

Where: Palazzo Comunale, in via Roma 37, Cetona (Siena)

The Civic museum deals with the history of Monte Cetona ad has been completely renewed in 2014. It documents the various stages of human population in the territory, namely around Cetona starting with the Paleolithic age (50.000 years ago) up until the Bronze age (4000 years ago). The evidence of civilization existing here more than 50,000 years ago, makes this one of the oldest towns in the area, and there are several important archaeological finds displayed at the museum.

Located only a short distance outside the city is the Belvedere Archeodromo, an outdoor park to explore some of what remains from this antique populations that inhabited the area. The Archaeological Park, includes a reconstruction of an inhabited area from the Bronze Age as well as other displays which bring to life the activity of an archeological dig and a Paleolithic campground. Great idea with the kids!

Strolling through the picturesque via and viale, it is easy to lose all sense of time and allow yourself to be transported back to the year of the Rocca fortress, as far back as the X century. Today it exists as a private home, however it is still possible to imagine the sense of power this Rocca, with its three protective watch towers, must have welded in its time.

Save the Date in Cetona 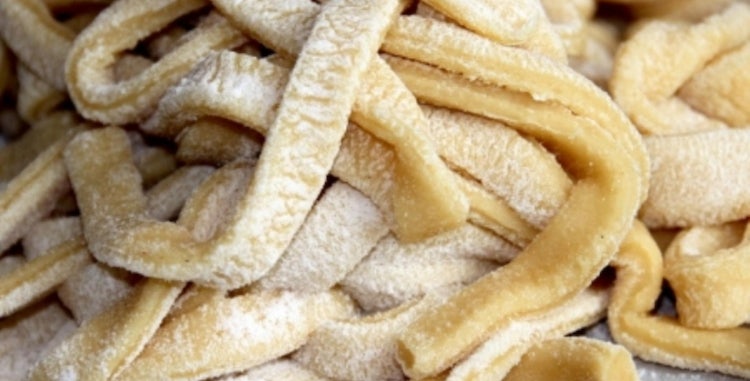 The "Cetona in Fiore" festival every April 25th fills the square with fragrant and colorful blooms. This event is combined not only with the spring blossoms but there is also the opening of spectacular private gardens, stands dedicated to highlighting the local flavors and activities for kids and adults to learn more about "i fiori" (flowers).

Another event is the La Corsa delle Brocche, held every year at the end of July and the beginning of August between the three contrade of the town: Porta a Latere, Porta Castello and Porta Capperoni. The "Race of the Ceramic Pitcher" consists of men and women carrying water pitchers of different weights around the square and trying not to lose any water. It symbolically represents the tough balancing act the citizens had to live in the power struggle between Orvieto and Siena.

There are two important sagras which shouldn't be missed, these are very particular culinary specialties from the area: Sagra del Bico and Pastrignocchi. A "bico" is a type of schiacciata/foccaccia made from flour, water, yeast, oil and a pinch of salt then traditionally cooked under warm ashes. The sagra takes place the end of June and the beginning of July.

The sagra for the pastrignoochi and cuculo takes places around the 2nd of June. “Pastrignocchi" is a typical form of pasta in long strips, made of flour and water while the "cuculo" is a cookie made from simple ingredients and was made to give energy to the tired farm workers during their break. 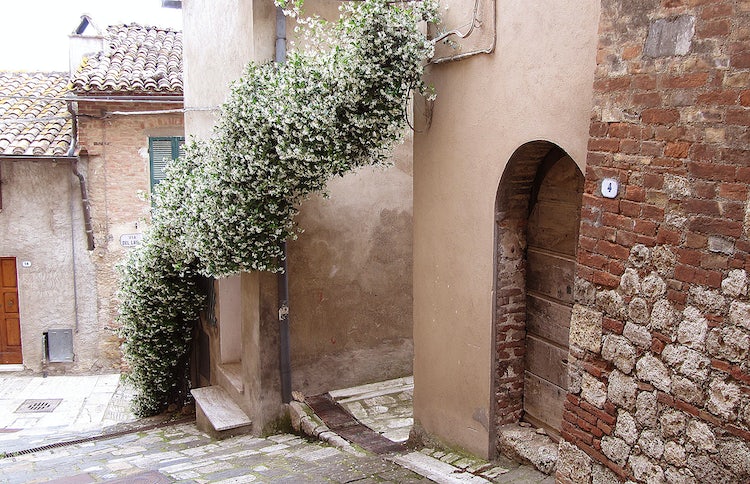 It was formed 225 million years ago when the environment was submerged in water and marine life covered the entire region. Neanderthal man lived in caves on Mount Cetona, leaving us traces of his passage such as tools made from sharpened stone and remains of animals hunted. The 1,148 meter-high Mount Cetona is a great observatory to have a magnificent view on a good stretch of central Italy: dall 'Appennino, Mount Amiata, Radicofani, Lake Trasimeno up even the Monti Cimini and the Tyrrhenian Sea in clearer days. whole Val di Chiana as far as Assisi and Perugia and the Val d 'Orcia dominated by the impressive bulk of Mount Amiata

This small borgo has been for centuries a strategic location disputed between the Papal State and its neighboring Tuscan dominions. Formerly owned by renowned Italian families such as the Malaspina and Piccolomini families. Camporsevoli was purchased by the ancestor of the present owners in the mid 1800 's and is a private residence and elegant holiday homes and apartments

Sitting on the border between Val d 'Orcia and Val di Chiana, Sarteano is a particularly beautiful and little known town which boasts a rich history, fundamental in the development of the area. From Paleolithic finds, to Etruscan tombs to medieval castles and churches, this little town will enchant you from the very first step.

There is a small historic center and archeological museum, but perhaps this town is more well known for its relaxing holiday opportunities. It is particularly rich with water related activities ranging from the curative waters for liver ailments to thermal pools, and spas with resort services. 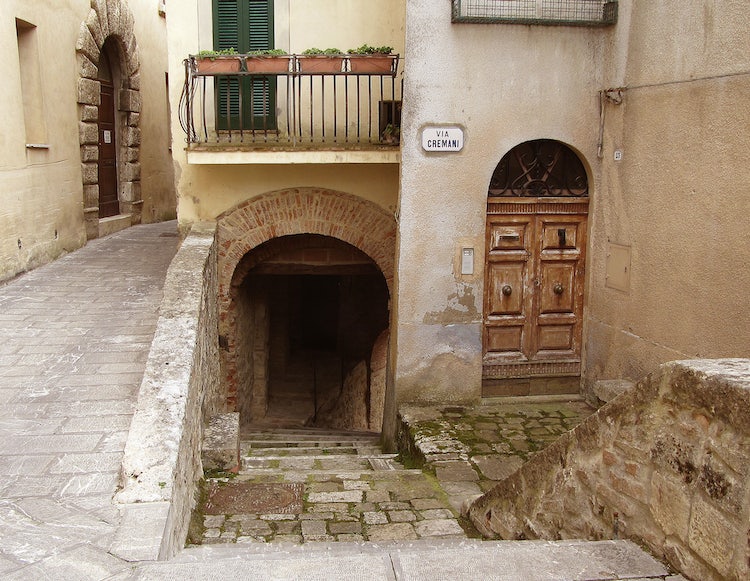 An amazing discovery of labyrinths, catacombs and Etruscan tombs to visit underground! With a delightful city center, this little town offers several options for exploring the underground. The archeological museum is exceptional not only in the quantity of material but also with the bi-lingual presentation.

Positioned between Chianciano and Chiusi, this freshwater lake...which was really a river connecting Arezzo to the Rome! Today it is a great area for a picnic, a bike ride or little rest before visiting more of Tuscany.