Certaldo, A Tuscan Town that Gets your Attention

The Story Behind Certaldo

Certaldo is the type of hilltop town that one traditionally associates with Tuscany: peaceful, timeless and inviting.

Filled with local curiosities and historic buildings, a tale of conquering families, poets and quiet streets for beautiful photo opportunities. Though it most certainly goes back to the Etruscans and the Romans, the tale of the buildings that we see today start with the emperor Federico Barbarossa in 1164, and that's where we will start.

The name originates from Latin, “altura ricoperta di cerri” and refers to a hilltop covered in trees. However, it has been speculated that these “hills” may actually have Etruscan origins...thus may not be as natural as they look. The reason behind this theory is that Etruscans would bury their important tombs under dirt, creating "hills" in the landscape.

Once upon a castle

The two separate centers, Certaldo Castello, or simply “Castello” for friends and family, and Certaldo Basso, flourished due to their proximity to the via Francigena.  As time passed and peace made its way to Tuscany, the Certaldo Castello began to diminish in size until the mid-1800’s when the major part of its religious and civic offices were moved to Certaldo Basso. 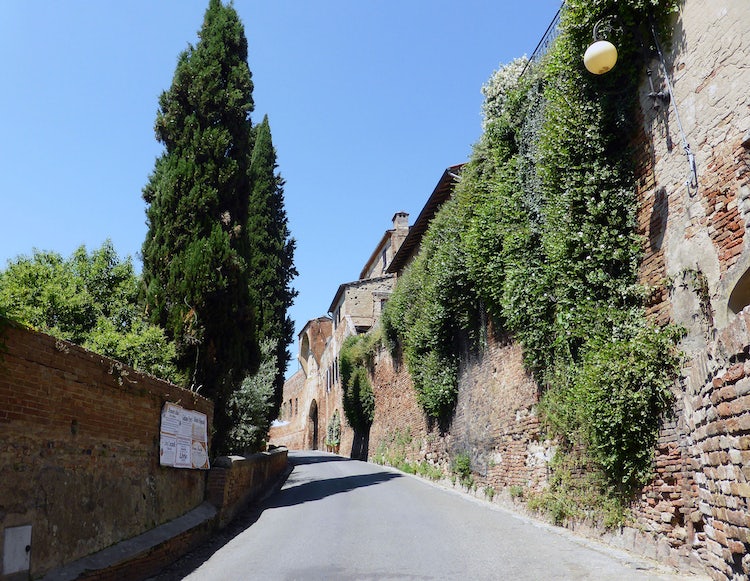 What is there to see in Town

The Streets and City Gates of Certaldo

Unlike many towns which are built around a main square, the limited space on the hilltop of Certaldo forced the town to grow along the main road, what is known today as Via Boccaccia.

Even today this main road serves as the stage where many of the historical reenactments, folkloristic events, markets, and town dinners take place. A steep walk up the old road Costa Alberti, will bring you to the beginning of the main road, where you can leisurely stroll to the Palazzo Pretorio.

Porta al Rivellino is located at the end of Via del Rivellino which meets at the intersection of via Boccaccio in front of Palazzo Pretorio. It is the oldest road to the Castle of Certaldo and is also the most picturesque.

Porta Alberti, composed of a slender Gothic arch, is a well preserved 14th-century city gate which came about after the expansion of the city during the absorption of the destroyed city of Semifonte near Barberino val d'Elsa.

Porta al Sole served as the main gate to the castle, decorated with the Medici coat of arms on the front. Visible signs of triangular corbels, traces of color and even under the arch, you can see the sacred banner used by the kings of France in the Middle Age. 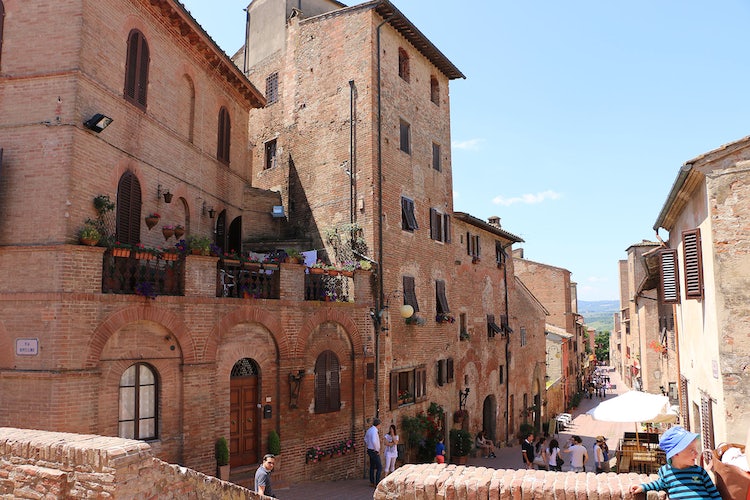 Palazzo del Vicario or Palazzo Pretorio stands at the intersection between Via Boccaccio and Via del Rivellino, the main thoroughfares of town life. Built in the late 1100's, this building once served as the home to the Alberto family, originating from the Lombards. They are best remembered for their aggressive behavior in procuring land - at one time stretching from the Apennine to the south of Siena - and their continuous confrontations with the Florentines.

Finally, in the 1300’s, Florence gained complete control and thus started a long succession of Vicari (from 1415 al 1784 there were 707 different Vicari!). Besides once housing the town prison, it now hosts a very special museum of local masterpieces and lesser known but aspiring artists.  The facade is very evocative and is the perfect place to start taking photos, decorated with a numerous coat of arms, many of which were sculptured by the della Robbia family, master craftsmen in ceramics from Florence. 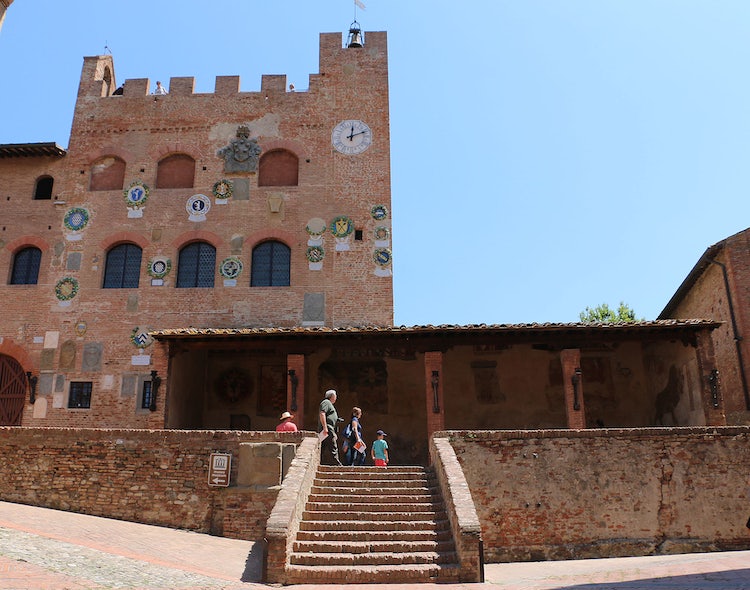 This church is nestled between the House of Boccaccio and the Palazzo Pretorio and serves as the entrance to the Museum of Sacred Art at the Convent of the Agostiniani, which were later suppressed in 1783. The connecting convent and cloister, built in the 1200’s with two stories, are supported by brick columns topped by elegant stone capitals which are very skillfully carved. Not immediately recognized by his home town, the tomb marker for Boccaccio was not added till the mid-1800’s. 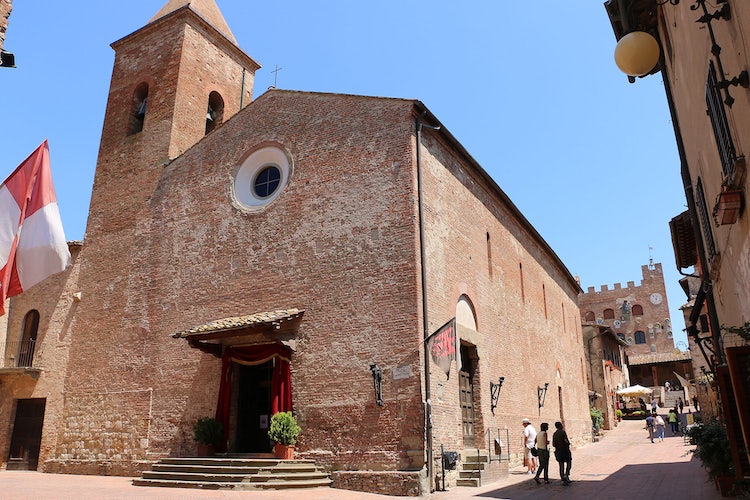 This simple church from the 1300’s at the end of via Rivellini, was the principal religious center of the Castello di Certaldo.

Time and the elements have played their part in its slow transformation, starting with the collapse of the apse (which now appears as a triumphal arch) due to the unstable hillside. Once the church was handed over to private parties, resulting in the loss of many of the frescoes but nonetheless, you can still admire the Tabernacle of the Condemned Prisoners, by Benozzo Gozzoli and Giusto D'Andrea. 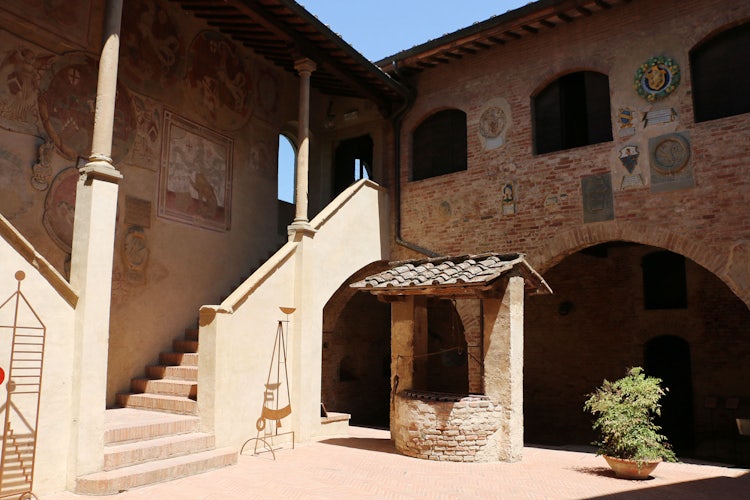 The Museum of Holy Art will most certainly be of interest for art lovers. The museum has a good collection of religious artworks gathered over the centuries. Most of these pieces were created by local artists, others by artists from the rest of the regions.

Particular and enchanting is the Hortus Conclusus, a typical garden for a medieval convent, where you can find aromatic & healing plants. 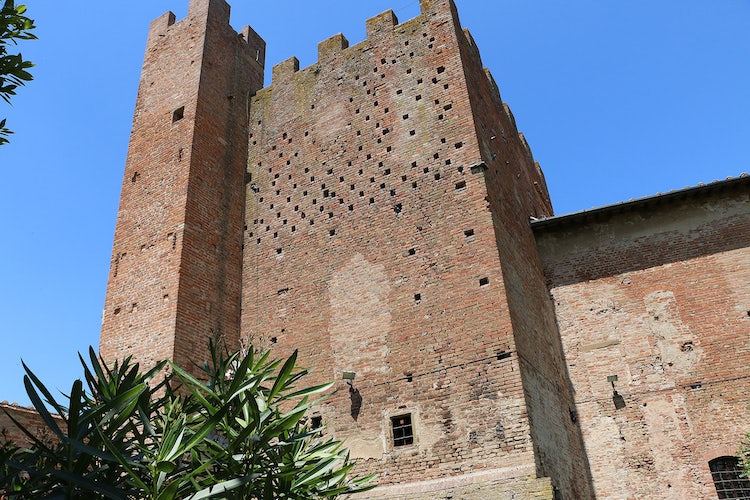 Though not as imposing as Palazzo Petraio, it definitely makes its presence felt. It is composed of a main body and two towers that overlook Costa Alberti and Via Boccaccio. The palace has a typical Renaissance style architecture. Massively restructured during the years, a recent attempt was made to “bring it back to its origins”...however, the merled design on the top never figured in the original design.

Both Florence/Pisa and Siena have direct train routes to Certaldo. 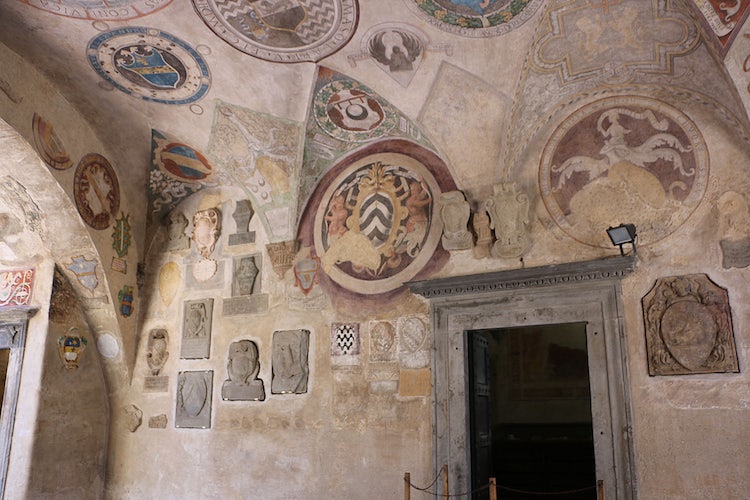 Once in Certaldo you can either attempt to park closer to Certaldo Castello - in the upper and historical part of the city or in Certaldo Basso, where you will find abundant parking.  The Funicular (a cable car), located close to public parking in Certaldo Basso will save you from making the trek up the hill by foot and is only 200 meters from the train station. It runs regularly every 15 minutes and takes about 70 seconds to arrive at the top of the hill. There are a ticket machine and a ticket booth.

Certaldo is an active town with lots of festivals and events, some of the more noteworthy are: 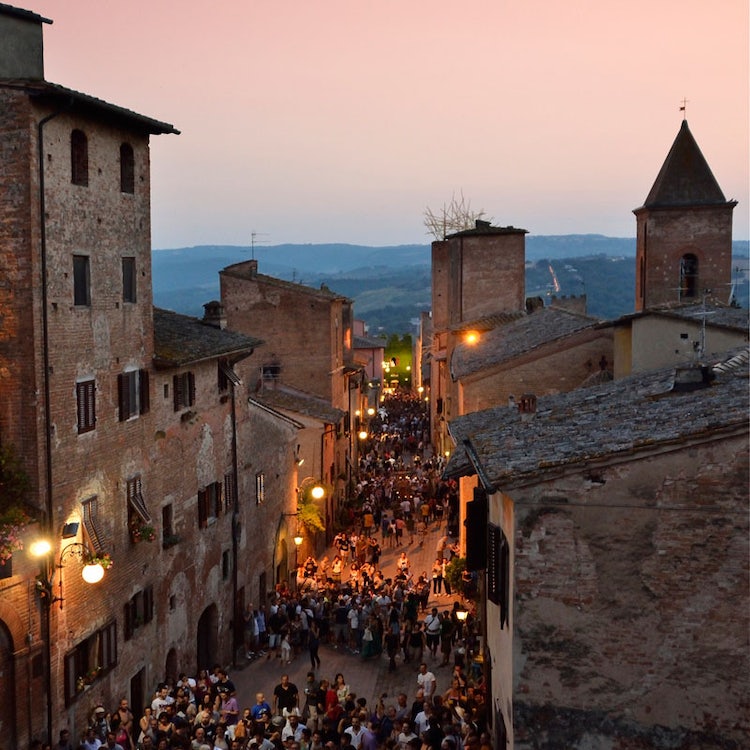 If you want your itinerary to include a small, yet extremely photographic and picturesque small town, then you need to make sure that you leave time to visit Certaldo.  You can fit this into your itinerary the same day you choose to visit another small town, San Miniato or some of the famous sites like Pisa and the Leaning Tower, or Volterra with is Alabaster treasures or even the Tower town of San Gimignano.

Learn more about the small town of Montespertoli in Chianti.