Prestigious, Open to the Public & only minutes from Lucca by car or bus

These 7 selected villas feature a unique style architecture that flourished around the Lucca area. They are all furnished with splendid gardens with layouts that borrow aspects from those in Versailles.  Since they are all located within a six-kilometer circle, you can easily visit all of them or select two or three for a day of the "rich & famous" in the Lucca countryside.  Be sure to check the opening hours, since these are private villas you will find that the opening hours may vary due to private events.

The first villa is perhaps the most spectacular both in its presentation and its history, so if you have room for only one visit, put this one on the top of your list! 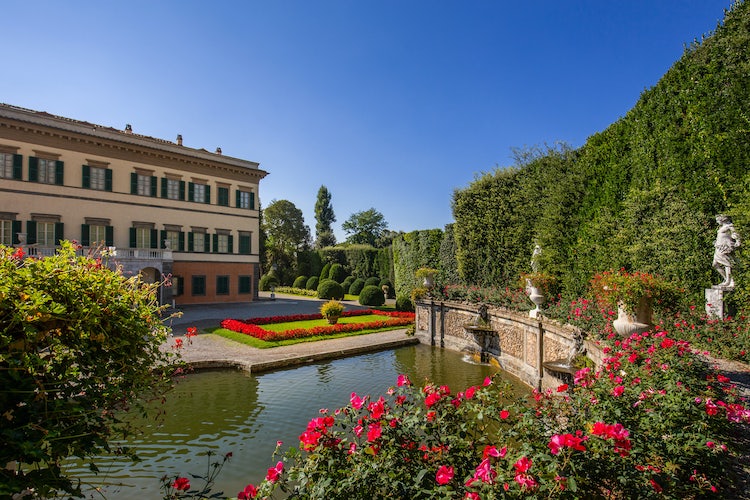 How to Arrive:
Bus: routes start from the Lucca train station to Marlia. There is a 1 km walk. Check times
Driving: take the toll road A11 to the Capinnori exit, follow SP61 to Viale Europa then towards Marila and Villa Reale.

Read our review of Villa Reale »

One of the most beautiful villas in all of Italy! As of 2021, there are newly restored rooms with gorgeous private collections in the second villa, the Villa dell'Orologio, while the main villa is open to visits since 2019 but renovations are still going one across the estate. The extensive gardens are open to the public from March through November, perfect for brining a blanket with picnic and spending a few hours to relax and enjoy.

The extraordinary history of the Villa Reale estate has unfolded across the centuries with a series of transformations, witnessed by illustrious figures and royal dynasties. The first nucleus was formed from a fortress, where the Duke of Tuscia lived during the early Medieval age. Passing through the hands of noble families, in 1806, Elisa Bonaparte Baciocchi, Napoleon’s sister and Princess of Lucca bought the property and the Villa took the name “Reale” (Royal) from Elisa’s title as Queen of Etruria. After the fall of Napoleon, the villa became the summer residence of the new court, and the stage for splendid dances, hosting noblemen and royalty often.

In 1847, Carlo Ludovico of Bourbon abdicated, bringing an end to Lucca’s political autonomy, and in the second half of the 1800s, the historic residence passed into the hands of the King of Italy. The Count and Countess Pecci-Blunt bought the estate in 1923 and commissioned the restoration of the Park and gardens, with the aim of uniting tradition and innovation. Finally, in 2015, a young Swiss couple bought the by-then neglected estate and, despite numerous difficulties, the owners accepted the challenge of bringing the Villa Reale back to its former glory. It is today the setting for gorgeous events, both hosted by the villa for the public and for private celebrations. 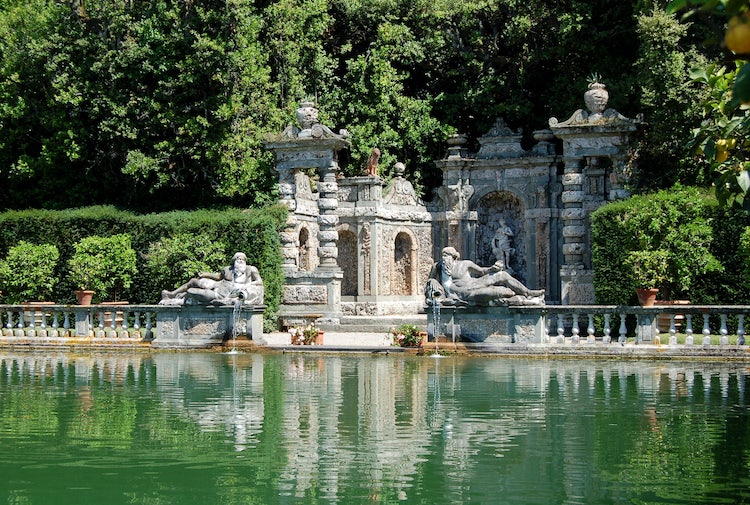 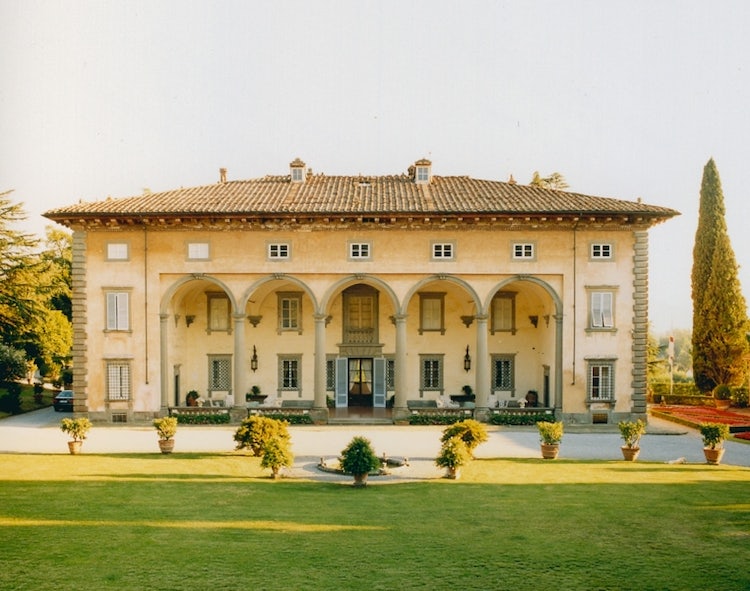 How to Arrive:
Bus: routes start from the Lucca train station to Marlia. There is a 1 km walk. Check times
Driving : take the toll road A11 to the Capinnori exit, follow SP61 to Viale Europa then towards Marila and Villa Olivia.

The first recorded document of the Villa goes back to 1593: it's a plan of the grounds and a drawing of the palace. The building of the Villa was commissioned by the Buonvisi family at the end of the 15th century and built by Matteo Civitali (1436-1501). The Palace was the residence of two Buonvisi Cardinals, Gerolamo and Francesco. It is now a vacation resort, an excellent location for events and has a spectacular garden. In 1661, Cardinal Gerolamo hosted an assembly of the clergy that included the participation of Pope Alexander VII at the Villa; Cardinal Francesco hosted another Synod in 1700. 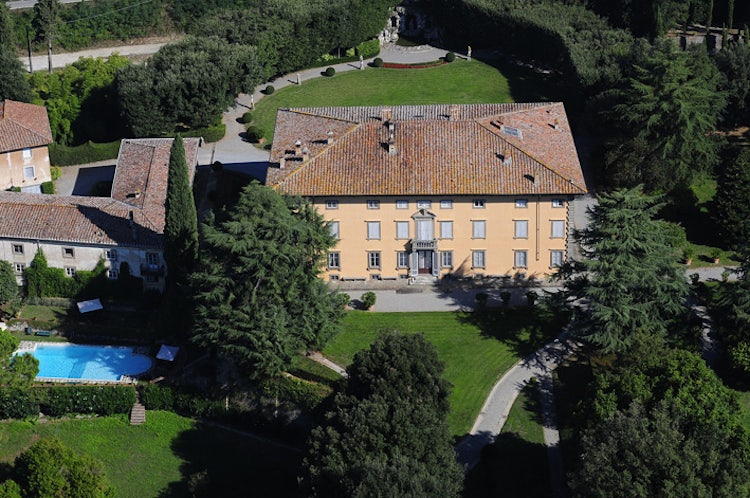 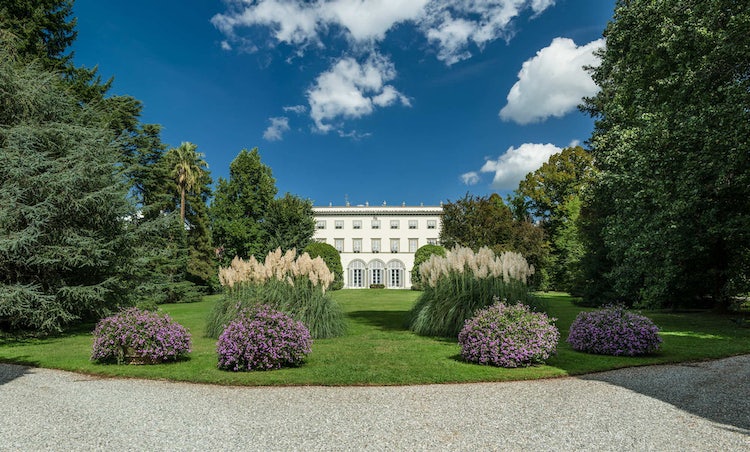 How to Arrive:
Bus: routes start from the Lucca train station to Marlia. There is a 1 km walk. Check times
Driving : take the toll road A11 to the Capinnori exit, follow SP61 to Viale Europa then towards Marila and Villa Grabau.

The Villa is entirely furnished with period pieces and paintings and is surrounded by a 9-hectare botanical park. The name of this villa comes from the last family to have purchased the property, Carolina von Grabau. The base of the structure you see today was built in the 1600s on top of another home which dates back to the early 1400s.

The Park is divided in several architectural gardens and composed by centuries-old trees and true arboreal rarities. While walking through the park, you will discover the “Limonaia” (Lemon house), an impressive and majestic conservatory for XVII century's lemon trees, and the “Teatro di Verzura” (Verzura's theatre), placed in a garden with box tree's wings creating a cosy and romantic atmosphere.

This splendid residence, often used for movie sets, photoshoots and the occasional event, represents the classic type of aristocratic residences found near and in Lucca. During the XIX century, the Villa assumed a Neoclassical look, similar to that of Villa Reale of Marlia (mentioned above) after the intervention of Napoleon's sister. 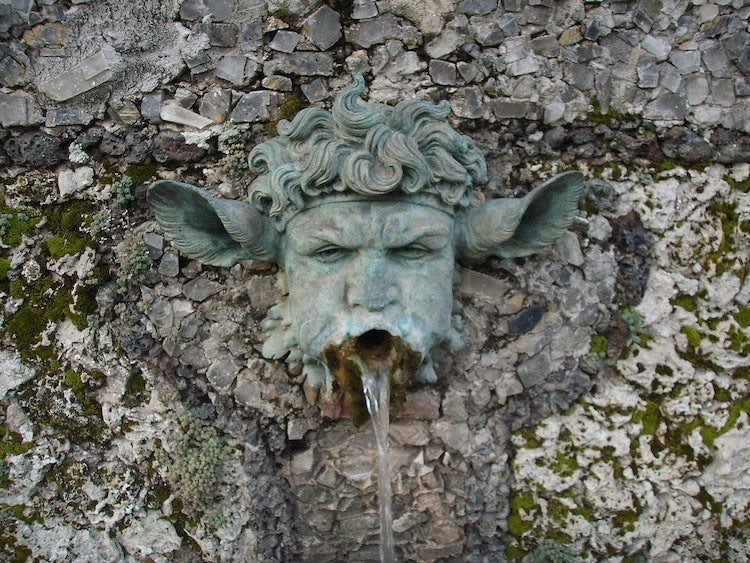 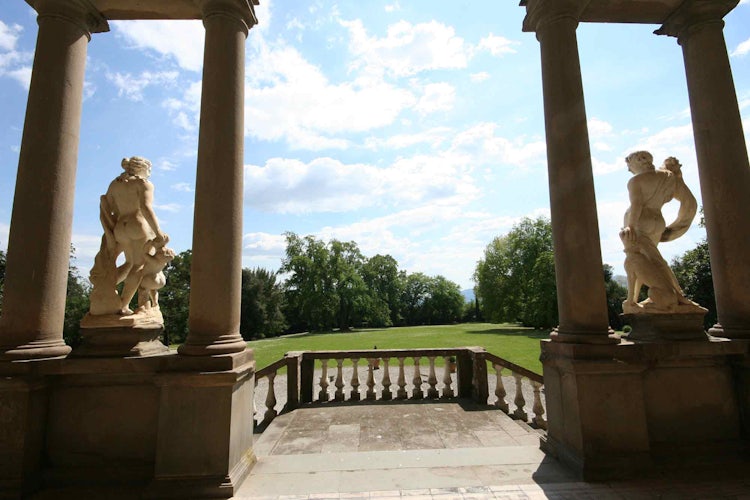 How to Arrive:
Bus: routes start from the Lucca train station to Villa Mansi. Check times
Driving : take the toll road A11 to the Capannori exit, follow SP61 to Via Don Emilio Angeli and Villa Mansi.

Many don't know that the villa is open to the public. Recently restored, you won't even miss the fact that the rooms are empty! The decor is stunning, as are the luminous spaces and views onto the garden. The gardens are spectacular and are well worth the entry fee. Wide grassy spaces, secret ponds, fountains and statues and the villa itself make great photo opportunities.

Many legends exist around the figure of Lucida Mansi, the beautiful wife of Gasparre Mansi and ancestor to the villa namesake. She probably died of the plague in 1649 but some say that she made a pact with the devil surrendering her soul in exchange for 30 more years of youth and beauty.

At the end of this period Lucida was loaded by the devil on a burning car, and once crossed the Walls of Lucca, it was thrown into the waters of the Lucca municipal botanical dell'Orto pond.

The unusual facade of this villa has two wings flanking a central portico with thin double columns, accessed by a double ramped stairwell. In 1675, the property was acquired by Ottavio Mansi from a wealthy silk merchant family and, during the 18th century, the villa underwent a major refurbishment. 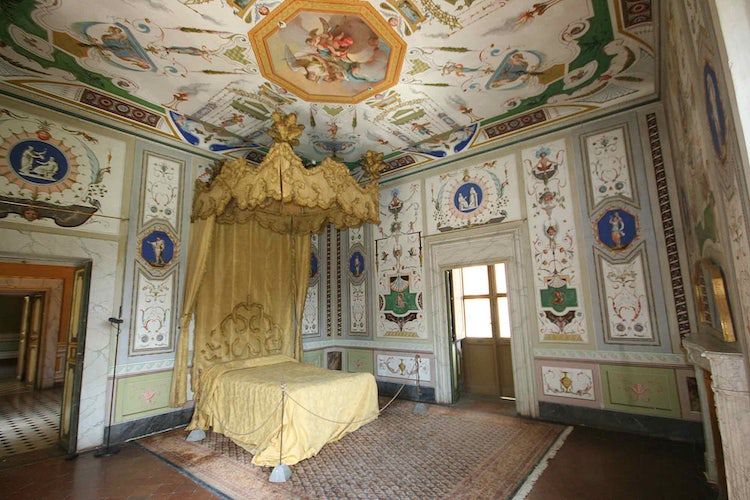 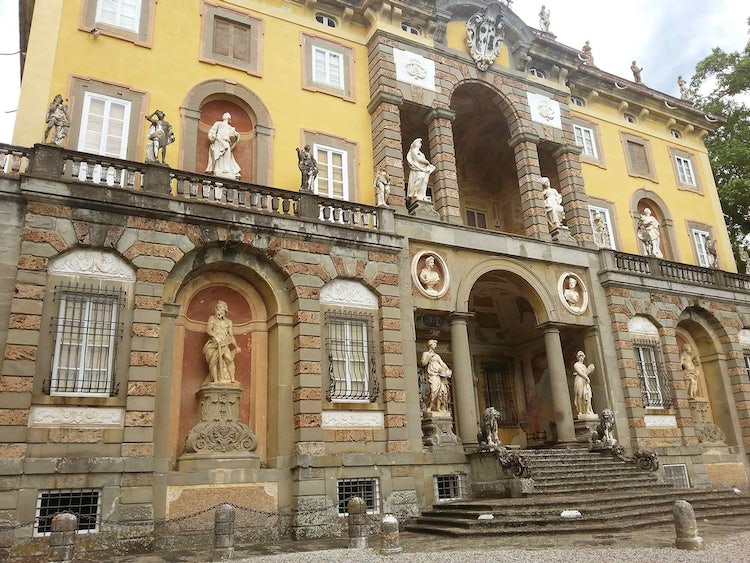 How to Arrive:
Bus: routes start from the Lucca train station to Villa Torrigiani. There is a 1,5 km walk. Check times
Driving : take the toll road A11 to the Capannori exit, follow signs to Camigliano and Villa Torrigiani.

The entry ticket may seem a bit expensive, but the tour of the villa and the guide, who has quite a bit of information to give you, in our opinion, evens things out a bit. The garden, now seen in its "English style" with grassy yards and enormous trees, is quite beautiful and well cared for but it is the villa, fully decorated in period furniture that will WOW you! (Sorry no photos are allowed so you will have to see it to appreciate it.)

Originally it was called Villa Camigliano after the small hamlet where it was built. The villa stands out from other villas in Lucca and in Tuscany by the multicolored facade of the main building created through the use of different materials: stone grey and tuff alternating yellow pillars and arches, marble statues of white, ochre plaster at the bottom with the upper part in white.

There (were) a number of "giochi d'acqua" (water games) by means of which the marquis would bemuse unwary guests, chasing them into the garden from the upper terrace. Once there, they would try to shelter in the Temple of Flora, only to find themselves soaked by water pouring from the domed ceiling.

The Villa, still fully furnished with original furniture, and the park dates back to the first part of the 1500s and the powerful Buonvisi family. Then the first half of the 1600s, the Villa di Camigliano was purchased by Marquis Nicolao Santini, ambassador of the Republic of Lucca to the court of Louis XIV who turned it into a luxurious residence with a flower garden and reflecting pools such as those designed by Le Notre for the palace of Versailles. 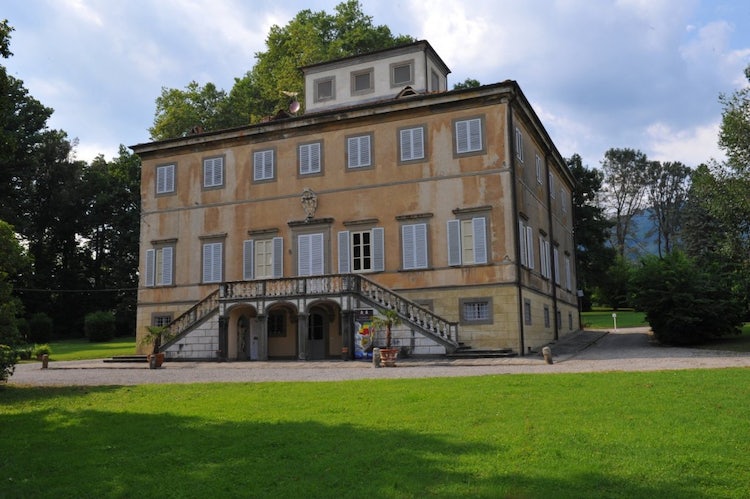 Open: Only open during public events

This garden is spectacular to visit when all the plants are in bloom: there is an exceptional collection and variety of plants, some of which are extremely rare! Especially stunning are the camellias which boast a ripe old age and beauty. Most of this is due to the passion and green thumb of Marchese Antonio Mazzarosa, who in the 1800s gave a new look to the park. One of the best ways to view the garden during the event Ville in Fiore in May. 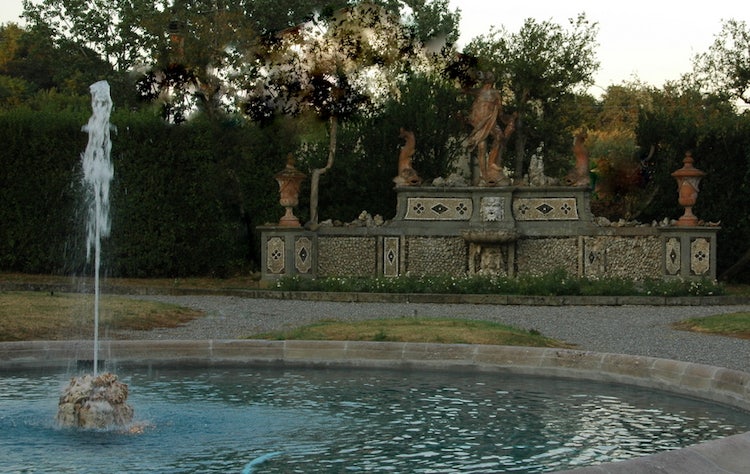 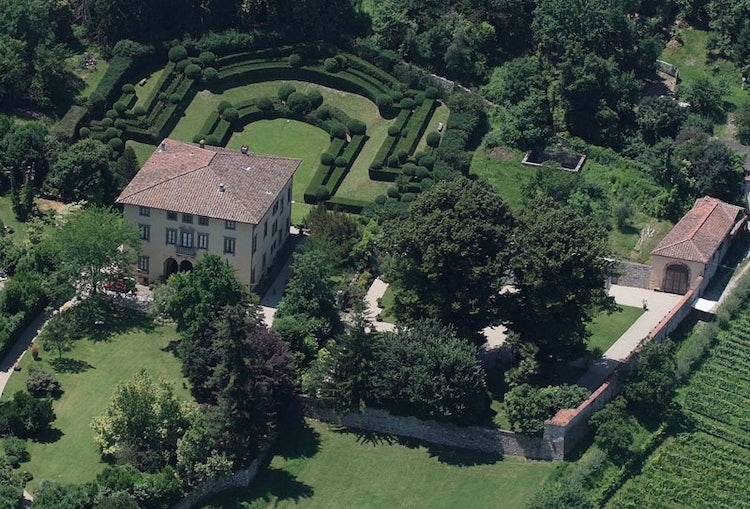 How to Arrive:
Bus: routes start from the Lucca train station to Villa Mazzarosa. There is a 650 mt walk. Check times
Driving : take the toll road A11 to the Capannori exit, follow signs to Camigliano and Villa Mazzarosa.

Open: Check website Reservations are requested if you want to see the villa

Villa Bernardini hosts a museum documenting the life of the noble family from the 17th century near Lucca. Often referred to as the Museum Villa Bernardini, it is located literally minutes outside of Lucca and is a typical example of a country villa built between the fifteenth and eighteenth centuries. In addition to the lovely image it creates, it is one of the few that still showcases many elements of its splendid past. Between the architectural beauty, the many pieces of artwork and the lovely garden, this villa is not only beautiful to visit but makes a stunning backdrop to any special occasion. The family Bernardini still lives in the villa, but the museum and gardens are open for visits.

How to Arrive:
Bus: routes start from the Lucca train station to Villa Garzoni. There is a 1.9 km walk. Check timetable.
Driving : take the toll road A11 to the Chiesina U., follow signs to Villa Garzoni.

Check out our article on Villa Garzoni »

While this villa and garden are not located in the Lucca area, it is close enough that it can be considered a viable point of interest. Located between Lucca and Pistoia, the fabulous villa garden is part of the wonderland that includes Pinocchio and butterflies to create memorable moments in Tuscany. The villa is currently hoing renovations and is not open to the public.