The Palio in Siena: Tips for Enjoying the Palio as a Visitor 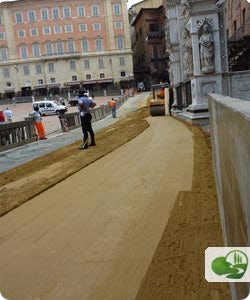 If you find yourself in Siena on one of the two days when the Palio is run, you will experience a unique, exciting day you won't ever forget. You will be caught up in the passion the Sienese people have for this event, which is much more than just a horse race.

To not just be a “tourist”, it is also important to understand what the Palio is and represents and thus act with respect to the city that hosts you on the most important days of the year for Siena.

While we talked with a Sienese friend, the idea was born of offering a short list of “tips” for visitors, on things to know or do, or not do, while visiting Siena on the day of the Palio... and so here, it is! 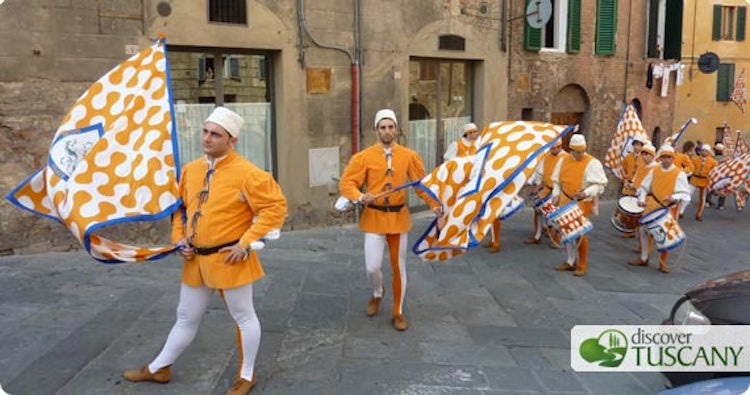 It is not an event geared to tourists or tourism

Let's start by making it clear that the Palio is not an event invented for tourism or for visitors. The people of Siena have belonged to their contrada and competed against each other for centuries, the Palio being the event in which this becomes tangible. Despite the Renaissance costumes, the events taking place up to the day of the Palio are not just folklore: it is a race that is felt deep in their bones. It is difficult for someone from outside of Siena to really comprehend how deeply the feeling goes to the result of this race, but if you're there, you'll certainly get a feel.

Siena is divided into contrada that constitute a community into which people are born into and that mark the life of its citizens. You belong to a contrada before being a citizen of Siena and there are other contrada with which you are friendly with and others that are considered enemies. It is just history and it is difficult to explain or even imagine it every changing. Stories are passed down through the generations of each victory as well as every defeat, and betrayals, slights and spites are not forgotten.

A citizen of Siena breathes in the air of the Palio year round, always waiting for these two great days in which their contrada might get the chance to race (the lottery draws 10 out of 17 contrada for each race) – either on July 2 for the Palio di Provenzano or on August 16, the Palio of the Assunta.

We participate solely as spectactors to an event the people of Siena prepare for all year long and whose results will affect at the very least the next 12 months, if not the “history” of their contrada. Imagine as a fan of your favorite sport that your team only played 1 or 2 times a year and you live in a city where everyone is a fan of your team?

You can then begin to imagine how this affects the air you breathe in in Siena, and that passions are alight on race day: tourists are tollerated as long as they respect all of the events around them.

So on these important days, it is useful to think of oneself as guests and to try to be respectful of all that occurs around us. First of all, pay attention to not impede or disturb local citizens from watching and participating in the Palio. You are welcome into the Piazza del Campo but everyone needs to see: consider the an innocent gesture as putting your children on your shoulders so that they can see better. This will block the view of other people so be prepared to be told to get them off and just to carry them. The most important moment of the race is the “mossa”, when the horses have to align on their own along the starting line and everyone is holding their breath to see if the race starts. Talking out loud at this crucial moment might also earn you angry sneers at the very least. Also pay attention where you are at all times, do not get in the way of the parades or horses. The week before the Palio has a lot of “trials” - during these, make sure to allow the horses to leave the Piazza before heading toward the exit yourself.

You might also end up in the middle of some “scuffles” between enemy contradas. It can happen and you generally do not have to worry, but obviously try to not get involved (or take photos) as this also is part of the Palio!

Attention to the Neckerchief! 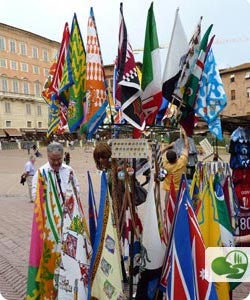 Every single shop in Siena will be selling the various emblems of the contradas in every shape and form, but the neckerchief that all contrada members wear around their necks or shoulders is the most popular. If you're interested in buying one because of the beautiful colors or animals featured, take the extra step to ask which contradas are friends and enemies of that particular contrada. This is particularly important if you buy the one for the winning contrada – you do NOT want to go into the enemy contradas that day wearing the colors of the enemy!

While you might just get a few chosen epithets thrown your way, which you might not understand but whose intention you will get, it could take some members of the defeated contrada a few seconds too long to understand you are a tourist and in no way meant disrespect.

Just know that after the Palio, the best way to recognize the perimeters of the losing contradas are that all street lights of the contrada will be turned OFF while the winning contrada (and their allies) will have lights on as they celebrate deep into the night. So our best advice is to don't venture into dark streets!

Horses are loved in Siena and at the Palio

In the past, there have been unfortunate but rare accidents during the horse race where the horses were injured gravely and which cost them their lives. These incidents, of course, raise the question of the horses welfare and the dangers they are exposed to in the race around Piazza del Campo.

During the Palio you will, however, be witness to the love and care the people of Siena have for their horses for it is through them that victory is achieved against their enemies. They are well taken care of and, if accidents were to occur, the horses are taken care of, not killed. When the horses are no longer able to race, the city has fine retirement homes for the horses to be taken care of in the best style for the rest of their lives.

While we do not want to enter into a debate of this often delicate subject, whichever your view might be, just remember to never accuse the contrada members of harming their horses because they will be deeply offended and might lead to more than very hot debates.

Dinners at the Contradas

Most visitors do not know this but every single contrada that will be racing in the Palio holds open air dinners along the streets of their contrada in the week leading to the Palio and everyone is welcome to take part! It is a perfect and once in a lifetime opportunity to enter into the spirit of the Palio together with the local citizens. You will breathe in and live the lively atmosphere of anticipation of the community as they celebrate and dream of a victory, and you'll find many of them happy to tell you what the Palio means to them. 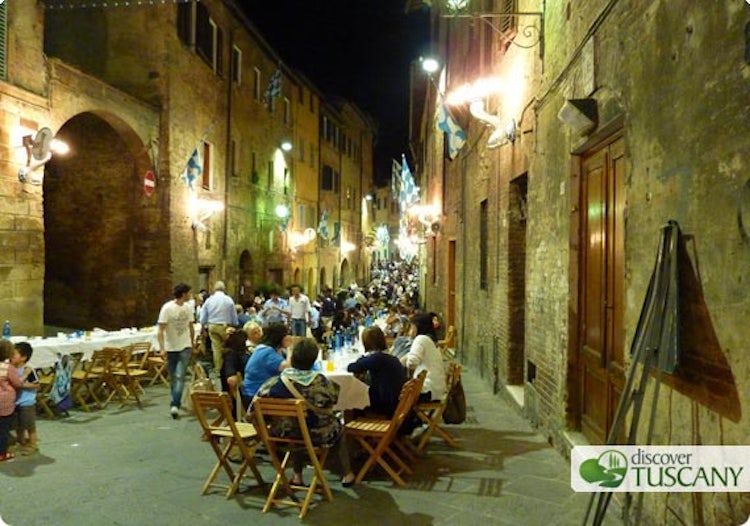 There are many dinners before the Palio, to most of them you can just head to the local office of the contrada that same day at lunch time to book a spot for dinner. The cost is generally very affordable, around €15-20. There is a victory dinner organized by the winning contrada that is reserved for members only but that, in any case, occurs several months after the Palio. 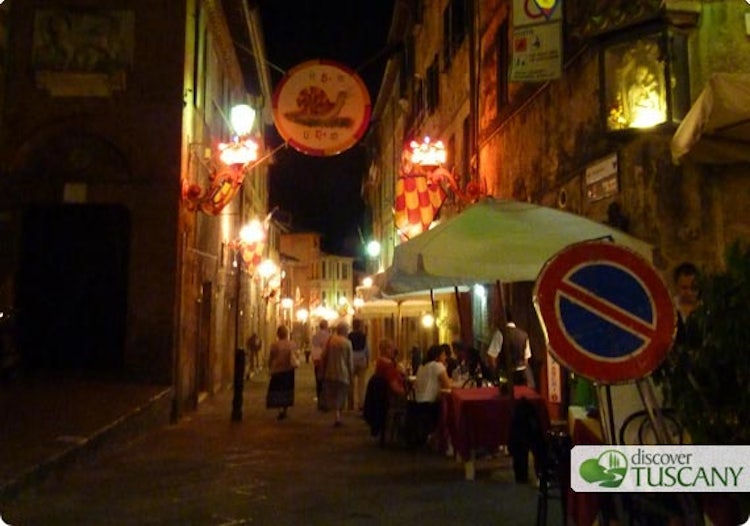 I always feel a bit sacrilegious to write about the Palio di Siena since I am only ¼ of Sienese blood. I hope to have correctly transmitted some of the tips we were given, in the spirit they were given to make sure that everyone participates and enjoys the Palio even if you're not a lucky citizen of Siena. If anyone, particularly citizens of Siena, has anything else to add or to change in these “tips for visitors to the Palio”, please do so in the comments below!