Sorano, one of the cities of Tuff

A Town Carved of Rock in the southern reaches of Tuscany

Though not totally unique in Italy, this town is definitely one of a kind when you talk about Tuscany! Using nature’s bounty, the town of Sorano is literally carved out rock, creating an intriguing combination of towers, vias and viales, alcoves and cantinas to explore that will give you an new perspective of life in the small towns in Tuscany. 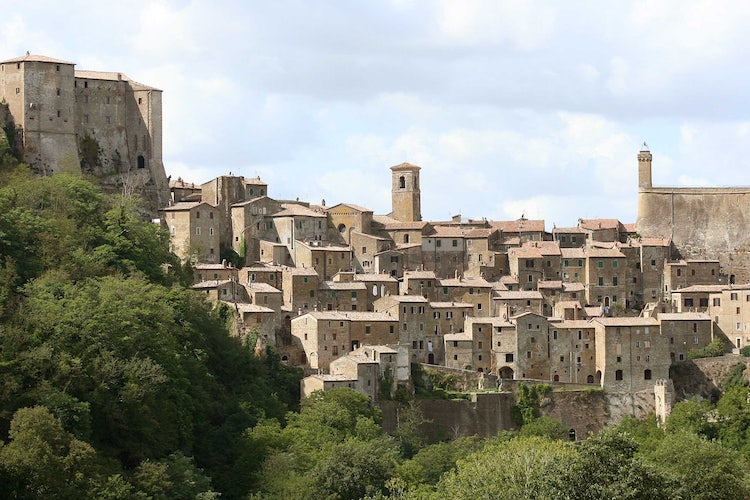 While touring the countryside just south of the Montecucco Maremma and Bagno San Filippo, you will come upon an area nicknamed “The Cities of Tufo”, after a type of rock (tuff) made of volcanic ash which escaped from vents during an eruption. Over hundreds of thousands of years, the ash is then compacted into solid rock. It is fairly soft and easily utilized for construction. Perhaps the most commonly known pieces are the statues on Easter Island or a little closer to home would be the southern Tuscan towns of Pitigliano, Sovana and Sorano.

It is speculated that Sorano was probably first inhabited by the Villanovan people, the earliest known Iron Age culture followed by the Etruscan civilization. We then lose track of the town until the Aldobrandeschi family in the mid 800’s, when they reigned as one the most powerful feudatories of southern Tuscany for more than four centuries. Briefly you can see that the town changed hands frequently in large part to its strategic position: it was part of the Republic of Siena in 1417; became fully independent in 1556; annexed to the Duchy of Tuscany and final became part of the Kingdom of Italy in 1860. 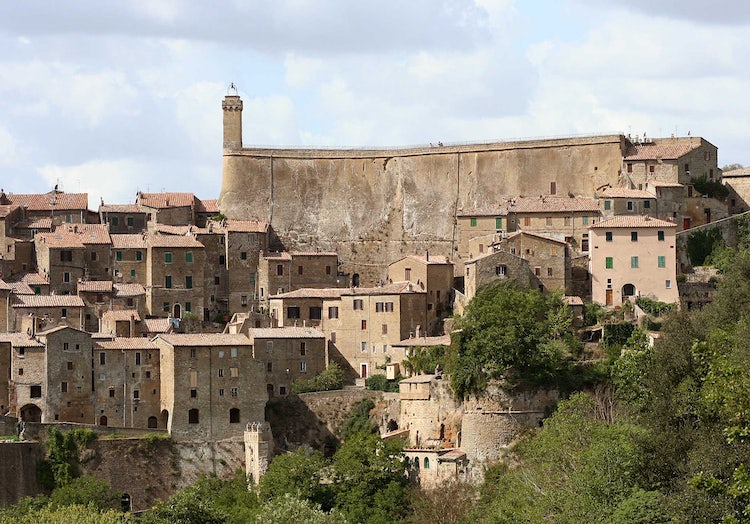 The town will enchant with its winding - some would say torturous - small streets, alleys and roads, the yellowish gray stone and suggestive architecture which spans several generations of builders. My suggestions is to park up next to the fortress (the parking is free) and walk through the fortress, cross the main street and then into the town. Follow the path all the way up to the Massa and then back down another street to get the full impresssion.

The two main gateways - or city doors are Porta di Sopra (the Arch of Ferrini) and Porto dei Merli (also known as the Porta di Sotto), are quite spectacular. The first is located at the foot of the Orsini Fortress and leads into the historic core of Sorano, characterised by stone cut walls, and narrow roads. The second door is located close to Masso Leopoldino and is distinguished by the coat of arms and if you look carefully you will still see the signs of the drawbridge hinges. 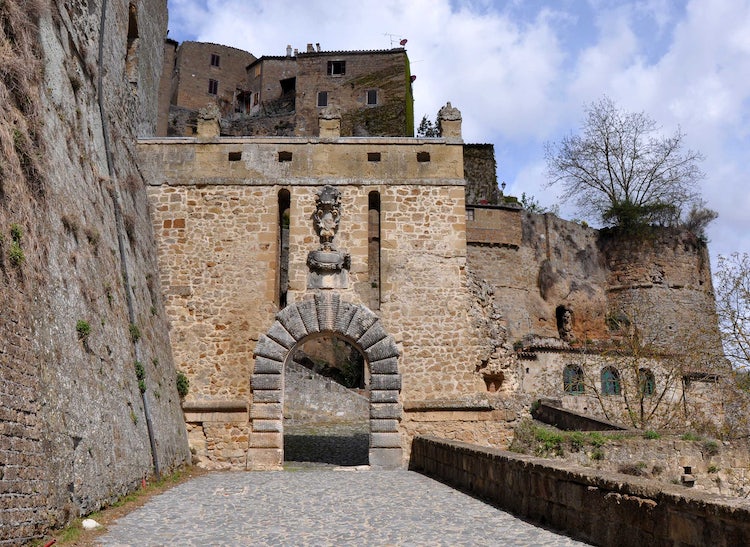 Orsini Fortress, one of the most impressive fortified structures by the Aldobrandeschi family and later expanded by the Orsini Counts (nobles emerging from Rome with property in the area of southern Tuscany in the Renaissance period).

It has two massive angular bastions, connected by a line of walls with the main gate, which is surmounted by a noteworthy coat of arms and by a square tower. In the interior of the walls are remains of the ancient nucleus, with a round tower and the drawbridge, now disappeared.

The fortress also hosts the Museum of the Middle Ages and the Renaissance which features numerous pottery pieces from the "Butti" (medieval wells) of Sorano, and the neighboring town of Sovana and Castell'Ottieri, just a little over 10 km away. You can walk along the fortress walls or tour the piazza, great views are available everywhere.

The Collegiate of St. Nicholas from the medieval period (initially in Romanesque style, of which we find traces only in the back of the church), is in the center of the town. A quick walk inside will highlight a baptismal font in travertine dating back to 1563, a stone “ciborium” (a canopy built over the main altar) from the end of the 1400’s, and a few noteworthy paintings ranging from the late Middle Ages to the XIX century. 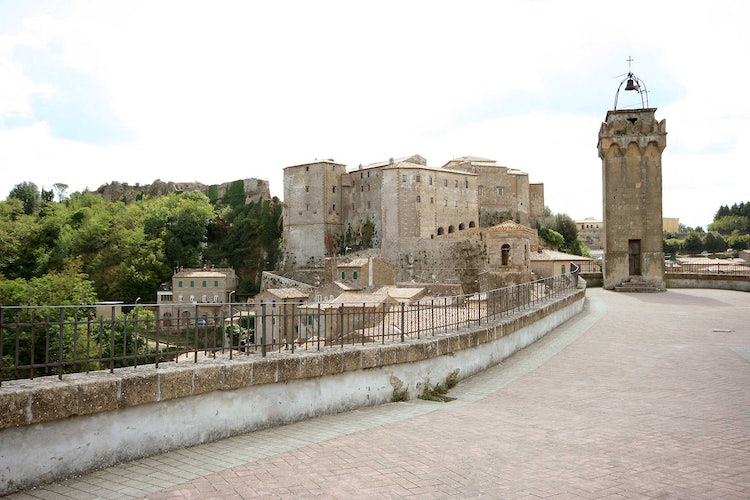 This is what they mean when they say carved from living rock - normally intended to mean stone/rock that has not been quarried but, still remains connected to the Earth. In fact this is a fortified, panoramic terrace ordered by the Gran Duke Leopold, seeming to rise out of the mountain. The name Masso Leopoldino, comes from large construction (masso) by Leopold. Built before the Fortress Orsini on the complete opposite side of the city, it was an integral part of Sorano's defensive system, along with the Sorano Walls.

Just as you are about to take the last flight of stairs to the large panoramic terrace at Masso Leopldino, you will see a brick arch which serves as the entrance to the Cortilone commissioned in the mid 1500's. Thje orginal purpose of the building was a large grain warehouse. It sits on the verge edge of the precipice over looking the river Lente. Now used for exhibitions of, you can walk through the many rooms and admire the high arched ceilings and brick buttresses, reminiscent of the interior of a cathedral. 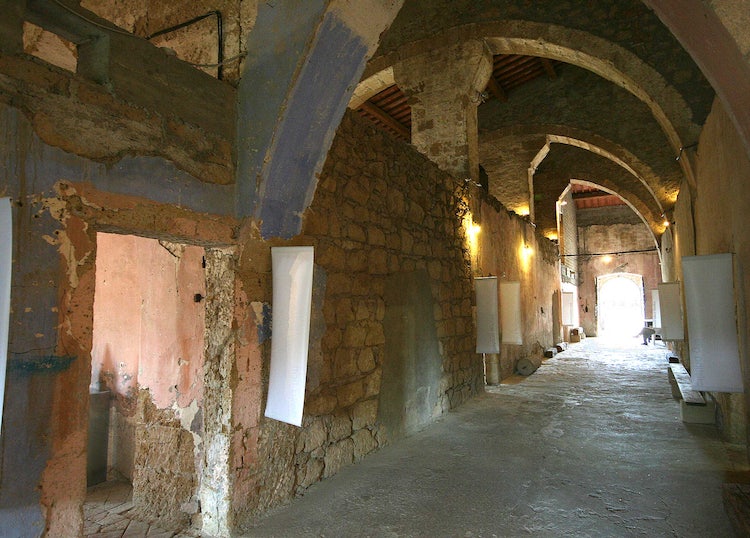 Throughout the town there are still several signs of the important Ebraic community that grew around Sorano, though not as large as that of Pitigliano. A few doors still bear the marks of the symbol (Mezuzah), and a container to store the grain used to assist the poor in the community with the next harvest and most interesting are the signs of the hinges where the door hung which closed the ghetto at dusk and then reopened the following morning.

As you start to head towards Sovana and Pitigliano, less than 2 km outside of the town, you will find a small parking lot on the right handside of the road for the Archelogical park San Rocco. WIth a short walk, about 300 meters, you can get an awesome panoramic view of Sorano, especially the Cortilone, Massa Leopoldino and the via Rocca Vecchia. 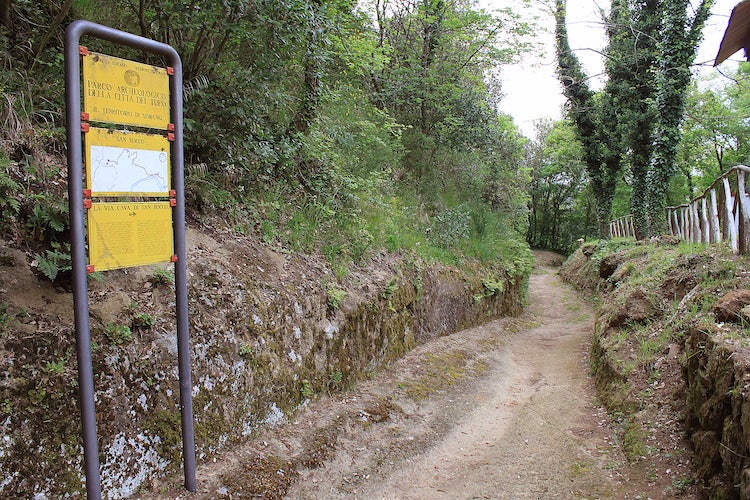 After strolling through the town and its impressive architecture it is hard to imagine that the town could surprise you with anything more - but it can and it will!

Unlike any other place in Tuscany, this landscape is characterized by deep scars embedded as winding paths in the tufa rock. It is clear that they linked the inhabitants with the cultivated countryside, the Etruscan necropolis and other settlements. Though many have formed intriguing hypothesis, the true nature of these open air tunnels, sometimes 15 meters deep in the Earth’s crust, and certainly man made, have been lost over time. 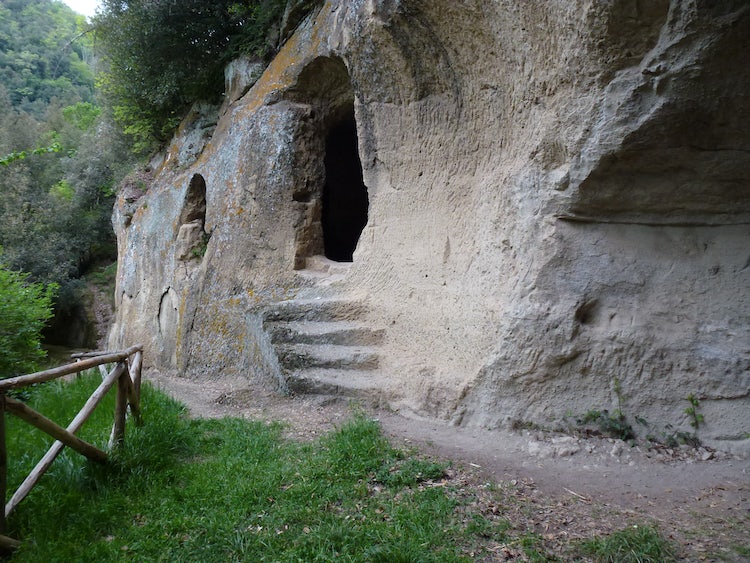 The tuff stone is a clear indication that this is a volcanic area, and the thermal baths are just another byproduct of the geological “death of the volcano”. The Terme di Sorano are open to the public and you can find more information at their official website. The historical pool call "Il Bagno dei Frati" dates from the 15th century was used by the friars who lived in the premises of the present Pieve di S .Maria dell'Aquila (located in the center of the residence).

Small in size, it 1.4 meters deep and can accommodate about fifteen people and is powered by two thermal springs that flow directly from the rock, guaranteeing the water temperature of around 34 ° in a truly unique setting.

You can also visit the Terme di Saturnia, approximately 30 km from the town. Read more about this side trip at our article.

Coming from Florence or Rome, you can take the Autostrada del Sole and exit at Chianciano Terme. The shortest route is to follow indications for San Casciano dei Bagni, Pitigliano and then Sorano. From Grosseto, head in the direction of the Terme di Saturnia and proceed for Sorano. Unfortunately, the town is not easily reached by public transport, so it is best to plan on having a car or private driver to get the most out of a day trip in the area.

What is close by

is an experience to be explored by foot, a true ghost town, if you will. Vacated during the 1800’s these caves were man made and some of them were used since the Etruscan times. The larger part of this medieval rock settlement located near Sorano, and the largest in central Italy, makes up part of the Tufo Archaeological Park. It is supposed that the caves that form the “village” were probably inhabited since the Paleolithic, but it reached its peak around the XII-XIV century.

Well documented, as you walk through the paths, you will find two-storey houses, and studios and large spaces used for artisans and still others used as shelter for animals, as seen by the presence of troughs for feed and water. 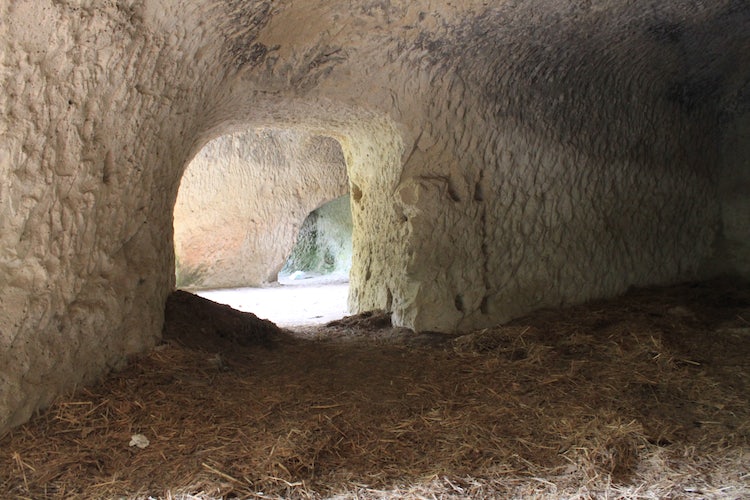 The peculiarities that would have this area and this small town stand out from the rest are numerous starting with the remains from the Bronze Age, Neolithic times and even the Copper Age — many of which are visible in various local museums. In addition to the ancient peoples who once populated this valley and mount you will find an important memory of the Jewish population and the Ghetto that was quite numerous having found refuge in this small town. Read our article on Pitigliano for more information. 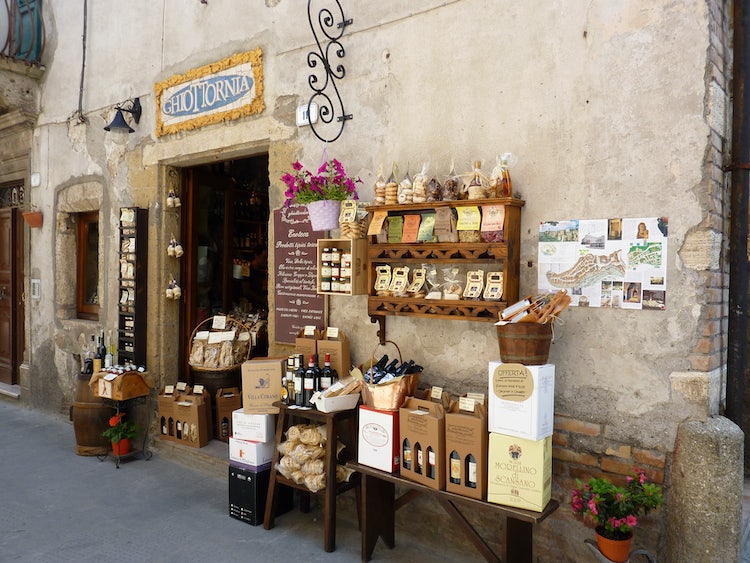 Sorano makes up part of an area called "borghi del tufo" — towns carved of tuff or volcanic stone — located quite close to the border of Tuscany and Lazio. This position makes Sorano an ideal base for your holidays discovering the beauty of these two regions in Italy.

Find your Accommodations near Sorano

Only an hour away from the coast (Talamone, Calpbio and Porto Santo Stefano), famous wine regions (Vino Nobile and Scansano) and the picturesque roads of Val d'Orcia and Montecucco.

Instead, in the region of Lazio you can visit the Bolsena Lake, the town of Orvieto or Civita Bagnoregio and several Etruscan strongholds, such as Tarquinia. Plus with a short drive you can reach a major train hub (Chianciano Terme or Orvieto) where you can catch frequent trains to Florence AND Rome - no need to take your car into the city and battle with the traffic.