Pistoia is a city that should be discovered slowly. Beautiful on the outside and the inside, especially underneath its roads and more famous squares.

Today I want to take you on an exploration of “Pistoia Underground”. A secret passage, an known walk that not many know of, an excursion that I wholeheartedly suggest if you ever happen in this area.

To understand the city one needs to go back in the years and study its origins. The information that we find, thanks to ruins and documentation, will bring to light the true story that gave life to its foundations.

The Museum Pistoia Underground begins with a visit to the smallest anatomico amphitheater in the world. At one time, 10 students came to medical and surgical lessons (one step below being a true doctor) analyzing a body, set in the center of the room with their professor

Completely functional up until the end of the 1800’s this place, decorate in a neoclassic style, is located in the courtyard of Vecchio Ospedale del Ceppo. The guided tour continues to the room next door where one will find the Sala dell’Accademia Medica Filippo Pacini. Here you can admire several surgical instruments from the XVIII and the XIX century which are perfectly preserved

As we cross the hallways of the hospital we will enter into the underground. A shiver of curiosity will accompany you in this area

You are now walking where at one time the river Brana flowed freely. The hospital was built right here, following the course of the water.  Maps of the Pistoia Underground will show the floorplan that plays out above, the rooms and and the hallways that are right above your head. And the trails begins. The guide will show you some forms in butti [a ceramic form used to feed the sick].

Amazing when you think that once they were finished using them they were then thrown into the river . . . even in the case of an epidemic (on many you will find the symbol from not only the Pistoia hospital but also that of Florence). The flow of the water was where, at one time, the hospital would throw its trash. The very same river where the ladies would wash their clothes. From this you can easily understand how the spread of epidemics was in fact inevitable. It is clear that the concept of hygiene was will a far off dream compared to what we know today.  It appears that they felt that water that moved was water that was always clean thus safe to use as a dishwasher (if you will.). Another thing that didn’t help to contain the spread of disease and epidemics was that a bed was used for sometimes two to four sick person, all together at the same time.

Their understanding of water explains, how the hospital came to be constructed bit by bit over the river. The Ospedale del Ceppo was a bit avant garde, since it had an area for the women [corsia Santissima Annunziata] who were divided from the men [corsia San Iacopo]. Want to know how it got its name?  Legend has it that at one time you would go looking for a ceppo or log, which bloomed in winter. Since one was found in this very spot, they decided to build the hospital here. 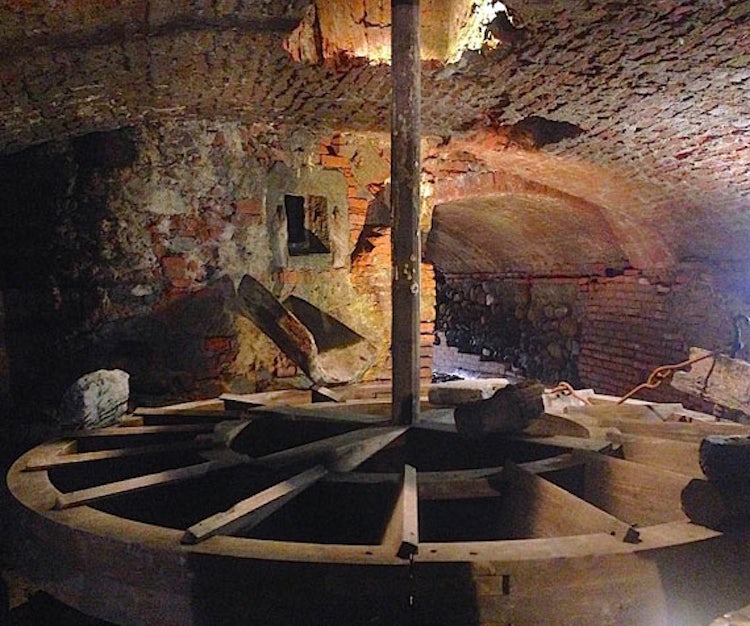 The underground path proceeds following Via del Frantoio where it is possible to admire parts of the ruota cinquecentesca from a medieval grinding mill. This “frantoi” was bought by the hospital to produce the oil necessary for their production of special cures which were sold to private persons in order to earn a bit of money to enlarge the structure. The water that flowed below here was deviated to the mill in order to make it work when necessary.

It is fascinating to discover how our ancestors made things with the limited knowledge they had and how they survived in these conditions.

As you continue along the passageway, following the voice of the narrator, you will learn that the Convento delle Suore Oblate was connected to the hospital through a hallway all the way up until the end of the 1800’s when it was finally closed to and transferred to another area. 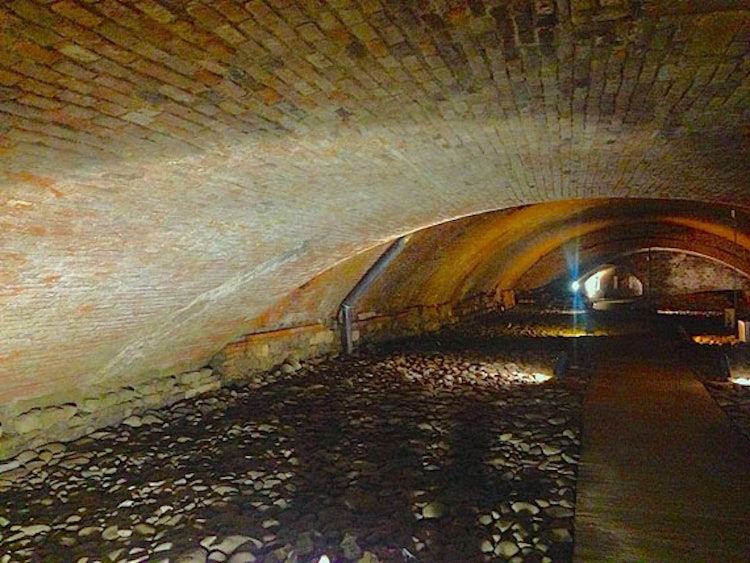 It was quite a bit later that they built the canal Gora di Scornio, the river Brana ws deviated into the Gora in order to try and limit the epidemics

At a certain point the guide will tell you to duck your heads, and at that point you will know we have arrived underneath Piazza San Lorenzo, the area with the lowest head room underground. We will continue our walk underneath the houses that reside above, where the public wash tubs are and the place where the woman came to wash in the river, throwing away trash rich with ash for washing.

The next stop is the mulino battiferro, also known as the forge where they made farm tools all the way up until 40 years ago. Noteworthy is the little window where the men could peek out to make sure that the mill wheel was working properly. Going forward again until we reach the remains of the Convento delle Convertite, with its high reaching pointed and elegant arches and what has remained of the civic tower, from Porta di San Lunardo and the bridge [zone Via San Marco].

The path ends in Piazza San Lorenzo. We emerge from its depths by a set of stairs near the forge in a room where we can admire the modern wash tubs before stepping out again into the fresh clean air.

This spectacular walk in the Pistoia Underground Museum, which at one time joined the area of Porta al Borgo with the Fortezza di Santa Barbara, was opened in 2010 after 5 years of work to excavate and restore much of what we saw today...and there are even plans to continue to explore and enlarge the area.

Today you can participate in a guided tour or even go beneath the city for a Tibetan Bell Concert (the last Sunday of month)or one of the many other interesting events that are frequently planned in this area.

Are you planning a trip to Pisotia? Here are the contact information to find out what is on the program at Pistoia Sotterranea:
Entrance: Piazza Giovanni XXIII°, 13 -Accademia Medica “Pacini”
Telephone: 0573-368023
e-mail: pistoiasotterranea@irsapt.it
Opening Hours: everyday from 10am to 6pm (ticket booth closes one hour before museum)
Guided Tours at 10,30-11,30-12,30-2pm-3pm-4pm-5pm 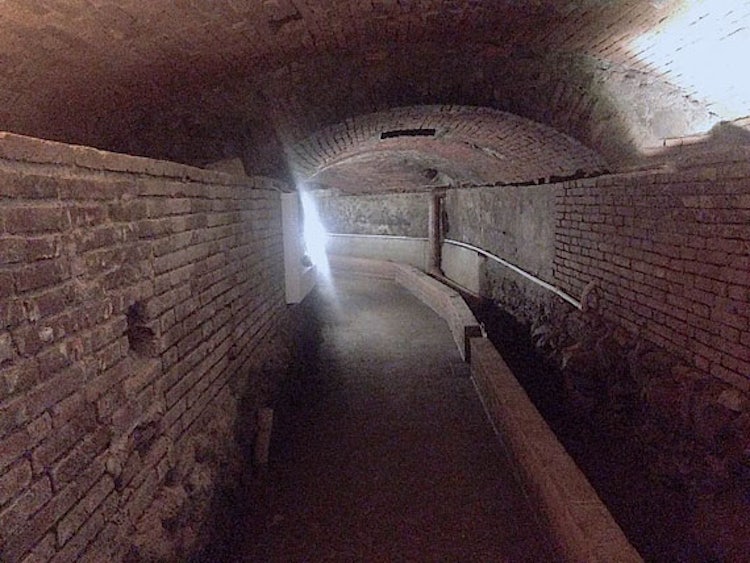