An Unexpected Discovery in Tuscany

The city of Pistoia is exactly in between Florence and Lucca, only 40 km from each, the two powers which finally subdued this thriving city and stout support of Pisa and Siena (their arch enemies). Pistoia is not always considered in the classic tourist itineraries or for those traveling to Tuscany for the first time, yet it is noteworthy for its particularly beautiful architecture and the many warm and friendly atmosphere. There are several organized events that make Pistoia a treasure for those looking for folkloric events, like the Giostra dell’Orso or some world class rythm and blues at the Pistoia Blues Festival.

Easily accessible by either car or train, Pistoia’s historic center is, in my opinion, perfect for spending a beautiful half-day in Tuscany.

A Walking Tour of the Main Attractions

Pistoia is enjoyable to explore little by little even without a set itinerary.... however, there are some must-sees.

I suggest following these points of interest to help you discover the city’s beauty, all of which can be seen on foot (the historic center is closed to motorized traffic): 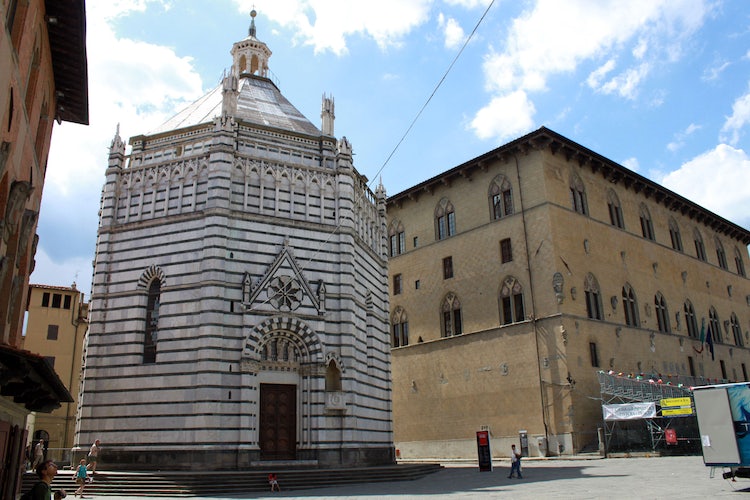 In Medieval times, the starting point in Italy for the Camino di Santiago starts in the main square of Pistoia.

The obvious place to start is with main square, housing Pistoia’s Duomo. Though perhaps not the first cathedral for Pistoia, it most definitely presents a distinct and elegance appearance. It is found within the first set of city walls dates back to the Lombard domination in the 7th century. Named after San Zeno, it dates back to the 10th century though much of what you admire today has been restored several times over the last hundreds and hundreds of years.. San Zeno was an important bishop from 300 B.C. and his statue towers on the cathedral’s roof next to the statue of the city’s patron, San Jacopo (St. James), who are historically linked to each other since it was the bishop Zeno who acquired the important relic of San Jacopo from the city of Santiago de Compostela in Spain.

Originally this famous relic was on display at La Cappella di San Jacopo. which was built specifically for this purpose. However today, the beautiful silver altar, definitely the most suggestive piece in the Duomo, and the relic have been moved to the Cappella del Crocifisso or the Chapel of the Crucifix, which is located on the right wall of the church. 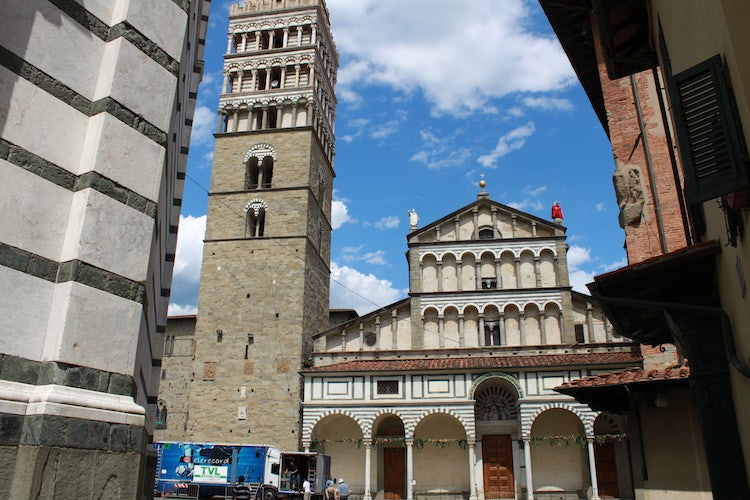 To the right of the Duomo, note the very particular brick building, the bishop’s palace, unknown as the Palazzo dei Vescovi, characterized by a loggia with lancet arches and mullioned windows. On the other side of the cathedral you will note Palazzo del Podestà or Pretorio, and opposite it the Palazzo del Comune, both where the ancient headquarters for law enforcement and local government during the years.

There are two impressive towers in the piazza: the bell tower of the Duomo and the Torre di Catalina. The first is located to the left of the church, characterized by the gothic style tower and by the swallow tail feather shape typical of the Ghibelline period. It is 67 meters high and there are two hundred stairs which await you, promising incredible panoramic views that are well worth every ounce of energy. Tickets are available at the Tourist Office. Legends tells us that the Tower of Catalin, which is dwarfed next to the bell tower at only 30 meters, is said to be the final resting place of the famous Roman general Catalin.

The Baptistery of San Giovanni in Corte, an elegant example of 14th century gothic architecture, faces the cathedral. The baptistery’s octagonal shape, constructed in two colors of marble, reflects the Pistoiese Romanic tradition. 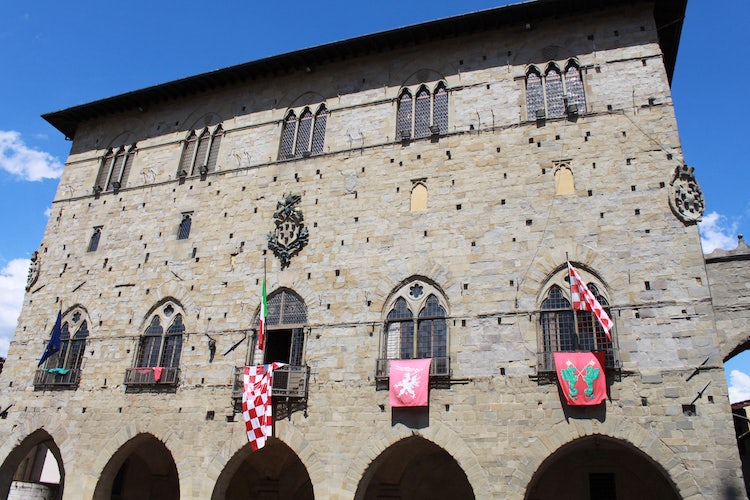 Over the centuries there have been several structural changes: in 1500 they built the distinctive exterior porch and in 1600 the complex was enlarged further. Stop to admire the loggia on the façade runs a precious polychrome frieze in glazed terracotta by the sculptor Santi Buglioni. Under the banner at the intersection of the arches are placed circular plates of glazed earthenware, made by Giovanni della Robbia.

The baptistery has gone through several different restoration interventions throughout the centuries. Upon entering, the atmosphere is solemn as well as bare. Your attention is inevitably drawn to the splendid baptismal font, positioned right in the center of the octagon, constructed by Lanfranco di Como.

Today, the baptistery is no longer used for religious services but rather, occasionally hosts cultural events.

As you leave this square, with its many monuments, you start to enter into the second wall built around the city of Pistoia, incorporating many beautiful palazzos where were originally constructed outside the first wall. Pistoia, has a small and highly concentrated city center, making it easy to walk around and explore without getting lost.

If you were to head in the direction of via della Madonna you would begin to understand why many have nominated Pistoia as the city with the beautiful churches. Basilica of the Madonna dell'Umiltà, whose magnificent cupola is one of the primary architectural symbols of the city skyline, will fool you with its seemingly nondescript facade. And only short distance away is what is thought to be maybe the first cathedral: Church of S. Andrea, where you will find on display a beautiful pulpit and masterpiece by Giovanni Pisano. 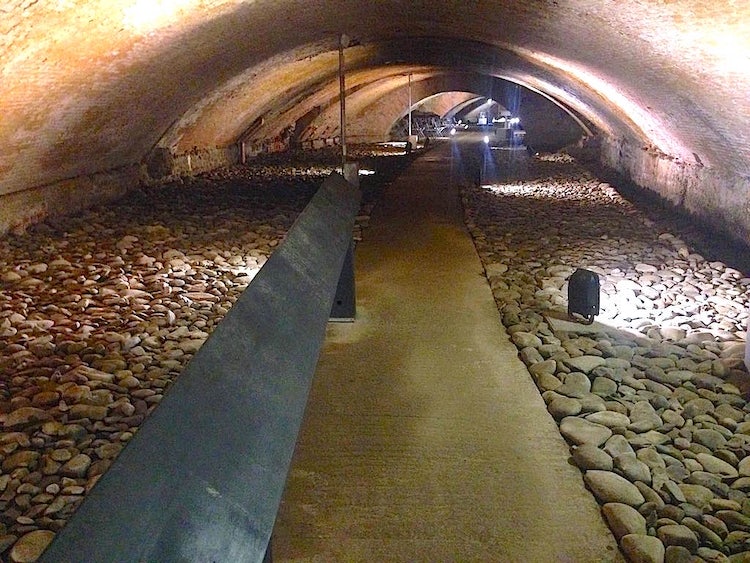 Or you could leaving Piazza del Duomo and go in the opposite direction and focus on the old Ospedale del Ceppo (hospital) in piazza Giovanni XXIII, (about 10-15 minutes by foot). Founded in the 13th century, the Ospedale del Ceppo played, amongst other things, a fundamental role in 1349 when the city was hit by an epidemic of the black plague.

Tickets can be purchased from the office just inside the hospital. The visits leave roughly every hour from 10:30 to 6:00 pm, lasting about one hour. If requested, tours are offered in various languages. Read here for more information.

Throughout the centuries, several structural interventions have taken place. In 1500, the characteristic outer loggia was built and, in 1600, the whole structure was expanded. It is worth stopping to admire the loggia, who’s façade is decorated in precious multicolored glazed terracotta sculpted by Santi Buglioni. Underneath this, at the crossings of the archways, are tondos (round artwork) also in glazed terracotta by Giovanni della Robbia.

You cannot visit the inside of the hospital but it is possible to have a guided visit through the underground basement and tunnels, thanks to “Pistoia Sotterranea”.  One last interesting fact about the hospital, it was in use up until June 2013 when all the units were moved to the new hospital of San Jacopo.

At this point in our itinerary, it is probably time for a snack or to stop for lunch.

Time for a Break

My advice is to return in the direction of the Piazza del Duomo and go to Piazza della Sala, located behind the baptistery. "La Sala", as the local “pistoiesi” call it, is home to an artisan market, various workshops and also, several wine bars, cafés and restaurants, all perfect to relax at after a morning of history, art and architecture. 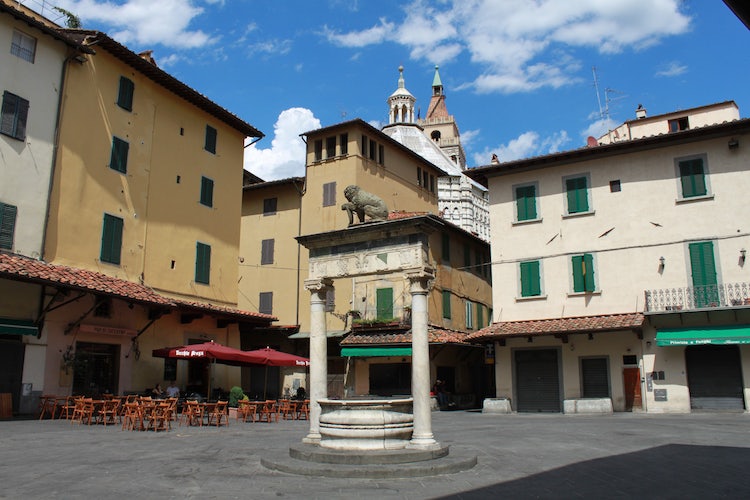 I would like to conclude this itinerary, discovering the beauty of Pistoia, with a museum visit to the Marino Marini museum in the Palazzo del Tau in Corso Fedi, only a few minutes walk from Piazza della Sala.

The Marino Marini Museum houses numerous contemporary pieces of artwork by the celebrated 1940’s artist, born and raised in Pistoia. Equestrian riders is without a doubt one of the most noted themes of Marini, but so are his “Pomone”, portraits of the nude female body inspired by the Etruscan goddess of fertility.

Looking for More to See in Pistoia

The rich and diverse history of Pistoia is ever evident in the city streets, its churches and its palazzos. If you are looking for some extra monuments to add to your walking tour of the city, have a read of this article where we revel a few of our favorite sites. Travelling with kids, and always looking to add something “appropriate” to your itinerary? Pistoia is the perfect place with its many parks filled with colorful games, green areas and picnic spots to the fun games and activities at the Pistoia Zoo. Read here about some excellent parks and the zoo. l You really can’t go wrong - no matter your age group is. 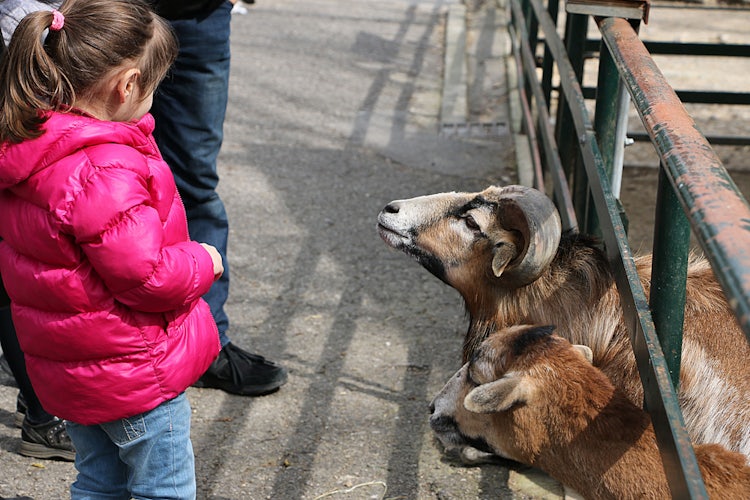 Once you have finished exploring within the city walls of Pistoia, I encourage you to spread out and explore the wonderful area and natural beauty which is only a short distance from the city walls.

Approximately 2000 hectares of Italian marshlands, which has played a major role in protecting the city due to its natural health hazards - but also thanks to its swampy lands. There are stories of Hannibal, a Punic military commander from Carthage, tried to cross here, and in doing so he lost almost all of his elephants due to the difficult terrain. You won’t see any elephants now, but it is a noteworthy nature reserve, which is an important home to many migrating birds and family oriented activities including hiking, picnics and more. Official website

The Apennine and the Pistoiese mountains are one of the favorite green havens for the locals. In the summer it provides fresh green picnic areas, trails for hiking and mountain biking. In the winter, the town of Abetone houses one of the more famous local ski resorts counting about 50 km of slopes and 22 ski lifts.

The Suspension Foot Bridge in the Abetone mountains near Popglio is the longest suspension foot bridge in the world (actually was, it has recently been demoted.) Great place to head with the kids for a break from museums, churches, town squares and shopping. Read here about to get to the Ponte Sospeso.

This zone, which can be considered both a mountain or hilly place due to its particular features, is dotted with little villages known as “10 Castella” (The Ten Castles). They are all made in pietra serena stone which was of great importance during the Middle Ages and stand tall and proud in this hidden corner of Tuscany. Read our article about these castles before you go and explore.

If you are more into quaint towns and thermal waters, then you will want to be sure to add Montecatini on your list of places to visit. Read our article about Montecatini for more information.

Pinocchio came from these very hills! The small town of Collodi, only a short distance from Pistoia is the hometown of Pinocchio...well at least the author. Fun and games for all ages can be found here, read here for more information about Collodi. 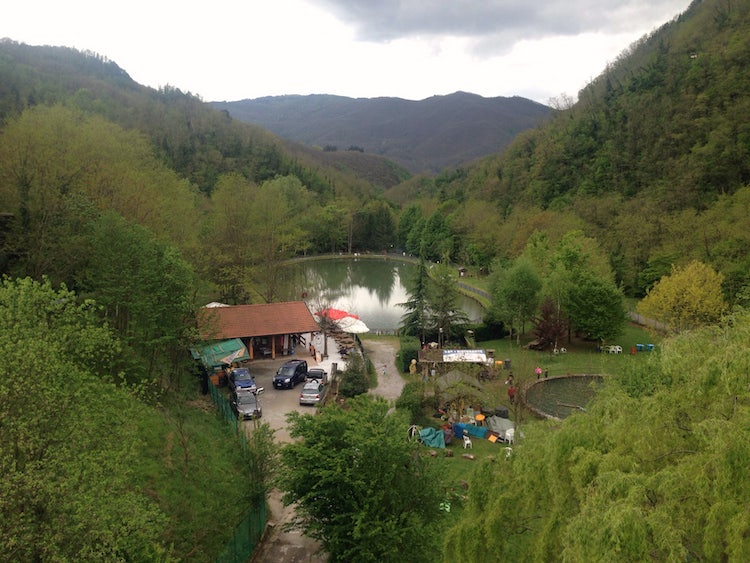