The Giostra dell’Orso in Pistoia

The grand tournament Giostra dell'Orso, or Joust of the Bear, takes place in the heart of Pistoia, in Piazza del Duomo, every July 25, on the feast day for the patron saint of the city, St. James.

The Joust is an exciting horse contest between the historical districts of Pistoia. For the occasion, the piazza is transformed into a large oval track surrounded by bleachers from which thousands of spectators arriving in town can enjoy the event (over 4500 visitors).

For tickets and details on attending the Giostra dell'Orso, you should contact the Pistoia tourism office at 0573 21622 (they speak English).

A bit of history

The Giostra dell’Orso has distant origins, even if the name officially just goes back to 1947. Already in 1200, according to documents still preserved today, knights and noblemen from various parts of Italy challenged each other to win the tournament's prize, called palio. The palio is often a cloth banner, not exactly precious in itself but for the prestige of winning it.

The Joust has always been tied to the city's celebrations in honor of St. James, patron saint for the city. In the Cathedral dedicated to Saint Zeno one can admire the precious altar made in silver where several relics of the saint are housed (called the St. James altar). 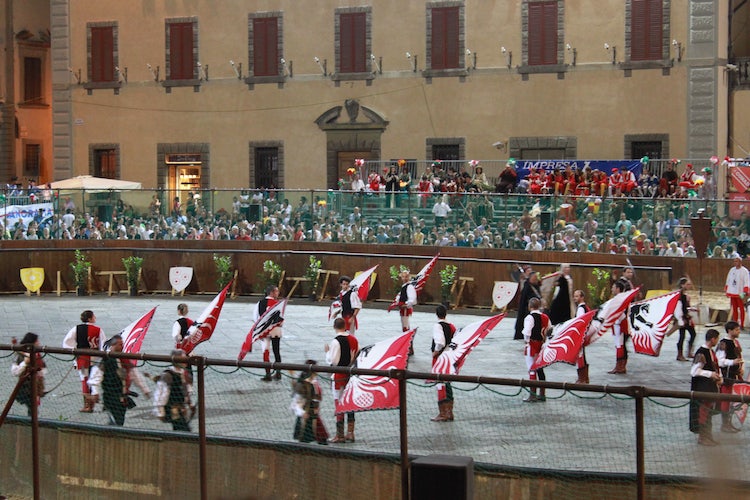 Since 1947, the Joust has been held in Piazza del Duomo which gets transformed into an oval shaped horse race track for the occasion, surrounded by bleachers for spectators.

If you're in the city in the days prior (remember that the main event is held on the evening of July 25), you might catch as the track is being set up and probably some of trails the afternoon of the main event.

The actual tournament is held in the evening, at 9:30pm, in Piazza del Duomo, but the celebrations pretty much take place throughout the day.

Starting in the morning at 9:30am, the various districts head to the Cathedral. From here, at around 10am, a historical parade starts and winds its way through the streets of the city, while at 11am a Mass in honor of St. James is celebrated in the cathedral. In the evening, around 8pm, the the various districts, including the knights and horses taking part in the tournament, participate in a procession through the city, ending in Piazza del Duomo.

The bishop of Pistoia then gives a blessing to all the participants and at 9:30pm the tournament begins!

Each district has 3 knights: each round is made in pairs, with each one seeking to hit the target that sort of resembles the shape of a bear.

There are 18 rounds total, the knight that runs the lap and hits the target before the other gets points. The district with the most points wins, of course. Points are assigned in this manner: 3 points for the first knight that “kills” the bear, 1 point for the second knight if he also hits the bear, and no points if the bear is not hit.

The rider that also earns the most points is proclaimed as the “Knight of the Golden Spur” while the winning rione is granted the Palio.

For more information on the history of the Joust, check out the official site. 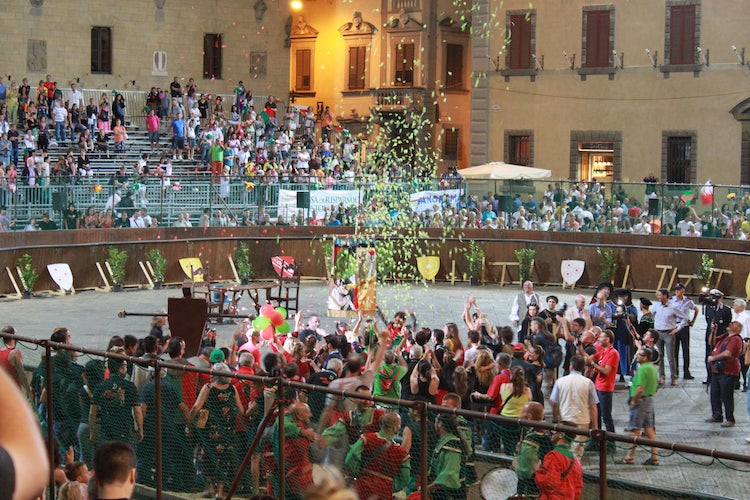 If you wish to see the Giostra dell’Orso, all you need is a ticket that you can buy in the days ahead of the tournament at the APT or tourism office in Pistoia, which is located right by the cathedral and Piazza del Duomo. If you arrive in Pistoia the day of the event, it is unlikely you'll find difficulty finding tickets since the piazza can hold lots of people.

There are two types of tickets: sitting on the bleachers and standing room. If you visit with kids, I highly recommend buying seats as they'll be able to see much better and will have a chance to rest.

How to get to Pistoia and the Joust

For the celebration of the city's patron saint, Pistoia puts on a full, busy day, definitely more "chaotic" than usual for the small town. The Joust of the Bear is not a show for tourists, the citizens of the town really love to compete against each other and enjoy the prestige of winning each year. The event, of course, also attracts many tourists, from nearby towns and further away.

If you want to attend the tournament, the easiest way to get to Pistoia is by train which takes you directly to the historical center minutes away from Piazza del Duomo. Read our article for detailed information on how to navigate the parking lots and trains.

The great think about Pistoia, it is the perfect size so don't worry, Pistoia the walk is never too long! 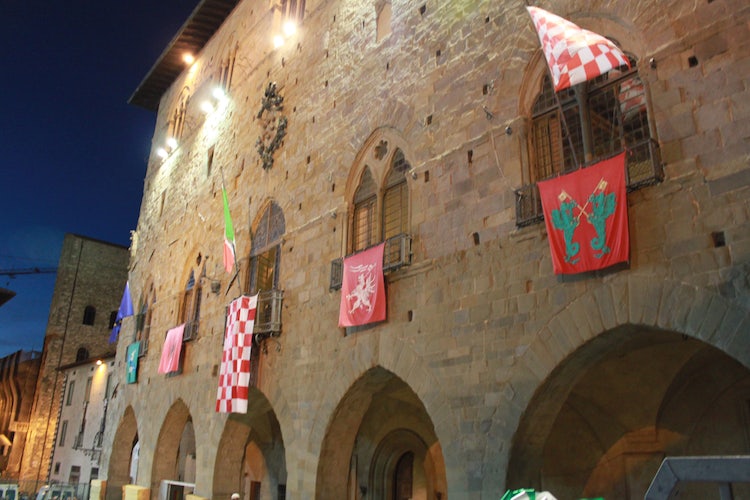